Five things we should do to protect the public from chronic crime and persistent offenders in the popular downtown corridor. 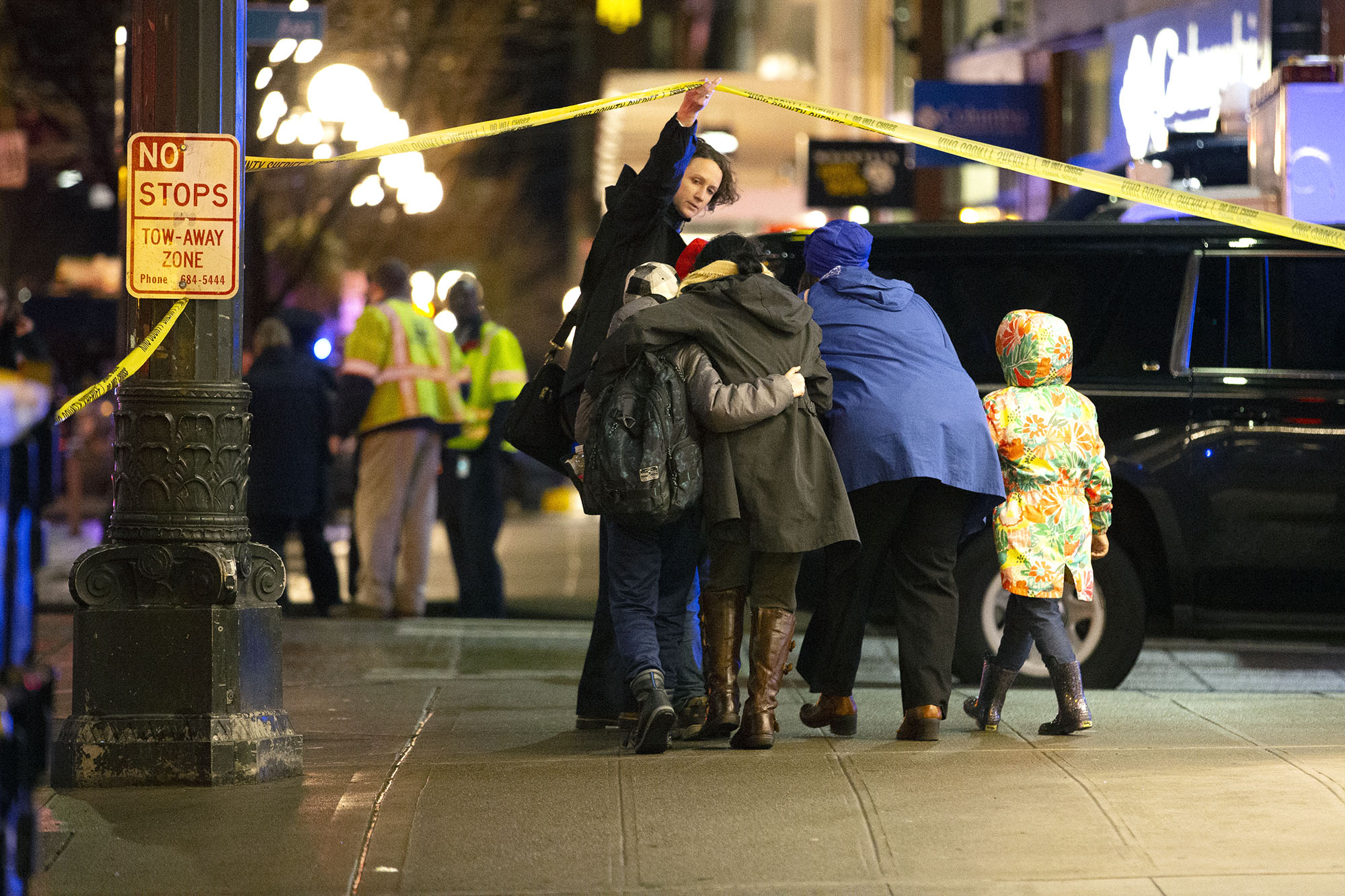 People are escorted by police away from the scene of a shooting at 3rd Avenue and Pine Street in downtown Seattle., Jan. 22, 2020. (Karen Ducey/Getty Images)

I’ve been thinking a lot about the violence last week in the core of downtown. I have felt anger, frustration and grief, topped off with irritation at the responses I’ve heard or read.

These responses ranged from excuses for why the shootings occurred to calls for a swift police “crackdown.” Scapegoating the poor, the homeless or the addicted will not move the needle on this issue; neither will an increase in police presence by itself.

Thankfully there is a third way, predicated on the science of policing, facts and an approach focused on specific solutions and truly helping people.

To be honest, I wasn’t surprised by the shootings because they were so predictable. The warnings signs have been there for years. The academic literature of criminology and policing, plus the lived experience of seasoned police officers, is loaded with forewarnings about the permissive environment that exists along Seattle’s Third Avenue.

As we consider what to do now, it is important to acknowledge the need for sweeping criminal justice and police reform, as well as new approaches to crime prevention. We must also acknowledge the tragic history of American policing, a history replete with racism, corruption, mass incarceration and failed responses to crime. But none of this requires us to ignore public health and safety. On the contrary, some of the people who most need help congregate along Third Avenue; they deserve to be as safe as anyone.

There are great risks to a city when two very specific policing challenges are ignored or minimized: chronic crime at specific places and persistent criminal offenders who are not held to account.

Sadly, if you talk to almost anyone who lives or works near, or regularly visits, the Third Avenue corridor between Union and Virginia streets, you will hear a very common complaint: City government has not solved the multiyear problem of rampant drug trafficking, organized shoplifting, violence and the presence of persistent offenders. As a result, Third Avenue has acquired a reputation for being dangerous, even though it is one of the most important places in our city in terms of transit services, tourism and business vitality. It has developed this reputation because of the two truisms in policing that require a strategic, holistic response — crime concentrated in specific places and persistent offenders who gather in these same places.

Crime is not uniformly distributed across a city. It’s concentrated and anchored in specific, microplaces, according to multiple studies. Researchers have found this to be true in Seattle, where over half of all reported crime occurs on just 5% of our city blocks. The same is true of the individuals who persistently commit crimes and disrupt neighborhoods; they concentrate themselves with razor sharp precision in places where the opportunities to commit crime are the highest.

So what should we do?

First, we need to acknowledge the truth about what has happened downtown. Last week’s shootings occurred because Third Avenue has long been a hotbed for crime — including crimes committed against victims who are homeless or otherwise vulnerable — and high frequency offenders.

Second, we must embrace proven policing strategies. This is hard work, requiring focused and consistent efforts aimed at specific individuals who cause the most harm, especially those engaged in violence. While certainly welcome, so-called “emphasis patrols” work only when officers keenly focus on those creating the most havoc, reducing opportunities to victimize potential targets. Our police officers are up to the task, but they need city and county prosecutors to share their focus and determination.

Some people — even as we seek reform and attempt to address the underlying causes of crime — need to be incarcerated for the grievous harm they cause. Some offenders don’t want help, don’t want to meet community norms and don’t want to change their behavior. Put these chronic offenders in jail, especially the violent ones, in order to protect everyone else.

Third, we need to stop conflating in our minds our police actions and our work to help those with addictions and mental health challenges. Both are essential, but the latter efforts fall far short. Take mental health. In Washington, it’s the state and county governments who are responsible to provide these services, yet they are woefully inadequate. City government should step up and invest in truly on-demand availability of these vital services. Seattle pays a very high cost while waiting for others to meet this urgent need.

Fourth, the Downtown Seattle Association has for years proposed physical improvements to the Third Avenue corridor, along with activation of public spaces much like the successful improvements at Westlake and Occidental parks. Let’s accelerate these physical and activation changes and improve safety in this important corridor.

Finally, let’s stop allowing ourselves to be paralyzed by the false conflict between compassion, on the one hand, and meeting basic public health and safety obligations on the other. It’s not one or the other, it’s both.