Democrats did well in Washington in 2018. They look even stronger in 2020

The most recent Crosscut/Elway Poll shows a widening gulf of support between the two major parties. 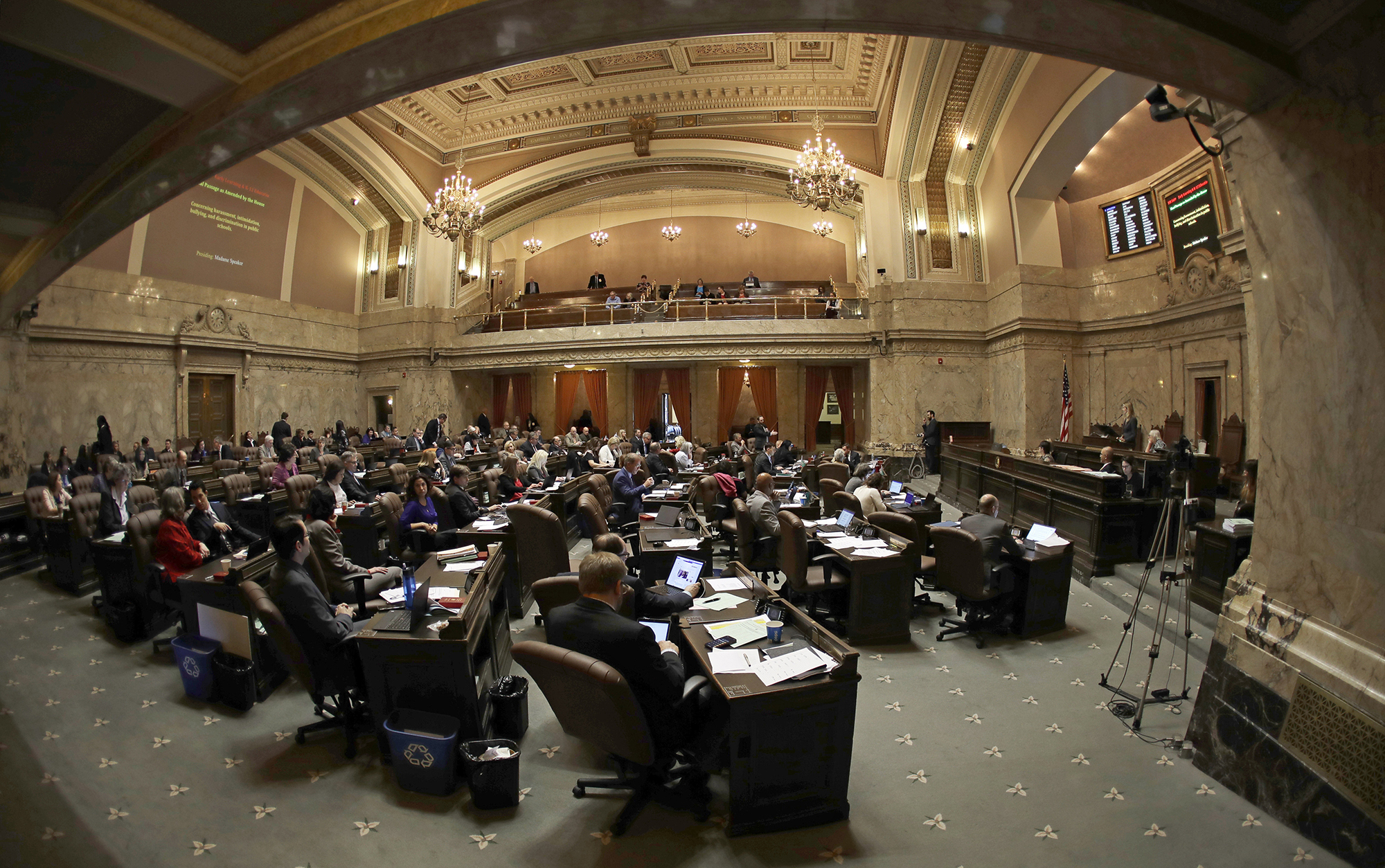 State representatives listen to speakers on the House floor at the Capitol in Olympia on April 9, 2019. Looking to 2020 elections, the Legislature will be a key factor in shaping where the state will go next. (Ted S. Warren/AP)

Have the Democrats hit their ceiling? Can the Republicans retake one of the houses or at least trim those Democratic majorities?

These questions will be answered in 122 separate contests 10 months from now, so a prediction at this point is folly. Yet voter attitudes at the beginning of the election year do provide a sense of the atmosphere in which the individual campaigns will be waged.

One measure of the political climate is party identification. Since Washingtonians don’t register by party, party identification is a little more variable and can serve as a kind of barometer of voter sentiment. The latest Crosscut/Elway Poll, fielded Dec. 26-29, shows a 17-point advantage for the Democrats in party identification: 41% said they would register as a Democrat if they had to; 24% said Republican. Last August, the gap was 20 points, the largest in the 28 years of polling. So only a slight improvement for Republicans.

Another tool in the pollster’s kit is the “generic ballot” question, which asks voters whether they intend to vote for Republican or Democratic candidates in the coming election for state Legislature.

By way of comparison, in January 2018, Democrats had a 13-point advantage in this question (46% to 33%). They went on to win 60% of all votes cast for state representatives across Washington in the November general election, capturing 57 of the 98 House seats.

In this year’s poll, Democrats had the advantage among all of the poll's demographic categories except Republican voters, legislative districts that Trump won in 2016, and Eastern Washington. Democrats led regardless of age, income, education level, or type of community. Among men, the parties were tied (43% each), but Democrats led among women by 61% to 28%.

The battle for the Legislature over the next few election cycles will be fought in these purple districts and, more broadly, in the suburbs, which is where the battle has been for a while now. Republicans long ago gave up fighting in Seattle. Conversely, there are no Democrats in the Legislature from Eastern Washington outside Spokane.

The contested districts have been in the areas between the large cites and the rural regions of the state.

A trio of indicators in this poll point to the difficulty Republicans will have gaining seats this year. First, voters who described their community as suburban gave Democrats a 30-point advantage in the generic vote for the Legislature.

Second, King County voters outside Seattle gave Democrats a staggering 48-point advantage in the generic election question. Two years ago, the January advantage in King County was just 18 points, and Democrats went on to sweep King County Republicans entirely out of the Legislature (except for a small corner of one district).

The upshot? Washington Republicans begin this election year leaning into headwinds that are even stronger than usual. Of course, political winds can change. Or it could be the microclimates in a handful of districts that determine whether Republicans can cut into Democrat majorities or whether Democrats increase their hold on the Legislature.

The story has been corrected to say there are no Democrats at all in the Legislature from Eastern Washington outside of Spokane.