As the company pledges $250 million more, a look at how its first $500 million has played out. 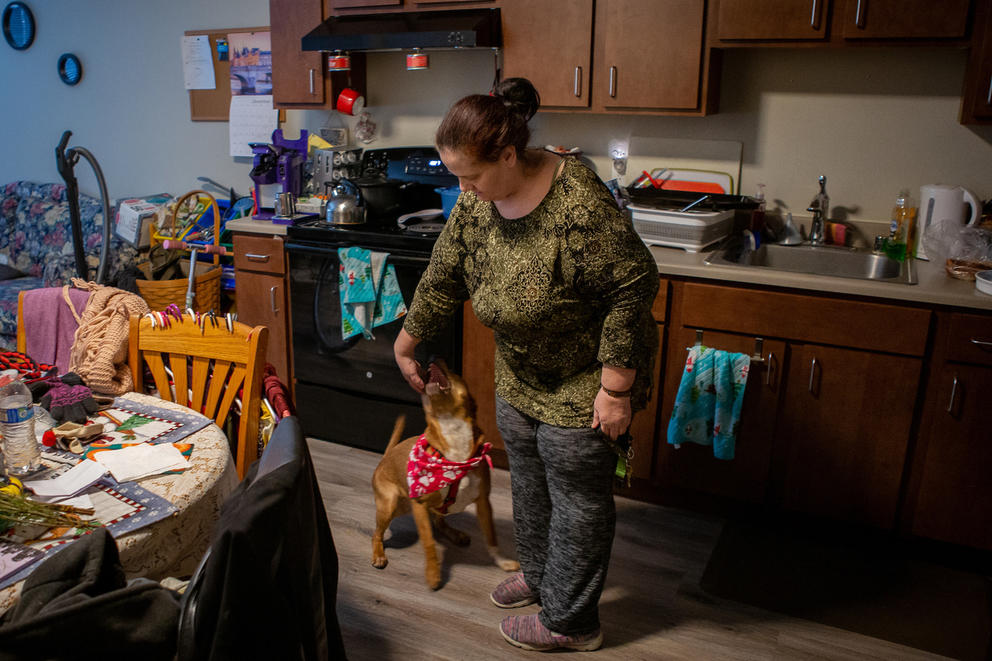 Christine German plays with puppy Carmela in the one-bedroom apartment she shares with her 15-year-old granddaughter in Bellevue on Jan. 15, 2020. Both were homeless and staying with a friend from church before moving into the affordable housing complex 30Bellevue when it opened in May 2019. (Jen Dev/Crosscut)

In late September, an investor bought five apartment complexes sprinkled throughout Kirkland, Bellevue and Federal Way. Such transactions barely raise an eyebrow in the churn of today’s white-hot Puget Sound real estate market, but this time the check wasn’t signed by a private equity firm. Rather, it was the King County Housing Authority that ponied up $245 million to acquire 1,029 units with the goal of keeping them permanently affordable.

Key to the housing authority’s acquisition? A $60 million loan from Microsoft.

The September deal was the first deployment of the $475 million revolving loan fund that the Redmond-based tech giant announced one year ago today to fund the creation and preservation of low-income and workforce housing in suburban King County. The aim was to make it possible for everyone, from the cleaning staff tidying up tech offices after business hours to the teachers educating programmers’ children, to live near the Eastside’s thriving job market.

In the lead up to Microsoft’s big announcement, which includes an additional $25 million in grants, the company did a deep dive on the data and best practices around affordable housing, which included consultations with the CEO roundtable Challenge Seattle. Former Washington Gov, Christine Gregoire heads that group and has dedicated much of her post-gubernatorial energy to addressing the challenge of providing so-called “middle-income housing” for families struggling to live near where they work, but earning too much to qualify for federal subsidies. She sees commitments like Microsoft’s as essential to meeting the missing middle.

“Thank goodness Microsoft put in what it did,” she told Crosscut last week. “It was game-changing.”

Microsoft’s move last January kicked off a trend among the Big Five tech firms, with Google in June and Facebook in October each pledging $1 billion to address California’s housing crisis. Apple then doubled down in November with a $2.5 billion commitment. Seattle-based Amazon has not made a similar pledge, but has donated over $40 million to social service nonprofits Mary’s Place and FareStart, as well as paying over $40 million to the city for affordable housing through real estate development fees.

On Wednesday, Microsoft announced that another $50 million from the 2019 pot will seed the new Evergreen Housing Impact Fund to invest in low-income housing in Eastside communities with the goal of creating some 1,250 units. All told, through grants and loans, Microsoft has invested $380 million and estimates that at least 6,671 affordable homes will be created or preserved.

There will be more from where that came, as Microsoft also announced Wednesday that it would be expanding its effort, unveiling an additional $250 million in the form of a line of credit to the Washington State Housing Finance Commission.

Reflecting on the first year of the company’s foray into the world of housing finance, Microsoft Philanthropies Director Jane Broom told Crosscut: “What we know now more than we did is that it really is complicated getting these deals to pencil out in communities when things are changing rapidly and where each city is different. We have a greater appreciation for the growth and rate of change that’s happening in our region and how that adds even more to the complexity."

As the Bay Area tech companies compete over who can write a bigger check, Microsoft has been quietly working the city halls of suburban King County and collaborating with a close-knit group of housing experts and advisers in an effort to loosen zoning and strategically invest in the types of real estate deals that may have fallen through without the company’s support.

Such was the case with the September deal, which involved one of the many configurations that affordable housing can take. In this case, since the 1990s, when Microsoft was the booming tech company blamed for driving up regional real estate prices, the King County Housing Authority has been purchasing so-called “Class B” apartment properties.  Think 25-year-old garden apartments populated by public school teachers and firefighters supporting a family on one salary, not fancy new high-rises with millennial coders making six figures. The authority holds the rent steady, with increases only as needed to keep up with operation and maintenance.

“We decoupled rental costs from the market,” the housing authority’s executive director, Stephen Norman, told Crosscut. “This decommodification of housing is a time-honored tradition in European social democracies.”

Between cash flow from those holdings and refinancing loans once the principal has been paid down some, the authority has slowly but steadily acquired more apartments, up to 7,000 now.

In the face of our housing market, the authority’s effort can feel noble but quixotic. According to a McKinsey & Company report due later this month, 100,000 affordable units in this “workforce housing” category have disappeared from metro Seattle since 2010.

One reason? King County’s booming real estate market has led private equity firms to swoop in and purchase these relatively cheap apartment complexes, jack up the rent, then sell them at a profit in a few years. A public housing authority struggles to compete with well-capitalized investors.

“We were running out of pools to refinance, and this is where the Microsoft money came in and made a critical difference,” Norman said. “Given acquisition costs, we had essentially hit a wall.”

This deal was a prime example of how Microsoft has approached housing finance: by seeking to plug a gap that might otherwise cause a deal to fall through.

“With some of these corporate pools, there is a tendency to jump on existing production bandwagons and put money into a pipeline that would happen with or without them and claim credit,” Norman said. For example, many banks already lend money through the federal low-income housing tax credit, which doesn’t apply to efforts like the housing authority’s purchase of those Class B properties. If Microsoft were simply offering up more tax-credit dollars, then their investment would only be growing an already available pool of funds rather than creating an entirely new financial product.

“To Microsoft’s credit, they are looking for ways in which they can provide dollars which are truly value added and move the needle,” he said.

Microsoft has recruited a brain trust of housing experts to vet deals, from the company’s investments and real estate teams to the national housing nonprofit Enterprise Community Partners and Faith Pettis, co-chair of Seattle’s Housing Affordability and Livability Agenda. They hoped to demonstrate that a private company can make a philanthropically minded but fiscally responsible investment in housing.

“The deal was a template for a long-term engagement with the corporate community — whether Microsoft or a broader team of corporations with skin in the game,” Norman said. Yet no other Seattle-area corporation has made a similar commitment. Whether they will, he said, “is an open question.”

The company’s investment has also raised broader philosophical questions about who is responsible for ensuring that a region’s residents can afford a decent place to live near where they work.

“While the corporations have a role to play, ultimately this issue of the failure of the market to provide a sufficient supply of affordable housing is a government issue,” Norman said. While he believes primary responsibility rests with the federal government, the Trump administration has largely retreated from affordable housing, leaving states and local governments to fend for themselves.

To that end, Villette Nolon, CEO of Imagine Housing, an affordable housing developer on the Eastside, has begun hearing increased chatter about a possible King County housing levy, a prospect she called unthinkable five years ago. Such a measure could go a long way toward balancing the disparity between Seattle, which spends heavily on affordable housing, thanks to a 2016 housing levy, and the more parsimonious suburbs.

According to data compiled by the King County Housing Authority, in 2017 Seattle spent $127.93 per capita on affordable housing through its Office of Housing, while the 15 suburban King County cities that are part of ARCH, a quasi-public housing agency, spent on average $9.38 per capita from 2012 to 2017.

“A levy would make a world of difference,” Nolon said. “There’s a lot of land on the Eastside, but there isn’t any money to develop it if you rezoned it.”

While Microsoft's Broom did not comment on whether the company would support a housing levy, Gregoire was warm to the idea, though specifics would require getting the state Legislature involved.

“We can’t spend money and call it a day,” Gregoire said. “This is going to be a long, long haul.”

Correction: An earlier version of this story misidentified the source of a workforce housing report. The report was prepared by McKinsey & Company. The story has been corrected. 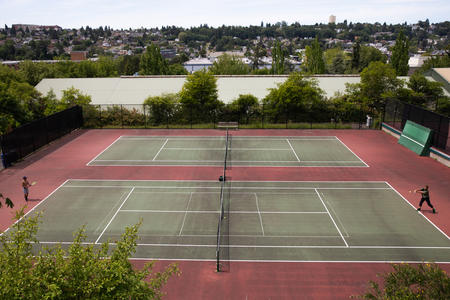