A new poll shows lukewarm approval for the governor, but he is still well ahead in his 2020 reelection bid. 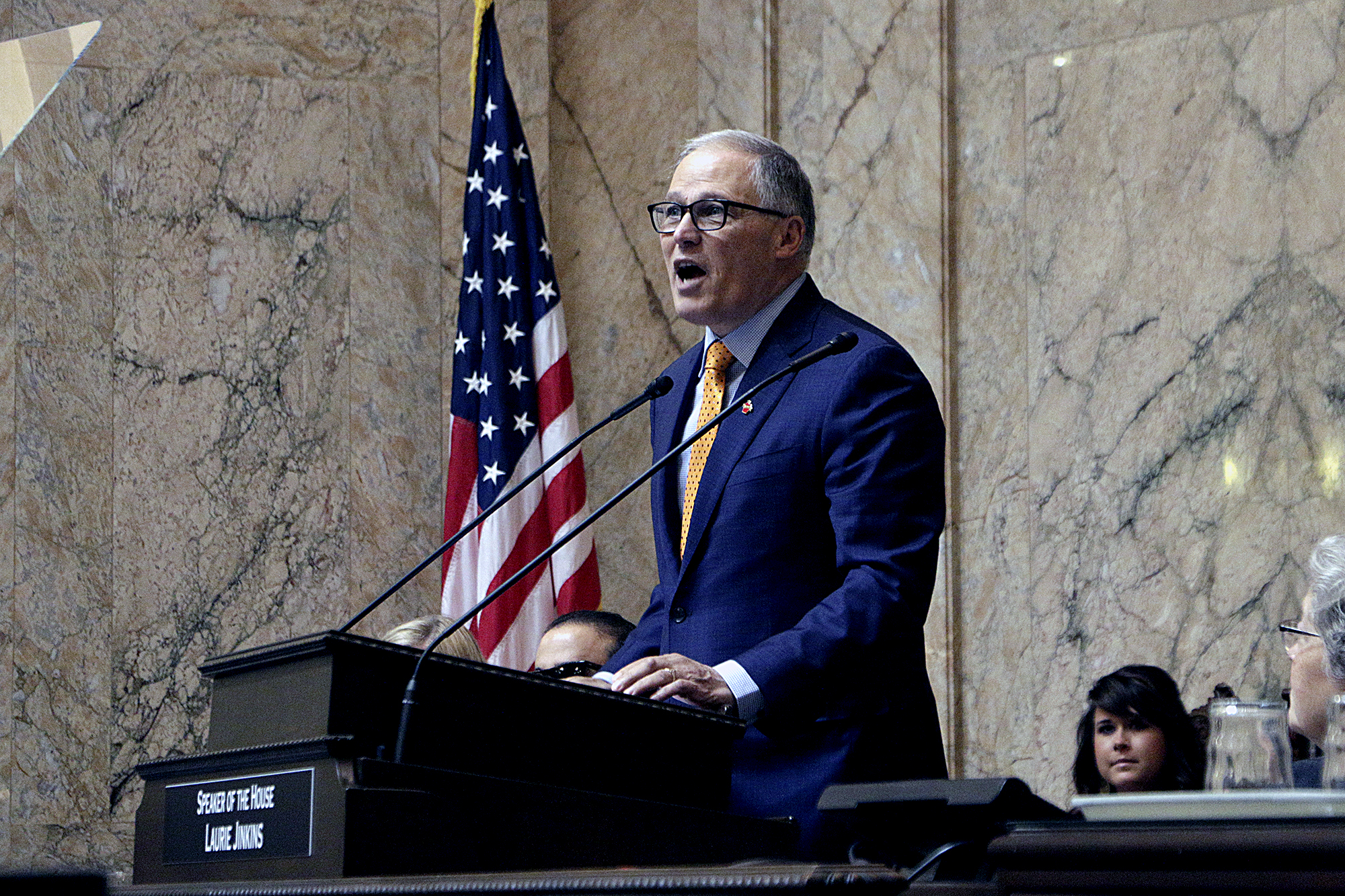 Washington Gov. Jay Inslee delivers his annual State of the State address to a joint session of the state Legislature, Jan. 14, 2019, in Olympia. Inslee said homelessness is a "growing crisis" and told lawmakers the state must act now to reduce the number of people who are living without permanent shelter. (Rachel La Corte/AP)

Gov. Jay Inslee delivered his annual State of the State address in Olympia on Tuesday, outlining his key priorities for Washington as the 2020 Legislature begins.

Inslee highlighted three main areas where he hopes to see the most success: training for midcareer workers, tackling homelessness and establishing a clean fuel standard.

He also touched on a few other “tasks” he believes the Legislature needs to address, including increasing access to early learning opportunities, passing “common-sense” gun safety measures and improving help for foster care children.

The governor’s biggest goals for the session somewhat reflect what respondents to a recent statewide Crosscut/Elway Poll said they would like to see the Legislature focus on this year. Homelessness was the No. 1 issue for 31% of respondents.

“To be successful, our response level must match the scope of this crisis,” said Inslee. “Homelessness is a statewide problem and it needs a statewide response.”

The Democratic governor stressed the importance of prevention, rent assistance and supportive housing in responding to homelessness. Inslee acknowledged a “strain” on compassion and patience but urged Washingtonians to not grow “cynical” or “discouraged.”

While the effort to tackle the issue is seeing bipartisan support, the proposed method of paying for the crisis is not. Inslee’s plan includes using $319 million from the state’s “rainy day” fund, a move that some Republicans disagree with. Inslee would need a 60% majority vote from the Legislature in order to use the emergency funds.

“Even if his plan works, we’ll be right back here in 2023 trying to find a more sustainable path forward,” said state Rep. Drew Stokesbary, R-Auburn. He compared the governor’s approach to funding the homelessness crisis to “kicking a can down the road.”

Stokesbary added that “more state investment isn’t sufficient.” He said he doesn’t believe that someone working from an office in Olympia knows what’s best to combat individual communities’ homelessness issues.

Democrats, who control both chambers of the Legislature, expressed doubt last week that they could get enough Republican votes to enact the governor’s plan. 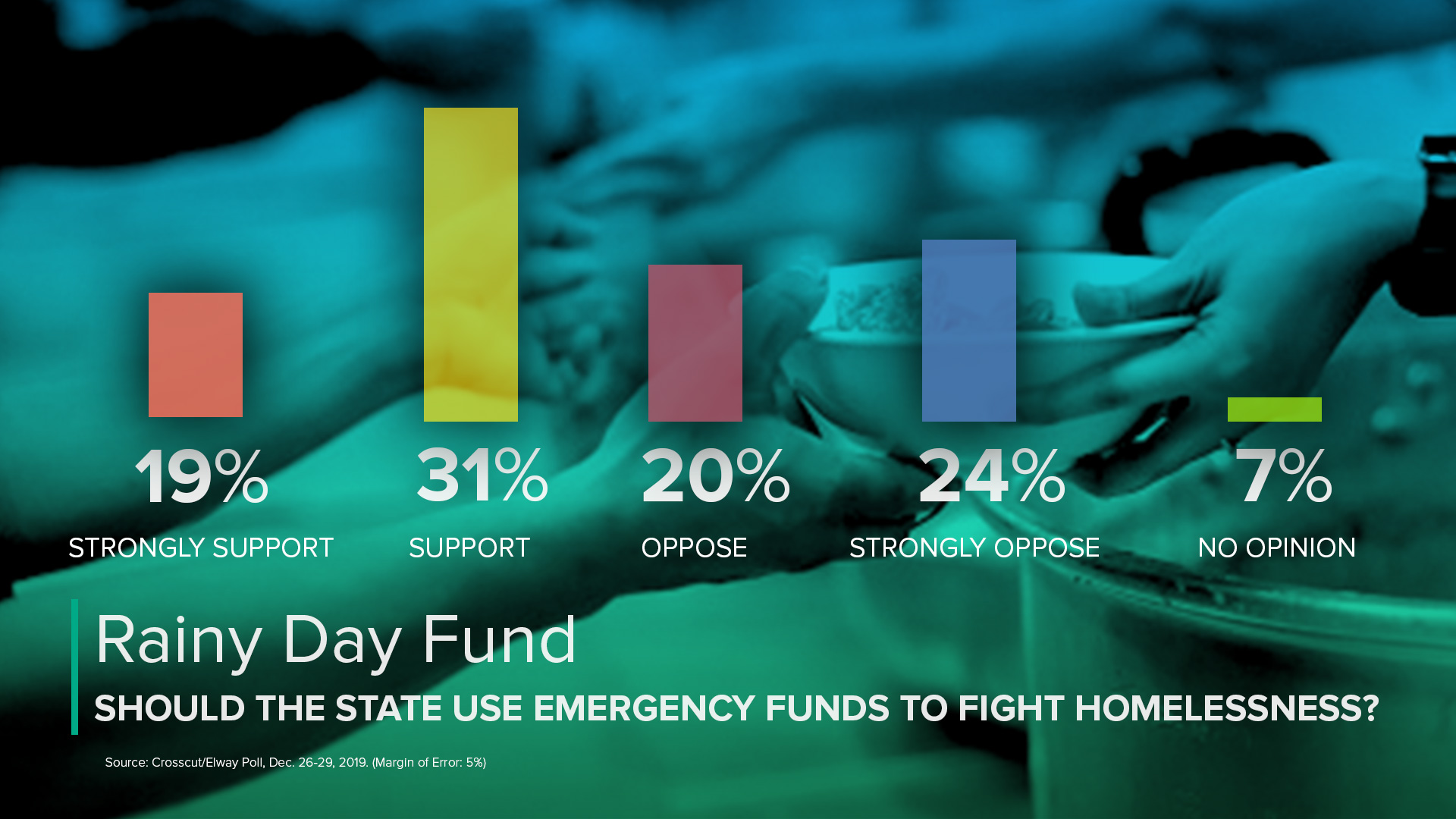 Voters, too, are split on Inslee’s idea of dipping into the rainy day fund. Overall, 50% of the Crosscut/Elway Poll respondents supported the governor’s proposal, which Inslee said would help reduce the number of people living outside by about half during the next two years. The poll, released last week, surveyed 405 voters from around the state.

The poll isn’t clear whether respondents think career training is an issue that legislators need to address, but 15% of respondents said the Legislature should also focus on the environment.

Inslee’s speech Tuesday noted that he will again support legislation to establish a clean fuel standard. Attempts to pass a statewide standard failed in the Legislature last year.

“We need what the rest of the West Coast has already built: a clean fuel standard that calls upon the oil and gas industry to give Washington consumers cleaner fuels,” Inslee said.

Inslee said that about half of the state’s emissions come from the transportation sector and that adopting a clean fuel standard “is an extremely effective tool available to us to reduce transportation emissions.”

It’s a plan also supported by a majority of Washington voters, the Crosscut/Elway Poll results suggest. Sixty-six percent of poll respondents said they “generally support” a requirement for gas and other fuel companies to reduce their carbon emissions.

But Senate Minority Leader Mark Schoesler, R-Ritzville, argued that the governor’s proposal was nothing more than a “gas tax without roads.” He said that passing a clean fuel standard would increase the cost of gas without providing any additional transportation projects, despite Inslee’s claims otherwise.

Washington would join California, British Columbia and Oregon if the state enacts a clean fuel standard that aims to curb emissions from vehicles.

“Washington state is not a state of climate denial,” said Inslee. “For those who say we shouldn’t take action, I say climate inaction is just as deadly as climate denial.”

Voters appear to support some of Inslee's other priorities as well. For instance, 65% of poll respondents said they would support regulating or banning high capacity magazines for guns. While Democrats have expressed interest in advancing a high-capacity magazine ban this year, minority Republicans are likely to oppose the legislation, viewing it as an erosion of gun rights.

This year’s legislative session, which started Monday, is scheduled to last 60 days.

After the Legislature adjourns, Inslee plans to shift his focus to campaigning for a third term as governor. Washington hasn’t had a governor serve three terms since Republican Dan Evans, who held the position from 1965 to 1977. 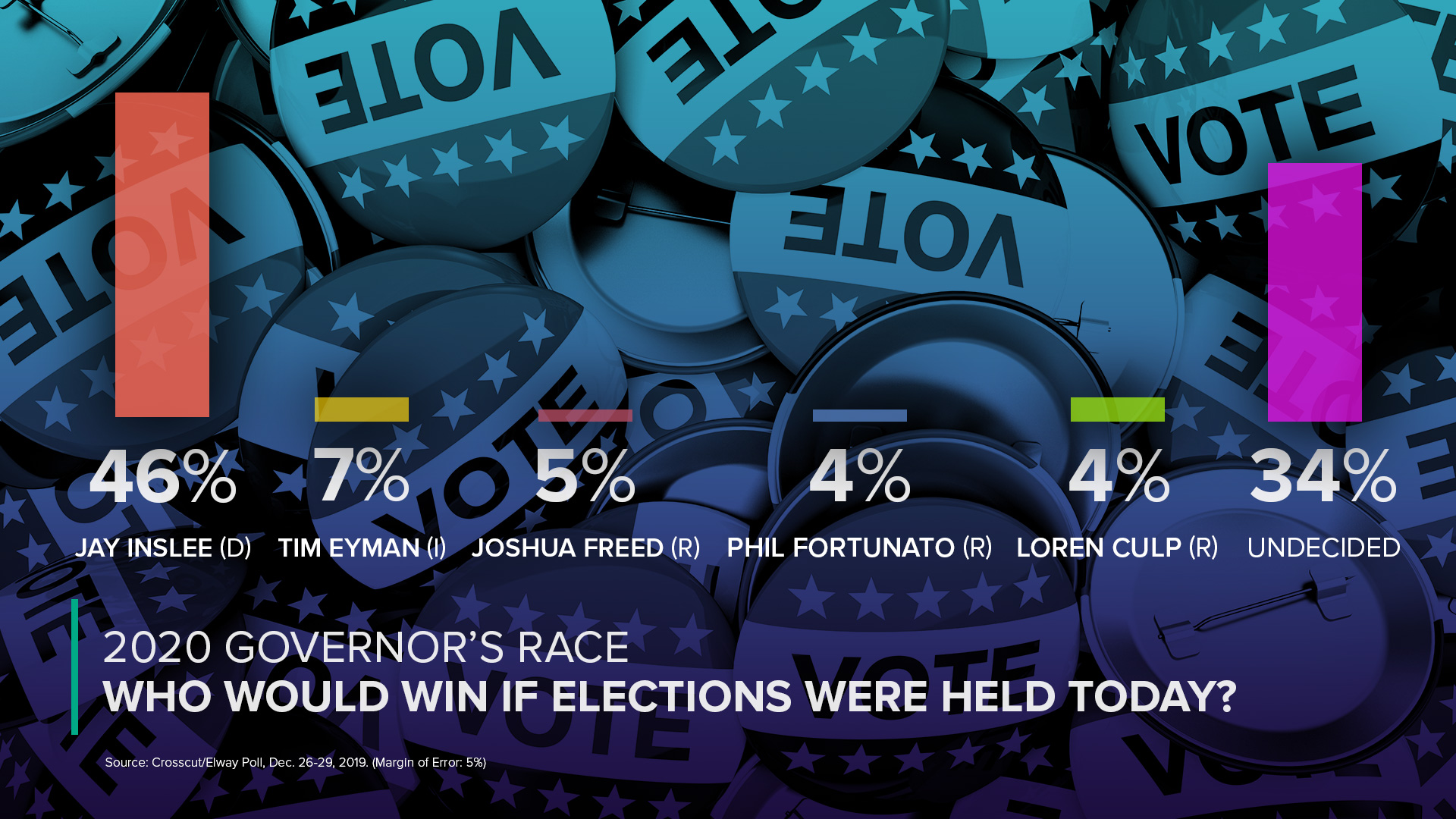 In the poll released last week, Inslee’s approval ratings were lukewarm. Only 37% of poll respondents thought he was doing an “excellent” or “good” job managing state government and providing leadership to the Legislature. Fifty-seven percent of those surveyed, meanwhile, gave him a negative approval rating.

Yet Inslee still appears to be far ahead of the competition when it comes to his chances for reelection. Forty-six percent of those surveyed said they would support Inslee if the 2020 election were held in late December, when the poll was conducted.

By comparison, only 7% said they would support Tim Eyman, a conservative initiative promoter who recently announced he would run for governor as an independent. (Eyman is now toying with running as a Republican instead).

About one-third of those surveyed — 34% — said they were undecided in the governor’s race.