No consensus has emerged about whether to expel the GOP lawmaker from the state House, a rare form of discipline. 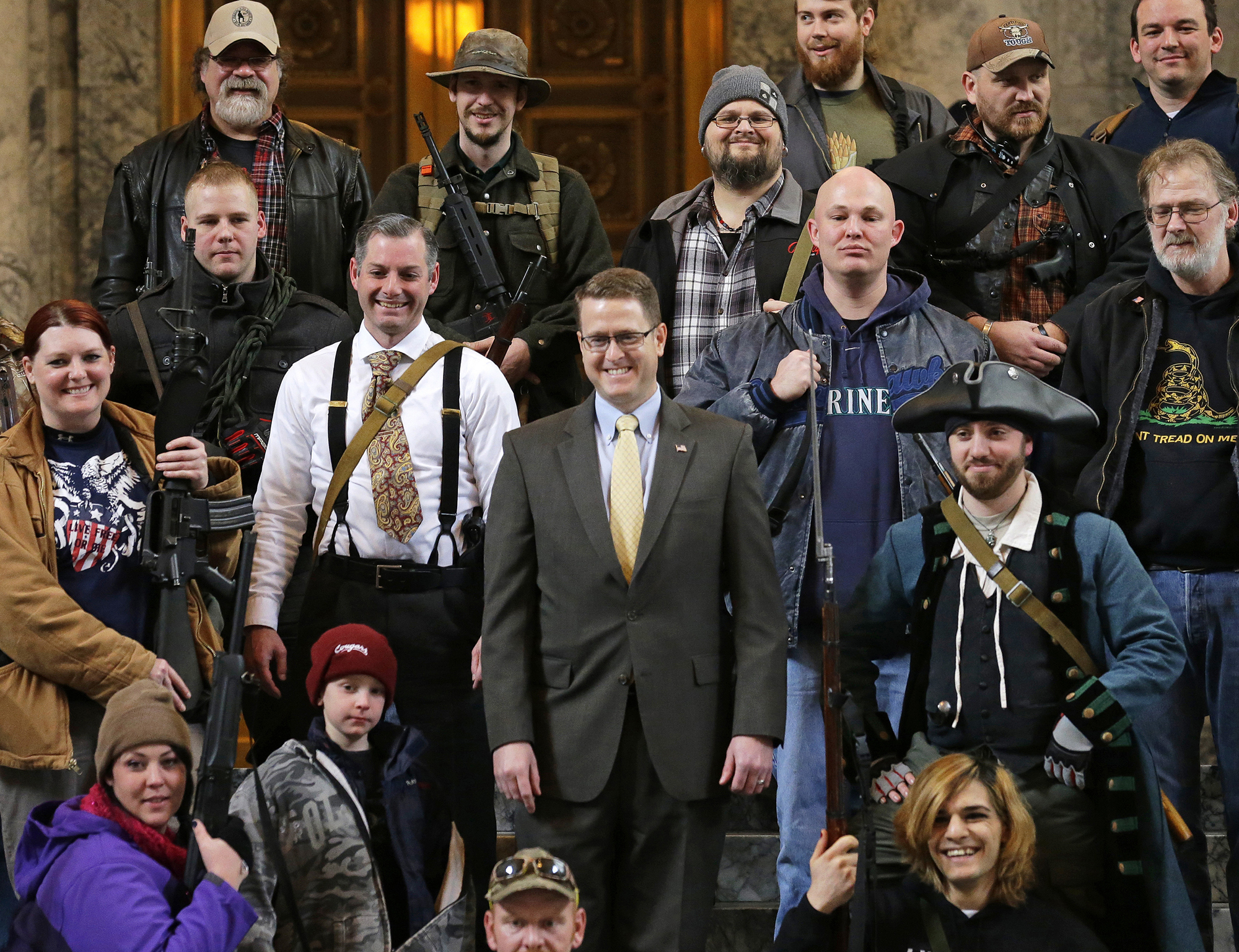 In this Jan. 15, 2015, file photo, Washington state Rep. Matt Shea, R-Spokane Valley, center, poses for a group photo with gun owners inside the Capitol in Olympia, following a gun-rights rally. An independent investigation recently found that Shea played a role in three armed conflicts against the U.S. government, leading some to question whether he should remain in office. (Ted S. Warren/AP)

As Washington lawmakers prepare to return to Olympia next week, they are still debating whether to remove state Rep. Matt Shea from the Legislature, following a report that accused the Spokane Valley Republican of taking part in domestic terrorism.

Two Democratic House leaders said they think the recent findings against Shea merit expelling him from the House, a penalty that has been imposed only once in state history.

But such a move would require a two-thirds majority vote — meaning that at least nine House Republicans would have to join the chamber’s 57 Democrats in agreeing that Shea needs to go.

Crosscut reached out to more than a third of House Republicans in recent days to ask them their thoughts on expelling Shea. Of the seven GOP lawmakers who responded, none said they had decided they would vote to expel Shea from the House.

Already, Shea’s Republican colleagues have kicked him out of their closed-door, internal caucus meetings and stripped his name and photo from their website. Shea is also being removed from three committees on which he serves.

Wilcox said he is wary, however, of voting to remove a legislator who was elected by thousands of voters.

Shea, a lawyer who represents Spokane Valley’s 4th Legislative District, first won election to the House in 2008. Voters have reelected him four times since.

An independent investigation, which was publicly released Dec. 19, found that Shea helped plan the 2016 takeover of the Malheur National Wildlife Refuge in Oregon. The four-month investigation also found that Shea played a role in two other armed conflicts against the U.S. government, including by recruiting armed militia members to oppose federal law enforcement agents.

Beyond that, the investigation concluded that Shea, a leader in the anti-government Patriot Movement, “condoned violence and intimidation” of his political opponents.

Shea has not responded to requests for comment, but he posted on Facebook last month that he “will not resign.” On social media, Shea has called the investigators’ report “a sham investigation” and said he was denied due process.

For his part, Wilcox said he was disturbed to read that Shea “had a hand in planning these armed confrontations, where plenty of innocent law enforcement officers were put at risk.” Wilcox said that’s why he thinks Shea should step down.

At the same time, though, Wilcox said he believes “membership in the House should be between a member and the voters.”

“We’re all here for the voters,” Wilcox said late last week. “And so we should also handle this in a way that gives the maximum amount of respect to the voters in that district.”

“At this point, I have yet to be convinced that there should be an expulsion,” Wilcox said.

State Rep. Laurie Jinkins, the incoming speaker of the House, has a different view. The Tacoma Democrat said she thinks the findings against Shea merit a vote to expel him from the chamber — though she said she’s not yet sure how many of her Democratic colleagues share her opinion.

A conversation with House Democrats on that topic will most likely happen shortly after Jan. 13, when the Legislature convenes for a new, 60-day session, Jinkins said.

“Everyone I have talked to is outraged, but I think people are a little stunned by the behaviors,” Jinkins said Thursday. “So folks are really trying to think through: What is the process we would go through? What is the right thing to do?”

Jinkins, who previously worked as a lawyer with the state Attorney General’s Office, said she disagrees that a decision to expel a legislator would negate the will of the voters.

To Jinkins, Shea’s expulsion-worthy offense is not that he engaged in political speech that people disagreed with or found repugnant, she said. It’s that — according to the investigators’ report — Shea took action in ways “very highly related to violence,” Jinkins said.

“That crosses a line that is unacceptable for anyone, let alone someone who is an elected official,” she said.

Others think that unless Shea is tried and convicted, the Legislature shouldn’t take further action against him.

“Until that has taken place, and all the evidence has come forward, and Matt Shea has been found guilty of the charges he is accused of in a court of law — by a jury of his peers — I would not support his expulsion,” said state Rep. Brad Klippert, R-Kennewick.

House officials said they forwarded the outside investigators’ report to the FBI and the U.S. Attorney’s Office. A spokesperson for the FBI field office in Seattle confirmed the office had received the report, but declined further comment. George Jacobs, a spokesperson for the U.S. Attorney’s Office in the Eastern District of Washington, similarly said the office "cannot confirm or deny the existence of an investigation" into Shea.

Some Republicans said they are still looking over the investigators' report and weighing what they think should happen next.

“I am rereading the report right now,” said state Rep. Joe Schmick, R-Colfax, who noted no formal charges have been filed at this point against Shea.

“Quite frankly, anytime that we deal with charges of this serious nature — and it doesn't matter if it’s a Republican or a Democrat — we have to allow due process to take its course,” Schmick said. He said he didn’t think he should comment further about what actions should be taken until he had finished reading the report a second time.

State Rep. Michelle Caldier, R-Port Orchard, said she hasn’t decided how she would vote if a motion to expel Shea came to the House floor. Late last week, she said she had been spending time with family for the holidays, and had been focused on that instead.

“I will address whatever comes my way when session starts,” Caldier said.

GOP state Rep. Dan Griffey, R-Allyn, wrote in a text message that he had not decided to vote to expel Shea "as of this time;" meanwhile, Republican state Rep. Norma Smith of Clinton said that, because a motion to expel has yet to come formally before the House, "I don't believe I can speak to that issue."

Others rallied more forcefully to Shea's defense. In a statement Friday, state Rep. Jesse Young, R-Gig Harbor, called for Republicans to be united in opposing "any formal House legislative action" against Shea, until Shea "has had due process to defend himself."

"We take an oath to uphold due process rights, and at a minimum Rep. Shea should be allowed equal time to respond and defend himself as it took to produce the accusatory report," Young's statement said.

According to the investigators' report, Shea did not respond to multiple requests to be interviewed as part of the monthslong inquiry.

Some of Shea's supporters think the disciplinary actions against him have already gone too far. During a rally in downtown Seattle on Sunday, Joey Gibson, the leader of the far-right group Patriot Prayer, criticized Wilcox's decision to suspend Shea from the Republican caucus, The Seattle Times reported.

According to The Times, Gibson characterized Wilcox's action as "throwing Shea under the bus."

At the same rally, Joseph Brumbles, who is running as a Republican for lieutenant governor, labeled Wilcox a “tyrant” who has perpetrated a "traitorous assault” against Shea, the Times reported.

Wilcox has responded to such criticisms by saying he is doing what he thinks is best for the state and the House Republican caucus.

Partly because expulsion votes happen so rarely, the way forward is not clear, even to those who personally support taking such a step.

State Rep. Marcus Riccelli, a Spokane Democrat who serves as the House majority whip, said he would vote in support of removing Shea from office. “There’s no place for hate, and there is no place for these kinds of actions — and he needs to be held accountable for them,” Riccelli said.

Even so, questions remain. For instance: If House Democrats decide they want to expel Shea, what proceedings would need to take place prior to the final vote?

Jinkins said the House would probably want to conduct hearings before taking any final action, though the precise format would be open for discussion.

Another question: Because Shea has been kicked out of the House Republican Caucus, he will lose his current seat on the House floor, which is nestled amid other Republicans. But where, exactly, does the House put him now?

Griffey, who is the House Republican whip, said that while Shea has already been moved to a Capitol office designed for less senior members, the location of his seat on the House floor is still being decided.

What is clear: Democrats probably won’t want to sit next to Shea, either.

“I don’t think they get to pick him up and put him in the midst of a bunch of Democrats,” said Jinkins, when asked about where Shea would get moved. “That would be shocking to me.”

But, added Jinkins, who was only recently selected to become House speaker: “There are a lot of shocking things that have happened in my short tenure.” 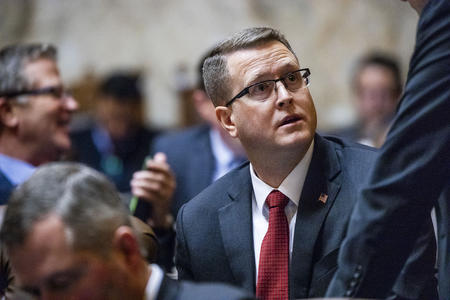