Almost six months after House Bill 1874 passed, parents, doctors and teens are applauding the bill for integrating care into the family. 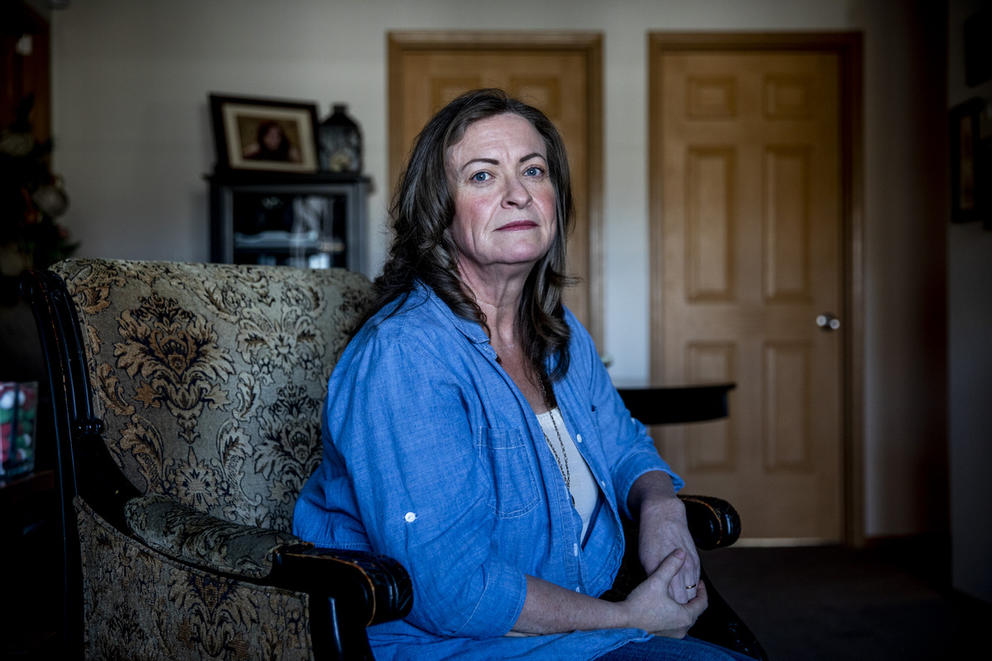 Penny Quist in her Ephrata home on Jan. 3, 2020. Quist’s son is receiving mental health services after being bullied and then becoming a safety risk to himself and others. A new Washington state law, House Bill 1874, that went into effect in July has given Quist more authority and involvement in her son’s care. “It is completely encompassing of healing,” Quist says. “You can’t treat the individual without treating the family.” (Dorothy Edwards/Crosscut)

For more than two decades, Washington state has allowed adolescents age 13 and up to get mental health services without a parent’s consent. Now lawmakers have changed state law to restore some authority to parents, who have begged for more involvement in their children’s mental health care.

Parents and guardians are celebrating House Bill 1874, which went into effect in July. Until the new law, parents often were shut out of their teenager’s care and treatment plans and couldn’t push a teen toward necessary outpatient or inpatient care without their consent.

The primary advocate to push the new law forward was Peggy Dolane, a parent of two children with mental health needs: her 18-year-old daughter and 20-year-old son.

In 2016, she approached Washington state legislators to instigate change around the old 1985 bill and was joined by multiple families concerned about their children’s mental health care.

Dolane says there needed to be some middle ground. While it was important teens are able to access treatment without their parent’s consent, the old law had the opposite effect when those teens wouldn’t accept treatment.

“We had become so youth empowered [that] the youth could refuse to do any kind of treatment,” Dolane says. “Imagine parenting under this environment and this view that 13-year-olds can make their own mental health decisions. That’s why I said I had to do something about it.”

Dolane says her daughter was estimated to be 5 years old emotionally when she was an early teen, before the law changed, and Dolane didn’t have the access to care for her daughter that she wanted.

Her relationship with her children was undermined once they turned 13.

“I couldn’t form a relationship with the child’s therapist because it was only allowed to be one way. Once my children said, no, they didn’t want me to know what was going on or have me participating in any way,” Dolane says.

She believes the best results come when parents and other family members are involved, and parents can have a relationship with the therapist.

Under the new law, teens can still admit themselves for inpatient treatment, but now there is also parent-initiated treatment. The guardian can request care for mental health or substance abuse disorders without consent of the minor, either in admission, evaluation or treatment for inpatient care or counseling for outpatient care.

Teens still have rights when it comes to their medical records. Those details aren’t freely given. In cases where health and safety are at risk, it is up to the discretion of the provider to share medication and treatment reviews. The teen will be notified of the disclosure ahead of time. Parents now have access to treatment plans, medication suggestions, psycho-education on the child's mental health and parenting strategies.

This has made a world of difference for Penny Quist, a mother of six children. She has lived in Ephrata, a small town in Grant County east of Ellensburg, for 17 years. One of her sons, who wishes to remain anonymous, experienced bullying at school, so Quist put him in counseling.

What started as issues from bullying snowballed into more severe mental health issues, where her son was a safety risk to himself and others.

She says Grant County has limited resources for teens with more extreme mental health needs. The county, alongside the two bordering Grant, have no mental health beds available. She had to drive him an hour away to Wenatchee for an emergency crisis appointment. She was then referred to another crisis response team at Wenatchee Valley Hospital, where they sent him to an inpatient care facility for 28 days.

Quist says on one occasion there were no inpatient beds available for her son, so he was put into an Alzheimer’s unit in Wenatchee because it was the only available locked-down facility. She and her son frequently drive out of Grant County for care, going to Seattle and Wenatchee for specialty services.

He is currently at the treatment center for children in Lakewood, receiving the “intensive care that he’s needed for years,” she says.

After going through years of trying to access appropriate treatment under the old law, Quist was left out of the picture. Previously, she had no idea about his progress in counseling or if he was even participating in sessions.

“I kept wanting to speak to this counselor about what was going on, and I just kept getting shoved off,” Quist says. The old state law allowed the counselor and her son to keep her out of the loop.

“Because of that, a lot of things were missed,” she says. “You cannot heal the child without healing the family. When a child is in crisis, the entire family becomes in crisis.”

At the Child Study and Treatment Center, staff involve parents in their child’s dialectical behavior therapy, a popular form of psychotherapy. The therapy has helped the whole family, Quist says. Her son’s goals have become the family’s goals.

Quist says because her voice is now heard, it enables her son to move forward.

“I feel like I can reach out to his counselor and be like, there was this interaction that didn’t go so well. Where did I go wrong? How could you help guide me through this with him?” she says.

Another concerned mother was Michelle Landwehr, who testified before the House Human Services and Early Learning Committee in February 2019 alongside her 16-year-old son, Alex. She asked members of the committee to imagine their child had a life-threatening medical condition, only to have doctors withhold that information from you as a parent.

When her son didn’t consent to treatment at 13 years old, she said she very nearly lost him.

“No child, especially one in the throes of mental illness, should ever have to shoulder such a burden,” she said.

In his testimony, Alex said he didn’t know what he needed back when he was younger and struggling with severe mental health problems.

“When I was in a really bad place, I didn’t know what was best for me. I was terrified,” he said. “Now that I’m on the other side of that, I can see that, while I would have hated having my parents in charge of my care as a younger person, it would have saved me and my family a lot of suffering and pain. This bill is a compromise that we need.”

Even though the bill passed, education around the legislation is still shaky.

“There was a thread just the other day on Facebook and this mother was crying out that she couldn’t get her 15-year-old care,” Quist says. “She was told that she couldn’t make him go [to get mental health care]. I was like, excuse me, this is the law. Even the provider wasn’t abiding by it or aware of it.”

Kathy Brewer, manager of psychiatry at Seattle Children’s hospital, where Quist’s son was treated, is fielding a lot of questions about implementation of the new law.

Knowledge is slow to get out in both providers and families, she says. There are several aspects to the bill, but Brewer says the most misunderstood one is release of information.

“Providers in Washington state are still stuck on this idea that 13-year-olds have to sign a release of information for a therapist to talk with a parent, and it’s just not true,” Brewer says.

She says this leads to a lot of frustration with caregivers, as well as providers, because it “slows down the process.”

She’s had several large providers ask her to clarify the bill’s release-of-information aspects. She also sees their hesitancy in following the bill’s mandate. At Seattle Children’s, Brewer says the bill knocks down barriers that they had to hurdle over before.

“We just kind of breeze by that now. You don’t have to agree, it’s OK. Your parents can agree for you,” Brewer says.

Like other providers and parents working under the bill, she’s unclear as to who is supposed to provide education on the issue.

The Washington State Hospital Association hosted a webinar and invited member hospitals to participate, although it was voluntary. Brewer co-facilitated another one for state employees and a second one for parents, but she says it wasn’t well enough attended to achieve the reach they hoped for.

Education about the new law is particularly difficult in rural areas, where the same crisis response team may care for both minors and adults.

But despite the challenges around implementation, Quist is optimistic about the new law's potential impact.

“That bill is going to change the tide of mental illness: supporting the entire family, the caregivers and the child, because it doesn’t just affect that child. It affects the entire family,” Quist says. “That bill allows for the family to be treated. Not just the individual.”

Why Black therapists are hard to find in WA

People hoping to find a Black therapist who can empathize with their experiences may come up short in their search.

Consumers want, and governments demand, less of the non-biodegradable substance. These manufacturers are looking for alternatives.

Emily McCarty is the former Central Washington Reporter for Crosscut.