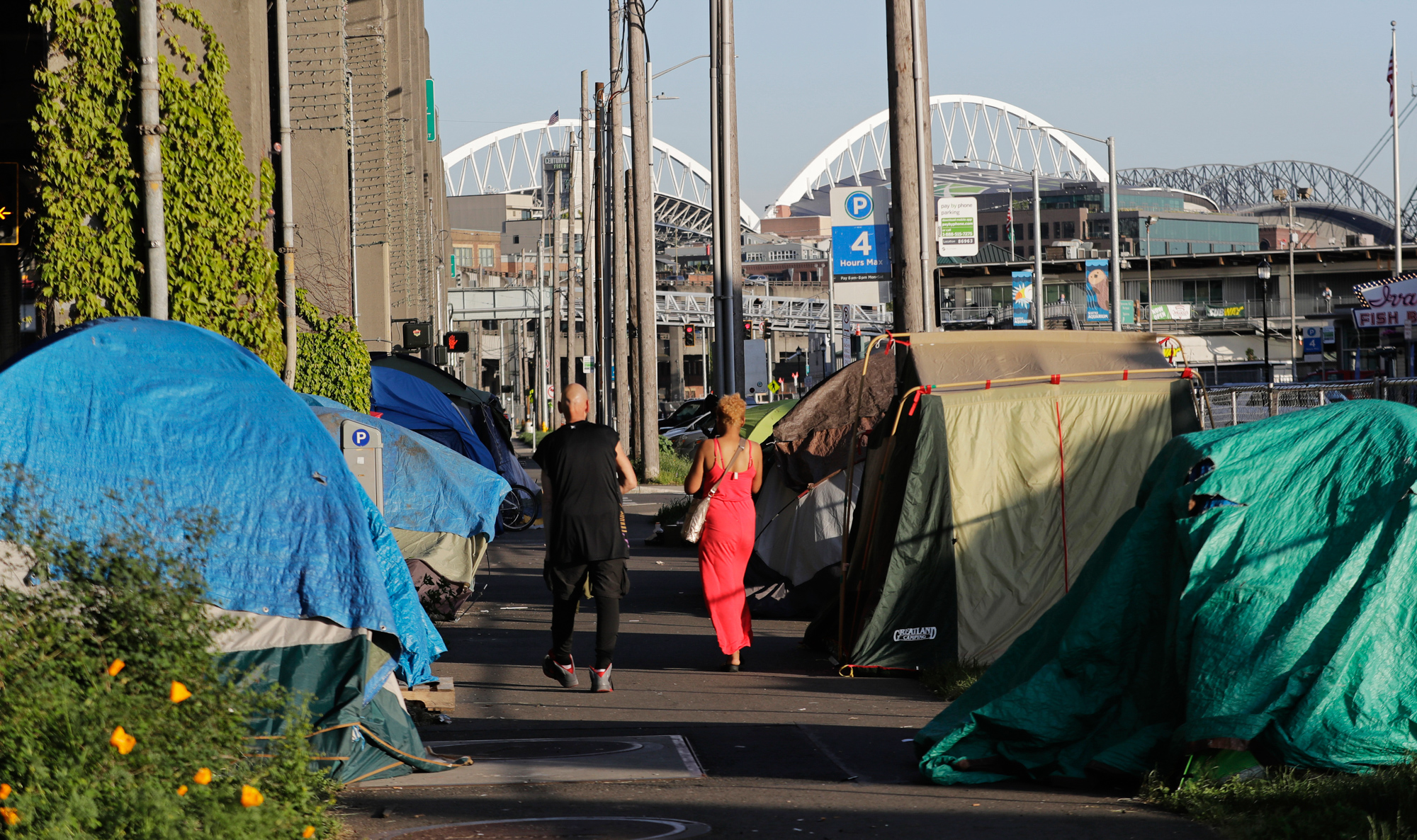 Tents used by homeless people are shown on either side of a sidewalk in Seattle with CenturyLink and (then) Safeco fields in the background, May 7, 2018. State Rep. Drew Stokesbary, R-Auburn, has introduced a measure that would allow cities and counties to increase their local sales tax rate by up to 0.25% without a vote of the people, with the hope of using funds toward homeless initiatives. (Ted S. Warren/AP)

With voters and lawmakers alike identifying homelessness as the top issue before Washington’s Legislature this year, several proposals at the state Capitol aim to let cities raise more money locally to tackle the problem.

Where the plans diverge: whether access to the new tax option should be tied to certain conditions, such as cities promising to clear unauthorized encampments and banning safe injection sites.

State Rep. Drew Stokesbary, R-Auburn, thinks those are reasonable conditions to impose. A measure he introduced Wednesday would allow cities and counties to increase their local sales tax rate by up to 0.25% without a vote of the people. His plan would have the state pay for half of the tax increase, so that local residents would feel only half the impact when they shop.

The money could be used to pay for a variety of services to address homelessness, including building shelter beds, paying for outreach workers and starting diversion programs. But, in exchange, cities and counties would have to pass ordinances banning safe injection sites within their borders, as well as banning encampments within 500 feet of parks, schools and courthouses.

“The goal of this legislation is not just to provide help to the people who need it because they're experiencing homelessness, but also, for our constituents, to restore that feeling of safety in their communities that they need,” Stokesbary said last week.

So far, only Seattle has expressed much interest in opening a supervised injection site where people would be able to use illegal drugs. Even so, Republican lawmakers continue to try to find ways to limit such facilities across the state.

Competing tax plans from Democratic lawmakers would similarly let cities and counties increase the local sales tax to pay for affordable housing, but without the same strings attached.

One such measure, Senate Bill 6126, sponsored by state Sen. Sam Hunt, D-Olympia, had a public hearing Tuesday at the state Capitol. It, too, would allow cities and counties to raise their local sales taxes by a vote of the city or county council without requiring the approval of local voters.

Hunt’s proposal is similar to a measure from state Rep. Beth Doglio, D-Olympia, which is also before the Legislature this year.

Doglio said she thinks it is best to give cities and counties the maximum flexibility when it comes to raising money for affordable housing. She said both her legislation and Hunt's would do that, enabling cities to act quickly to address urgent problems in their communities.

“It’s a crisis right now,” Doglio said. “There are thousands of people who need shelter and housing.”

The bills from Hunt and Doglio would allow a smaller sales tax increase than Stokesbary’s bill — only 0.1%. Under their proposals, cities and counties would be slightly more limited in how they could use the money, being able to spend it mainly on affordable housing options and behavioral-health treatment programs, and not necessarily all types of services to combat homelessness.

Another difference: The Democratic lawmakers’ proposals wouldn’t provide additional money from the state to bolster the money raised through the local sales-tax hike.

And while Stokesbary’s bill would require the tax increase to go to voters for reauthorization after four years, Doglio and Hunt’s bills wouldn’t require voters to weigh in at any point.

That’s a concern for some cities, such as Bellevue and Redmond, which are in a county where sales taxes are already high, said Briahna Murray, a lobbyist for the two cities.

While the cities support the spirit of the measure, Murray said, they worry about further increasing the sales tax, which Murray described as “regressive” and “very high in King County.”

“Removing the voter approval requirement removes a layer of additional scrutiny,” Murray testified during the hearing on Hunt’s bill on Tuesday.

Republican lawmakers in the House and Senate are likely to have similar concerns. Even Stokesbary said he expects some pushback from his fellow Republicans about how his bill would give cities a way to raise taxes without a public vote.

State Sen. Jim Honeyford, R-Sunnyside, alluded to those criticisms on Tuesday. “It looks like just a means to raise taxes much easier, isn’t that the fact?” Honeyford asked during the hearing on Hunt’s proposal.

Stokesbary said he is trying to include accountability measures, such as the requirement to clean up encampments, to help allay some of those concerns.

City officials and affordable housing advocates, however, are unlikely to embrace the conditions that Stokesbary’s bill would impose.

“What I expect … is that we will get folks who have very serious concerns about whether those particular provisions are workable,” said Carl Schroeder, a lobbyist for the Association of Washington Cities, talking about the requirements to ban safe-injection sites and encampments.

Democrats, who control both the state House and state Senate, have also signaled that they don’t think banning safe-injection sites or requiring encampment cleanups should be part of the same discussion as raising money to address homelessness and affordable-housing issues more broadly.

“I worry a little bit about moralistic approaches that might make good headlines, but are not actually going to address the challenges,” said Macri, who questioned the wisdom of putting up more barriers to people receiving housing and support services.

Stokesbary’s bill also is likely to face another hurdle: coming up with the money. Because his bill would have state funding attached, it would require the state to budget additional money for the plan to become reality.

Such an approach will likely be more difficult to pass than measures that only raise taxes locally and don’t require any new state money, said Michele Thomas, director of policy and advocacy at the Washington Low Income Housing Alliance.

Because Stokesbary’s bill could cost anywhere between tens of millions and hundreds of millions of dollars to implement, Thomas thinks it is less likely to pique legislators’ interest in 2020, which she called "a tight budget year."

The Legislature is in the middle of a short, 60-day session in which lawmakers are expected to make adjustments to the state’s current two-year budget, but are less likely to enact major new spending initiatives.

Democratic leaders have said they also probably won’t have the votes to enact a plan sought by Gov. Jay Inslee to use the state’s emergency funds to address homelessness. The Democratic governor has proposed dipping into the state’s rainy day fund to try to halve the number of people living outside in the next two years.

But using that emergency funding would require a 60% vote of the Legislature — and Democrats’ majorities aren’t that strong. Minority Republicans, meanwhile, have questioned the wisdom of draining $319 million from the state’s reserves, when some fear an economic recession could be around the corner. 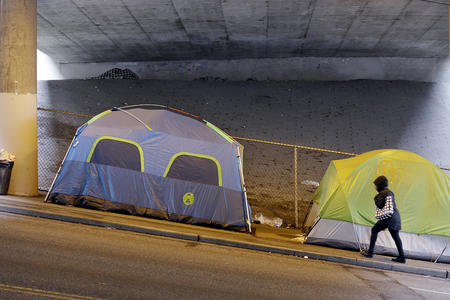 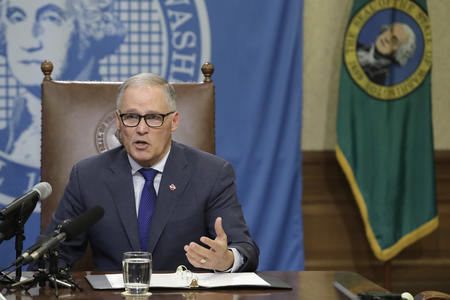 The governor's 2020 supplemental budget proposes pulling $319 million from a state emergency fund to pay for housing and homelessness services in Washington state.

The governor's 2020 supplemental budget proposes pulling $319 million from a state emergency fund to pay for housing and homelessness services in Washington state.