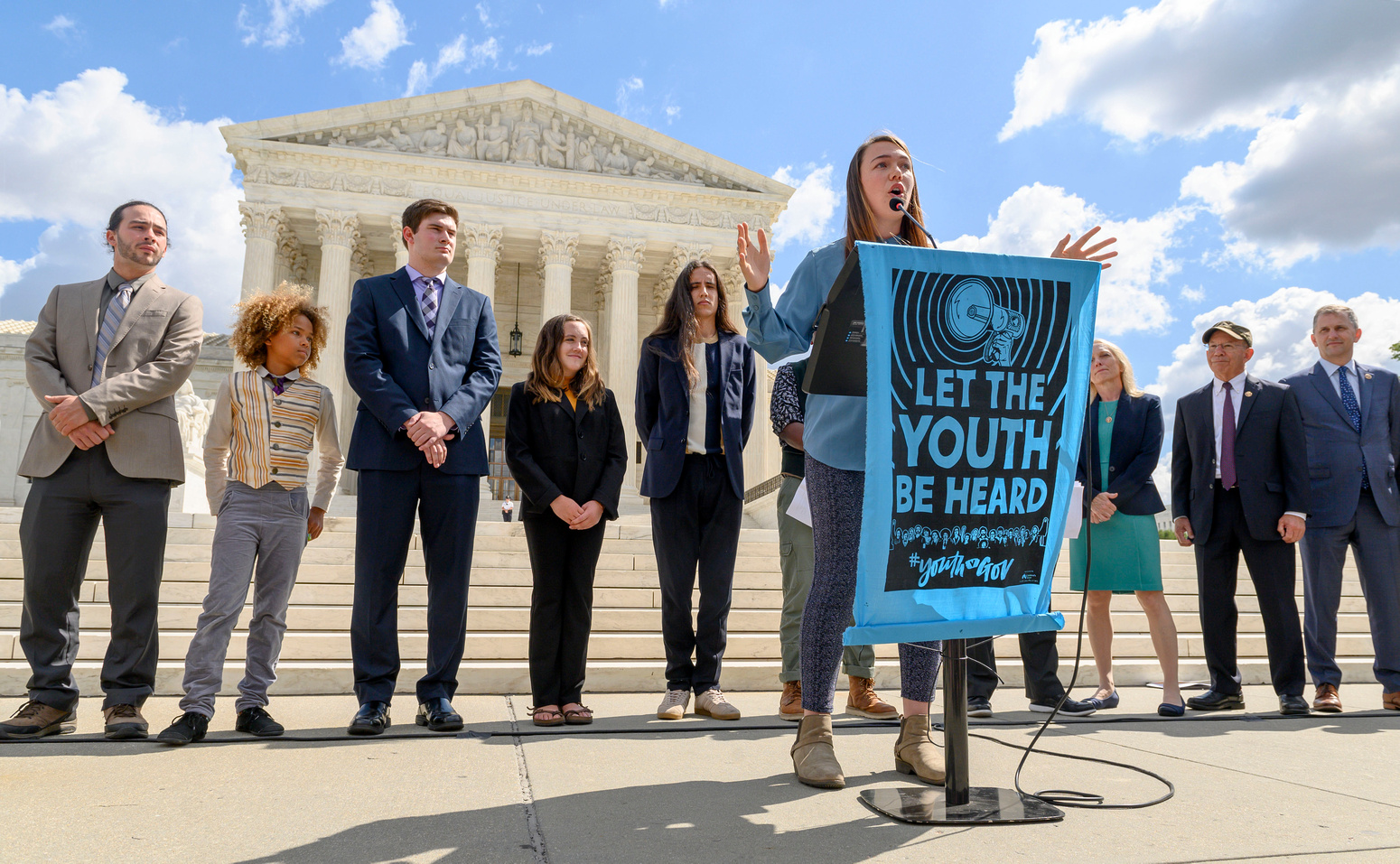 Avery M., 14, was headed to her third-period class when a friend, Hazel V., texted to ask how she felt about a decision in a landmark climate change lawsuit against the U.S. government in the 9th U.S. Circuit Court of Appeals.

“I was confused,” says Avery, an Oregon freshman in high school. “[Hazel] said that the case had been dismissed, and it was then that the bell rang and I was asked to turn off my phone. I waited the whole class gripping my pencil and rubbing my temples wondering what she meant.”

Many climate-concerned young Americans are monitoring the country’s halls of power, but for Avery and Hazel, this court decision was even more personal: They had joined 19 other peers, ages 12 to 23, as plaintiffs in the case.

Working with three attorneys from Our Children’s Trust, the 21 young activists filed the lawsuit⁠ Juliana vs. United States of America in September 2015 in U.S. District Court for Oregon. The suit sought to hold the U.S. accountable for its role in the climate crisis, charging it to work rapidly to reverse and mitigate the crisis by creating policies that phase out carbon dioxide emissions, among other things.

Years of litigation tested and bonded the group, whose members say this setback isn’t the end for them. But the 9th Circuit dismissal still hit hard.

“When I got the whole story, I was angry,” says Avery, who joined the lawsuit at age 10. “I didn’t feel sad until I saw all of the headlines in the media about us being squashed by the government, and at that point I just felt betrayed.”

Juliana plaintiffs argue the federal government is responsible for maintaining resources such as the environment for the public, and that by allowing and encouraging the amount of carbon emissions to grow, it violates Americans’ “fundamental constitutional rights to life, liberty and property” in a way that disproportionately impacts young people.

The United Nations International Panel on Climate Change says that without appropriate action to reduce global warming, humanity is less than 11 years removed from a global catastrophe.

“A livable future includes the opportunity to drink clean water, to grow food, to be free from direct and imminent property damage caused by extreme weather events, to benefit from the use of property, and to enjoy the abundant and rich biodiversity of our nation,” their lawsuit says.

The case had been scheduled for trial when the district court agreed last year, at the defense’s request, to allow the appeals court to review whether courts have the power to hear and decide the plaintiffs’ claim. The 9th Circuit three-judge panel heard the case in June 2019. On Jan. 17 this year, the panel ruled 2-1 that the case should be returned to the district court and dismissed.

The judges recognized the severity of the crisis and conceded that global warming and pollution threaten the plaintiffs’ food and water supply, outdoor access and health. But the majority ultimately found the case didn’t have standing, ruling the judiciary cannot “order, design, supervise, or implement” the requested action on climate change upon the federal government.

“It was implied that the way the climate crisis should be addressed is through the executive and legislative branches of government,” says Avery. “But I'm 14 and I can't vote. That's the whole point of this lawsuit.”

Plaintiff Alex Loznak, a recent college graduate, disagrees with the decision. “The judicial history of this country demonstrates that courts do have the authority to intervene even in fraught policy areas such as civil rights, women's rights and same-sex marriage,” he says. “The mere fact that an issue has political dimensions does not mean it is exclusively to be dealt with by the elected branches of government.”

“I think for the kids what's most important is the court confirmed that they're being injured today … [and] that the government has caused and contributed to those injuries,” says Seattle lawyer Andrea Rodgers. She is one of three attorneys on the case, and has been representing youth plaintiffs in climate cases since 2011. “They have met with more political leaders than any other person I know.”

“This decision exacerbates the already serious leadership vacuum on climate change in our country,” Loznak says. “Youth must now take it upon themselves to rise to the moment and mobilize and organize like never before.”

‘A tough burden to carry’

Committing a large chunk of childhood to a lengthy court battle brought considerable stress to several of the plaintiffs involved.

“When I joined the lawsuit, I thought that we would be done in a year or so, but little did I know what an intense legal battle we would be facing,” Avery says. Over the past few years, the plaintiffs have been to a number of court hearings and oral arguments. Rodgers says the defense deposed at least 16 plaintiffs with their attorneys present. In addition, the plaintiffs have spent substantial time outside of court advocating for and educating the public about their claims. They've also written declarations to the court to share their concerns in their own voices.

“[I have] a pretty packed schedule, so when something for the case comes up there have to be significant changes in my day,” plaintiff Sahara V., 15, says. “If there is a hearing, rally or speaking event that requires travel, I will oftentimes miss everything, or most of what I do, in a normal day to go. I do not mind, though, because my activism is a priority for me, and I am willing to put in more time and work [at school] to make up for it.”

Nearly a year before the decision, plaintiff Aji Piper submitted an impassioned declaration to the courts to explain how the languishing case negatively impacted his life.

“The unending stays of our case feel like constantly being slapped back in your seat,” he says in the statement. "It is not only intensely frustrating, but worsens the pressure cooker feeling I have … to successfully address this climate crisis. As a young person, that is a tough burden to carry."

Piper joined the suit after experiencing climate impacts in Puget Sound and Washington state, like summers of intense wildfire smoke, which he outlined in his statement. (Piper was unavailable for interview at press time.)

He ultimately dropped out of high school to focus on the lawsuit. With the stress of living with climate change, his feelings about the government’s conduct, his experience with the judicial system and trying to juggle many responsibilities, Piper says his health declined.

“The anxiety causes stress-induced insomnia where I have periods of my life when I cannot sleep for days on end,” he writes. “I have these intense moments where I feel the weight of all of it bearing down on me.”

“The only way I can alleviate these feelings is to make forward progress,” Piper writes.

But they’re not giving up

The history of stays and setbacks has steadily thickened the plaintiffs’ skin — and now, they’ve helped develop a generation of climate champions.

“When we first started, there wasn’t that much of a youth movement on climate and yet now there is Greta Thunberg, youth climate marches, People’s Climate March, Sunrise and so many more standing with us,” plaintiff Jacob Lebel says. “It has been amazing to see the response to our case and to see firsthand this movement for climate and environmental action as it grows.”

For Sahara, the company and camaraderie with her fellow activists make setbacks more manageable.

“When I saw Avery and Hazel at school the day we found out about the newest ruling,” Sahara says, “I gave them both hugs and we talked about how we felt. That night Kelsey [Juliana] invited all of the in-town plaintiffs to her house for a movie and ice cream sundaes. When I have these friends around me who understand how I feel, I am comfortable with being sad and frustrated.”

That resilience will be useful for the next phase of the case.

“Where the court I think fell down in its reasoning is that there's nothing a court can do about the government's misconduct — so that's an issue that we will be pursuing on appeal,” Rodgers says. “We're not asking the court to change the policy or to write the policy. We're telling the court to make a declaration that the youths’ rights have been violated, and to order the defendant to figure out how to fix it. And that's up to the defendants to do.”

She and plaintiffs cite Brown v. Board of Education as proof of concept: The court decided that desegregation harmed children and violated their right to equal protection under the law. A suite of later court decisions and litigation dealt with how to solve the problem. “The court didn't weigh in on how to do that. They let the defendants come up with plans and proposals to do that. And the court decided what met constitutional muster and what did not,” Rodgers says.

The plaintiffs hope to bring their case before the entire bench of the 9th Circuit.

They have 45 days from the ruling date to file a petition for a rehearing with all of the judges; the government will have an opportunity to respond, and then the plaintiffs will wait to hear whether the court accepts their petition. If the court accepts it, “we'll be briefing the legal issues after that and then we'll have oral arguments in the case,” says Rodgers, who isn’t sure when all of this would happen. “It will be a very busy year of briefing. We don't anticipate another decision likely until the end of the year.”

Meanwhile, plaintiffs are involved in other lawsuits. Piper is one of 13 plaintiffs who sued the Washington state government in 2014 for its alleged role in causing and contributing to climate change (Piper v. Washington State). “We’re arguing in the Washington Court of Appeals sometime this year,” says Rodgers, who is also representing Piper in that case.

Depending on what happens with a full-bench appeals review, Rodgers says, the next step would be to “petition for review with the U.S. Supreme Court. And that's the end of the road.”

“Of course I plan to keep fighting,” Avery says. “To give up would be to give up a livable future and a life-sustaining Earth for future generations. I want to tell my grandchildren that I did everything in my power to protect their quality of life.”