‘Updated procedures’ from the Seattle field office of U.S. Customs and Border Protection told agents to also detain people with ties to Palestine and Lebanon, and to ask about their religion. 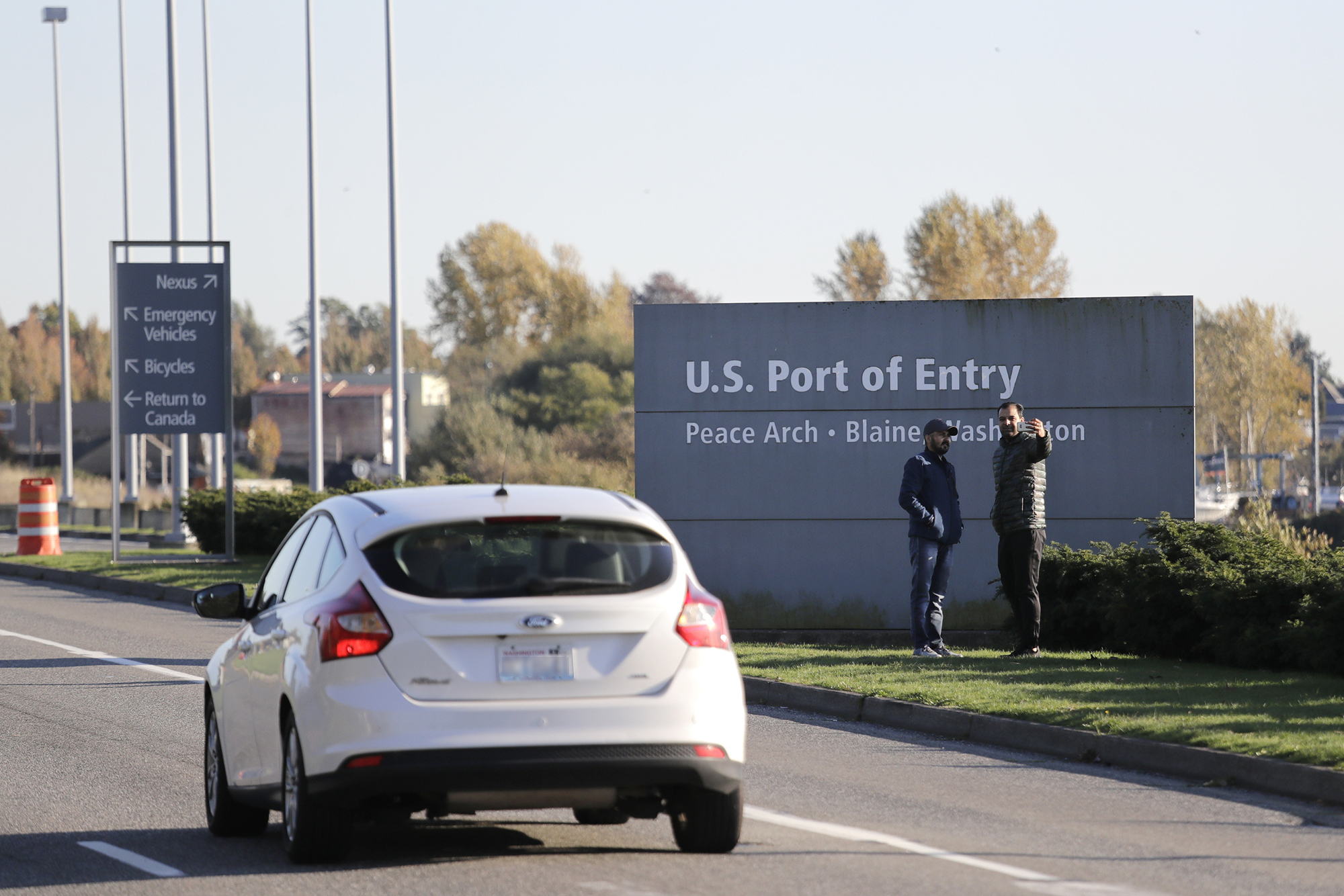 In this photo taken Oct. 9, 2019, pedestrians take a photo at an entry sign as traffic enters the United States from Canada at the Peace Arch Border Crossing in Blaine, Wash. (Elaine Thompson/AP)

Crosscut has obtained a copy of a directive that appears to be the impetus for a rash of unusual interrogation and detaining of Iranian Americans at the U.S.-Canada border earlier this month.

The directive, issued by the Seattle field office of U.S. Customs and Border Protection, was sent to immigration lawyer Leonard Saunders in Blaine by an anonymous source. Saunders says someone dropped off the memo in an unmarked envelope at his office on Wednesday.

The “updated procedures” outlined in the memo, first reported on by Blaine’s community newspaper, The Northern Light, come from Customs and Border Protection's Tactical Analytical Unit, which provides immediate response to high-risk incidents.

The memo seems to indicate the new procedures came because of the U.S. killing of  Maj. Gen. Qassem Soleimani earlier this month and the subsequent promise of retaliation by Iran’s supreme leader, Ayatollah Ali Khamenei.

Customs and Border Protection has publicly denied the existence of a directive ordering enhanced screening at the U.S.-Canada border.

The directive says all persons born after 1961 and before 2001 with links — such as place of birth, travel or citizenship — to Palestine, Lebanon and Iran should be vetted at the border. The memo specifies that individuals with connections to the military, extremist ideology, criminality and terrorism should be highly vetted and that what the agency was looking for were members of Iran’s Quds Force, part of the country’s Revolutionary Guard that has developed ties with armed groups in various countries.

The memo makes specific mention of Shia Islam, the predominant religion in Iran, and cautions that anyone can deny being of the faith.

“Even if they are not of Shia faith, anyone can state they are Baha'i, please question further to determine this is the case. When in doubt send for high side checks,” the memo states.

Saunders' revelation of the directive comes just weeks after national outcry over CBP's detention of approximately 60 to 200 Iranian Americans during the first weekend of January — many of them permanent residents or U.S. citizens. Many Persians and others from the Middle East reported being held for hours in Blaine. Crosscut spoke to one Iranian Canadian woman who works at Microsoft in Bellevue. She was detained for 11 hours on Saturday, Jan. 4.

Last week, Saunders, who witnessed the detentions at the border crossing in Blaine and represents two clients who were detained, also released an email he received from an unidentified Customs and Border Protection officer. In the email, obtained by Crosscut and first reported on by The Northern Light, the officer complains about what he saw as the unfair interrogation and detainment of Persians.

“It has gotten way out of hand. This is not why I joined Customs way back when,” the email goes on to say. “I wanted to stop terrorists and drugs from getting into the United States.”

“It is my hope that folks like you are going to fight for the travelers that really don't deserve the ridiculous interrogations that they are getting,” the unnamed officer concludes. “The knuckle heads that came up with this operation need to be reigned [sic] in.”

The email notes that after the detentions became national news, Blaine port director Kenneth Williams suspended the directive on Jan. 5 at 1 p.m.

In social-media posts and statements to the media, Customs and Border Protection has maintained it never issued a directive that would have led to detaining Iranian Americans or others from the Middle East. The undated directive given to Crosscut seems to indicate those statements were wrong.

A later email sent to members of Congress, including U.S. Rep. Pramila Jayapal, D-Seattle, however, explained that “field leadership has discretion on how to enhance operational posture based upon the totality of circumstances.”

The email, sent by Allie Cleaves of the Office of Congressional Affairs for the CBP, noted officials in Blaine were immediately contacted once the agency learned of the detentions.

When asked about the directive, CBP spokesperson Jason Givens said in an email that the agency does not comment on leaked documents.

Givens added that the agency "has understood Iran and its proxies to be a very capable adversary for some time. Consistent with our statutory authorities, CBP leverages all available tools and information to ensure that individuals who seek entry into the United States are appropriately screened."

The agency "is committed to protecting the civil rights and civil liberties of every individual whom we encounter. Our officers are trained to enforce U.S. laws uniformly and fairly and they do not discriminate based on religion, race, ethnicity or sexual orientation,” Givens said.

Jayapal, however, who has been asking the Department of Homeland Security for answers about the interrogations, said in a statement: “This document, if verified as coming from the Seattle CBP Field Office, matches exactly the process described by CBP leadership in a briefing last week."

In a statement, Jamal Abdi, president of the National Iranian American Council, called on "the officers who issued this discriminatory order to be fired and for CBP to issue a formal apology for its discrimination and public deception."

“It is hard to overstate the psychological damage that this administration’s institutional discrimination has wrought against the Iranian-American community," he said.

Saunders says he believes much of the blame for the operation is due to new Seattle Field Operations Director Adele Fasano, who was appointed last year and whose office recently moved to Blaine.

The unidentified officer who wrote to Saunders also cited John Dahm, who serves in Blaine as the assistant port director, as “the prime mover behind the ER crusade that the Blaine area has been on,” referring to expedited removals.

According to Customs and Border Protection data obtained by CTV News, expedited removals, or rapid deportations that include a five-year ban from entering the U.S., have recently tripled — from 91 in 2018 to 309 in 2019 — at borders that report to CBP’s Seattle Field Office.

In the email, the officer noted Fasano had “been wooed by him [Dahm] of late.”

The Department of Homeland Security’s Office for Civil Rights and Civil Liberties is also said to be investigating the detainments at the border.