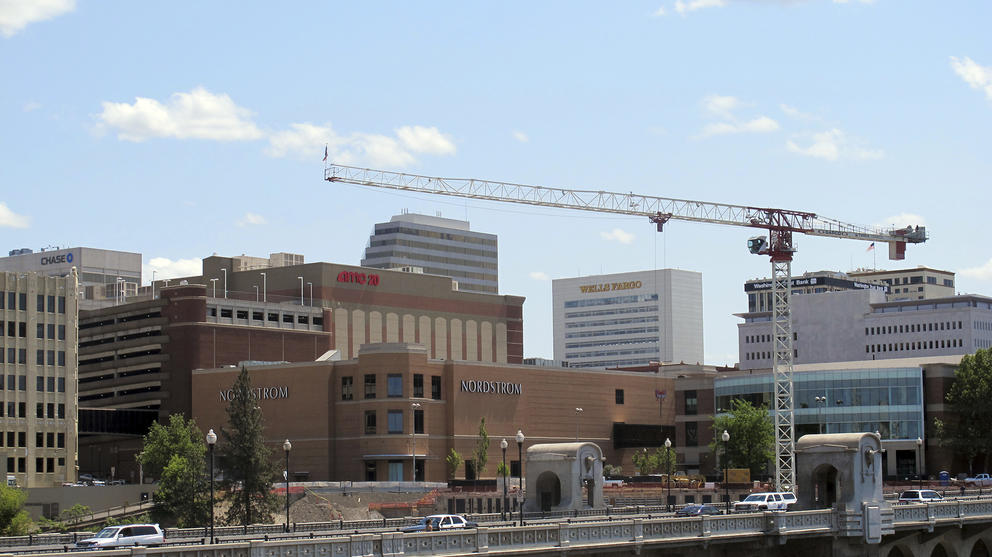 A construction crane looms over downtown and the Monroe Street Bridge in Spokane on June 4, 2018. (Nicholas K. Geranios/AP)

Spokane City Councilmember Kate Burke knows what it’s like to get an eviction notice. When she was running for office in 2017, a real estate agent knocked on the door of the house she was renting and told her that it would soon be on the market; a week later, she got a letter telling her she had 20 days to move out. She hadn’t violated her lease terms or damaged the property, but in a city without tenant protections, that didn’t matter — she had to find a new place.

Burke was luckier than many renters. Her property management company helped her find a new place, and she was able to afford the rent increase, from $900 to $1,200 a month. Still, the experience helped shape her role on the city council, where she has fought for tenant protections.

In Spokane, income inequality and out-of-reach housing costs are forcing people onto the streets and into shelters. In late November, lawmakers drafted a set of laws that, should they pass, would usher in new safeguards for renters. The fight over these proposed rules exemplifies the struggles many Western cities face as they attempt to balance continued growth with stability and shelter for their residents.

Housing costs are soaring in Spokane, and wages aren’t keeping up. Since 2010, the average rent has grown by 74%, to over $1,000 per month. In the same period, the average renter’s income has increased by only 51%. For Keri, a single mother, that’s a major problem: Landlords want tenants with incomes at least three times the rent, well above what Keri makes working full-time. (Keri asked that her last name be withheld to avoid conflict with her current landlord.) With her rental duplex slated for renovation and her lease ending in December, she looked at basement apartments, searched for roommates and even considered leaving Spokane altogether. “I’ve never had this problem before, ever,” she said. “That just sucks.”

Rent is going up in part because of an influx of new residents. In November 2019, real estate in Spokane and Spokane Valley had the highest relative show of interest in the nation by out-of-towners, according to Realtor.com. Much of that demand comes from the high-priced Seattle area. Census data show that between 2013 and 2017, about 13,500 more people moved to Spokane County than left, with the highest amounts coming from populous counties in Western Washington.

Faced with a challenging housing market and the prospect of being priced out, tenants in Washington’s second-largest city are pushing for protections. Over the course of last year, city leaders convened a series of meetings with landlords and tenants to address the issue. In late November 2019, the council drafted tenant protection ordinances that narrow the reasons for eviction, set limits on deposit and pet fees and guarantee the rights of tenants to organize, among other provisions. The new laws would also require landlords to pay renters $2,000 in relocation costs under certain circumstances, including rent hikes that create a financial burden.

The proposed ordinances — especially the relocation provision — could make a bad rental market even worse, said Steve Corker, the head of the Landlord Association of the Inland Northwest. Many small landlords might choose to sell their units rather than pay tenants to move. Big developers could also shy away from investing in Spokane, if laws limit how they carry out their business and can’t control conduct on their properties, Corker said. “We don’t want to discourage people out of the rental business,” he said. When the new tenant protections were announced, Corker posted on the landlord association’s website “asking every landlord, every Realtor, every property manager to write, call, email city council members requesting a delay in this vote. …”

Spokane isn't alone in seeking solutions to keep housing affordable for renters. Earlier this year, Oregon’s Legislature enacted statewide rent control that caps year-to-year increases at 7% plus inflation. In Seattle, City Councilmember Kshama Sawant hopes to repeal a Washington state law banning local rent-control measures; she also wants to ban evictions during winter. And, starting in 2020, California will have statewide rules that require landlords to cite legitimate reasons for evictions, pay relocation fees to tenants evicted without cause and restrict annual rent increases to 5% plus inflation.

Statewide rent control is a new phenomenon in the West, but some large cities have served as a testing ground for it, with mixed results. In the short term, limiting rent increases protects tenants from being priced out, according to a 2019 study by Stanford University economists assessing the impact of a 1994 rent control law in San Francisco. Rent control proved especially beneficial for people of color, who, in Spokane as well as in San Francisco, are more likely than their white counterparts to rent. But in the long term, landlords subject to rent control were more likely to sell their rentals or redevelop them to skirt the tenant protections. The researchers concluded that, over time, rent control in San Francisco shrank the rental supply, increased rental costs and exacerbated gentrification and inequality.

Spokane tenant advocate Terri Anderson, the co-executive director of the Washington Tenants Union, acknowledged that the proposed measures might not be a long-term solution. They would, however, help people currently facing evictions and the specter of homelessness. “It’s triage,” Anderson said. “We’re just stopping the bleeding as we fight for permanent affordable housing.”

Vicki Dehnart, a 72-year-old retiree on a fixed income, would have benefited from such protections had they been in place last summer, when she was evicted from the apartment she had lived in for 33 years. Unable to find a rental in the tight market and without relocation assistance to help with moving costs, Dehnart first endured a disturbing experience with a roommate and then, last summer, became homeless for two months. During July and August, she spent her days at a park, sitting on a blanket with her two 20-year-old cats, Feather and Socks, and her nights at the Hope House shelter in downtown Spokane. Every month, she’d bump up against the $500 limit on each of her two credit cards.

“It was very traumatic for me,” she said. Eventually, Dehnart was able to find stable senior housing. But she still worries about the women she met in the shelter who haven’t been able to find housing, and the many others who face evictions and rent increases. “There’s nothing we did wrong,” Dehnart said. But rising rents and lack of protections “forced us into a vulnerable situation.”

A week before the Spokane City Council was set to vote on the ordinances in early December, the blitz of phone calls and emails from landlords led to the vote being postponed until March. The night after the delay was announced, incoming City Council President Breean Beggs met with about 20 tenants and advocates and told them the vote had been delayed because the measures, at the time, lacked the votes to pass.

Attendees sitting in clusters at small tables peppered Beggs with questions as he listened patiently. He advised the tenants on the rules for public testimony and suggested that loud displays of frustration would be less effective than heartfelt personal stories. He also encouraged them to leverage any personal connections with council members.

Councilmember Kate Burke felt less conciliatory. “We’re deferring action in winter, and I guarantee I’ll be getting more emails and phone calls from tenants telling me they’re being taken advantage of,” Burke said. In the meantime, she has received more than 150 emails from landlords, many of whom she says were misinformed about the ordinances and their possible impacts. To Burke, delaying the vote seemed like another win for the political establishment. “The power in this city is and always has been with the good old boys,” she said. “The more we sit here and keep taking advice from landlords, the more we’re just going to wait.”

This story was originally published at High Country News on Dec. 18, 2019.