‘Art from Ashes’ commemorates 75 years since the liberation of Auschwitz. 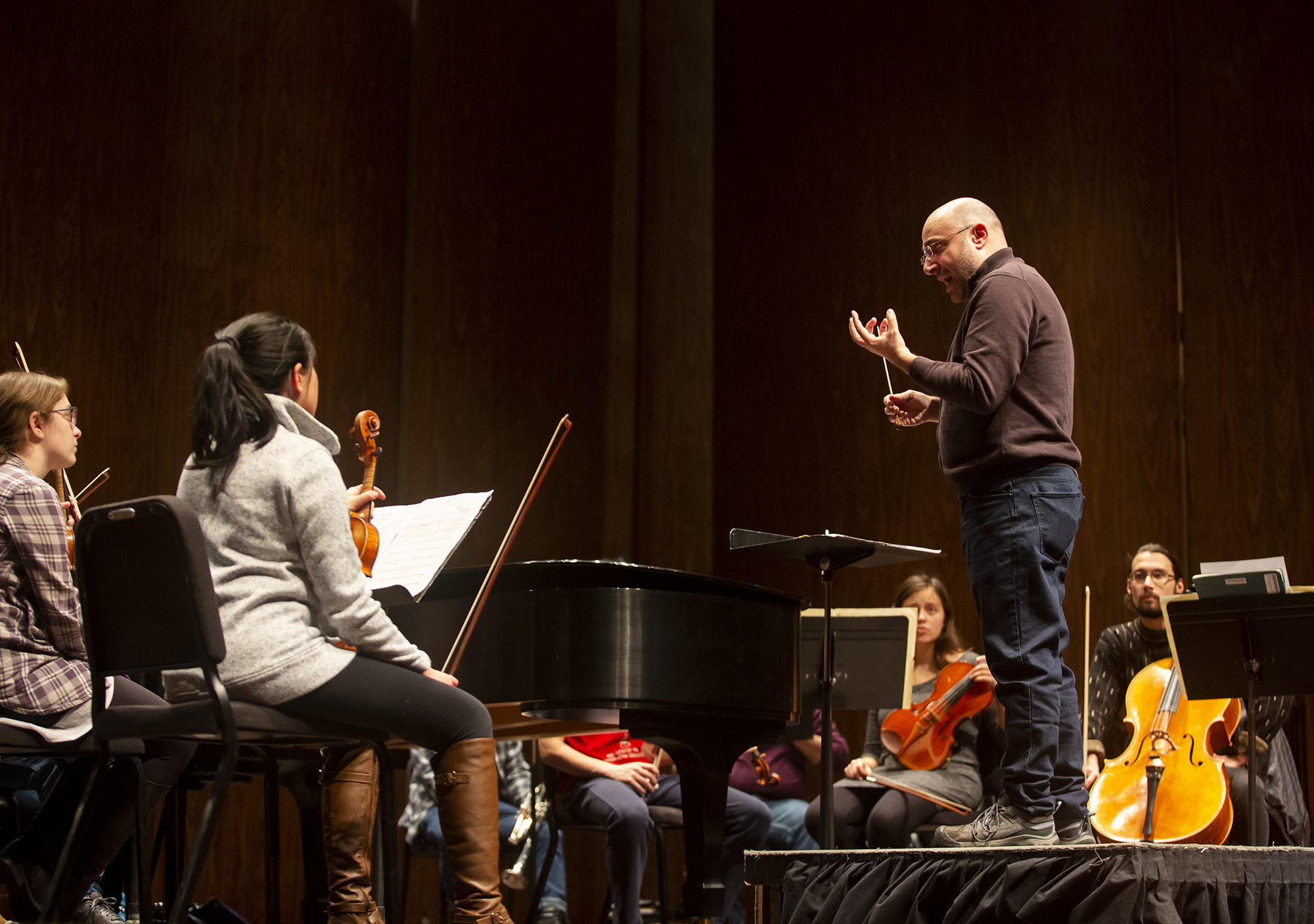 University of Washington Symphony Orchestra conductor David Alexander Rahbee leads the UW Chamber Orchestra during a rehearsal at Meany Hall at the University of Washington campus on Wednesday, Jan. 15, 2020. The group will perform in the upcoming Music of Remembrance concert, “Art from Ashes,” featuring music from composers killed by the Nazis during World War II. (Lindsey Wasson for Crosscut)

By the time German troops invaded Czechoslovakia on March 15, 1939, Czech composer Erwin Schulhoff, a Jew and a communist living in his native Prague, had already been denounced by the Nazi regime in Germany.

Among the first European composers to experiment with jazz elements in classical music, Schulhoff drew praise for his original symphonies and concertos. A radical leftist, he had been wounded twice during World War I, suffered trauma and became a prisoner-of-war.

Yet, during those horrors, Schulhoff kept composing. He continued to write music after Nazis arrested him in 1941 and deported him to the Wülzburg concentration camp in Bavaria. He didn’t stop composing until his death there a year later.

Schulhoff is among many composers murdered during the Holocaust and now championed by arts organization Music of Remembrance (MOR). The 22-year-old Seattle group’s new concert, Art From Ashes, commemorates the 75th anniversary of the liberation of Auschwitz, the extermination camp where 1.6 million people were killed.

“There are people who already had established careers as composers and artists, so they just continued to do what they did best,” says Lexi Jason, of the Museum of Jewish Heritage in New York. “There were also people clandestinely making art either for themselves, or to bear witness to what they were seeing.”

MOR founder Mina Miller says creating music and art in the camps was a way to preserve one’s identity. “What Nazis wanted to do was make everyone anonymous,” she says. “Shave your head, give you a number, put you in a prison uniform, and you’re anonymous. But no one can take your soul or ideas. And that’s what this concert is about. We celebrate the creative spirit, the human spirit.”

Dedicated to performing music from and about the Holocaust, MOR gathers ensembles (sourced from local orchestras) to present concerts that mix old and recent compositions. Among the latter, the repertoire includes 30 works commissioned by the nonprofit and composed by the likes of Lori Laitman, an acclaimed creator of vocal music; Betty Olivero, a renowned Israeli composer; and Shinji Eshima, whose ballet “RAkU” was performed by Pacific Northwest Ballet in 2018.

The study of music created during the Holocaust has become vast and diverse in recent years, with some outstanding online resources (Music and the Holocaust; United States Holocaust Memorial Museum) that allow one to hear the era’s classical works, folk songs, Yiddish tunes, music from besieged Jewish ghettoes (e.g., Warsaw and Vilna), music of the resistance and so-called “degenerate” music — a label applied by Nazi officials to anything they didn’t like.

In addition to Schulhoff’s String Quartet No. 2, Third Movement, selections on the Art From Ashes bill include the fantastic Overture for Small Orchestra, written in the Terezín camp (located in the Czech Republic) by Hans Krása, one of several important composers held there until he was sent to his death in Auschwitz.

There are also a pair of Yiddish songs from the besieged Vilna Ghetto (in Lithuania), and a piece by Dick Kattenburg, a prolific Dutch composer who hid from the Nazis with his family, but was captured and killed, at age 24, in Auschwitz.

Music of Remembrance presents Art From Ashes: A Concert Commemorating the 75th Anniversary of the Liberation of Auschwitz at Benaroya Hall on Monday, Jan. 27 at 5:30 p.m. (Free.) Tickets are sold out, but some will be available on standby. Visit the website to be added to the waitlist, or arrive early to the concert.

Opening the eyes of young people to the reality of the Holocaust is one of MOR’s objectives.

“The Holocaust is less significant to a lot of people now,” says Jason of the Museum of Jewish Heritage. Part of her work is bringing together aging Holocaust survivors to meet with school groups and others.

“Seventy-percent of millennials don’t know what Auschwitz was,” she says. “Many students don’t know much about the Holocaust.”

Such ignorance can only feed the rising incidence of anti-Semitism and Nazi sympathizers in the U.S. and abroad. But among the millions who died in or survived the camps were all types of creative people, not just composers. They used their muses to hold on to themselves, defy repression and capture their daily experiences with feverish urgency.

Viola player Assadi speaks to the importance of preserving such a creative legacy — as well as the one lost. “Playing the music of composers who perished in the Holocaust makes me reflect on how many lives were cut short, and how much more music we could have known,” she says.