The only party in town: What fewer split districts mean for Washington's political agenda

As the state Legislature convenes, fewer voters are represented by both Republicans and Democrats at the Capitol than at any time since the 1930s. 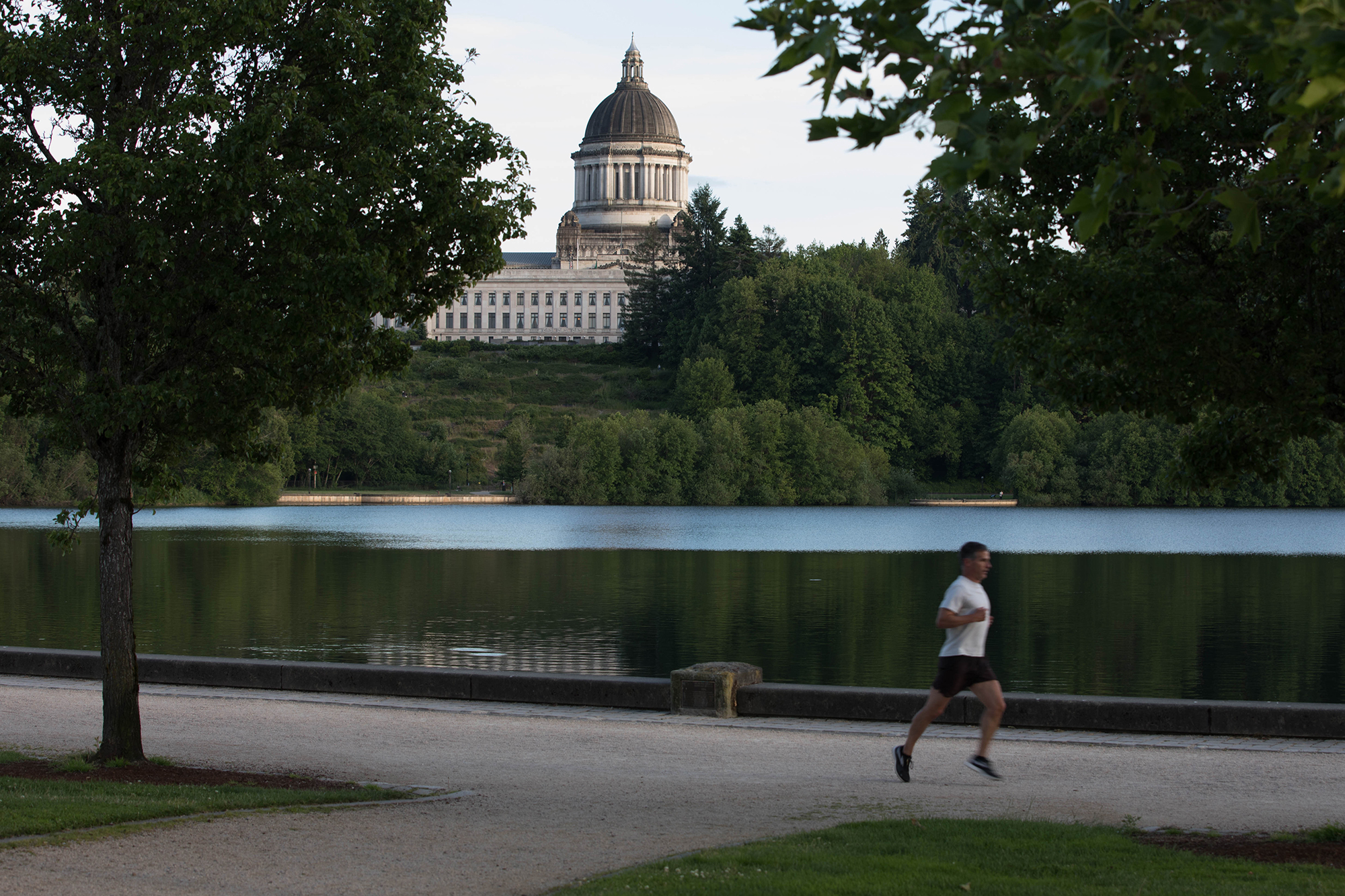 Paul Graves saw the issue from both sides. Two years ago, the former Republican legislator firmly believed Washington state should ban bump stocks, the trigger-modification devices a mass shooter used to kill 58 people at an October 2017 concert in Las Vegas.

But Graves, a first-term lawmaker from a suburban district in King County, also understood his GOP colleagues’ concerns about the erosion of gun rights. So he came up with an idea: Ban bump stocks, but start a buyback program that would pay gun owners $150 when they surrender one of the devices.

Graves’ idea for the buyback program helped the bump-stock ban pick up several more Republican votes on its way to becoming law. Washington became one of the first states to outlaw the devices, which allow semi-automatic weapons to mimic the rapid-fire of machine guns. That was a year before a nationwide ban went into effect.

As Washington legislators begin a new session this week, however, Graves is no longer among them. The 2018 general election swept him and many other moderate Republicans out of suburban swing districts, especially in King County. That November, Democrats picked up seven seats in the state House and three in the state Senate.

The result: Washington’s Legislature now has fewer districts represented by both Republicans and Democrats than at any time since 1937, according to an analysis prepared by legislative staff.

As recently as 2013, 12 of the state’s 49 legislative districts were represented by both Republicans and Democrats, the staff analysis shows.

Today, only six districts send a mixture of both Republican and Democratic lawmakers to Olympia.

(The number of split districts is only five if you consider Tim Sheldon, a conservative Democrat from Potlatch who caucuses with Republicans, to be in the GOP column rather than the Democratic one.)

So, what does that mean for state politics and the legislative session that starts Monday?

Most likely, there will be a wider ideological gulf between the parties and the policies they’ll seek to pursue, political observers say.

Even some lawmakers think that’s true.

“As the districts get more polarized, it doesn’t lend itself to bipartisanship,” said state Rep. Morgan Irwin, R-Enumclaw, one of the last remaining Republican lawmakers representing a piece of King County.

The Democratic majorities that now control the state House and Senate will face more pressure from left-leaning voters to pursue unabashedly progressive policies, said Crystal Fincher, a political consultant who works mostly with Democrats. She said that will be the case even for incumbent Democrats who are running in somewhat purple districts, where their reelection isn’t totally guaranteed.

That’s because, when only Democrats or Republicans make up a district’s legislative delegation, Fincher said, “it gives people the feeling and impression that they are not in a swing district, that they are solidly red or blue” — even if that’s not necessarily true.

“So, they expect their representatives to carry the mantle of not just the party line, but a lot of times, to be on the front end of what the party is trying to push, and what activists are trying to push,” Fincher said.

Democrats who don’t champion progressive ideas, such as enacting a tax on capital gains, getting corporate money out of politics and passing strong gun-control measures, are more likely nowadays to face a primary election challenge from the left, she said.

Similarly, in districts that have become more solidly Republican over the years, those lawmakers, too, will face pressure to lean further right, said pollster Stuart Elway.

“The research shows that, if a district is fairly homogeneous, and it is a landslide district one way or another, one way to stand out is to be more extreme than the other person — not to go to the center,” Elway said.

The decline in districts with bipartisan representation marks a shift from a generation or two ago, when Washington voters were known for their willingness to split tickets, Elway said. For instance, in the 1960s and 1970s, the same Washington voters who repeatedly sent Democrat Henry “Scoop” Jackson to the U.S. Senate also elected Republican Dan Evans three times as governor.

Some of the change is driven by the increasing polarization among the electorate, Elway said, as well as the congregation of more liberal voters in cities and more conservative voters in rural areas.

The parties, however, have also changed, said Elway, who recently released a new Crosscut/Elway Poll of 405 voters across Washington state.

“There used to be a thing such as liberal Republican, or a conservative Democrat,” Elway said. “But over the years, the parties have sorted themselves out, and the voters have, too.”

In the latest Crosscut/Elway Poll, voters in districts that currently have only Democratic representatives were much more likely to support some of the liberal policies pushed by Democratic Gov. Jay Inslee, for instance. One of those proposals, a clean-fuel standard that would require fuel producers to reduce their carbon emissions, was favored by 76% of poll respondents in districts where all three local legislators are Democrats. Support was about 20 percentage points lower in all-Republican or split districts.

A similar differential could be seen in voters’ support for Inslee’s plan to spend state emergency funds to address homelessness. Voters in split districts opposed the plan, while voters in all-Democratic districts favored it.

Legislators representing true swing districts also tend to vote more cautiously, with an eye toward election season, Schultz said. With fewer swing districts, that could also mean fewer lawmakers worrying about how their votes in Olympia will affect their chances of winning another term, she said.

Fincher said she sees that dynamic already affecting important decisions before the Legislature, such as how to deal with state Rep. Matt Shea, R-Spokane Valley, who an investigation recently accused of engaging in domestic terrorism.

Fincher believes that if there were more split districts that regularly flip between electing both Republicans and Democrats, GOP lawmakers would be more inclined to take additional action against Shea. Expelling Shea from the Legislature, as some Democrats have said they want to do, would require nine House Republican votes.

“If there were more split districts, there would be a vote for expulsion tomorrow," Fincher said.

Conversely, having strong Democratic majorities made up of lawmakers from safer districts can let Democrats go after policies that they couldn't before, said state Rep. Laurie Jinkins, a Tacoma Democrat who is expected to be sworn in as the new House speaker on Monday.

“The larger majority means that there’s more flexibility to address issues,” Jinkins said. “You can still move forward and know some people are not going to vote for it. So it’s different than a 50-vote majority.”

State Sen. Mona Das, D-Kent, is one of the newer senators elected in 2018 who replaced a centrist Republican, Joe Fain.

At the moment, Das said she would consider her district “blue-leaning" — or, perhaps, “dark aubergine.” But the next time she runs for reelection, in 2022, the boundaries of her district and the other 48 legislative districts throughout the state will have changed.

A bipartisan redistricting committee is set to redraw the district lines that year, based on the results of the 2020 census.

“Everything is going to get reshuffled after that,” Das said.

For now, though, the reduced number of split districts will affect the dynamics of the next few legislative sessions until redistricting occurs.

Graves, the former GOP lawmaker who worked on the 2018 bump-stock ban, thinks that leaves state politics worse off, at least for now.

“When people in the Legislature are more concerned with their own party and their own base than trying to appeal to swing voters, then it’s harder to come up with some of those creative and interesting solutions,” Graves said.