In an area that's already the subject of ‘emphasis patrols,’ what else is left to do? 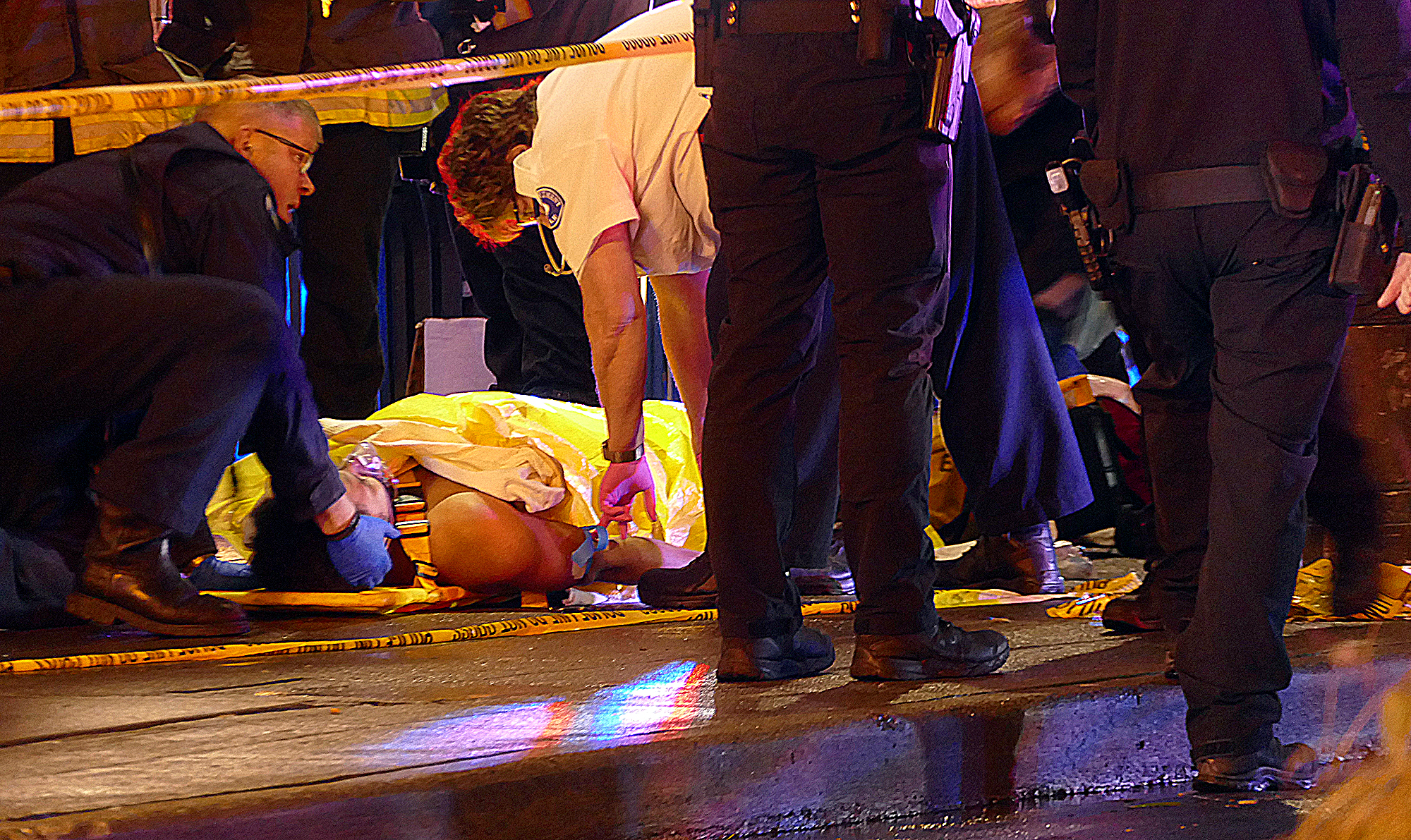 Officers attend to one of several shooting victims on Jan. 22, 2020 in Seattle after a gunman opened fire in the heavily trafficked downtown area. (David Silver/AP)

In the months preceding last week’s Third Avenue shooting, which left one woman dead and seven others injured, the Seattle Police Department had already flooded the area with an increased police presence.

In 2019, the department spent $221,000 on “emphasis patrols” along the Pike/Pine corridor, near Third Avenue and in Westlake Park — all within blocks of last week’s shooting. In total, the department dedicated 2,718 additional officer hours in 2019 — or 67 full-time weeks — over the typical police presence in the area, according to Seattle Police Department data.

The increased presence near Westlake was one of a number of emphasis areas Mayor Jenny Durkan flagged and for which the Seattle City Council approved funding last year.  And while some areas of the city have had only intermittent increases in police presence, that “emphasis” has been near constant in this area, according to a mayoral spokesperson.

On Thursday, Durkan credited this increased presence for the quick response to the shooting; the first officer was on the scene within 15 seconds, she said.

But the fact that the shooting happened under a period of significant “emphasis” gets at the complexity of addressing complaints about public safety in the area. Even before the shooting, the city was responding to calls from residents and businesses for a heightened police presence in the area, leaving open the question of what else the city can do.

Over the past five years, overall crime in the downtown corridor has largely remained steady, rising and falling only modestly from year to year. However, crimes against people — as opposed to property crime — have gone up in recent years, from 397 incidents in 2016 to 568 in 2018. SPD’s online crime data for 2019 goes only through April, but the monthly pace for crimes against people was similar to 2018.

In addition to dedicating even more police to the busy corridor, Durkan said, the city will take a “holistic” approach to the area. “Whether it’s streetlights, cutting back brush, making sure businesses can stay open, we do a range of things in addition to police,” she said.

Jon Scholes, president of the Downtown Seattle Association, agrees that the city ought to view the area holistically. But he’s become skeptical of short-term or quick fixes.

“We’re under no illusion that nicer plants or nicer bus shelters or nice material on the sidewalk would have had any impact on the three people who pulled guns on each other,” he said.

Scholes points to past patrol surges in the area, like a 2015 strategy focused on drug dealers in the area. He said they’ve always “fizzled” out. He wants the “emphasis” patrols to become a permanently heightened police presence.

At the same time, Scholes said that, while the emphasis patrols of recent months have successfully removed guns from the streets, they’ve done little to fundamentally alter Third Avenue. And for that reason, he prioritizes an overhaul of the criminal justice system, a point his organization had been making since it released a report on “prolific offenders” in the area last year.

“We have a lot of work to do with the mental health system and the county and city criminal justice system,” he said.

Mayors have sought to address complaints about Third Avenue for decades. When he was mayor, Mike McGinn had a neighborhood policing plan that called for hiring more officers and patrolling “hot spots.” Under McGinn, Capt. Jim Dermody pushed for officers to get out of their cars every hour for 15 minutes.

But McGinn said last week that the problem is likely deeper than just the police department. “You can flood the zone with officers for a few weeks and prevent another murder from happening on that block, but there are a lot of other blocks in this town,” he said. “Unless you can address underlying issues, we’re not going to change it.”

“With public safety, it’s not about ‘or’; it’s about ‘and,’ ” said Councilmember Lisa Herbold, who chairs the council’s public safety committee. “And we have to be doing everything that we can. So I’m very supportive of continuing to implement the emphasis patrols that the council supported in budget last year.”

“One of the things I’ll be checking with Chief [Carmen] Best on is whether or not her additional resources being added to address this particular hotspot is really being data driven from where she’s taking other officers and make sure we’re not leaving other areas throughout the city, [which] also have hotspots in them, underserved,” she said.

Since she was sworn in earlier this year, Councilmember Tammy Morales has raised gun violence as an issue in South Seattle, an issue that has not received the same level of attention. But her answers to addressing the problem, regardless of location, is similar.

“This conversation also needs to include the upstream issues,” she said. “If we have schools that are providing high quality education to everybody, if we have opportunities for our young people to have after school programming and mentoring and job opportunities after they graduate from high school, if we actually invest in our neighborhoods instead of investing after the fact in building more jails, we can start to solve this problem. I think we need to take a broader view of what’s going to solve some of these issues.”

Police Chief Best said Thursday that the department has flexibility around when it adds or takes away emphasis. Durkan added, “There’s no start and finish dates” to the emphasis patrols in the area. “We try not to announce when we’re done because sometimes the criminals read the paper,” she said.