In the midst of a housing crisis, some view the State Environmental Policy Act as a barrier to relief. 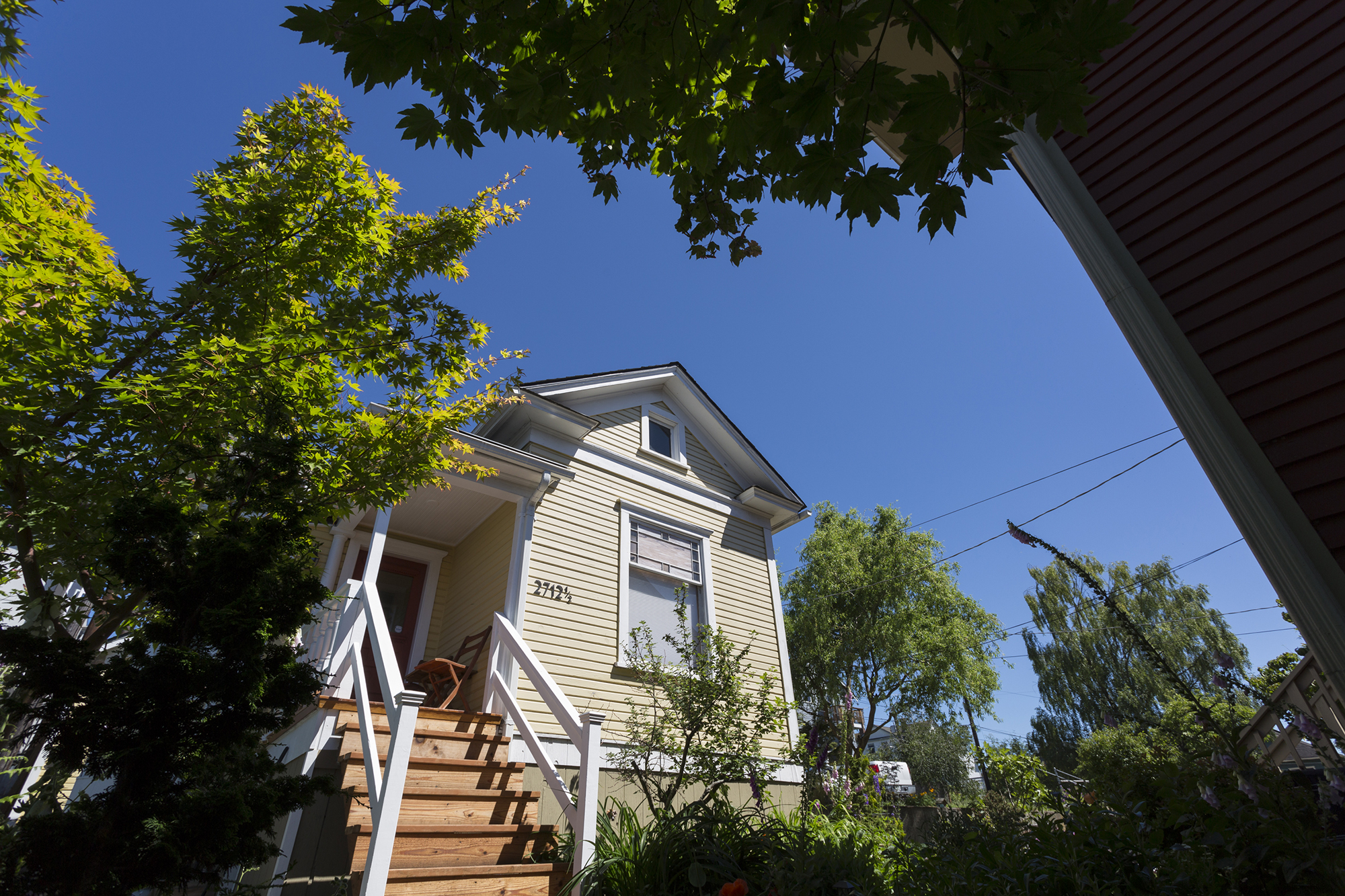 A backyard cottage at a home on Beacon Hill on June 11, 2019. In July, after four years of delay, the council again voted unanimously to ease regulations on backyard cottages and basement apartments in an effort to incentivize their construction. (Paul Christian Gordon for Crosscut)

In March, more than two years after legislation was first introduced, the Seattle City Council unanimously passed the centerpiece of its housing solution: citywide Mandatory Housing Affordability (MHA) upzones that require for-profit developers to build subsidized housing or pay into Seattle’s affordable housing fund. In June, the council voted unanimously to build at least 235 units of low-income housing at the decommissioned Fort Lawton site in Magnolia, 13 years after the process began. In July, after four years of delay, the council again voted unanimously to ease regulations on backyard cottages and basement apartments in an effort to incentivize their construction.

Politics are notoriously slow moving in Seattle and certainly complex housing policies like MHA take time to hash out. But it wasn’t the “Seattle process" that added years of delay to housing reform and the addition of new affordable housing in the city. It was a state environmental law that gives individuals tremendous power to slow down or stop land-use changes. Using that law, the State Environmental Policy Act (SEPA), citizen groups have slowed neighborhood rezoning, as well as new apartment buildings for both Amazon employees and people exiting homelessness.

In the midst of an ongoing affordable housing and homelessness crisis, this presents a challenge for elected officials pushing for more density and the rapid development of affordable housing options. Now lawmakers in Seattle and the Legislature are working to reform the nearly 40-year-old environmental law and limit its power. They point to the long delays SEPA can cause and argue that the law requires needlessly redundant environmental review for urban development.

“As we’ve tried to achieve our statewide Growth Management Act goals, we’ve found SEPA delays those goals,” said state Rep. Joe Fitzgibbon, who sponsored a bill in the 2019 legislative session that limited opportunities to use SEPA appeal. “I don’t want to eliminate environmental review in places where it’s adding environmental value. But in places where SEPA is duplicating environmental review and being used as a tactic to just delay housing production, I think there’s reforms we can make to reduce those conflicts.”

Washington enacted SEPA in 1971 to require governments and companies to consider the potential negative environmental impact of their projects. When a developer is proposing a new housing project of a certain size or a city government is considering a land use change, they must complete a SEPA review.

Each review details the potential negative impacts a project could have on a laundry list of elements in the surrounding environment, from air, water, plants, noise and light to utilities, transportation, parking and aesthetics. After completing the list, city officials decide whether the impacts are considered significant. If no, the project receives a Determination of Non Significance (DNS) and moves forward. If yes, the project must undergo a much more comprehensive environmental review that often takes more than a year to complete and results in an Environmental Impact Statement (EIS). Sometimes that process results in requirements that a policy or project be adjusted to better mitigate its impacts.

But even a clean bill from that initial review may be just the first step in a long, drawn-out process. If a project or land-use change receives a DNS, anyone with $85 to spare for a filing fee and the wherewithal to make their case can appeal by arguing that the impacts are in fact significant and merit a full review. When this happens, a city hearing examiner takes up the case, looks over the evidence presented by both sides, and makes a ruling to either uphold the determination, or send the project for the full review. The hearing examiner process itself can take six months or more to complete.

If a project or plan has undergone a full environmental review, SEPA also gives citizens the ability to appeal the final EIS on the grounds that the project or plan either does not fully consider its negative impacts or does not do enough to mitigate those impacts.

In the case of the backyard cottage reforms, both types of appeal were at play. The city council first introduced its proposal in early 2016. In May of that year, city officials gave the proposal a determination of nonsignificance. Led by the Queen Anne Community Council, opponents filed a SEPA appeal the following month. Six months later, a city hearing examiner sided with the opponents and ruled that the city had to do a full environmental review.

It took until October of 2018 for the city to complete that full review process. The following month, the same opponents filed another appeal, alleging that the final impact statement failed to offer less impactful alternatives to the city’s plan and did not sufficiently consider the unique character of each neighborhood. Once again, the issue went to a city hearing examiner who took until May of this year to make a ruling. This time they decided in the city’s favor, allowing the plan to move forward.

Though the lengthy appeals process yielded some changes, it did not alter the core of the city’s plan, which allows a single-family homeowner to build both a backyard cottage and a basement apartment on their lot, instead of one or the other. Opponents argued that this fundamentally changed single-family zoning in Seattle and it would have adverse impacts on aesthetics, socioeconomics, parking, utilities, among other issues, but the appeals did not change the policy’s core reforms.

“With [backyard cottage reform] and MHA, we had thousands of units that did not come online during a time we have an acute housing shortage,” said Fitzgibbon. “SEPA appeals didn’t materially impact what those policies looked like. They were just delays.”

Dan Bertolet, a researcher with the pro-housing environmental think tank Sightline, sees several key flaws in the way SEPA is applied to housing construction. For one, the review required by SEPA can be largely redundant to the environmental review that cities require a project go through. For example, a developer must meet the city’s minimum parking requirements and design-review board standards, in order to receive a building permit for a project. Bertolet argues that re-reviewing those same issues through SEPA is just time and money wasted.

Another flaw in the state environmental law, in Bertolet’s eyes, is that it only looks at negative impacts and has no provision for considering positive environmental impacts. Proponents of SEPA reform like to point to the Bullitt Center on Capitol Hill to illustrate this point. Considered one of the greenest buildings on Earth, the project was subject to SEPA appeal because it didn’t provide parking and its solar panels would cast shadows.

In the case of denser urban housing, Bertolet argues that the environmental benefit is being ignored by SEPA currently. By providing more housing in the urban core, Seattle can reduce the need for sprawling suburban and rural development, and reduce the amount of long-distance commuting required by people who work in the city and live in the suburbs.

“None of that can count against the fact that the building might cast a shadow on a park for an hour a day,” said Bertolet. “It’s always seemed to me that SEPA needs a core rewrite on that fundamental concept [of not considering positive environmental impacts] in the face of climate emergency.”

It is for all those reasons that Fitzgibbon pushed for some limits to SEPA appeals as part of a housing density bill he introduced and the Legislature passed last spring. The heart of the new law is a menu of things Washington cities can do to increase density, such as allowing backyard cottages in single family zones; allowing duplexes and triplexes in single family zones; and allowing larger buildings near transit hubs. In exchange for doing them, the cities are eligible for a $100,000 grant to help with planning. And, importantly, the law makes all of those actions exempt from SEPA appeal. Projects still must undergo SEPA’s environmental review, but once the review is complete, citizens cannot take the project through the potentially years-long appeals process.

Yet this protection from SEPA appeal is temporary. Cities must enact their pro-density policies before April 2021 in order to garner the protection.

In October, the Seattle City Council unanimously adopted its own version of SEPA reform. At its core, the city council legislation is just an affirmation that Seattle is now using the new SEPA appeal protections provided by the state. For example, from now until 2021, upzones around transit hubs will be protected from SEPA appeal. Further reforms to the city’s backyard cottage and basement apartment legislation would also be exempt from appeal.

After the legislation passed, Councilmember Abel Pacheco said in a statement that “SEPA has too often become weaponized to intentionally delay projects that had broad consensus.” And that reform will streamline Seattle’s process for building housing.

The council legislation goes beyond the  Legislature’s recent SEPA reform. It limits SEPA appeals hearings to 120 days and prevents appeals based on economic impacts. For buildings in Seattle’s urban centers, the reform raises the threshold for mandatory environmental review from 20 units to 200 units.

“Smaller, denser housing is also just inherently more environmentally friendly,” said Brittany Bollay, chair of the Sierra Club’s Seattle Group. “If you live in the suburbs and want to do anything in the city, you have to drive. When transportation emissions are the majority of the emissions we’re putting into the air in Seattle and King County, anything we can do to get people out of their cars is massively important.”

The SEPA reforms passed by the state and city are limited and temporary. But Fitzgibbon sees them as a start to broader reforms to how SEPA impacts housing. He’s already working on legislation to potentially introduce in the 2020 session. It would remove parking from the SEPA checklist and bar SEPA appeals based on project aesthetics if a project has already gone through design review.