The measure, aimed at companies with highly paid workers, could allow the county to raise up to $120 million a year. 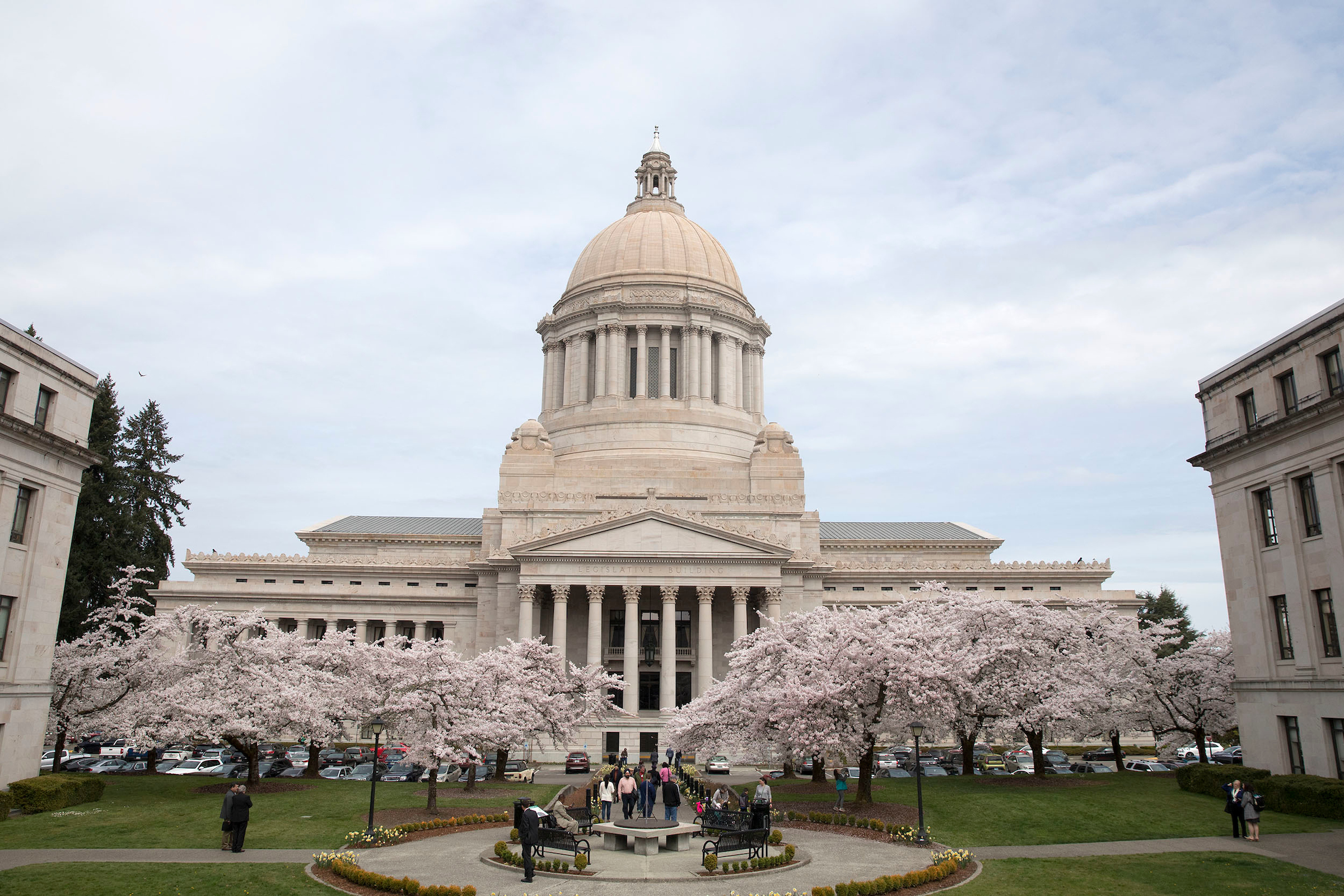 Democrats at the state Capitol want to help King County raise money to address homelessness through a new tax on businesses, a move that echoes the 2018 debate over assessing a so-called “head tax” in Seattle.

The state legislation, introduced Wednesday, would allow “counties with populations over 2 million to impose an excise tax on business.”

Only King County, the state’s most populous, exceeds that population threshold. All other counties in the state are home to fewer than 1 million people.

The proposal in the Legislature wouldn’t actually enact a new tax, but would give King County the option to do so through a local ordinance.

King County Executive Dow Constantine and Seattle Mayor Jenny Durkan are among the key supporters of the effort.

If the bill passes, the King County Council could enact the new tax without sending it to voters for final approval, according to the bill’s language.

Without a change in state law, King County wouldn’t be able to pass a tax like this.

State Rep. Nicole Macri, D-Seattle, said her goal in sponsoring the measure is to give King County more resources to address homelessness on a regionwide basis, as opposed to city by city.

“The thing I am interested in is something that will allow for more of a regional approach on addressing homelessness, housing and behavioral health needs than what the current authority allows,” said Macri, who is the deputy director for strategy at one of Seattle’s largest homeless services agencies.

Seattle and King County recently agreed to create a new governmental body that will be jointly responsible for managing the county’s homelessness crisis.

But right now under state law, many types of taxes “are authorized at the municipal level, and not at the county level,” said Macri.

Under House Bill 2907, counties could enact a 0.1% to 0.2% tax on companies’ total payroll. The idea is that only larger businesses with higher-paid workers would be affected: Companies wouldn’t have to pay the tax if all of their employees make less than $150,000 per year. For companies that have a mixture of workers making above and below that amount, the lower-paid employees’ salaries would be deducted for purposes of calculating the tax.

Exemptions would also be provided for grocery businesses, as well as for small businesses with 50 workers or fewer, if at least half their employees make under $150,000.

Money from the tax could be used to build, buy or operate affordable housing; pay for supportive housing units; provide rental assistance to low-income individuals; or provide for housing, shelter and evidence-based interventions that address and prevent homelessness.

Some of the money could also go toward behavioral-health treatment programs.

State Rep. Gael Tarleton, a Seattle Democrat who chairs the House Finance Committee, said she is trying to hold a hearing on the measure on Tuesday, Feb. 4.

A significant portion of the revenue generated by the countywide tax would go toward “the city with the highest population of people experiencing homelessness.”

At least for now, that would be Seattle.

Countywide, the tax could raise as much as $120 million per year, Seattle city officials estimated.

Mayor Durkan’s office said Wednesday that the mayor has been closely involved in crafting the legislation. “This is step one of many, many, many steps that needs to happen,” said Durkan Chief of Staff Stephanie Formas.

Under the best case scenario, Formas said, the mayor’s office would hope to begin collecting revenue by Jan. 1, 2021.

In a joint statement Wednesday, Durkan and Constantine said they were in favor of the measure, writing that “because of our regressive tax code, King County has limited revenue options.”

“This crisis demands more tools for the region outside of property and sales taxes,” Durkan and Constantine’s prepared statement said. “Many of the region’s largest businesses, with deep roots in our community, want to participate in solutions, and want to do so with a comprehensive, countywide approach to homelessness, housing, behavioral health and public safety. We agree, and this bill is a strong step in that direction.”

The mayor’s office said small and large businesses, as well as labor and service providers, were involved in discussions about the new tax proposal.

In a statement, Marilyn Strickland, CEO of the Seattle Metropolitan Chamber of Commerce, said chamber members were still evaluating the proposal to “determine whether it would be smart public policy.”

Companies including Amazon and Microsoft would almost certainly would be subject to the tax. A representative for Microsoft did not immediately respond to a request for comment; a spokesperson for Amazon said the company is reviewing the bill.

At least one large employer in the region is supportive. Expedia Group’s Chief Legal Officer Bob Dzielak said in a statement that the company is “proud to contribute toward the revenue needed to address these issues.”

At this point, no Republicans in Olympia have signed on to Macri’s bill as co-sponsors. House Minority Leader J.T. Wilcox, R-Yelm, said Democrats are always proposing to tax businesses as opposed to coming up with other ideas. “Because it is the answer to everything, it's almost a sign of unserious intent,” Wilcox wrote in a text message.

King County Councilmember Reagan Dunn, who has run for statewide office as a Republican, called the  new proposal “just Seattle’s failed head tax with a new coat of paint.”

The state legislative effort comes amid a new political reality at Seattle City Hall, in which a fresh city council is near unanimous in its belief that the city and region needs additional revenue to combat housing and homelessness.

In the early months of the new council, however, the path forward has been a muddled mix of ideas and political considerations, with some officials looking to finish what the city began in 2018 and others hoping to avoid repeating the contentious fight over a possible business tax.

The measure introduced Wednesday in Olympia would not block Seattle from enacting its own tax on top of the one that could be imposed countywide.

Conversations have been going on for some time about whether Seattle should revisit its own business tax or work with the county on a regional funding solution.

Seattle City Councilmember Kshama Sawant’s attempted revival of the so-called head tax — applied to the city’s largest businesses on a per-employee basis — has received the most attention, in part because it echoes the city’s ultimately doomed 2018 effort and because Sawant has made it almost entirely about Amazon.

Councilmember Lisa Herbold, who’s long advocated for a payroll or hours tax, said Wednesday she was happy to see the state proposal move from a “longshot” several weeks ago to reality. “From a perspective of somebody who feels progressives of all stripes have been seeking revenue to address the greatest need of our region… it’s gratifying that there seems to be a coalition coming around that concept.” Herbold said it would likely not meet the region’s need, but would “establish the principle of progressive taxation” as an alternative to a property or sales tax.

One persistent fear in City Hall is that the council may again be accused of asking for money without a plan for spending it, a particularly salient talking point in the last head tax debates.

Formas of the mayor’s office said Durkan will lay out a plan for spending the money to county and city officials if and when a new tax is being considered.

At the same time, representatives from the Third Door Coalition — a combination of business leaders and homeless advocates that formed in the wake of the head tax debate — have begun briefing some city officials on their own plan, which will recommend raising $1.3 billion to build 4,500 additional permanent supportive housing units to address chronic homelessness, according to people briefed on the plan.

Sara Rankin, a Seattle University professor and one of the coalition’s members, declined to outline the group’s exact plan until all the details have been solidified. But, she said, coming to the table with a plan and support from both business representatives and homeless advocates would make passing a new revenue source more likely.

“There’s a real hunger from folks on all sides for a solution,” she said.

Chad Mackay, CEO of Fire and Vine Hospitality and member of the Third Door Coalition, said he grows tired of the fights over the homelessness crisis. “What most of the people want is to come to a solution and realize that we’re better off talking through it to come to some solution than to just declare war on each other,” he said. “If you’re going to bitch, you better do something about it. If not, shut up.”

Local progressives, meanwhile, are trying to add pressure by working to put an even larger business tax before voters. They envision a ballot measure that could raise between $200 million and $500 million a year.

“We intend to build a grassroots campaign,” said Mimi Harris of the Seattle chapter of the Democratic Socialists of America. “We’ll be on the corner in every neighborhood fighting to tax big business.”