‘Terrifying to do, and so much fun’: Teen angst is for all ages in the new play ‘Dance Nation’ 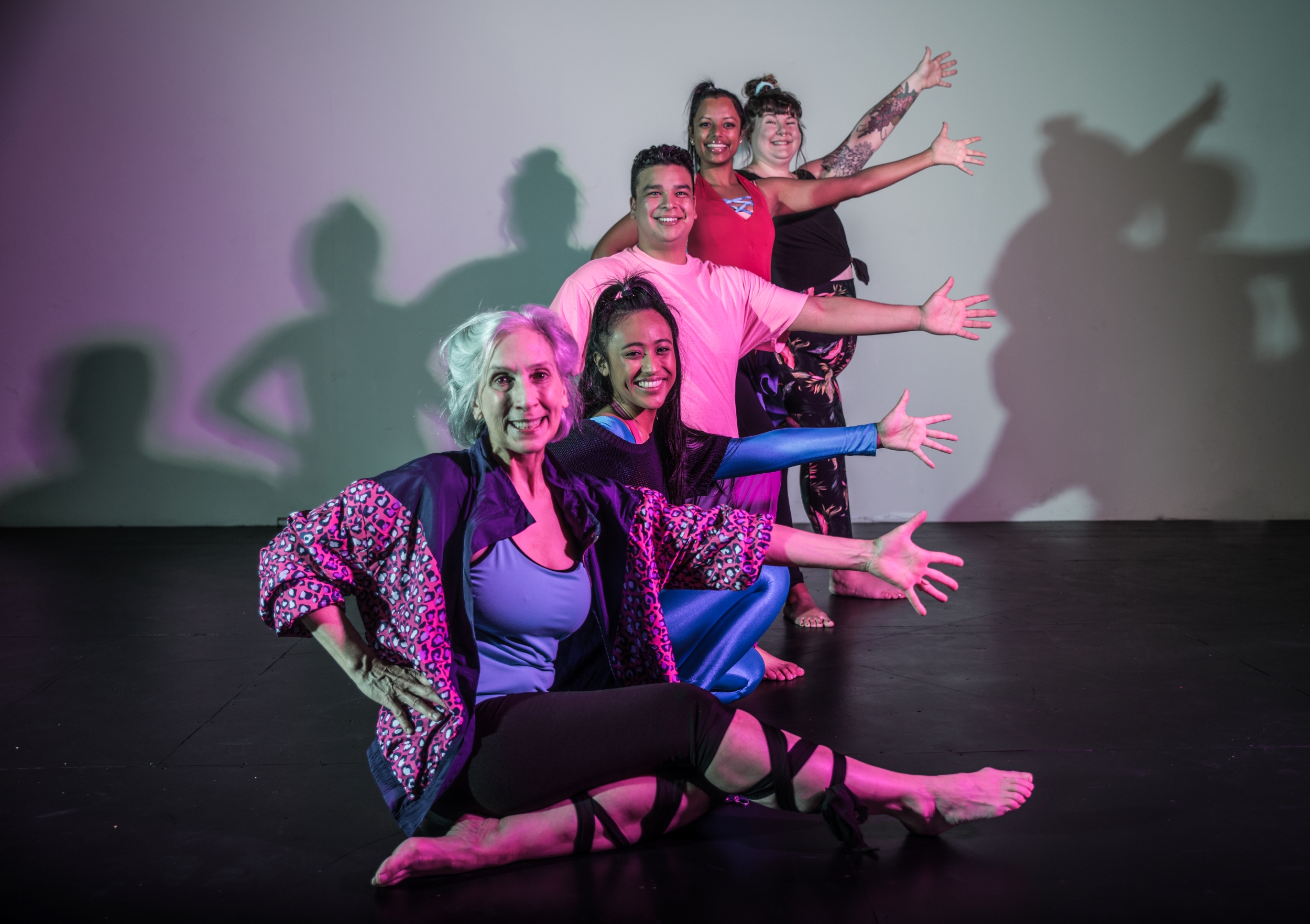 The cast of ‘Dance Nation’ at Washington Ensemble Theatre. A finalist for the Pulitzer Prize in drama, the play recommends creative casting for the young dancer roles. (Willy Picton)

On a bare stage in Capitol Hill’s 12th Avenue Arts building, Alyza DelPan-Monley is putting a group of dancers through their paces. Encouraging and exacting, the dexterous, curly haired choreographer drills them on a series of moves set to thumping electronic music. She demonstrates slinky hip thrusts, a sexy toss of the head, and calls out, “Hit it and hold it!” as she leads her crew through a series of poses that resemble voguing.

The steps look straight out of a pop music video, but most of the booty-shaking cast in Washington Ensemble Theatre’s performance of the play Dance Nation are new to dancing roles. And that’s part of the point.

Written by Clare Barron, the play was an off-Broadway hit — hailed as the poetic progeny of the musical A Chorus Line and a dance competition reality show — and rewarded with a Pulitzer Prize nomination.

In the script for this imaginative rendering of a prepubescent, competitive dance team in the small community of East Liverpool, Ohio, Barron specifies that the characters are in their early teens, but “should be played by (mostly adult) actors,” ranging up to age 75. And, Barron stresses, “The more diverse the cast in terms of race, sexuality, backgrounds, bodies, souls, etc., the better.”

That was top of mind for co-directors DelPan-Monley and Bobbin Ramsey during auditions for the show. Says Ramsey, “Everybody can be and is a dancer. So a wide variety of every sort of body is represented, in an effort to talk about growing up in a way that’s universal.”

This philosophy resonated with Maggie L. Rogers, a Seattle-based, self-described “fat activist,” and the incoming artistic director of WET, whose essay “All Sizes Fit All: The Case for Normalizing Fatness Onstage” appeared in American Theatre magazine in 2018.

“It was really important for me to do this show,” says Rogers, who portrays the insecure dancer Maeve. “Starting from the audition process, Alyza has made us feel so supercomfortable and empowered. I decided I was never going to wear a skirt to rehearsals.” Instead of covering up her body, Rogers wears form-fitting tights and leotards.

In searching and sometimes profane monologues, group chants, one-on-one conversations and in numerous solo and group dance routines, the young movers display surges of maturity, fear and defiance. They embrace the power of their developing bodies and the onset of menstruation; they reveal suicidal feelings. They cling to vestiges of childlike wonder (one girl believes she can fly, another preteen recalls creating a dance she hoped would cure her mother’s cancer) and voice idealism about “changing the world through dance,” Ramsey says. “No one has told them ‘you can’t’ yet.”

It is up to the actors to capture their inner lives, as they navigate the sometimes perilous border between childhood and adulthood, while executing the choreography that gives Dance Nation its kinetic energy. And they will be performing on a dance studio set backed by a line of full-body mirrors. To put it mildly, that can be very intimidating — whether you’re in your 20s, 30s or 60s — particularly dancing a sequence they jokingly call “Sexy Baby Robots.”

For actor Sofía Raquel Sánchez (who uses they/them pronouns), leaping into the competitive dance scene evoked in the play brings up deeply personal memories from their own youth. “I started dancing at about 4,” says the Cornish College graduate, the only ballet-trained professional dancer in the cast. “It’s really phenomenal to go back into that world. I’m thinking, oh my God, this is who I was when I was growing up in Centralia and in the closet! Dance training was such an important outlet for me.”

Their character, Amina, represents another important aspect of Dance Nation: the cutthroat rivalry experienced by young girls (the play also specifies one boy dancer, played by Mikey Flores). They vie for the leading role in a number, an entirely earnest piece about the life of Mahatma Gandhi, devised by their male dance teacher, Pat (portrayed by Nik Doner). Pat rallies and sometimes bullies his students for a contest he wants to win as much as they do: the Boogie Down Grand Prix, a youth dance contest held in Tampa, Florida.

Amina has been the undisputed star of the team. But her standing, as the often-praised and most obviously gifted dancer, brings her as much anxiety as glory — something anyone who’s ever been at the head of the class can empathize with. “She has the intense pressure on her to always be the best,” observes Sanchez, “and to just get better and better.”

However, Amina does not go unchallenged for the plum part of Gandhi. And as solos are parceled out, friendships are frayed and forged, and Dance Nation widens its focus to explore an array of the intimate concerns of girls as they undergo major biological and behavioral changes.

Ramsey points out that having grown women play girls on a dance squad (another female actor portrays multiple “dance moms”) is much more than a casting gimmick. “We see them really as ghosts of themselves at that age, adult versions lingering in the memories of their preteen selves,” she says. “It’s a way of talking about growing up that makes the characters rich and complex.”

“I felt this play would be terrifying to do, and so much fun,” says petite, silver-haired Marty Mukhalian, who plays the young and world-wise Sofia. Through her long and busy acting career with such companies as Book-It Repertory Theatre and Seattle Shakespeare Company, Mukhalian never expected to be busting so many moves on stage. Especially at age 61.

But, she confides, “I’ve always wanted to be a dancer. I grew up wanting to be Juliet Prowse.” (Prowse was the glamorous, famously limber star of Can-Can and other 1960s movie musicals.)

And despite the generational gap between herself and her character, says Mukhalian, “These issues in the world of 13-year-olds are not so distant for me. You have a lot of the same angst at my age.”