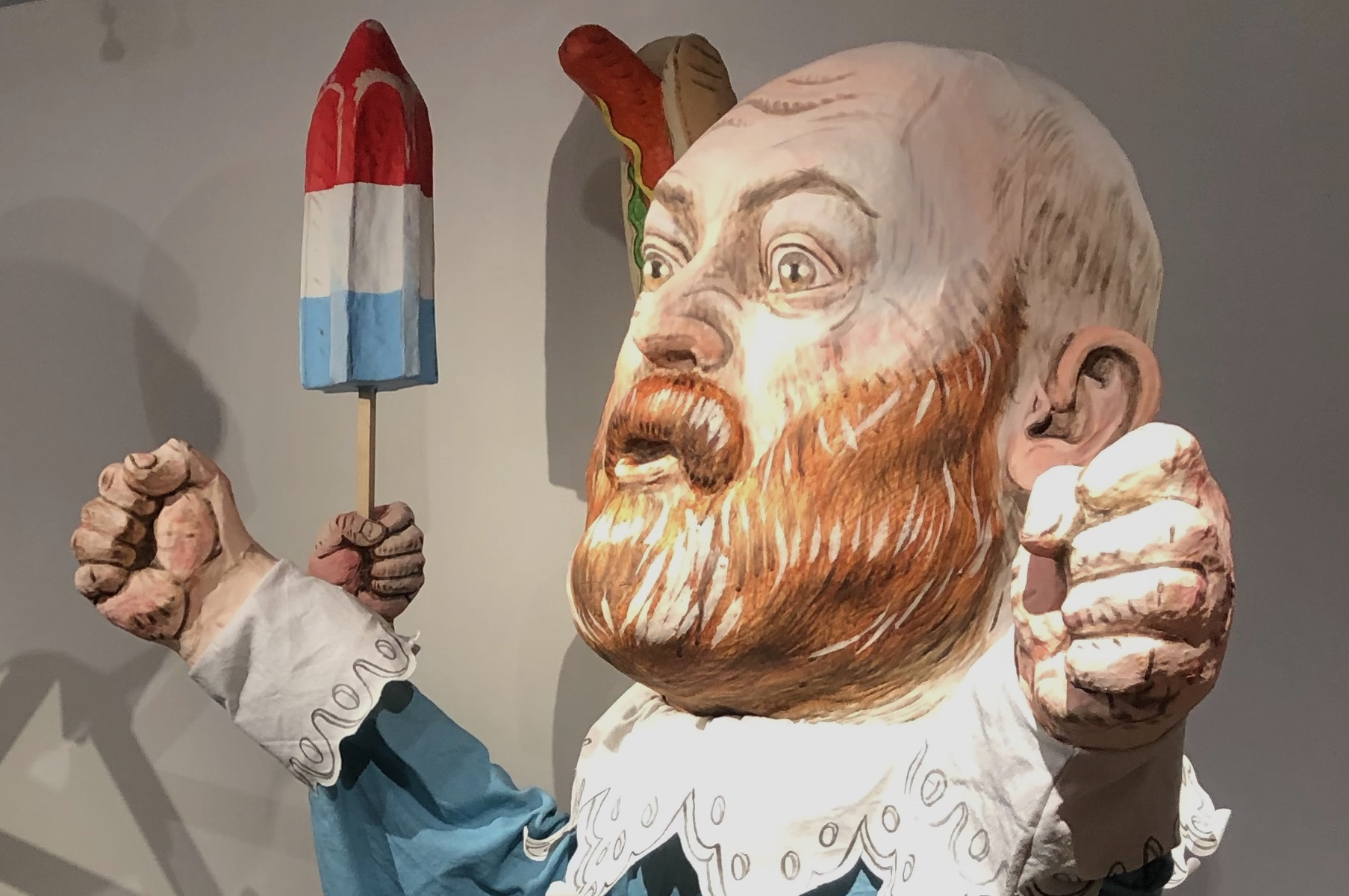 Ryan W. Kelly: A Forest for the Trees

A bald, bearded head with fists raised, a phalanx of food on sticks — Northwest artist Ryan W. Kelly says his papier-mâché-style creations are the spawn of “half-cocked dream logic.” Intentionally artificial, and calling to mind caricatures from old-fashioned circus banners, the objects appear ready-made for a traveling vaudeville show — one with a decidedly dark edge. While Kelly's expertise is in clay (he’s currently an assistant professor of ceramics at Western Washington University), his art ranges from performance to prop creation for theater, dance and film — including work on Isabella Rossellini’s marvelous Green Porno series. In A Forest for the Trees, he fills the gallery with oversized, carnivalesque masks and puppets, some of which are self-portraits (including a version of himself as a flattened bear rug), others suggest characters from myth and legend (a devil, a wreathed donkey). But Kelly wants to make clear “this is not an elegant metaphor.” On the contrary, he writes, “This is my ham-fisted dream interpretation.” –B.D.

Mouth, lip, neck, shoulder, belly, foot. The words we use to describe parts of a pot, argues pottery scholar John A. Burrison in his book Global Clay: Themes in World Ceramic Traditions, suggest that potters have always known vessels somewhat resemble bodies or faces. “Is it any wonder, then,” he writes, “that potters the world over see clay as … a reflection of their humanity?” For ages and around the world, humans have sculpted clay vessels in their likeness, whether overtly or abstractly. In the U.S., enslaved people in South Carolina practiced a folk art form known as “face jugs” or “face vessels” (later appropriated by white potters in the area). Inspired by an exhibition featuring such face-based vessels, as well as his mother's “funky ’70s pottery” and a general penchant for portraiture, local artist and “novice” potter Chris Buening showcases his brand-new series of ceramic Empty Heads at SOIL Gallery. –M.V.S.

When flamenco guitar is perfectly paired with the rhythmic taps of a dancer’s feet and the chants of a singer’s voice, the combination emits an energy dubbed “duende,” translated as “spirit.” It’s similar to the propulsive energy produced during jazz improvisation. Like jazz, flamenco, a century-old folkloric dance style from Spain, is best experienced live in an intimate venue. And you’ll have the chance to do just that at Columbia City’s Royal Room this weekend. Amelia “La Rubia” Moore, a University of Washington alum, has stomped her feet and clapped her palms (referred to as “palmear”) to flamenco for more than a decade. She studied under Sara de Luis, a master flamenco dancer and former Pacific Northwest Ballet teacher and Seattle Opera choreographer. Moore will perform alongside special guest percussionist Luis de la Tota (who hails from an old Romani town in Jerez, Spain) and vocalist Daniel Azcarate. The Royal Room’s dimmed lights and small stage are a perfect setting for the powerful and spirited flamenco, which demands all your attention. –A.P.F.

“Language is the next frontier of modern gender equality,” posits writer, linguist and self-described “word geek” Amanda Montell. It's a bold claim, but one that Montell makes with gusto in her debut book Wordslut: A Feminist Guide to Taking Back the English Language, a scintillating examination and takedown of the English language, specifically its role in propping up the patriarchy. Why do the majority of insults for men involve some connotation of femininity? What is vocal fry and how did it emerge? When did “like” become a common American verbal tic, and what social functions does it serve? Montell's visit to Elliott Bay Book Company offers the perfect chance to ask her such questions, as well as how the book will be adapted for television. Maybe you'll even get a tip or two on how to shut down cat callers and overzealous grammar police, swear like a feminist and use “other ways to verbally smash the patriarchy.” –M.V.S.

Last year, as part of his very long “Farewell Yellow Brick Road Tour,” Elton John gave his “final performance” at the Tacoma Dome, marking the last time (supposedly!) the iconic musician will sing and play piano in Washington. (The tour isn't set to end until the end of 2020, but the artist won't make anymore stops in the Evergreen State.) If you missed the chance to watch Elton do the “Crocodile Rock,” don't worry, you can still hear his music — and be dazzled by his talent — thanks to the new laser show dedicated to the legendary, dazzling musician. The Pacific Science Center is debuting an hourlong show set to towering pop tunes created and sung by the one and only “Rocket Man.” The Pacific Science Center has slowly been adding new artists to its laser dome tributes over the past year, including “Laser Tame Impala,” “Laser Lizzo” and “Laser Solange,” with more on the way. “Laser Elton John” is the first of the new shows scheduled for 2020. If the event is anything like the man himself, expect an over-the-top, eye-popping experience. –A.P.F.

The giant, billowy forms made by New York-based artist Ian McMahon look like ideal spots to sink into for a comfy nap. But his bouncy looking sculptures of bulging white pillows are anything but soft — they’re made out of plaster and steel or wood. McMahon creates them by inflating enormous plastic bags, into which he sprays plaster with a spray-gun appliance. The ensuing laborious process of peeling off the plastic from less-than-an-inch-thick layers of hardened plaster is somewhat of a performance in itself, says Emily Kelly, director of MadArt in South Lake Union. During the three-week installation of McMahon's new large-scale installation, Aperture, visitors and passersby can witness the work-in-progress up close. The billows will be finished and affixed in place by Jan. 26 for a public opening — which you can take literally, since for the first time ever, McMahon will offer visitors a peek into the interior of his sculptures. –M.V.S.

A nose pokes out from a white, fluffy cloud as if to smell the sky. A pair of red lips make a snow-capped mountain look somewhat human. Gnarled knots in brown tree bark have eyes. Mimi Sturman's sculptural creatures, felted from Icelandic wool with a single needle, seem to have jumped straight out of the artist's dreams and into Lynn Hanson’s Pioneer Square gallery. In her new solo show, prickly plush sculptures collectively evoke a myth of Sturman's making, in which three sisters from another planet arrive on pollution-riddled Earth (represented by a black, woolen ball). In a last-ditch effort, the sisters attempt to save the Earth by sucking up the pollution, serving as the vacuum cleaners of the universe. A surreal tale with real-world echoes. –M.V.S.

If you go: Lynn Hanson Gallery, through Feb. 1. (Free)

Over the course of his epic music career, Prince Rogers Nelson went by any number of names — Jamie Starr, The Artist Formerly Known as Prince, The Purple One — but for this show at MoPop, he’s simply called Prince From Minneapolis. The emphasis on his hometown reflects the content of the show, organized by the Weisman Art Museum at the University of Minnesota. The collection showcases striking work by several Minneapolis photographers who Prince sought out to help craft his image, and illuminates the artist’s intense connection to his city. The 50-some artifacts also reveal the inspiration Prince provided to visual artists, including Seattle’s own Troy Gua, whose meticulously crafted “Le Petit Prince” doll pays small-scale homage to the giant music legend. Read our profile of Gua, and see his incredible, handcrafted Prince outfits and staged scenes. –B.D.