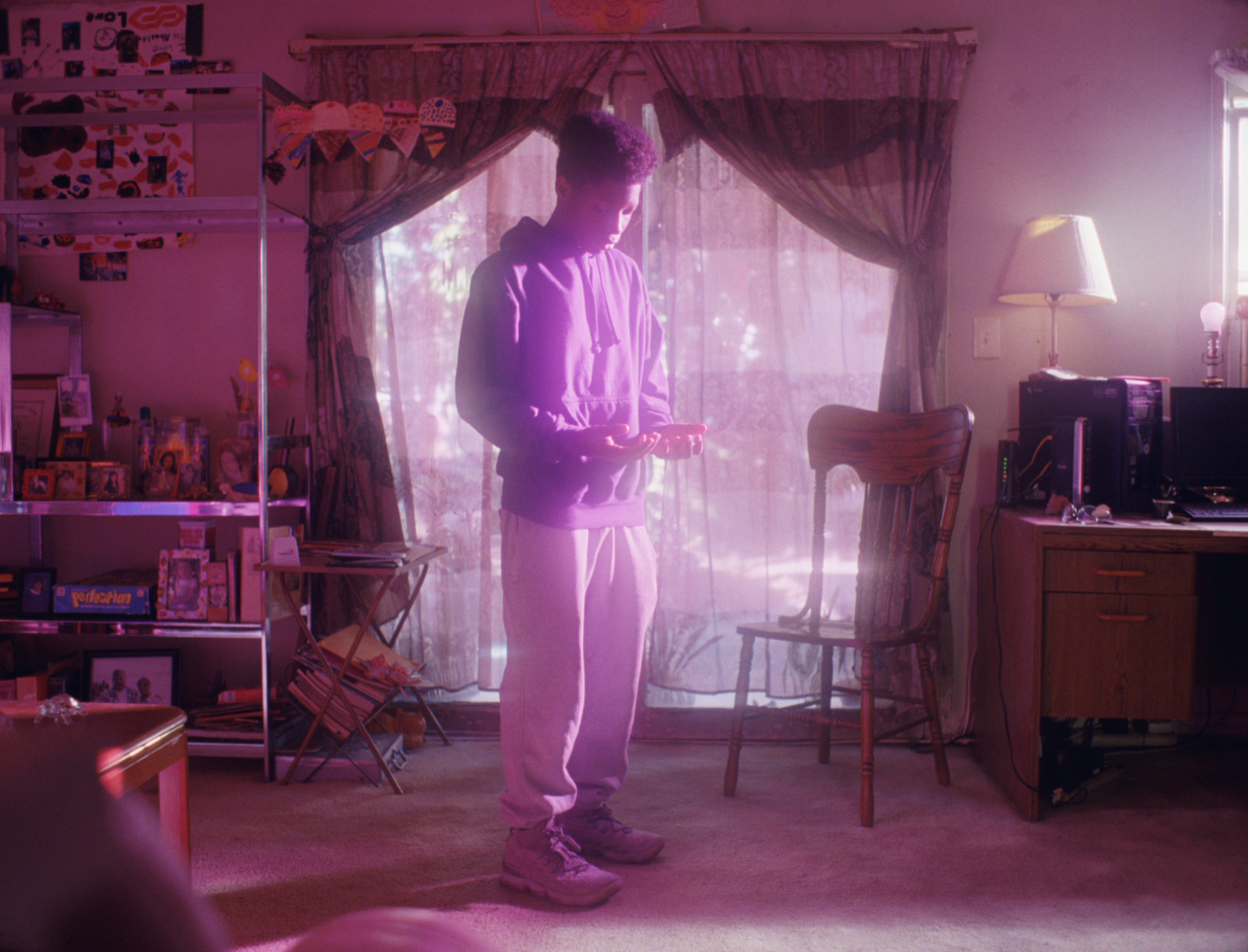 A still from the film "Godchild," by A.G. Rojas, which pays homage to musicians Duke Ellington, John Coltrane, Miles Davis and Louis Armstrong. It's one of several artworks commissioned by the Smithsonian for the traveling exhibit 'Men of Change,' currently at the Washington State History Museum. (A.G. Rojas)

The bodies of two nude runners — with tastefully placed scarves swirling around them — are cast in a pale bluish glow against a darkened backdrop. Their legs cross midstride as the young woman stoops to pick up a golden apple from the ground. The early 17th century oil painting Atalanta and Hippomenes, by Italian Renaissance painter Guido Reni, depicts the myth of Atalanta, in which Hippomenes tricks the virgin huntress into marriage by distracting her with golden apples during a footrace. But it could very well be a snapshot of two dancers on a stage, their soft curves and toned muscles luminous in the spotlight. It’s fitting, then, that the Seattle Art Museum, where the painting is on view as part of the blockbuster Renaissance painting show Flesh & Blood, asked two performers to dance in front of it. Italian-born and Seattle-based dancer-choreographers Alice Gosti and Lavinia Vago will each perform a solo inspired by the painting and the theme of “devotion,” followed by an informal Q&A. –M.V.S.

Because of the holidays, some — but not all — Pioneer Square galleries decided to hold the traditional First Thursday Art Walk on the second Thursday of the month (Jan. 9). This led to some mild chaos among artgoers last Thursday but, hey, aren’t two art walks better than one? Head (back) out and be sure to stop by excellent new gallery J. Rinehart, where Seattle artist Shaun Kardinal presents Present Tense. Kardinal combines vintage landscape imagery with meticulous, geometric embroidery to evoke a geographic nostalgia and a sense that such memories are in need of stitching up, given the climate crisis. Accordingly, the artist is donating proceeds to the Sierra Club Foundation. Also in stitches is the wild craftwork of Northwest artist Ross Palmer Beecher, who uses ages-old techniques to create quilts made from flattened coffee cans, neckties, gum wrappers and her sense of humor — as in “Downton Abbey Quilt,” which incorporates teapot spouts. And at Linda Hodges Gallery, local painter Klara Glosova presents a new collection of work that includes a watery sketch of a tiger standing on a chair (an homage to big-cat trainer Mabel Stark), and group of female anthropologists wearing hazmat suits in the face of disaster. The show is called Ex Lion Tamer, which Glosova told me “is less about training tigers (unless you count my internal beasts) [than] a metaphor for a way of living life fully and making art without holding back.” Fierce. –B.D.

Tales of the Alchemysts Theatre is an ensemble of local stage professionals led by Shellie Shulkin and Laura Ferri, who, in their own words, are “committed to bringing provocative and entertaining Jewish literature, Jewish writers and live music to those who have an interest in good storytelling, and a desire to explore ideas relevant to humanity.” Their show Dreaming in American features live music, spoken word and excerpts of writing by prominent Jewish authors ruminating on “dreams lost, found and mutated in circumstances that still resonate among immigrant populations today.” Included in the mix are works by Anzia Yezierska, Bernard Malamud and Sholem Asch, with a storytelling focus on immigrants who fled the devastation of the Old World and landed in New York's Lower East Side. This performance marks the final stop on a tour around the Puget Sound region. –M.B.

When you hear the word “Nordic,” what comes to mind? Fjords and snow. Perhaps fish, Northern Lights or hygge, and maybe Scandinavian design. But jazz? Despite the perhaps surprising connection, that’s exactly the kind of music that will reverberate through the National Nordic Museum’s concert hall on Sunday. Nikolaj Hess, a celebrated Danish jazz pianist, improvisational artist and composer (who film buffs might recognize as one of the score composers behind Lars Von Trier's 2011 movie Melancholia), kicks off the museum’s new season of Nordic concerts with a tribute to the Danish painter Laurits Andersen Ring (1854-1933), whose often moody canvasses are on display at the museum until Jan. 19. –M.V.S.

How to Raise a Reader: Pamela Paul and Maria Russo with Maria Semple

Ever wondered how to get your little one to become a bookworm, or even just to appreciate the joy of reading? Leave it to two pros to detail exactly how to do it — without making it a chore. Pamela Paul and Maria Russo, respectively, are the editor and children’s books editor of The New York Times Book Review. Their book How To Raise a Reader is a handy guide to getting your kids hooked on books. They recommend starting as early as the cradle, since “research has shown that the number of words an infant is exposed to has a direct impact on language development and literacy," they say. Some hands-on advice: “If you want to raise a reader, be a reader” (so pick the habit back up if it has fallen by the wayside) and, sorry Potter-heads, “Don’t push Harry Potter too early.” At Town Hall, Russo and Paul will talk about their book with local author Maria Semple (Where'd You Go, Bernadette?), and send the audience home with curated reading lists, plus tips on winning over a reluctant reader and building a family library. –M.V.S.

Fiddler on the Roof

The beloved Broadway musical about inhabitants of a Russian Jewish shtetl (village) who will soon be forced by religious persecution and economic hardship to emigrate, comes to the Paramount Theatre in a new national tour. The comical and poignant tale of the beleaguered dairy farmer Tevye (played by Israeli film and TV star Yehezkel Lazarov) is drawn from stories by Yiddish author Sholem Aleichem (nicknamed “the Jewish Mark Twain”), and presented in a fresh staging by Bartlett Sher, the former director of Seattle’s Intiman Theatre. This well-received Broadway revival departs somewhat from the original 1964 production and the popular 1971 movie version of Fiddler.

Don’t worry: the familiar score by Jerry Bock and Sheldon Harnick is still there, including “If I Were a Rich Man” and “Tradition!” But choreographer Hofesh Shechter puts his own spin on dances originally created by director Jerome Robbins. And Sher’s thoughtful vision of the tale adds subtle links to the new homeland where Tevye and many of his brethren are headed. This is a more modern Fiddler, but one that still contains the joy of tunes like “L’Chaim! (To Life!),” and the sentimental tug of the enduring marriage waltz “Sunrise, Sunset.” –M.B.

Witty, lusty, gossipy, romantic: Restoration-era stage comedies are the prototype for generations of clever modern-day rom-coms. Now Seattle Shakespeare Company is tackling one of the most influential of them all, The Rivals by Richard Brinsley Sheridan. Flush with British ladies and gents bearing Monty Pythonesque names (Capt. Jack Absolute, Sir Lucius O'Trigger, Lydia Languish and the famously word-mangling Mrs. Malaprop), The Rivals is a supreme 1775 comedy of mis-manners. Set in the resort town of Bath, where the courtship of young Jack and Lydia faces considerable challenges, the proceedings include a love triangle, a duel and (of course) people pretending to be who they’re not. Under George Mount’s direction, the cast is required to cavort, flirt and bandy about enduring witticisms — all in high style. Sheridan’s first and best known play (so vilified by critics, he rewrote it during the initial run) demands no less. –M.B.

Suspended on steel bars, light boxes illuminate the faces and words of Black men who have made an impact on American history. Some, such as former President Barack Obama and Pulitzer Prize winning rapper Kendrick Lamar, are easy for contemporary eyes to spot. Others might not be as quickly recognizable, but their impact is well known, such as Carter G. Woodson, who dedicated his life to preserving Black history and who established Black History Week in 1926. The contributions of these and other Black men (LeBron James, Alvin Ailey, Ta-Nehisi Coates, James Baldwin and many more) are highlighted in the Smithsonian’s traveling exhibit Men of Change: Power. Triumph. Truth. The Washington State History Museum in Tacoma is the show’s only stop in the Northwest. Alongside the wealth of historical information are works by 25 contemporary artists — paintings, collages, and multimedia pieces that honor the contributions African American men have made in activism, literature, music, athletics, comedy and elsewhere. Commissioned by the Smithsonian, the artworks range from literal depictions of specific men to abstract interpretations like Black Excellence, a larger than life painting (by Los Angeles-based pop artist Knowledge Bennett) of a black abyss that shines and sparkles. –A.P.F. 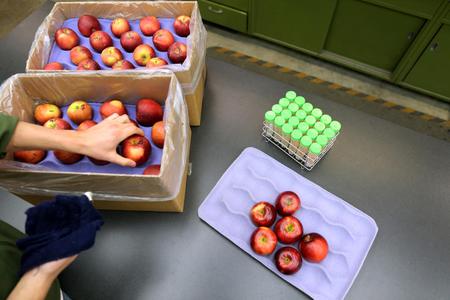