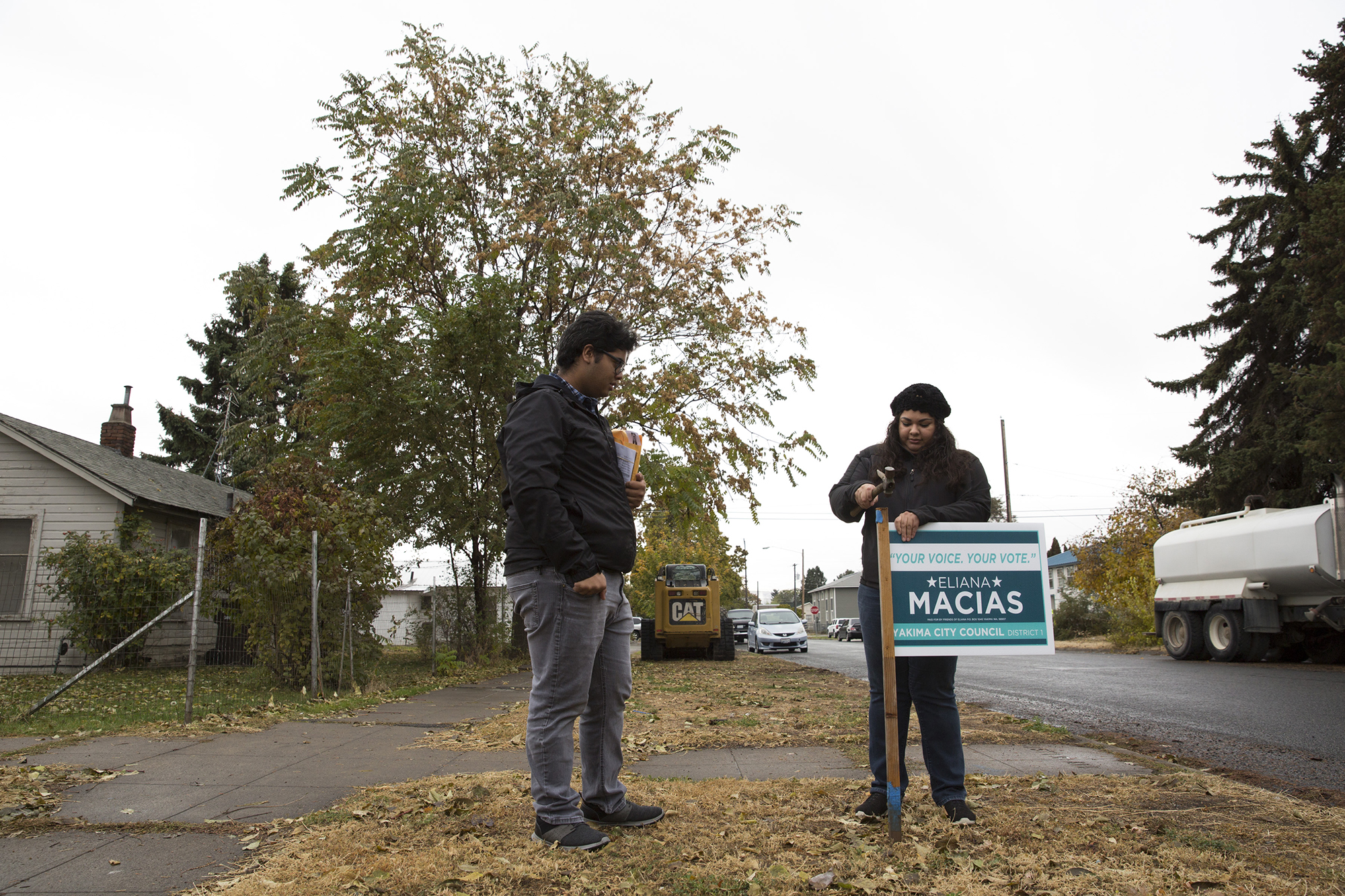 Eliana Macias, 28, who won a seat on the Yakima City Council, places a campaign sign as she and her brother, University of Washington freshman Alberto Macias, 18, canvassed Oct. 20, 2019, before her election. (Jason Redmond for Crosscut)

For the candidates running for Seattle City Council last November, election night was a party, if a nerve-wracking one. As supporters filled bars across the city, and with the 8 p.m. ballot deadline nearing, the shifting balance of power in the city was almost certainly already decided, but yet to be known. Would corporatocracy and establishment Democrats swing the center of power in City Hall to the right, or would progressives finally establish a solid front?

Meanwhile, across the Cascades in Yakima, Eliana Macias was uncertain of her fate. The first-time Yakima City Council candidate, running for the District 1 seat, was not celebrating months of hard work knocking on doors. She was at a city council meeting, in a fight for the future of a city that she may or may not have a hand in leading.

At the meeting, Macias sat in the council chamber with Dulce Gutiérrez, then the Yakima City Council District 1 representative and assistant mayor. The topic of discussion was the possibility of reviving a strong mayor-council system that some feared would roll back hard-earned progress on voting rights for Yakima’s Latinx community. Under the existing system, both the mayor and assistant mayor function as any other city council member; they serve as the face of city governance, making public appearances and executing some additional responsibilities, but have no more powers than any other council member. A city manager, appointed by the council, oversees the administration.

The possible change concerned Gutiérrez and Macias, who worried that an at-large mayoral election system would dilute the vote and diminish representation of Yakima’s Latinx community. Until 2015, Yakima voters elected officials via a hybrid system, which cast city council votes by districts in primary elections, but shifted to a citywide vote for the general election. A federal court ruled in 2014 that the system violated the Voting Rights Act. U.S. District Judge Thomas O. Rice found that the citywide, or at-large, system privileged the city’s white majority and “suffocated” the electoral preferences of the Latinx community. In the 37-year history of the at-large system, not one Latinx resident had been elected to public office.

As a result of the successful lawsuit, brought by the American Civil Liberties Union of Washington, the hybrid system was replaced with a district election system. Where at-large elections suppressed the Latinx vote, district elections created opportunity for majority Latinx districts — which predominate the city’s east side — to have greater influence in city elections. Of the 13 people elected to the city council since the suit, 10 have been women and five have come from underrepresented racial or ethnic groups, including three Latinx councilmembers — Carmen Mendez, Dulce Gutiérrez and former Mayor Avina Gutiérrez (no relation to Dulce; Avina Gutiérrez stepped down from city government in 2016).

But when both Mendez and Dulce Gutiérrez decided last year not to run for reelection, many wondered if anyone from the Latinx community would be elected to the council.

Back in the council chamber, Macias, the only Latinx representative in the 2019 general election, learned the results of her District 1 election from someone standing next to her at the council meeting. It was not the result she had been hoping for: She was nearly 20 points behind her opponent, the Republican Kenton Gartrell.

But as the ballot count continued into the week, Macias eventually, remarkably, pulled ahead.  She won by 3.68 percentage points, just 27 votes. Turnout appeared to make all of the difference. In 2015, 549 total votes were cast in District 1, compared with 734 in 2019.

Macias will be sworn in on Jan. 7.

To understand the significance of what is happening in Yakima, we have to understand the city’s changing demographics. Rural areas have traditionally been political strongholds for conservative and right-wing politics. But small demographic shifts, which may not have much impact in highly populated urban areas, can spark major progressive political movements in rural locations.

These transformative demographic shifts are changing the composition of political leadership and raising questions about the future of progressivism at the local level in Central and Eastern Washington.

The Yakima Valley, commonly referred to as the nation’s fruit basket, is home to the Yakama Nation and has always been an agricultural hub. Farmers in this highly fertile region grow hops, apples, pears and cherries.

Yakima’s population is approximately 94,000. In the 1980s the demographics of the region began to change, as many Mexicans immigrated to Yakima to work in the agricultural industry. Now the Latinx community, doubling its size in just one generation, comprises nearly half the population. It was these shifting demographics that revealed inequities in the Yakima election system.

Demographic shifts across the nation are just beginning to cause change in the political arena, but that change in many places is hard won, requiring strenuous legal battles over the voting rights of disenfranchised communities. According to the Brennan Center for Justice, over 30 voting rights cases were being litigated in at least 15 states across the United States as of July 2019. In the 2015 Yakima voting rights suit, the city spent nearly $1 million appealing the court decision.

Dulce Gutiérrez was 26 when she was elected to the Yakima City Council, becoming one of the first Latinx representatives and the second youngest person to hold the office. She is representative of a changing tide of people elected across the United States. In Yakima and nearly 100 other metropolitan areas, nonwhite residents comprise the majority of the young population, while non-Hispanic white residents comprise the majority of the older population, according to the New York Times. As the demographics of the electorate shift, so does who is elected to public office. But at the start of 2019, many Yakima residents were unsure of what to expect. When Gutiérrez took office in 2016, Yakima overwhelmingly voted for Trump.

Gutiérrez won her district with over 72% of the vote, making her a shoo-in for re-election. But Gutiérrez’s time in office had not been easy. As the most progressive council member, she was the primary target of conservative critics. She says that her image, likeness and words were used in what she called racist and sexist political propaganda. She has had to fight tooth and nail for small changes, and eventually came to believe that small progress in Yakima was better than no progress at all.

After months of agonizing over the decision, Gutiérrez decided to attend law school instead of running for re-election. Knowing the importance of continuity, she started looking for a candidate directly from the community, someone she could mentor to run for District 1. Asked why it was important for her to personally mentor someone to run, Gutiérrez said, “We sometimes come into this without the institutional knowledge that many white electeds have. It took me a year and a half to get through my learning curve to understand the rhythm of things and how to prepare and plan to get community to participate. I wanted to impart what I learned to someone else so that they can start ahead of where I started.”

Gutiérrez tapped Macias, a Latinx healthcare worker, a single-mother and a child of farmworkers who grew up in District 1. The story of most residents in the district is also Macias’. She decided to run because of her experience as a single mother living in Yakima. She claims to have no special interest. She is coming to politics, she says, as just a “concerned citizen.” Public safety, lighting, roads and safe walking routes to school — these were the campaign priorities that vaulted her to a dramatic victory.

All new electeds have a steep learning curve, but Macias has the added burden of being the sole Latinx voice on the council. Without her, such issues as immigration and dealing with the threat of U.S. Immigration Customs and Enforcement, “welcoming city” resolutions, community pools and street-lamp additions on the majority Latinx east side may be overlooked, if not considered at all. Says Macias, “I want other mothers in our area to know that it is a priority of mine for us to feel safe and included in decision making. Having someone from the Latinx community represent us is just a start.”

Macias knows that for her the stakes are higher and the expectations greater — as they often are for people of color, and especially for women of color, on the forefront of progressive change. To be the first to do anything is both a privilege and a burden. Our successes are often debased and our mistakes overstated in ways that our white peers, especially our white male peers, do not face. What Macias does or does not do will reflect upon the entire Latinx community and future Latinx candidates, even those who do not live in her district. It’s  a responsibility she takes on knowing that representation is a small, though important, drop in the bucket of change.

Progressive change is not easy and often takes years, lots of community organizing and money, and lengthy legal battles to make it stick. As the 2015 voting rights suit revealed, there is a high risk of disenfranchisement of Latinx voters if a mayor is chosen by an at-large election. And the line of support seems clearly drawn between conservatives who opposed the outcome of the voting rights suit and progressives who supported it. Although the strong-mayor proposal was removed from the February ballot for concerns of constitutionality, its proponents are already gearing up for future attempts at seeing it through.

Macias pulled through this election with an incredible and historic win, but the fact remains that she’s the sole Latinx representative on the council of a city that is nearly 50% Latinx. She is already facing pushback from Yakima residents, primarily residents living outside of her district, upset about the role she played in having the strong-mayor proposal pulled. Nonetheless, with the support and guidance of her mentor, former Councilmember Gutiérrez, she is hitting the ground running and promises to improve the city “neighborhood by neighborhood, block by block.”


Correction: This story originally named Kevin Gartrell as the opponent of Eliana Macias in the 2019 general election. His name is Kenton Gartrell. We regret the error.