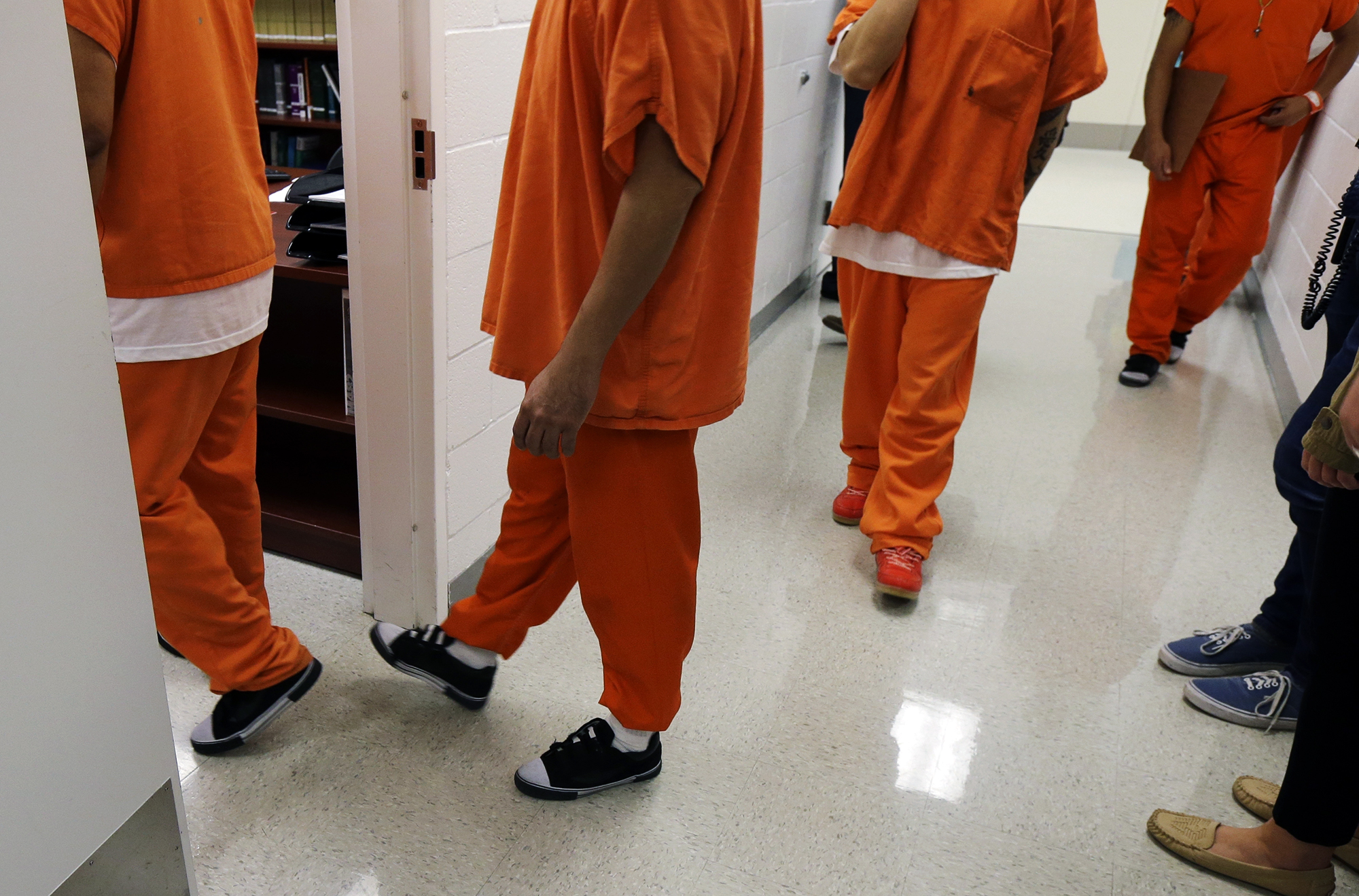 In this photo taken June 21, 2017, detainees walk in a hallway at the Northwest Detention Center in Tacoma during a media tour. The federal facility, operated under contract by The GEO Group, houses people detained on immigration and other violations.(Ted S. Warren/AP)

On a recent Saturday, immigration advocates packed Washington Hall, shared tamales and discussed the various ways they planned to put an end to immgiration detention in Washington state.

They had already managed to stop deportation flights in King County, the activists boasted.

After giving a brief historical overview of the burgeoning private prison industry in the United States (the first private prison opened in the 1980s), and the costs and abuses associated with the facilities, the activists revealed a bill a number of groups have been working on with Washington state legislators. The bill's intention: Ban all private detention facilities. The Latino Civic Alliance, Washington State Labor Council, American Civil Liberties Union of Washington, Northwest Immigrant Rights Project, La Resistencia, among others, have supported the bill.

Sponsored by state Sen. Rebecca Saldaña, D-Seattle, and in the House, Lillian Ortiz-Self, D-Mukilteo, the bill aims to prevent private companies that contract with local, state and federal agencies, such as U.S. Immigration and Customs Enforcement, or ICE, from operating in Washington state.

Under the bill, Washington state’s one private detention facility, the Northwest ICE Processing Center in Tacoma, would continue to detain people only for the duration of its contract, which expires in 2025. The bill could prevent other private facilities — whether criminal or civil — from opening.

Leading presidential candidates, such as Sens. Bernie Sanders and Elizabeth Warren, have already identified the private prison industry as a primary target, vowing to do away with private jails.

Grisel Ruiz, supervising attorney at the Immigrant Legal Resource Center, one of the groups behind the push to ban private prisons, said “this really is a national movement.”

“Our North Star is to see some change at the federal level,” Ruiz said.

Ortiz-Self said: “We should not be profiting off our most vulnerable communities. Locking people up should not be a moneymaking venture.”

Saldaña pointed out many of those held are not violent individuals, and many end up in worse condition after they come out.

If signed into law, Washington state would join a handful of other states that have already tackled this issue.  Last summer, Illinois Gov. J.B. Pritzker signed legislation that bars private companies from contracting with local communities to detain immigrants. The new law expands on the state's already existing 1990 private prison ban.

The goal of the Illinois legislation was to prevent the construction of a 1,300-bed facility in Dwight, a small town roughly 80 miles southwest of Chicago. Immigration Centers of America, or ICA, the private prison company that attempted to open the facility, has also been defeated in two other locations: in Michigan, where the governor vetoed its proposal, and in Wisconsin, where the town of New Richmond said the proposal for a 500-bed facility didn’t fit with the city’s long-term plan.

Months later, in October, California Gov. Gavin Newsom signed legislation that bans for-profit lockups in that state — both criminal and civil. Specifically, the new law bars the Department of Corrections and Rehabilitation in the state from entering into or renewing a contract with a private company after Jan. 1. Privately run facilities will be banned altogether by 2028.

GEO Group, one of the largest private prison companies, runs dozens of facilities across the country, including the Northwest ICE Processing Center. It has challenged California’s law in court. In December, the Florida-based company sued California Gov. Gavin Newsom and Attorney General Xavier Becerra in U.S. District Court in San Diego. The lawsuit argues that the new California ban aims to “undermine and eliminate the congressionally funded and approved enforcement of federal criminal and immigration law.”

It is a “transparent attempt by the state to shut down the federal government’s detention efforts within California’s borders” and “a direct assault on the supremacy of federal law,” the lawsuit says.  The suit came days after ICE rushed to sign new contracts for four private immigrant detention centers ahead of the ban.

When asked whether the California lawsuit made Washington legislators nervous, Ortiz-Self said she was hopeful California would win in the end.

In addition, Ortiz-Self said legislators have asked both the Washington state Attorney General’s Office and Gov. Jay Inslee’s staff to review the bill.

Mike Faulk, deputy communications director for Inslee, said “the governor supports the bill in principle” but is awaiting the final version.

“Staff and agency recommendations have focused on preventing unintended consequences for public safety, like ensuring there are contingency options for state inmates if public facilities are damaged or destroyed in a natural disaster,” Faulk said.

GEO Group, for its part, argued in a statement that the bill, if passed, “would likely do more harm than good for the individuals housed at the Northwest ICE Processing Center.”

“The services we provide in our facilities today are in no way different than the high-quality, professional services that we provided for eight years under President Obama’s administration — and in the 20 years since we began operating in Tacoma,” the statement continued.

A state ban, the statement said, would only lead inmates currently at the Northwest ICE Processing Center to be transferred out of state, “isolating them from family and friends and making visits more difficult.”

Asked about the bill, Tanya Roman, a spokesperson for ICE in the Pacific Northwest, referred all questions to GEO Group.

Nicole D. Porter, director of advocacy at the Sentencing Project, a Washington, D.C., advocacy and research center that focuses on incarceration, said the California lawsuit could settle the question of whether “states have legal authority to prevent federal contracts.”

Legislators, Porter said, should also focus on decarceration in general and reducing lengths of stay — whether private or public.

Ortiz-Self said the Legislature is also considering smaller bills, including one that would settle the question of whether the Tacoma detention center is considered an “essential public facility.”

In 2018, GEO Group sued Tacoma after the city prevented the expansion of the Northwest ICE Processing Center. The company argued that under state law the detention center qualifies as an essential public facility and cannot be barred from expanding. A bill in the Legislature would clarify that private detention facilities are not essential public facilities under the state's Growth Management Act.

With regard to the bill that would ban private prisons, Ortiz-Self said:  “It’s more than time for us to be taking a stand on this.”

“I don’t think it’s consistent with what Washington stands for,” she said. 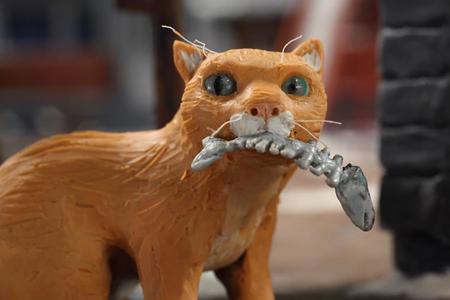 About two-thirds of respondents in the latest Crosscut/Elway Poll support restricting access to firearm magazines capable of holding dozens of rounds.