A bill under consideration in Olympia would also require federal immigration agents to check in before entering a courthouse. 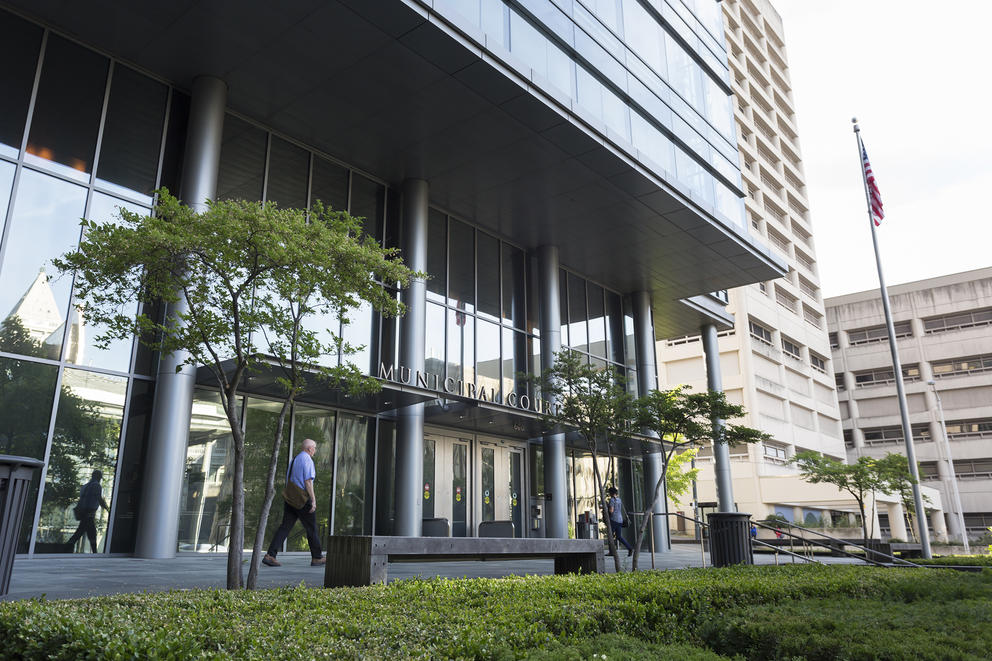 Facade of the Municipal Court of Seattle on June 12, 2019. (Paul Christian Gordon for Crosscut)

In the latest push to stop the arrests of undocumented immigrants at courthouses, the Washington state Legislature is considering a bill that would prohibit federal immigration agents without a warrant from making arrests within one mile of a courthouse.

If signed, the legislation would also require judicial warrants to be reviewed by a court before being used. And federal immigration agents would have to check in with local court staff before entering a courthouse. A website monitored by the state Administrative Office of the Courts would track all arrests made at courthouses.

Finally, the bill would prohibit court staff, including prosecutors, from sharing information with federal immigration officials. A recent report from the University of Washington Center for Human Rights revealed that county prosecutors have been sharing information with U.S. Immigration and Customs Enforcement (ICE) and Border Patrol agents to facilitate the arrests of undocumented immigrants at state and local courthouses.

The outcry over immigrants being arrested at courthouses by plainclothes ICE and Border Patrol officials has been persistent. Washington state Attorney General Bob Ferguson sued the federal government last month in an attempt to stop such arrests, and the state Supreme Court is looking at rules that would bar the apprehensions.

At a hearing on the bill last week before the House Civil Rights and Judiciary Committee, legislators heard testimony in Spanish from a man named Carlos. He told lawmakers he and his wife recently visited the courthouse in Ephrata, Grant County, to renew his car's license plates. While his wife waited in the vehicle, Carlos stood in line inside the courthouse and noticed a man staring at him. As Carlos exited the courthouse, another man with a gun approached him, introduced himself as a federal immigration official and, in Spanish, said, “Soy la migra" (or “I am ICE/Border Patrol”). Carlos was promptly arrested.

“I had never seen an immigration official, and I didn’t understand what was happening,” Carlos said at the hearing. Carlos handed over his license and was eventually cleared, but the experience left him so shaken that he admitted he was too frightened to show up to court to pay for a traffic violation, sending his 15-year-old son instead.

“This is no way to live,” Carlos testified.

Sen. Lisa Wellman, D-Mercer Island, one of the main sponsors of the bill, said legislators and advocates are still doing the necessary outreach to various constituents, such as court staff and law enforcement.

She said she has heard what she referred to as egregious stories about courthouse arrests that only dissuade people from seeking justice.

“I’m appalled,” Wellman said, “that could happen in our country.”

Rep. My-Linh Thai, another sponsor, said she hoped the bill would pass in a bipartisan manner because equal access to courts is something both Democrats and Republicans should be able to agree upon.

The bill, the Bellevue Democrat said, isn’t about hampering the work of law enforcement, but about ensuring the public can use courts to pay fines, serve as witnesses, seek protection orders and pursue other matters related to the justice system, without the fear of unexpected encounters with law enforcement.

“As a refugee I believe in our judiciary system,” she added.

Wendy Ferrell, a communications officer with the Administrative Office of the Courts, the operational arm of the state's judicial branch, said the agency, as well state Chief Justice Debra Stephens and the Board for Judicial Administration, “support both the spirit and intent of this legislation.”

“Our hope is that with a few changes that have been discussed with proponents, this legislation will move forward successfully, as we have a steadfast commitment to ensure that all residents of Washington have access to justice,” Ferrell said. She noted that former Chief Justice Mary Fairhurst had written to federal immigration enforcement authorities in March 2017 and again in April 2019, asking that courthouses be deemed sensitive locations.

Enoka Herat, an attorney with the American Civil Liberties Union of Washington, said the state would not be the first to protect its court system. In November, the Oregon Supreme Court barred warrantless arrests at courthouses. California, New York and New Jersey have also sought similar protections for immigrants. In Massachusetts, a federal judge barred courthouse arrests while a lawsuit makes its way through the court system.

Some of the new rules, however, have already faced criticism from those who believe such arrests are necessary. In a letter sent soon after the Oregon Supreme Court barred courthouse arrests, U.S. Attorney General William Barr urged Oregon Chief Justice Martha L. Walters and Washington state's Fairhurst to not stand in the way of courthouse arrests. “Cooperation among local, state, and federal law enforcement officers is in the public interest and promotes safe communities,” Barr said.

When asked about the arrests, a Border Patrol spokesperson said it does not comment on pending legislation.

While legislators debate the merits of the bill, immigration advocates say they continue to receive a steady stream of reports from those who say they’ve been arrested at courthouses, especially in Eastern Washington.

by / January 10
Inside Crosscut