About two-thirds of those surveyed in a new poll favored restrictions on firearm magazines capable of holding dozens of rounds. 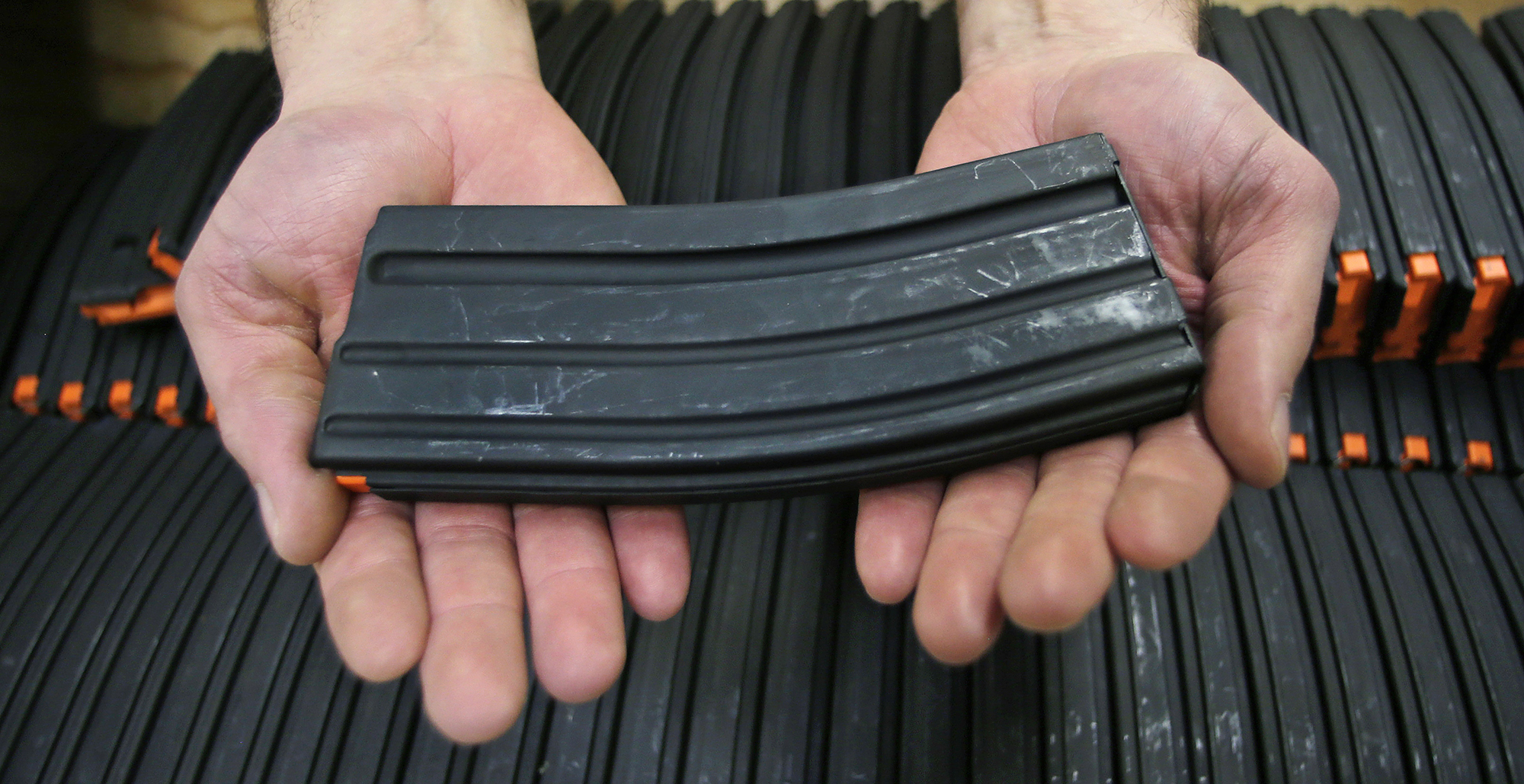 Jonathan Scalise, owner of Ammunition Storage Components, holds a 30-round magazine that his company manufactures for the AR-15 assault weapon. In the wake of mass shootings, banning high-capacity magazines has been part of the debate over gun control legislation. (Charles Krupa/AP)

Yet at the state Legislature, which began a new, 60-day session in Olympia this week, passing such a measure doesn’t appear to be at the top of lawmakers’ agenda when it comes to gun legislation this year.

Instead, leading Democratic lawmakers talk emphatically about how they need to centralize the state’s system of background checks, a step they say will ensure the checks are more effective at keeping firearms away from people with disqualifying convictions or arrests.

Banning high-capacity magazines, while supported by many Democratic lawmakers, is a far less certain prospect.

“It’s too early for me to say whether that has a likely chance or not,” said state Senate Majority Leader Andy Billig, D-Spokane, who said members of his caucus still need to have more discussions about the issue.

Even Gov. Jay Inslee, who is championing the legislation along with state Attorney General Bob Ferguson, speaks of banning high-capacity magazines as more of an ambitious goal than a likelihood.

The Democratic governor said he can't promise the high-capacity magazine ban will pass this year, but even if it doesn't, "we’re getting closer to that goal.”

"It’s called setting an ambition … to let people know it is the right thing to do," Inslee said Friday.

At the same time, Inslee said public sentiment has been evolving rapidly on gun-control measures. He noted that two recent gun-safety initiatives in Washington — one expanding background checks and another enacting safe storage rules and raising the legal age to purchase semi-automatic rifles — passed with 59% of the vote.

“These aren’t ideological and partisan driven issues we are talking about,” said Tallman Trask, policy and advocacy director of the Washington Alliance for Gun Responsibility. “It is about public safety and keeping people safe from gun violence across our state.”

The alliance has been a key force behind some of the recent statewide ballot measures that have tightened gun laws. 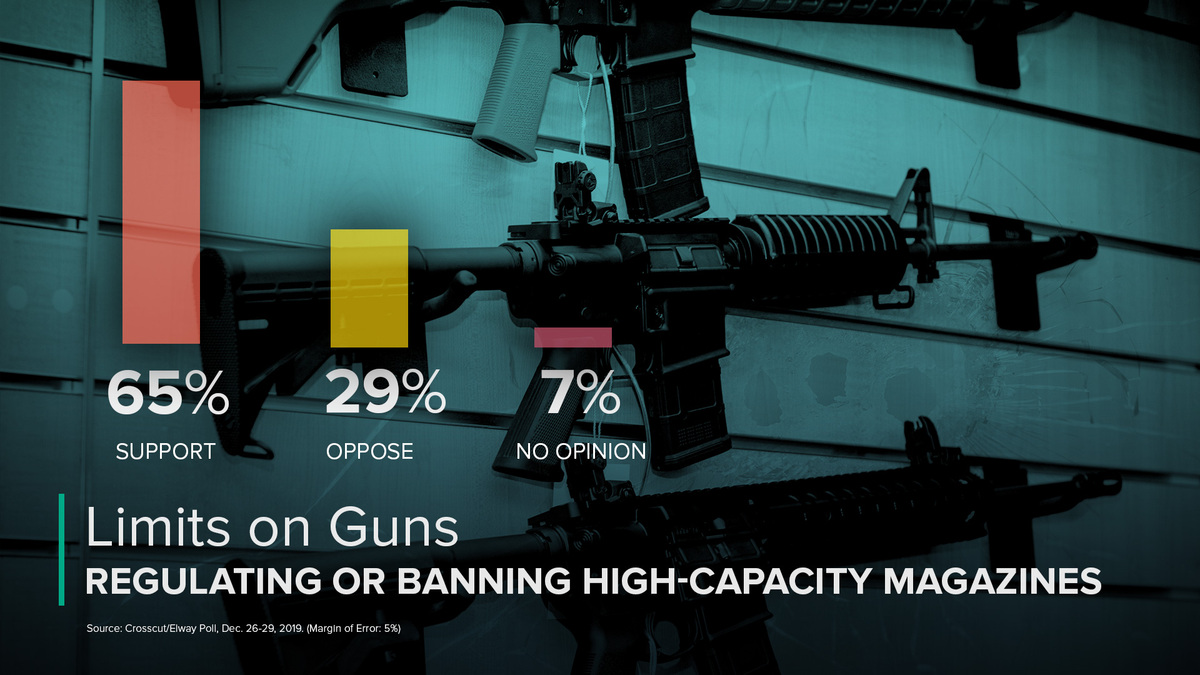 Ferguson, the Democratic attorney general, said restricting the size of gun magazines will save lives by forcing shooters to reload, giving victims a moment to escape and police an opening to intervene. He has urged legislators to pass such a measure for the past three years.

In a recent news release, Ferguson’s office noted that a shooter with a 100-round magazine was able to kill or injure 36 people in Dayton, Ohio, in August over the course of 32 seconds. High-capacity magazines were also used in two deadly shootings in Washington state in the past four years, at a mall in Burlington and and at a house party in Mukilteo, Ferguson’s office said.

Still, gun-rights groups question whether mandating smaller magazines will really make that much of a difference.

“If somebody is determined to hurt a lot of people and they’re skilled with a firearm, they can do that,” said Dave Workman, a spokesman for the Bellevue-based Citizens Committee for the Right to Keep and Bear Arms. Workman said a high-capacity magazine ban “presents a false sense of security,” because experienced shooters can reload quickly and resume shooting anyway.

The biggest issue to Workman, however, is that such restrictions, in his view, infringe on people’s constitutional right to bear arms.

“You will find the Washington state constitution is pretty unequivocal” when it comes to gun rights, said House Minority Leader J.T. Wilcox, R-Yelm, during a legislative preview event last week.

While Democrats control both chambers of Washington’s Legislature, not all Democratic lawmakers are slam-dunk votes for a high-capacity magazine ban.

State Sen. Steve Conway, D-Tacoma, said this week that he is “open” to the idea, but needs to “have a few more conversations” with his colleagues before deciding he’d vote for the measure.

The Alliance for Gun Responsibility's Trask said he expects the state Senate to be a more difficult place to pass the high-capacity magazine ban than the state House.

A centralized system run by the Washington State Patrol would help ensure that checks are more thorough and don’t miss arrest reports or juvenile convictions from different jurisdictions, the analysis found.

Asked last week about the high-capacity magazine ban, House Speaker Laurie Jinkins shifted to talking about improving the background-check system instead. She said shoring up the state's background checks is something lawmakers “have to do.”

“A lot of what we do related to firearms is making sure our current laws work,” said Jinkins, D-Tacoma.

Jinkins said this week that, while she personally would like to see a high-capacity magazine ban advance, she can’t force her colleagues to vote for it.