Leaders in Olympia acknowledge their proposed solutions are only temporary, however. 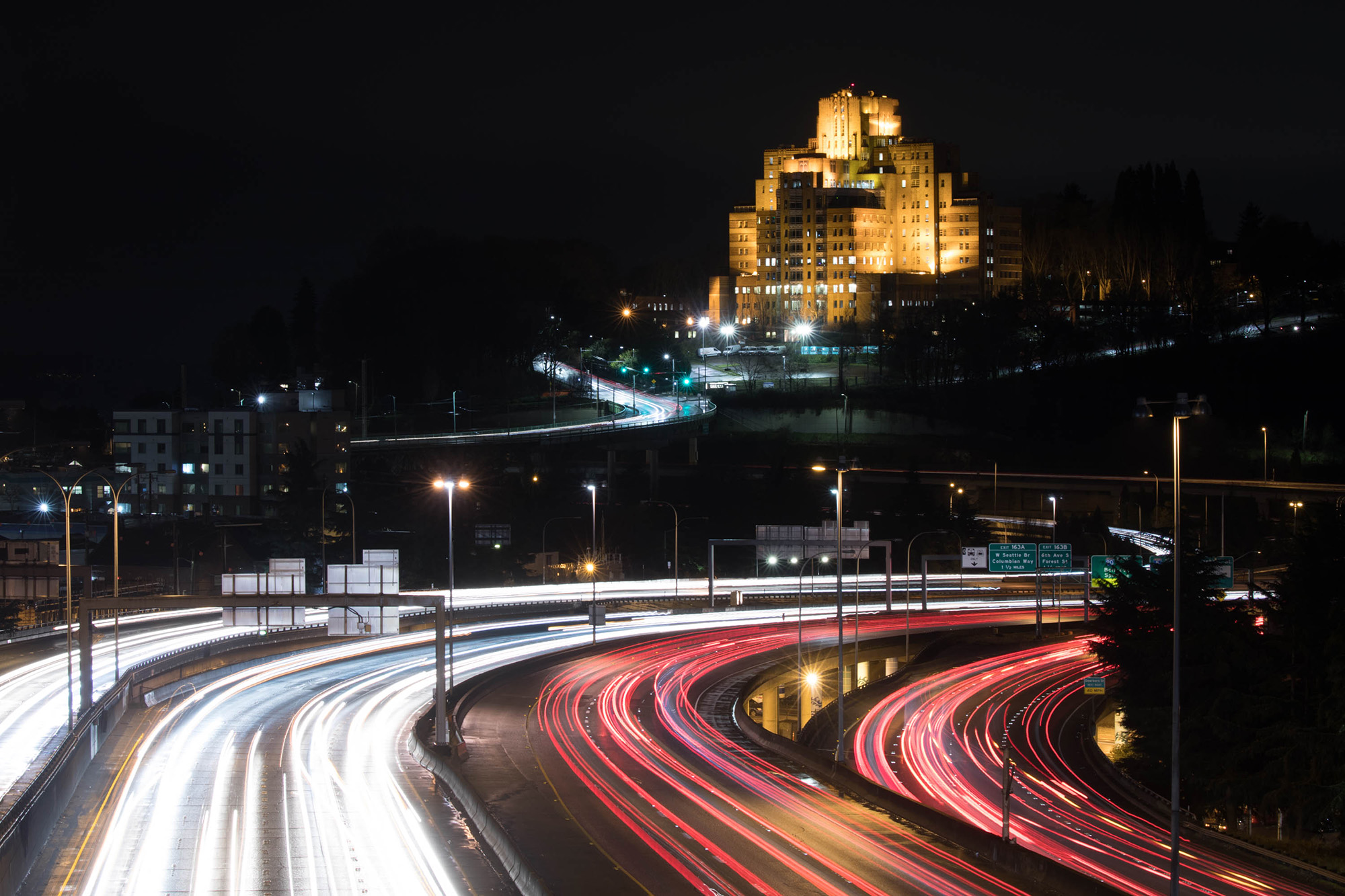 An evening view of the Pacific Tower on Beacon Hill in Seattle, with traffic on Interstate 5 traveling the highway. Following the passage of Initiative 976 and facing a projected hole of $453 million in the state transportation budget, Gov. Jay Inslee placed a hold on dozens of highway projects across the state last year. Washington legislators are keen to bring those projects back online with their supplemental transportation budgets. (Matt M. McKnight/Crosscut)

State lawmakers want to resume work on dozens of highway projects that Gov. Jay Inslee placed on hold after the passage of Initiative 976 in November.

Approval of the car-tab cutting measure has legislators facing a projected hole of $453 million in the state transportation budget — a shortfall that's expected to grow to $684 million during the state’s next two-year budget cycle.

In anticipation of those revenue losses, Inslee had directed the delay of more than 70 projects that had yet to begin construction.

This week, however, Democratic leaders in the state House and Senate released supplemental transportation budgets that would restart all or nearly all of the projects the governor halted.

“This is a path to get through this biennium,” said state Rep. Jake Fey, a Tacoma Democrat and chair of the House Transportation Committee, during a press conference for the House budget release Monday. “We have bigger challenges coming forward in the next biennium.”

I-976, sponsored by serial initiative promoter Tim Eyman, won the support of 53% of Washington voters in November. It promised to reduce annual vehicle registration fees to a flat $30 — not just by slashing state-level car-tab fees, but also those collected by cities and other local entities, such as Sound Transit.

After the initiative passed, legislative leaders gloomily projected that they would need to further postpone projects or cut other transportation programs to make their budget balance.

But several things have happened in recent months: a judge placed the initiative on hold temporarily, and state officials say many transportation projects are predicted to come in under budget.

Both the House and Senate transportation budgets bank on at least $300 million in savings from lower-than-expected spending on transportation projects.

Still, the strategy of pressing ahead with projects now carries some risk down the road. For instance, if some state transportation projects don't come in under budget after all, lawmakers will have a greater shortfall to deal with next year.

What’s more, if I-976 is ultimately upheld by the courts, state officials could still be on the hook for refunding car-tab money they collected while the initiative was caught up in a legal challenge.

With that uncertainty hanging over them, House and Senate transportation leaders said they were looking at options for passing a new transportation tax package next year to help solve their budget problem in the long-term.

A transportation package that raises new revenue — through a gas tax increase, for example — would also be necessary to pay for projects such as constructing a new Columbia River bridge over Interstate 5, as well as continuing to replace culverts that block fish passage, said Fey, the House Transportation Committee chair.

If new taxes aren’t approved next year, Fey wrote in a text message Tuesday, “There will be more cuts.”

Under the House plan, certain rail projects would still be delayed until the state’s next two-year budget cycle begins in July 2021. So would some funding for regional mobility grants and vanpools.

But progress on the highway projects paused by Inslee late last year would resume as soon as the governor signs the budget into law, Fey said.

The state Senate took a similar approach with the transportation budget it released Tuesday, proposing to restart all currently stalled projects.

House and Senate leaders also propose dealing with the shortfall posed by I-976 by making certain fund transfers, such as shifting which transportation account pays for costs associated with the Washington State Patrol.

“We had to get creative to make sure the state’s priorities were met,” said Sen. Steve Hobbs, the chair of the Senate Transportation Committee, in a news release.

“Moving money around like this is something that can only be done once,” said Hobbs, D-Lake Stevens. “We are looking at a significant budget shortfall in January without new revenue.”

Sen. Curtis King, the ranking Republican on the Senate Transportation Committee, said Republican and Democratic committee members worked together to find money that wasn’t being used in other projects and could be reappropriated.

“The things that we did are not things you can do every biennium or every year,” said King, R-Yakima. “But they were reasonable and they were fair with very little risk.”

At the same time, King added,  “I’m telling you right now, we made this work because we did things we wouldn’t normally do.”

For now, the future of I-976 remains uncertain. Earlier this month, a King County judge dismissed multiple arguments from opponents of the initiative as to why they think I-976 is unconstitutional. One of the arguments that was thrown out was an allegation that the initiative’s ballot title deceived voters.

However, King County Judge Marshall Ferguson has yet to rule on two legal arguments that still could end up invalidating all or part of the initiative. Those include that I-976 impairs existing contracts by slashing revenue already being used to finance construction projects, and that the initiative unlawfully requires the state to calculate car-tab fees based on Kelley Blue Book values.

Seattle, King County and other plaintiffs seeking to overturn I-976 have argued that requiring the state to use Kelley Blue Book numbers grants the private company a special contractual privilege, thereby violating the state constitution.

State Sen. Marko Liias, D-Lynnwood, said he ultimately expects the case to be decided by the state Supreme Court, a process that could take many more months.

Anyone who says they know how the case will turn out at this point is “just prognosticating,” Liias said.

Multiple Republican lawmakers have proposed to enact the car-tab cuts promised under I-976 through legislation, even while the court case drags on — but those measures have yet to advance in the Democrat-controlled Legislature.

This story has been updated to clarify the nature of cost underruns on state transportation projects. 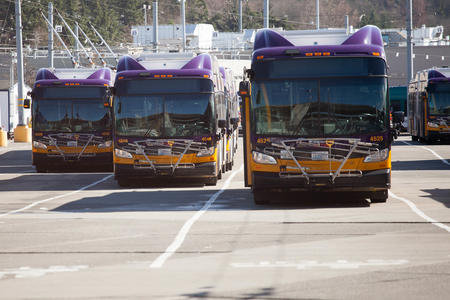 The plaintiffs suing to overturn the initiative “have sufficiently shown they are likely to prevail,” said the King County Superior Court judge. 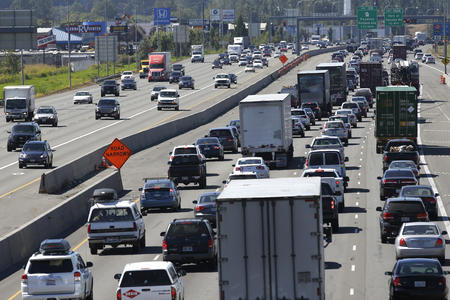 by / December 6
Article continues below

The plaintiffs suing to overturn the initiative “have sufficiently shown they are likely to prevail,” said the King County Superior Court judge.