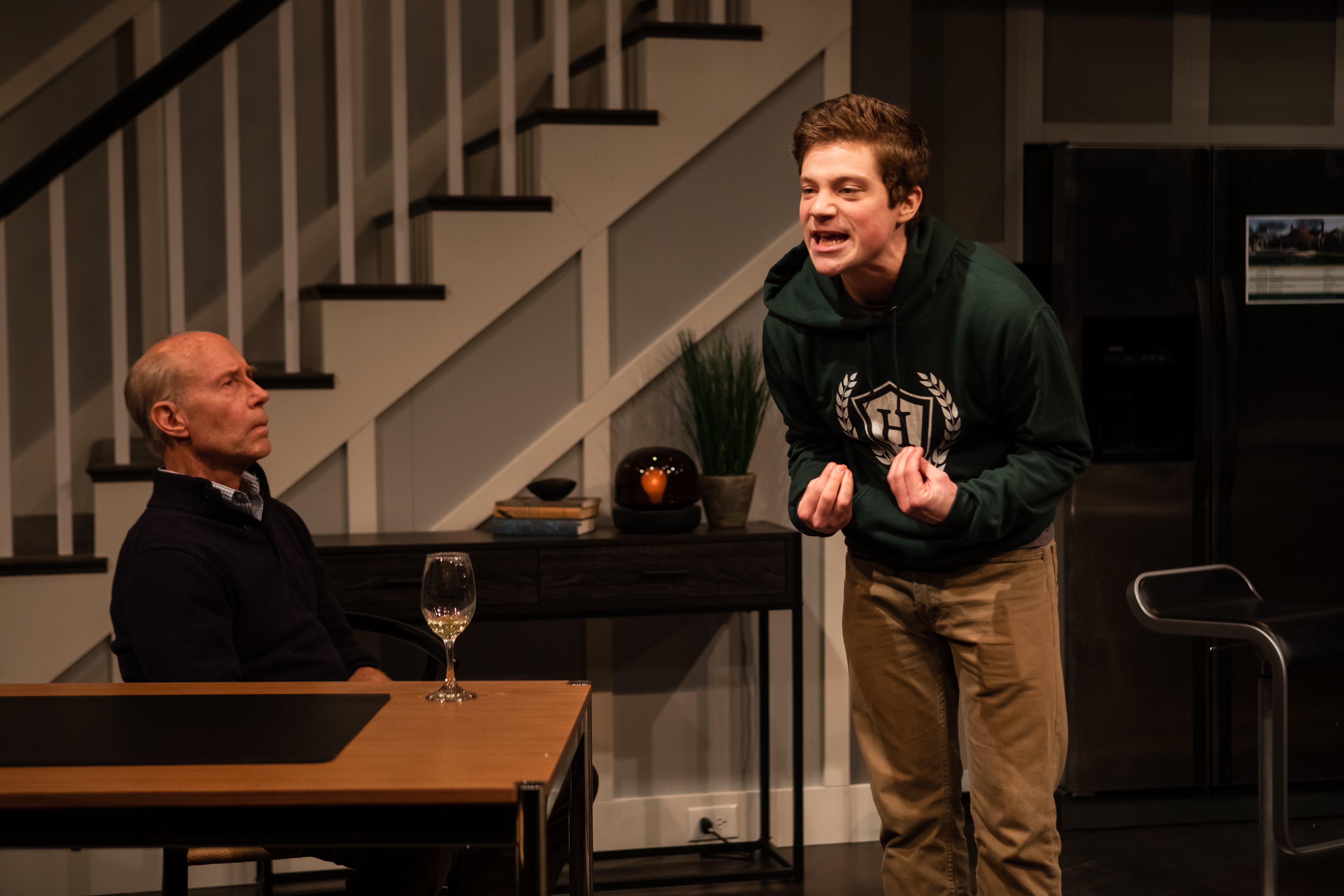 You’re an admissions counselor at an exclusive New England prep school. You’re a white liberal woman, fiercely determined to raise the percentage of Black and Brown students in attendance at your predominately white institution. Educational diversity is your earnest priority.

So when your son fails to get into his first-choice college (Yale University), and his mixed-race best friend with similarly good grades and scores and extracurriculars gets an acceptance letter from the same prestigious school, how do you react? What happens to your belief in leveling the playing field?

These questions are upfront and personal in Joshua Harmon’s shrewd, unsettling, take-no-prisoners play, Admissions, now running at Seattle Public Theater. The knotty comedy with electric undercurrents was written by a white writer, featuring only white characters, about a provocative subject: where do people with racial and economic privilege draw the lines between idealism and self-interest, liberal guilt and hypocrisy, and doing the right thing?

The answers are not pat, nor predictable. No one in this story is the villain, or the hero. With crisp direction by Seattle Public Theater’s new artistic director Annie Lareau, as well as a strong cast led by Anne Allgood and Kevin McKeon, the play incites the kind of difficult theatrical conversation that can entertain an audience of (predominately white, politically liberal) Seattle theatergoers — while also deliberately making them uncomfortable.

The opening night audience reacted with an array of laughter, gasps and occasional bursts of applause. Viewers may have been uncertain what to feel from moment to moment about the dilemmas of Sherri Rosen-Mason (Allgood), her husband, Bill (McKeon), who heads the same prep school where she works, and their bright teenage son Charlie (Benjamin McCormack). The roller coaster of reactions demonstrated Harmon’s ability to honor a complexity of higher education issues that many parents (and society at large) are wrestling with more than ever.

Are Ivy League rejections so-called “white people problems”? Maybe, but the play’s premise is part of a nexus of issues connected to larger concerns about equity, race, status and what it means to be “educated” in this society.

Harmon (whose earlier, rapier-sharp play Bad Jews was staged at Seattle Public Theater in 2015) wrote Admissions a couple of years before the 2019 college admissions scandal grabbed national headlines, and implicated Hollywood actors Lori Loughlin and Felicity Huffman. In that case, 33 wealthy parents of college applicants were accused of having paid more than $25 million to Key Worldwide Foundation and The Edge College & Career Network to get their (academically underachieving) kids into top universities by way of rigged entrance exams and bogus athletic records. College officials at numerous high-status schools were also implicated in what FBI investigators labeled Operation Varsity Blues.

Admissions is not about such a pay-for-play school ruse. But once parents Sherri and Bill realize their son has lost out on Yale, they go into crisis mode. Sherri is convinced her kid won’t get anywhere in life, won’t meet the right people, or score the right jobs if he doesn’t attend an elite college. Bill concurs, so they strategize about who they can call, what strings they can pull, to get Charlie on the fast track to the Ivy League.

But the message they send to Charlie is muddled. And in a long, feverish monologue, their son articulates his own angst and sense of injury at being excluded from opportunities because, in his view, he’s “a straight white guy” being discriminated against in an age of affirmative action.

It’s not just the disappointment he feels over his mixed-race friend making it into Yale when he, Charlie, “deserves” it just as much. He is also angry that the coveted assignment of editor-in-chief of his prep school newspaper went to a female student he considers less qualified and less worthy than himself. She got the job, he argues, solely on the basis of her gender. “I don’t have any special boxes to check!” Charlie rages.

This torrential tirade may smack of self-pity, but it’s not disingenuous. In a narrow sense, Charlie is right: Without concern for diversity, some perks and positions he’s worked hard for but is missing out on might have been granted to him. But his father answers his son’s cri de coeur with an angrier rant of his own.

“What a spoiled brat!” he counters, reminding Charlie of his considerable privilege from birth. Life isn’t fair, Bill tells him in a voice dripping with vitriol, “but it’s not white boys in private schools who have it so bad.”

Charlie takes his father’s excoriating comments to heart, and decides the noblest thing to do is to step farther away from his privilege and attend a community college — a position that sparks his dad’s wrath anew.

His parents refuse to let him “throw away” his future (or the future they want for him) by going to a mere public school, especially a community college. (Never mind how many accomplished people are the products of a low-cost, public education.) No wonder a frustrated Charlie decries their whiplashing contradictions: “You say one thing, and do another!”

But is the only choice to be a champion of equity or a hypocrite?

Harmon is an astute enough observer of human nature, and a good enough playwright, to not make the situation so cut and dried. When Sherri answers Charlie as to how she can juggle two seemingly conflicted positions, she says something from the heart most parents can relate to: “Because you’re my son.”

Not that Admissions leaves the couple off the hook. Not at all. Sherri’s smug interactions with a colleague (Barbara Lindsay), whom she has charged with the difficult task of making the prep school seem more racially and ethnically diverse to prospective students than it really is, nails a kind of liberal window-dressing tactic that, despite good intentions, smacks of self-serving dishonesty.

And then there’s Ginnie (Macall Gordon), the white mother of Charlie’s biracial friend who got into Yale. When the fairness of her own son’s admittance is called into question, it threatens Ginnie’s fond relationship with Sherri — as well as the closeness of their two sons, who grew up together.

Though this description contains a few modest spoilers, the candor and sometimes scathing dialogue in Admissions — and the play’s multipronged refusal to settle for simplistic conclusions — are highly effective in the arena of live theater, springing from the mouths of talented actors.

This may not be a play for the ages, but it’s a play for right now: During the 2019-20 season, at least eight theaters around the U.S. are producing Admissions. And more theatrical works are bubbling up that explore the multifaceted issue of college admissions competition and fairness. One is the musical Ranked, written and staged by teachers at a California high school. Another is Lucy Thurber’s Off Broadway hit Transfers, in which a disadvantaged Black student and a disadvantaged white student vie for the same scholarship at an Ivy League college.

Audiences who view these timely and provocative productions will leave pondering the question: Who deserves higher education — and what sort — the most? 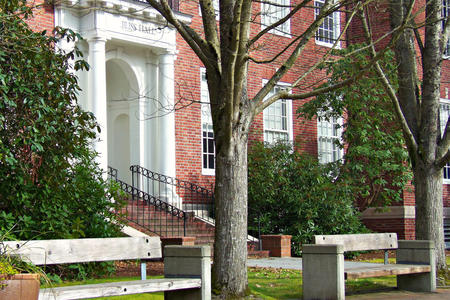 Lessons learned while attending Lakeside School and when I sent my own kids to college.

Lessons learned while attending Lakeside School and when I sent my own kids to college.