Bumbershoot could be smaller, cheaper and more local in 2020

Event producer One Reel is looking to the long-running Seattle festival’s past to help ensure its future. 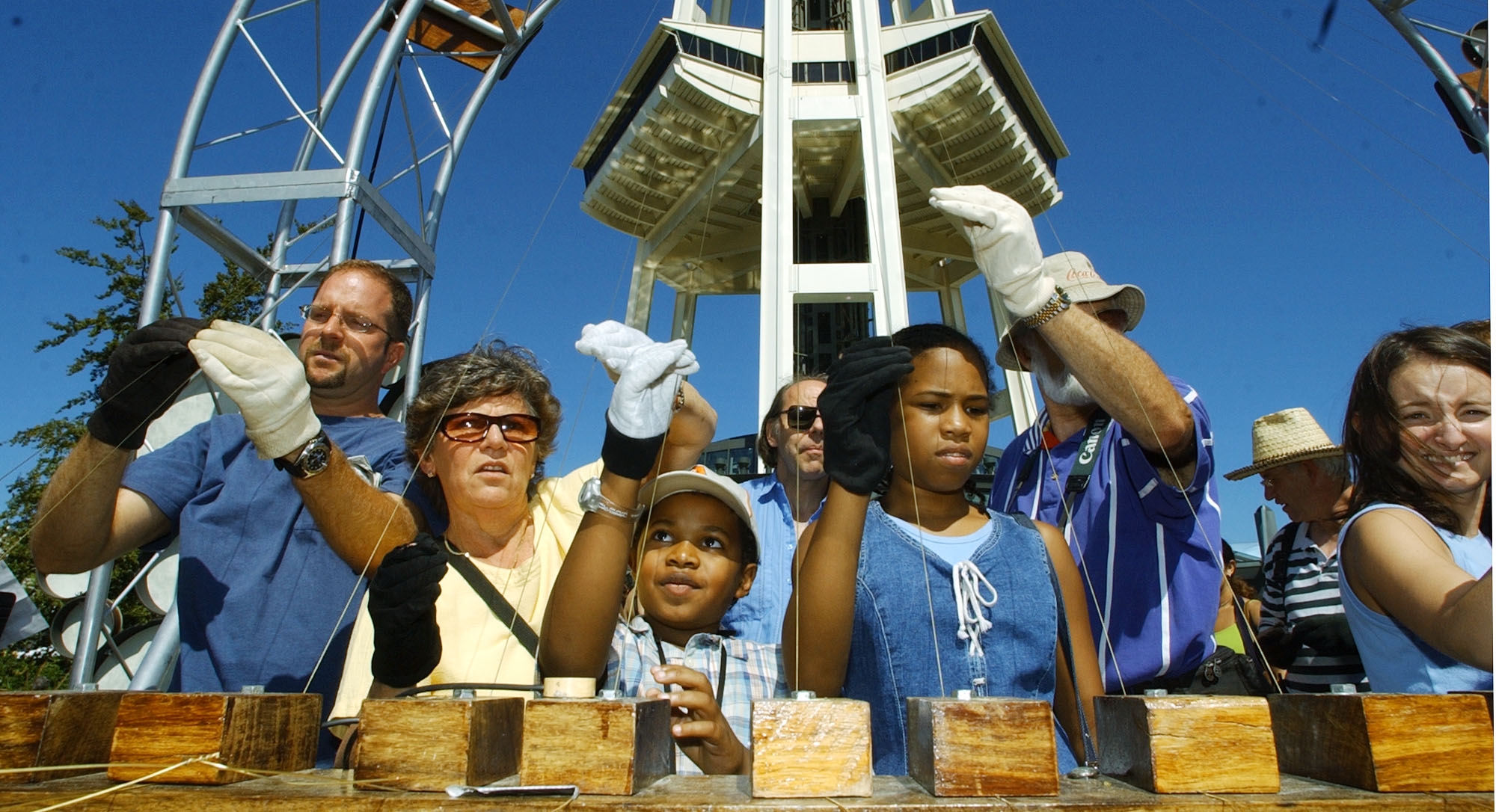 Bumbershoot, Seattle’s music and arts festival for the past 48 years, is likely to return this Labor Day, though in a smaller, scaled-back form. Festival producer One Reel said this week that it still holds the license to put on the event, and is working with Seattle Center and the city in hopes of mounting a smaller festival this year, with eyes on a 50th anniversary Bumbershoot next year, as well.

On Thursday, One Reel Executive Director Marty Griswold issued a statement that One Reel had been meeting with Seattle Center and the Seattle Office of Arts & Culture to “lay out a new way forward.” No agreement has been finalized and, given Bumbershoot’s challenges, it could still shift. Both Seattle Center and One Reel said more would be announced in March.

The forecast for Bumbershoot has been cloudy for several years, but became particularly stormy last fall when megapromoter AEG decided to step away from its contract renewal option, putting the future of the festival in doubt. Two months ago, One Reel posted an image online saying, “Bumbershoot will be back next year,” but further details were lacking.

Griswold said Thursday that the 2020 event will likely look different than the multiday, big-ticket festivals of the past, but will maintain the unique nature of the in-city arts fest. “Our goal this year is to return to our core values of inclusiveness, community engagement and the ‘specialness’ that has always been part of what makes Bumbershoot feel different than other festivals,” he says.

The goal would be for a more affordable festival (last year’s prices were $109 per day). This would also likely mean more local music acts, and a scaled-down footprint on the Seattle Center campus, which will still be a construction site this fall. Bumbershoot has been a money loser for most of the past decade, and some of that is because KeyArena was not being used as a stage. The facility won’t be available this fall (as it undergoes massive transformation into a National Hockey League arena and new-and-improved home facility for the Seattle Storm), and perhaps not in 2021, either.

The shift to a smaller festival this year would keep the long-standing arts and music event alive. It might also be a throwback to Bumbershoot’s roots — it started in the 1970s as a free community festival and drew 125,000 people in the first year, many who came for the hippie vibe. In the 1980s and ’90s, Bumbershoot transformed to a multiday festival, and ticket prices crept up to pay superstar talent. Rolling Stone magazine once called Bumbershoot “the mother of all festivals.”

Music festivals in general have struggled in recent years, after a glut developed over the past decade (Coachella is going strong, but other festivals, including Pemberton, have folded). But some say a smaller Bumbershoot isn’t necessarily a less interesting one. Jon Stone was a producer of Bumbershoot for 26 years, and former director of One Reel. He says this pivot could be positive.

“My biggest hope would be that they do something radical,” Stone says. “This is a fantastic opportunity to do that and transform what we even think of as Bumbershoot.”

Though Bumbershoot’s music headliners have always been central to ticket sales, the festival has also included programming in arts, literature, theater, film and comedy, which has made it different than a cookie-cutter music fest. Those other offerings shrunk under AEG’s control, and Griswold hopes those elements can be brought back.

A local promoter will likely be involved in booking acts, which might mean a lineup that leans more toward Seattle-based bands. Last year’s festival, programmed by AEG, featured headliners like Tyler, the Creator and H.E.R., but none of the “big font” bands were from the area. Attendance last year was the lowest in Bumbershoot’s past three decades, with weekend totals estimated at less than 30,000, which in part led to this shift.

The city of Seattle owns Bumbershoot, but in the 1990s, granted the rights to produce the festival in perpetuity to One Reel. But the relationship between nonprofit One Reel and Seattle has been complex, especially as One Reel racked up debts, eventually leading to AEG stepping in five years ago to program the music.

As the prospect of a summer without Bumbershoot has floated around over the past few months, efforts to save the festival have intensified. A smaller festival would be easier to fund, and find sponsorships for, and Bumbershoot continues to have many supporters in government and arts organizations who want to see some form of the festival continue.

King County Executive Dow Constantine said in an email that Bumbershoot was a central component to arts and music in the city. “Since I was kid in this town, Bumbershoot has been a celebration of our commitment to art and artists,” he wrote. “We are known around the world for this festival — it has become a kind of a calling card.

“As Bumbershoot approaches its 50th year,” Constantine continued, “we should all hope and work for a path forward that continues to showcase our incredible local talent, and bring our growing region together.”

Tom Mara, KEXP’s executive director, says he embraces the concept of Bumbershoot becoming “more music-discovery-based.” “There’s been strategic talk about how to change gears and go back to a festival that gives exposure to the arts, and helps with discovery of music and the dissemination of culture,” he says. “That’s exactly what we try to do with our mission at KEXP.”

“Discovery programming” reflects the festival of the 1980s, when residents bought tickets for a full day, not always motivated by a superstar headliner. Tickets were less expensive in that era, as well, with more local programming, making the gamble worth the outlay.

Former producer Stone says Bumbershoot’s “sustained” success over decades is part of what makes it tough to program. “Ironically, with success, one of your biggest challenges is how do you keep this thing fresh?” he says. “That’s especially true when you have an event that becomes a multigenerational success. One generation may not care about what the past generation cared about.”

Though Seattle Center is crucial to Bumbershoot’s future, and the city’s commitment of the space is central to the festival going forward, the transformation of the site itself only adds to the complications. One music industry source says any promoter trying to program Bumbershoot without the use of KeyArena would likely lose money. And once the arena reopens (not before 2022), the hockey team’s preseason games could conflict with future Bumbershoots, as well.

Stone says competition from other festivals — and other entertainment in general — has shifted the role of Bumbershoot, which was once the central arts event of the year. “Some of the ways Bumbershoot has changed are a reflection of how the city has changed,” he says. “Some of it is the music industry in general.”

Still, the idea of being Bumbershootless in Seattle might be too much change even for present-day Seattle. KEXP’s Mara says he’s never heard anyone suggest that the festival should end: “I get misty-eyed when I think about the idea that there could no longer be a Bumbershoot,” he says. “I hope it can transform.”

One Reel’s Griswold says it will. He’s also bullish on hitting the 50-year anniversary in 2021. “A different-sized festival could have unique staging possibilities,” with more diverse artistic programming, he says. Consider the first Bumbershoot, in 1971, which included an electronic music jam (possibly the world’s first), horseback rides, a logging show and indoor motorcycle races. One of that festival’s “biggest draws,” according to One Reel history? A “Hot Pants Contest.”

This story has been updated to note that Bumbershoot’s 2019 attendance numbers were estimated to be less than 30,000 over the entire weekend, not per day.