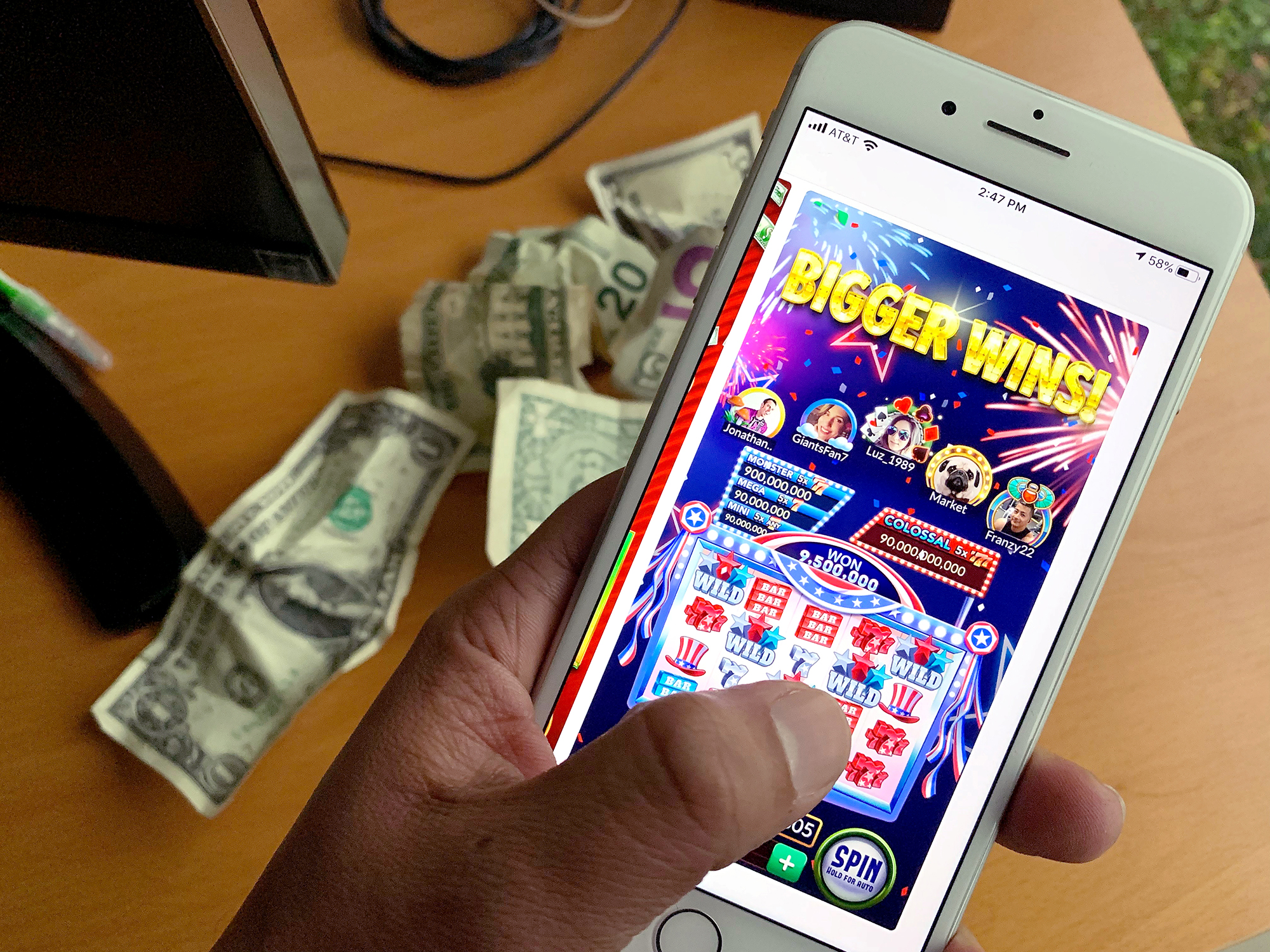 Suzie Kelly didn’t know what she was getting into when she downloaded a free casino app on her phone in 2014.

At first, Kelly said she played only a little, using the small amount of free tokens the app gave her each day to spin the digital slot machine.

Within weeks, however, the Texas grandmother said she was spending thousands of dollars inside the app known as Big Fish Casino, buying virtual chips that she could never cash in, but which simply allowed her to keep playing the game.

Over the course of four years, Kelly spent more than $300,000 on digital chips that could be used only inside the virtual casino app, she wrote in a recent letter to the Washington State Gambling Commission.

To fund her addiction, she drained her husband’s 401(k) retirement savings account and took out two home equity loans, she told the commissioners.

“I literally lost my sense of reality,” Kelly wrote. “My reality became the app.”

Big Fish Games, the company that operates Big Fish Casino, is headquartered in Seattle. And Kelly is now part of a class-action lawsuit — filed in U.S. District Court for Western Washington — alleging that the company is engaging in illegal online gambling. Under Washington state law, players caught up in illegal gambling operations are allowed to recover the money they’ve lost, which is the remedy Kelly and other plaintiffs seek.

The 9th U.S. Circuit Court of Appeals recently ruled against Big Fish Games, agreeing that the company’s practices as alleged in the lawsuit amount to unlawful gambling under Washington law. But court proceedings continue around certain aspects of the case.

Other users besides Kelly have filed court declarations about how they became addicted to the app, fueled in part by the game’s social aspect, which allows them to interact with other players.

“I could talk to people, and they couldn’t see me crying on the inside,” reads a court declaration from longtime player Jill Interrante, who said she first downloaded the app to help fill a void when her marriage was ending. Interrante estimated she spent “at least $200,000” inside the digital casino.

State Sen. Derek Stanford, D-Bothell, plans to introduce legislation early next week that would seek to ban some of the more abusive practices that he said came to light in the Big Fish Casino lawsuit. He said one possible protection would be to ban a company from asking players to accept new terms of service agreements that would prevent them from joining a class-action lawsuit. That’s something lawyers for Kelly allege Big Fish did last fall.

Stanford also wants to prevent game operators from ignoring players’ requests to take a break from the app or block their credit card accounts — requests Kelly said she made several times, only to get pushback from a Big Fish employee known as a “VIP host.“

Neither Big Fish Games nor the company that owns it, Aristocrat Technologies, responded to requests to comment for this article.

Stanford said rather than honoring users’ requests to disconnect their accounts, many social casino games like Big Fish Casino “go in exactly the opposite direction.”

“If someone says they want to stop, the company will say, ‘That’s great. We have a process. It takes a few days, and you have to jump through some hoops. And, in the meantime, here’s some free credits,’” Stanford said this week.

“It’s basically like someone is saying, ‘I want to stop drinking,’ and the bartender says, ‘That’s great, have a free one,’ ” Stanford said.

Stanford said he thinks handing out those types of intermittent rewards is a practice carefully calibrated to keep people addicted to the game. His legislation will seek to study that practice, to better understand how to regulate the industry, he said.

The measure would require games to bear warning labels if they involve in-app purchases or the ability to buy “randomized rewards,” sometimes referred to as “loot boxes.” Loot boxes are virtual goodie bags filled with digital items that assist with game play, with the exact contents often a surprise to the player.

Kloba’s bill would ban retailers from selling such games to people under 21.

Chris Reykdal, the state superintendent of public instruction, said he is particularly concerned about how games with “loot boxes” and in-app purchases affect minors. He said those games have “an addictive dynamic” that encourages kids “to keep playing more and more and more.”

He said that’s a problem partly because research suggests that spending an inordinate amount of time staring at screens may alter children’s brain development.

As it stands, Reykdal said, there are few safeguards that keep children from playing.

“When you are 8 years old and you are collecting gold, and it allows you to buy a bigger weapon, that is a tangible benefit to a kid,” Reykdal said. “It is, in effect, gambling — because the more I play, the better I get, and the farther I go in the game, I get rewards.”

He compared the games to the candy cigarettes of decades past, which he said companies used to prepare children to buy real cigarettes when they grew older.

“I don’t want companies easing them in on these games, so they can get them to real gambling later,” Reykdal said.

A lawsuit filed by the Quinault Nation last year challenged Valve, the Bellevue-based game company, over the use of loot boxes in one of its games. The suit says that by selling tokens that can be used to unlock a randomized reward, Valve created “basically an online slot machine.”

Leaders of the Quinault Nation, which runs a brick-and-mortar casino on the Washington coast, didn’t respond to requests for comment. Neither did representatives of Valve.

Stanford, the state senator, said he eventually would like to address loot boxes, too, in what he hopes becomes a larger conversation about mobile games and addiction. He said in some cases, children have been known to rack up major expenses playing online games with in-app purchase options.

“If they have access to a parent’s credit card or something, they can kind of unknowingly spend large amounts of money,” Stanford said.

For their part, creators of some online casino games that have been under fire from various lawsuits say their products don’t involve gambling at all. At a recent hearing in Olympia, some company officials said the recent legal challenges have created a cloud of uncertainty that could hurt their industry and, in turn, the state economy.

“The entire state of Washington reaps the benefit of a thriving tech sector, and the game community is absolutely a part of this industry that creates new technology and software,” said Kristina Hudson, executive director of OneRedmond, a group that promotes economic development in Redmond, the home of Microsoft and other tech companies.

At the same hearing, leaders of a handful of gaming companies urged lawmakers to pass a measure that would ensure their products aren’t classified as illegal gambling under the Washington law that lets players recover their losses.

“The vast majority of our players, in fact, never spend any money playing our games,” said Joe Sigrist, general manager of DoubleDown Interactive, a company that has also been hit with a class-action lawsuit. Sigrist said his company’s games were of “recreational and entertainment value only.”

But opponents of the measure — House Bill 2720 — said it would unfairly negate the ability of players to get their money back from such games — just as Suzie Kelly is trying to do in the case against Big Fish Casino.

“I think it is extremely important to understand what these games actually are: They are not games of skill, like Candy Crush or Angry Birds,” said Alex Tievsky, a lawyer representing Kelly, speaking about the virtual slot machines. “... We are talking about dangerous and illegal gambling games.”

In her recent letter to the gambling commission, Kelly said she learned that lesson the hard way.

“... I am unbelievably lucky that my addiction to Big Fish Casino didn’t cost me my marriage,” Kelly wrote. “But financially, we’ve lost everything and don’t know how we will ever recover.”