How will the new hardline leader of the Seattle police union change its place in the labor community?

Before losing in a landslide election this week, president Kevin Stuckey prioritized close ties with the King County Labor Council. 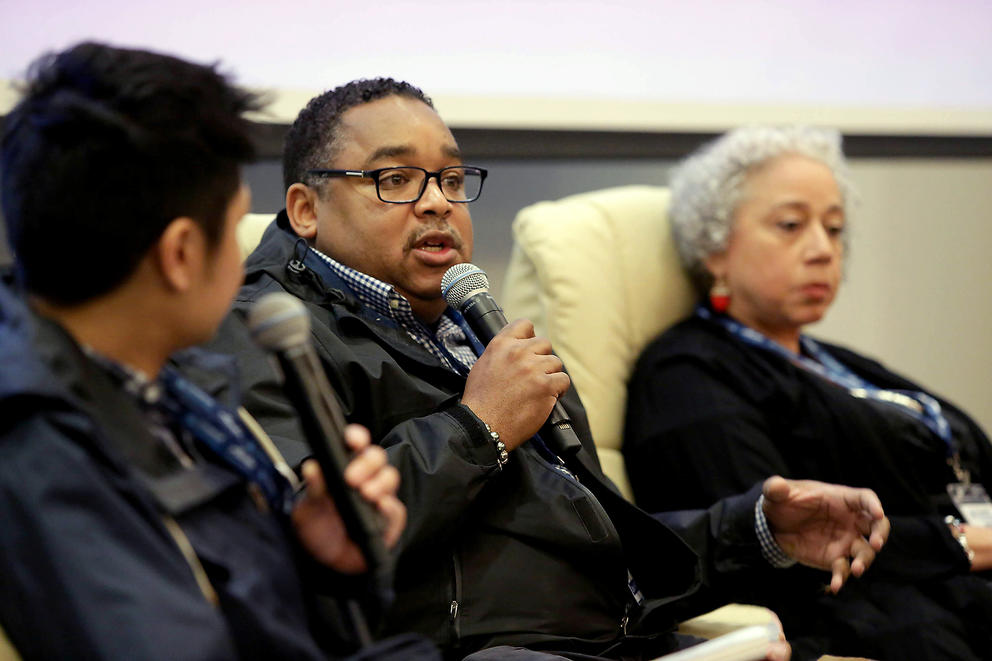 Before losing his job as president of the Seattle Police Officers Guild, Kevin Stuckey had spent his tenure cultivating a relationship with King County’s broader labor community. Amid national tension between the pro-union progressive movement and law enforcement, the close ties have stood out.

But Stuckey this week was swept aside by his own members, losing his bid for reelection in a landslide to a hardline replacement, Mike Solan. His loss leaves the future of the relationship with labor an open question. Already, Solan’s election has spurred new scrutiny of the police union’s place within the larger labor community, with some activists suggesting the guild’s expulsion.

Solan has not given any indication he intends to move away from labor. But as Stuckey campaigned on the quiet progress he made in building relationships and negotiating contracts, Solan prioritized something else: shaping the narrative.

“Kevin is a little more of a behind-the-scenes guy,” said Rich O’Neill, himself once the police union’s president and now its media contact. “Mike is more up-front. I guess that’s what the membership saw that they wanted.”

The guild’s relationship with the labor community goes back to December 2014, four months after the narrative-shifting protests in Ferguson, Missouri. The union had previously existed separately from the labor world of teachers or nurses or even firefighters. But, on the urging of its then-President Ron Smith, SPOG for the first time joined the Martin Luther King County Labor Council — a sort of union of unions — giving its delegate an active role in the body’s decision-making.

That relationship grew closer under Stuckey, who became his union’s president in 2016. Stuckey, a soft-spoken man who prefers to stay out of the spotlight, joined the labor council’s executive committee and started showing up on behalf of issues that were important to unions — testifying to the Seattle City Council in favor of a more predictable schedule for workers or, recently, joining striking nurses in the picket lines outside of Swedish hospital.

In exchange, Stuckey and SPOG enjoyed strong backing from the labor community as the city council considered whether  to ratify a new contract with the guild. The council eventually approved the contract.

“In eight years I wasn’t able to get those close ties,” said O’Neill. “The last contract negotiation, [the labor council] showed up in support wearing SPOG T-shirts. That was amazing. That didn’t happen because they like to support the police. That was because of the effort Kevin put in.”

When Steve Williamson led the King County Labor Council from 2000 to 2006, he remembers consistent friction between labor and the Seattle police union. Williamson himself witnessed an officer shoot a Black man outside his Teamsters office, he said; When the department awarded the officer a commendation, Williamson drafted a letter denouncing the recognition.

“We wanted to send a message very strongly that labor was not in solidarity with the police officers in awarding this officer officer of the year,” he said, “because we felt like it was an overtly racist statement.”

This friction is felt nationally. Jacobin magazine, the pro-labor, socialist magazine, published an editorial in 2015 titled, “Why we can’t support police unions.” Some labor unions have called on the national AFL-CIO to expel the International Union of Police Associations from its ranks.

But, locally, as the police department worked through a mandatory overhaul of its use-of-force practices, labor and reform advocates felt some optimism that the needs of the police officers could be met while also addressing longstanding mistrust of the department in the community.

“That’s what the [Community Police Commission] was about,” said Lisa Daugaard, formerly a co-chair of the civilian police advisory board. “We were about the unification of the employee interests of SPOG and community needs. We invested an enormous amount of effort in their needs.” Daugaard, a friend of Stuckey’s, carried a lot of water defending the police union through some of the most tense moments of the reform effort.

For SPOG, the relationship paid off. When the union needed it, the labor council lobbied hard for a new contract, hosting press conferences and lobbying city council members, despite opposition from some members of the community.

Daugaard, however, has come to doubt the value of the relationship for the community. While emphasizing that she continues to respect SPOG members’ right to good working conditions, she said the labor council has not demanded enough from the police union to acknowledge the “unique impact of police officers on communities.” Stuckey has succeeded in projecting the image of a new era of cooperation, she said, but in reality it’s barely different than the SPOG of old.

“I see more continuity than change,” she said of Solan’s election. “I know it’s a struggle, but it’s been several years since we’ve seen SPOG leadership invest in building strong partnerships with groups concerned about the role of policing.”

Stuckey did not respond to a request for comment. A spokesperson for the labor council also declined to comment.

In 2016, Nicole Grant, executive treasurer-secretary of the labor council, told The Stranger that SPOG’s membership would bring the union out of isolation. “Changes are going to be more successful from buy-in from the officers,” she said. “Not everybody has the patience to do a process where they meet these people where they’re at. But I think to build real cultural change, change that the officers take to heart is going to be an inside game.”

The ascendance of President-elect Solan — a longtime cop who fiercely defends police in the public eye — comes at a crucial moment, as the city and the union prepare to bargain yet another contract and as a federal judge decides whether to finally end oversight of the department.

By all indications, this week’s SPOG election was not a referendum on the union’s relationship with labor, but about perception of police in the community. Solan promised members that the union would better control the narrative surrounding policing. At one point, he advocated hiring a public relations firm, O’Neill confirmed.

“To the average officer on the street, they didn’t know how important it is when other controversial issues are being discussed to have other labor groups stand on the steps of City Hall and demand a contract,” said O’Neill.

There are few — if any — working examples of a perfect relationship between labor and police unions. But Williamson said it’s worth trying to figure it out.

“None of the current ways it’s being done works for the community, so there’s going to have to be an expansion of creative ways to both protect the workers and protect the community,” he said. “We have to invent that, because it’s not in place anywhere I’ve seen.”