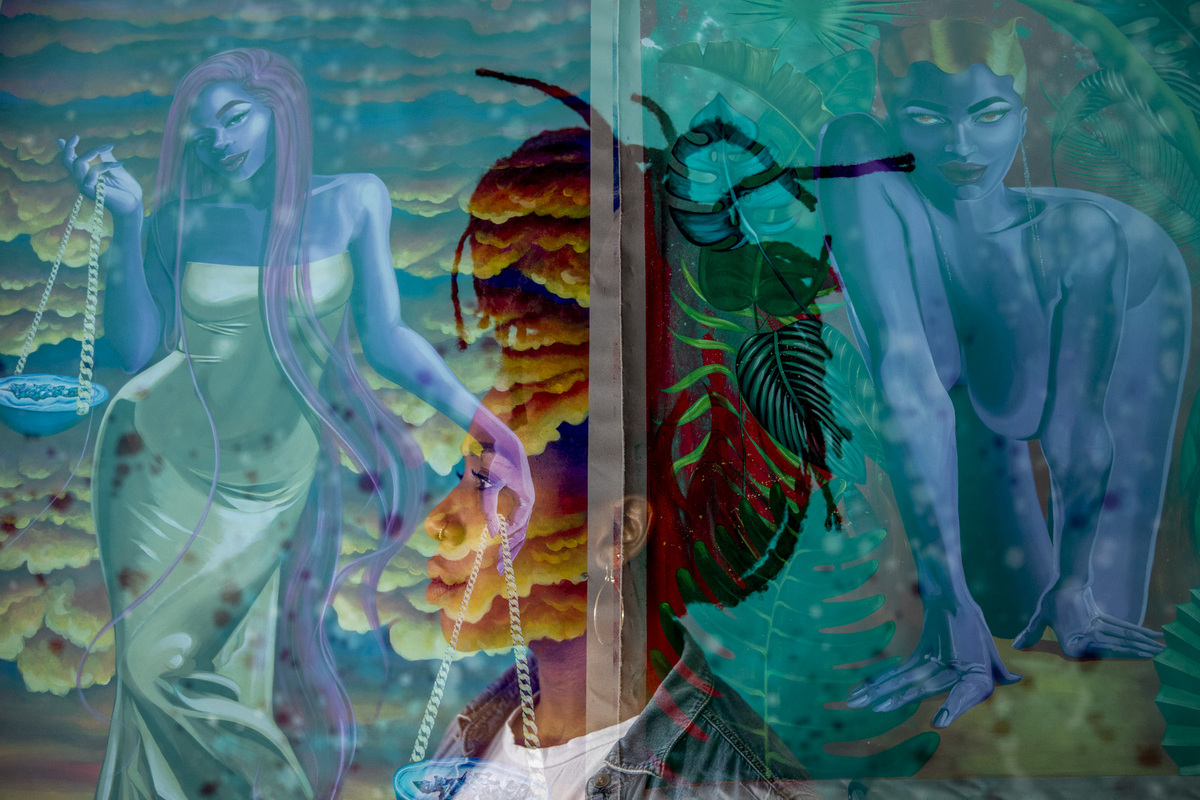 In this double exposure photograph, Seattle muralist Aramis O. Hamer appears with two pieces from her zodiac series, ‘Libra’ (left) and ‘Leo,’ in her Ballard studio on Feb. 11, 2020. (Dorothy Edwards/Crosscut)

In Aramis O. Hamer’s sunny Ballard studio, two houseplants are bursting from white plastic pots. Their tear-shaped leaves spill over like paint poured down a wall. The artist says she recently placed them closer to the window. “They weren’t doing as good in the back,” she explains. But after the move: “They grow so fast, I’m just blown away.”

The plants’ sudden exuberance parallels Hamer’s artistic trajectory in Seattle, where she’s become known as a painter of cosmic murals featuring goddess figures in psychedelic color fields. Since moving here from Chicago in 2013, Hamer has transformed from nurse to working artist.

What had started out as a creative way to decompress after stressful hospital shifts turned into a realistic source of income, once she settled into the Pacific Northwest. In 2016, Hamer applied to the Office of Arts and Culture to create a mural for KEXP’s headquarters — and to her surprise she was chosen. Stretching 140 feet long, “For the Love of Music” was her first mural, and featured the face of a Black woman with luminescent purple skin amid a blue cosmos sparkling with broken CDs.

Though that mural was eventually taken down, it sparked an artistic growth spurt. In 2017, the Africatown Community Land Trust tapped Hamer to paint a mural at the Liberty Bank Building in the Central District. To honor the site’s history as the first Black-owned bank in the Pacific Northwest, She put the faces of the bank’s founders on floating bills. A sea of candy-colored hands reaches up toward the word “Liberty,” spelled out in gold chain, Hamer’s nod to the evolving significance of chains in Black culture, from tool of oppression to symbol of success.

Her influence continues to sprout up all over. She won the 2019 Neddy Award from Cornish College of the Arts; she’s creating new work for a group show at Bellevue Arts Museum this fall; and she serves on the public art advisory board of the Midtown Square development in the Central District. And right now, she’s making a series of zodiac paintings that she says “celebrate Black girl magic.”

What influences what and who you paint?

I love being a Black woman. I feel blessed and honored to be in this vessel, and I wanna personify the Black woman in the way that I internalize and feel about her. Every culture personifies their gods in their own image, so why can't it be a Black woman?

If you weren’t a painter and muralist, which other mediums could you see yourself in?

Probably dance with aerial acrobatics. I actually danced my whole life. I was in a praise team for my church and I did cheer and drill team.

Been in Seattle: Seven years.

Named after: The cologne. "It's so funny when I talk to Black men in their 50s and 60s, they immediately know what Aramis is. It was such a popular scent. My dad loved it."

See more of her work: aohamer.com

Randy Ford and David Rue have a show coming up called Black Bois. I'm going to see it on Valentine’s Day, one night only!

How do you make an artistic life work?

I've been professionally pursuing my art for about five or six years. Before, it was chaos all the time. I've gotten a lot more disciplined — I feel like I'm finally getting my bearings. I'll paint murals for small business owners or commercial and residential buildings. I also sell my originals online or through different shows. I do festivals and pop-up events. Different gallery spaces or developers will hire me as an art consultant. And I teach.

What do you think people get wrong about being an artist — particularly in Seattle?

I don't think artists know how many opportunities are out here. Just about every opportunity that I've gotten, I searched for it. I'm on all the newsletters. Artist Trust, 4Culture, the Office of Arts and Culture. All these different organizations who offer grants, who are looking to hire a muralist, who are trying to add to an art collection. Maybe if I was from here, I wouldn't search as much. I think maybe Seattle artists sometimes feel that there isn't as much support for the art, but there actually is. Other cities just do not have the level of infrastructure Seattle does. Seattle is pretty unique in the way that they support the arts.

What would solve the most pressing issues facing local artists right now?

Studio access changed my life. I found this old video of when I was painting in my living room from 2013. I had a sheet tacked to the wall to try to prevent paint from getting on the wall. [Without a studio] I could never do these paintings of this scale and this size. All these paintings led to the opportunities I have now. This building [where this interview takes place and her studio resides] was a warehouse converted to an art studio. So some of the industrial spaces, some of those old warehouses [could be] reserved as artists studios. It doesn't have to be fancy; actually, the less fancy, the better.

Who do you think is “one to watch” in the Seattle arts scene?

I would say Christopher Paul Jordan. He's in Tacoma. He won a Neddy Award in 2018. Chris is making major moves.

Whose art are you currently obsessed with?

I'm not obsessed with any one particular work, I'm inspired by the movement. The fine art world is starting to recognize Black artists as being a part of the conversation.

As a former nurse, do you think your artwork is healing?

I know it heals me as the creator. I want people to feel empowered from it. Maybe they can take it as a reflection that now they have the power to be able to start their healing process. I don't know if my work is doing that, but I definitely want people to see themselves in connection to the wholeness of the universe.

by / February 5
Article continues below