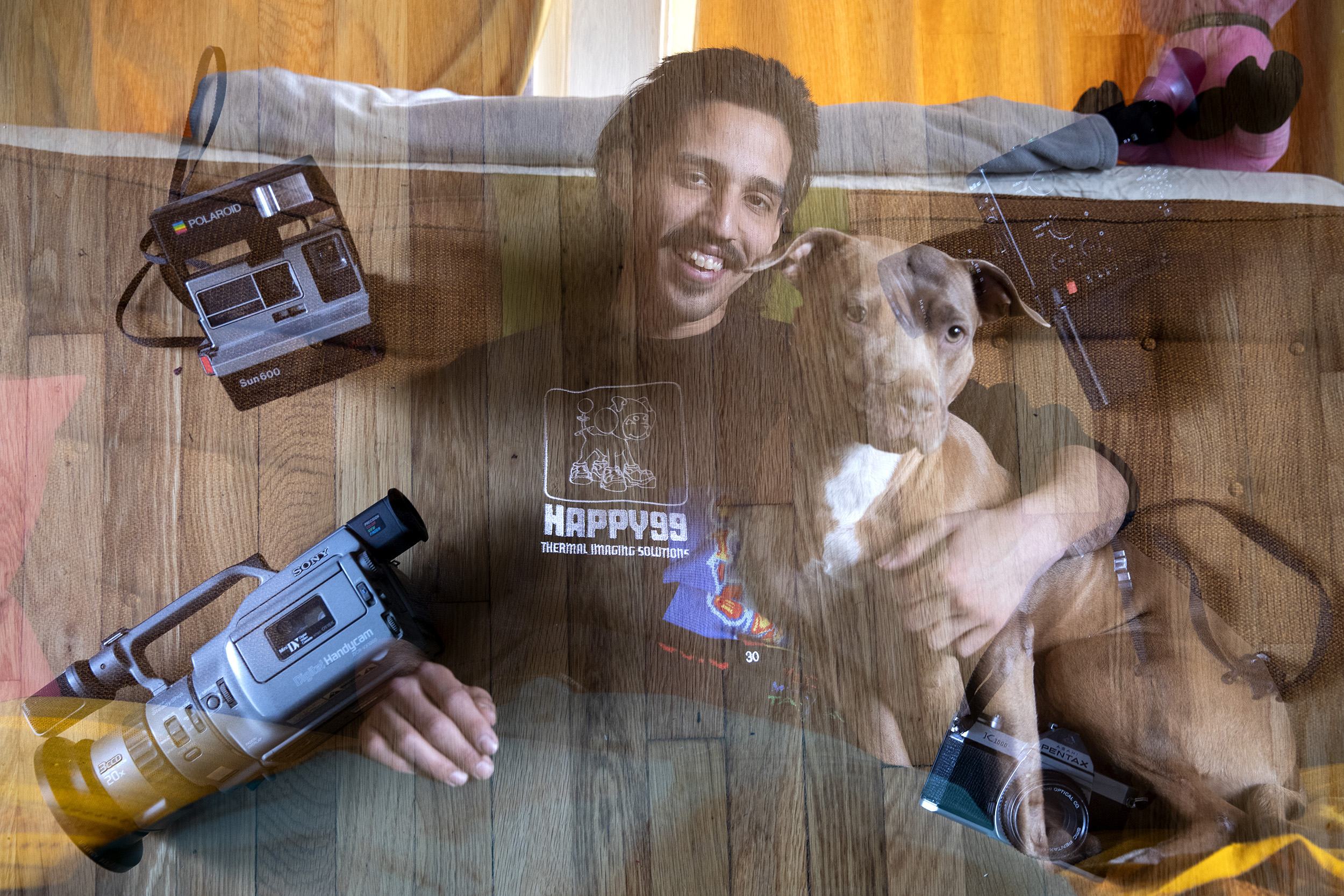 A man takes off on a motorcycle and a violin begins the song “Mi Gusto Es” by Mexican singer Antonio Aguilar. Cut to short clips of three chihuahuas on a roof, scenes of a Mexican town surrounded by mountains and a close-up of a woman wearing a flowing veil. Glimpses of a pastoral green landscape pass by. This is POCHO, a video by Leo Bañuelos.

Meet Your Maker is a new series of quick interviews with local artists, showcasing the vast and vibrant range of people making creative work around the Pacific Northwest. Watch for a new Meet Your Maker interview in the Crosscut arts and culture section each week.

Originally from Naples, Florida, Bañuelos is known within the Seattle skate community for filming and producing queer skateboard videos. His photo essay on skaters in drag (a shoot he directed) won second place in a Thrasher Magazine zine competition. But the self-taught filmmaker’s most recent project, which premiered last year at LoveCityLove’s “Exhibition Elsewhere,” is not about skateboarding at all.

Instead, Bañuelos documents his grandmother’s 90th birthday in Nayarit, Mexico. Grainy scenes of lakes, mountains and fields lead to a family homage: slow-motion shots of people dancing and his grandma surrounded by kin. As in his skate videos, vintage cameras and natural sunlight bring his film style to life.

Bañuelos was originally inspired by the skateboarding videos that began to appear on the internet in the 2000s. He started filming as a young kid in Florida, sneaking into his sister’s room to use her small point-and-shoot camera.

“It only had a minute or two of storage, maybe three at most” he recalls. “So we were taking very small clips [of skateboard stunts] and then having to delete them if [the trick] wasn't a land.”

Since then, Bañuelos has maintained his lo-fi aesthetic. When filming, he prefers to use vintage technology: His 1995 Sony VX1000 makes for crisp color with a dash of ’90s MTV reality-show nostalgia. Footage taken with a 1960s Super 8 camera is grainy, but pleasing, like a Polaroid. When he shoots with 16 mm film, the footage is fuzzy with a glossy filter.

In March, as part of the 15th annual Children’s Film Festival at Northwest Film Forum, Bañuelos will pass his wisdom to a new generation of skater videographers ages 10 to 14. He’ll share the history of pioneering skateboard videographers, editing 101 and basic shot-making, and he’ll demonstrate tricks to give students a chance to film with his cameras. True to Bañuelos’ ethos, he’ll emphasize how to make art on a budget.

Why are you teaching a three-hour class on editing skateboard videos at this year’s Children’s Film Festival?

I wish I had that as a kid. Growing up, there were two people [skateboard filmmakers] I would watch, but I wasn't close with them. I couldn't bounce things off them or ask questions. I think if I had someone maybe I’d be in a better place ... but that doesn’t mean I’d rather be there. I like the independent side of things more. I think the idea of producing stuff for big corporations or brands is cool and brings money, but I like having full creative control.

Do you consider yourself an artist?

I do, but I don’t like to. When I hear people say it [artist] there’s a pretentiousness to it. I'd rather show someone that I'm an artist than tell them I'm an artist. There is value in words, but I think there's a lot more value in execution.

Where do you think your creativity comes from?

Probably from my Mexican grandma. The women on my Mexican side all do knitting and embroidery and are really good at it. [My parents] weren’t creative at all. Maybe they are, but they’re very boxed into who they became when they came to the States. They’re both immigrants. My mom came over here at 7 years old with her family and assimilated into the culture. My dad came here when he was 20 and worked the fields and didn’t see anything outside of surviving by capitalist means…. [He] probably perceived [creativity] as a traditional thing for women to do.

Why do you like filming in analog more than digital?

In digital, everything is so easily manipulated and sometimes looks unnatural. With film, there’s some beauty to it. The grain is what I enjoy the most, and how you can manipulate shots with lighting. There’s more heart and soul than there is in digital. I say that like I know a lot about film, but there’s still so much I need to learn.

How has your craft evolved?

If I wasn't queer I would’ve never done the “Skaters in Drag” feature. One of my skate video projects was named Machismo (2017), diving into masculinity and skateboarding as toxic. I tried to use more intimate music [than the standard garage or punk music]. The whole soundtrack is not in your typical skate video. That was kind of an early tipping point, where I was starting to identify with myself being more queer.

How do you identify now?

I'm a queer Mexican Cuban. I don't claim nonbinary, but I also think the binary is fluid. I present myself more cis-gendered than anything.

What’s the creative project you’re working on that you’re most excited about?

I have this [semiregular] dance party called “Queer Dance Affair.” I started it last July. I started going to more queer events and noticed that a lot of the parties were thrown by white cis-queers — even parties that were focused on people of color. I wanted the focus of my parties to be very queer and POC-oriented.

Any Seattle artists to watch?

How do you sustain your creative projects?

I was working full-time, but one night I went on to Cut.com [a local creative content company that makes viral videos] and saw that they had positions open. I ended up getting a contract gig with them. If I’m not working at Cut, I pick up other [video making] opportunities. When I don't have anything creative lined up, I Instacart, which is where you grocery shop for people and deliver it to them.

What’s the best way to address the issues facing the local art community?

If the cost of living in the city was substantially reduced, I think a lot more people would be thriving creatively. I also think — this may contradict what I’m saying — a lot of people need to go out and try and take a bite. Yes, there's privilege that is required, but there's also an exceptional amount of determination and effort that’s [required] for people to execute their visions. Because of the barriers, you have to keep pushing and be OK with getting knocked down.