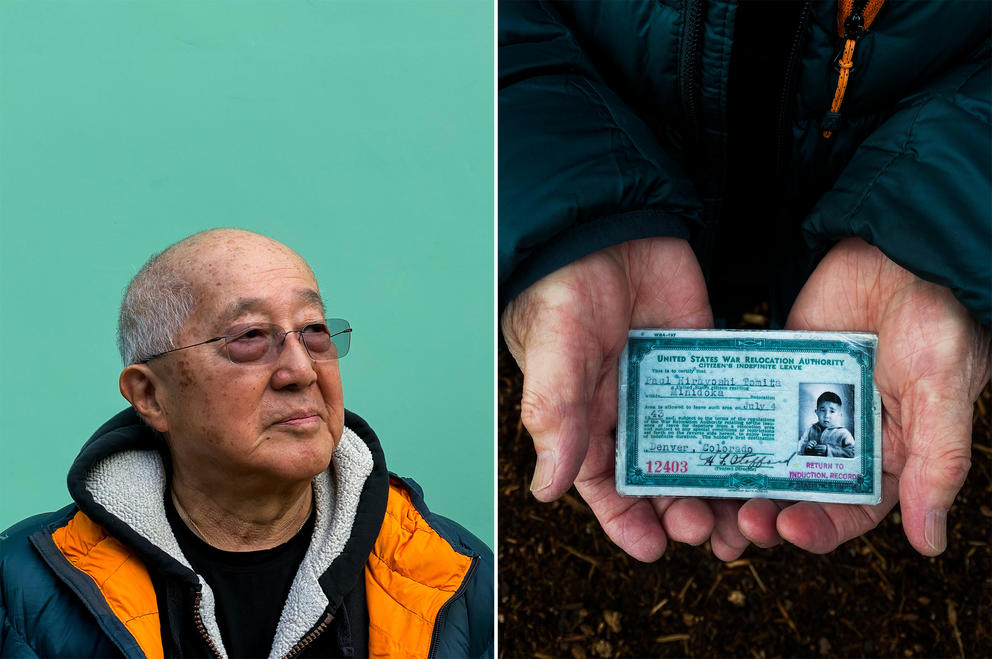 As a young child, Paul Tomita was detained with his family in a Japanese American concentration camp during World War II. He is photographed in Seattle on Feb. 14, 2020. “It destroyed our family,” he says. (Dorothy Edwards/Crosscut)

Armed with arguments that present-day policies hearken back to internment in the World War II era, Japanese Americans have joined the fight against detention of today’s immigrants.

Tom Ikeda, executive director of the nonprofit organization Densho, a Japanese term that means “to pass on to the next generation,” said federal immigration officials are “rounding up and placing under guard people primarily because of who they are, not so much because of what they did.”

On Sunday, Feb. 23, dozens of Japanese Americans plan to be at the Northwest Immigration and Customs Enforcement Processing Center in Tacoma, calling for an end to immigrant detention. The newly launched Tsuru for Solidarity, a national advocacy group born out of what some see as the Trump administration’s draconian policies against immigrants, is focused on stopping the cycle of incarceration of the undocumented.

Tsuru means “crane” in Japanese, a symbol of peace and compassion meant to express solidarity with “communities that are under attack,” the advocacy group says.

The upcoming protest in Tacoma commemorates the 78th anniversary of President Franklin D. Roosevelt’s Executive Order 9066 in 1942, which led to the incarceration of approximately 120,000 citizens and immigrants of Japanese descent during World War II. The federal government tried to justify Roosevelt’s executive order as an attempt to defend the West Coast from potential spies for Japan. In 1988, however, President Ronald Reagan signed the Civil Liberties Act, which declared that the order to relocate Japanese Americans was sparked by “racial prejudice, wartime hysteria and a failure of political leadership.” The legislation included a formal apology and $20,000 in compensation to each surviving victim of the camps.

At the Tacoma demonstration, the local chapter of Tsuru for Solidarity is joining forces with Latino-led organizations such as La Resistencia. Tsuru for Solidarity will also stage a “National Pilgrimage to Close the Camps” in Washington, D.C., in June, when activists plan to hang 125,000 paper cranes on the White House fence.

Maru Mora Villalpando, co-founder of La Resistencia and an undocumented community organizer, said the partnership between her organization and Japanese Americans should serve as a model of how different communities can work together, even when one is no longer the target. Using the phrase "Never again is now," which refers to the commitment to never repeat anything like the Holocaust, Jewish groups have also recently joined the fight against ICE.

Villalpando also said that with the Washington state Legislature considering a private prison ban, the timing of the demonstration couldn’t be more appropriate.

“It’s time to test where everybody’s will is with regard to private detention,“ she said.

Last year, survivors of the U.S. internment camps and members of Tsuru for Solidarity demonstrated outside the Fort Sill Army post in Oklahoma, where the Trump administration planned to detain 1,400 immigrant and refugee children. Established in 1869, Native Americans were once imprisoned at Fort Sill. It also served as a boarding school for Native children. In the 1940s, Fort Sill functioned as one of the many detention centers for people of Japanese descent rounded up by the FBI. The federal government also operated 10 internment camps for Japanese Americans in the Western states and Arkansas.

Paul Tomita, 81, a childhood survivor of the camps who lives in Bellevue, was part of the demonstration at Fort Sill.

“The way that the Trump administration is treating those at the Southern borders, it's even more cruel than us. At least they [mostly] kept our families together,” Tomita said, as he revealed an enlarged version of the exit card he kept from the Minidoka War Relocation Center in southern Idaho, where he and his family were detained for more than a year. “These guys, they purposely separate children. Who would do that, right?” he said.

In July 2019, a month after the demonstration at Fort Sill, the U.S. Department of Health and Human Services announced it was scrapping its plans to house children there, a victory Tomita relishes. He plans to demonstrate in Tacoma next.

But Japanese Americans protesting in Tacoma aren’t all survivors. Kiku Hughes, a 28-year-old graphic novelist, who is half Japanese and half white, plans to take part in the action. Hughes’ grandmother was detained as a teen at the Topaz War Relocation Center in Utah for about a year.

“Our main goal is to close concentration camps in the United States, all of them,” Hughes said on a recent afternoon, while sitting at Third Place Books in Lake Forest Park.

“It is such a loaded word, but it also is the incorrect term and kind of reduces the level of harm that was done by the Nazis and those camps,” Hughes said, noting that “death camps” might be a more appropriate term when referring to the Holocaust facilities, where millions were killed.

Hughes, author of the upcoming graphic novel Displacement, never met her grandmother, who, like the majority of others who were detained, was a U.S. citizen. But she said she feels connected to the history of concentration camps nevertheless.

“It's sort of about intergenerational trauma,” Hughes said of her book, in which the main character travels back in time and lives alongside her grandmother.

Hughes said she became more interested in learning about her family’s past after President Donald Trump was elected in 2016 and what she referred to as his administration’s “blatant, race-based fear politics.”

“There was a lot even my mom didn't know because there's sort of a whole issue of people who are in camp at the time not necessarily sharing their stories,” Hughes explained.

She said one detail that stood out in her research was that Japanese Americans were more active in protesting their conditions than some historical summaries might have you believe.

“I think there's a big trend in the covering of Japanese American camps in sort of painting people within them as complacent, or willing to go along with it, because there was this sort of model minority aspect,” Hughes said. “You know, look at how peaceful these Asians were acting and even in camp.”

But Hughes has learned there was actually a lot of resistance and acknowledgement that the incarceration was unconstitutional and wrong.

Hughes learned, for example, that there had been a work stoppage at her grandmother’s camp after a guard shot a man. In the end, the workers were able to have a public funeral for the person, who had been killed.

Stan Shikuma, 66, a retired nurse living in Seattle whose parents were placed in different camps, has revisited the Tule Lake camp in California regularly ever since he first traveled there in 1979.

“There was something about actually being in the place and learning the history that created some kind of bond,” Shikuma said. “It’s not a feeling of home, but it’s a feeling that this is a place that’s important.”

Shikuma said taking part in the protest on Sunday is important to him because “we feel we have the moral authority to speak on it because it happened to our families.”

“We need to be the friends and allies that we wish we had in 1942 because maybe things could have been different,” Shikuma said.

This story was updated to clarify the role of Fort Sill as a detention center during World War II.