Redistricting — the once-per-decade exercise of redrawing political boundaries — is set to begin next year. 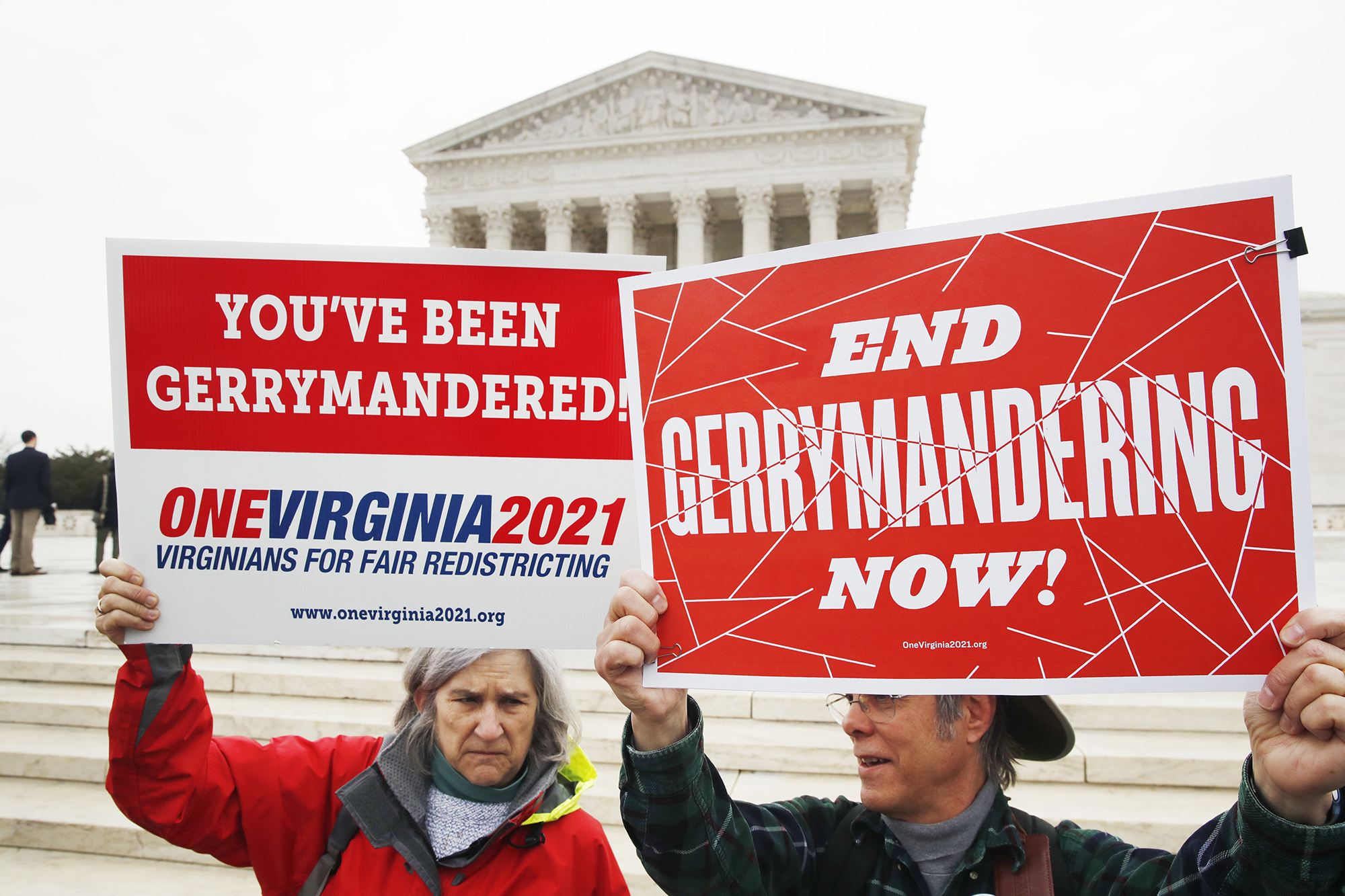 Sara Fitzgerald, left, and Michael Martin protest gerrymandering in front of the U.S. Supreme Court, March 28, 2018, ahead of court arguments in a case concerning gerrymandering on the East Coast. Unlike many states, Washington state uses a bipartisan redistricting commission to try to prevent one political party from drawing district maps in its favor. Still, some lawmakers have ideas to make Washington's process better. (Jacquelyn Martin/AP)

One of the biggest decisions that will shape Washington state politics for a decade won’t appear on any ballot.

The state’s process of redistricting, in which the boundaries of state legislative and congressional districts are redrawn to reflect changes in population, is set to begin next year, using the results of the 2020 census.

Observers largely agree that Washington’s redistricting process is better than most other states’. That’s because the state’s political lines are redrawn by a bipartisan commission, rather than by elected legislators — making it harder for the party that controls the Legislature to create a map to its own advantage.

Elsewhere, lawmakers have been accused of creating lopsided districts designed to keep their party in power. In North Carolina, for instance, judges struck down the state’s political maps for both the state Legislature and Congress in response to different gerrymandering lawsuits, agreeing that the state’s Republicans skewed the lines too much in their favor.

In a lawsuit in Maryland, Democrats were accused of similar gerrymandering to benefit their party.

No similar blowup has happened in the past few decades in Washington, which has relied on its bipartisan redistricting commission to reshape district boundaries since 1991.

Yet many people think Washington’s redistricting process still needs to be modernized and can be improved — and that the state shouldn’t pass up a once-per-decade chance to make those changes in 2020.

People watching the process say much is at stake, particularly for communities of color that may be underrepresented in politics.

“Redistricting really allows you to keep communities together, and have them represented in the same way they function in real life — or they can be cut into pieces, to the point where their influence and power and ability to be represented is diluted,” said Crystal Fincher, a political consultant who works mostly with Democrats.

Now, a proposal moving through the state Legislature would make several adjustments to the state’s redistricting process, with the goal of making the bipartisan commission more transparent and accessible.

House Bill 2575 would require the five-member commission to go through training on the state’s Open Public Meetings Act, as well as the state’s Public Records Act, in addition to learning about nonpartisan redistricting. The commissioners would need to issue a report at the start of the process that would describe their priorities and intentions, as well as which criteria they plan to use to make decisions.

Public forums would be required around the state — one in each of Washington’s 10 congressional districts — to gather feedback on any proposed redistricting plan.

“The idea is that, at the start, the commissioners work to make sure they’re getting around the state and hearing from local elections officials and county auditors offices, and to make sure people’s voices are being heard,” said state Rep. Mike Pellicciotti, D-Federal Way, the bill’s sponsor.

As before, the 2021 commission would consist of four members appointed by each of the Legislature’s political caucuses, plus a nonvoting chair. That means Republicans will choose two of the voting members, while Democrats will choose the other two. As in the past, at least three of the four voting commissioners would have to agree on a redistricting plan for it to go forward.

But in a change from the status quo, each commissioner would get a salary commensurate with what state legislators are paid, and have access to professional staff — rather than operating more like volunteers, as they do today.

Kamau Chege, director of the Washington Census Alliance, said having paid commissioners is important to encourage more diverse representation on the commission.

As things stand today, Chege said, lawmakers who choose commission members “routinely appoint old, typically white political operatives who are retired, who have a lot of money and time to spend on advancing the partisan interests of each of their respective parties.”

The Census Alliance, which supports Pellicciotti’s bill, is a coalition of more than 70 organizations led by people of color from across the state.

“I think what we want to see this time around is communities who are directly affected by these districts to have a voice in who they trust to draw fair districts,” Chege said. That means districts that “don’t violate the boundaries of tribes and that respect communities of interest — and communities of color in particular, given how disproportionately white our delegation at the Legislature and at the congressional level tend to be,” he said.

Under Pellicciotti’s bill, some of the commission’s staff resources would be used to provide translation and language services, helping ensure people who don’t speak English as their first language can still be notified of public forums and participate in the commission’s meetings.

The bill also seeks to employ technology to help more people participate in the process. It would require the commission to accept comments through its website, as well as set up a system to allow real-time, remote participation at commission meetings for those who can’t attend in person.

“We live in such a digital world this day and age,” said Alison McCaffree, a volunteer lobbyist with the League of Women Voters of Washington who has been working on the legislation. “Why not have accountability be online and have notices on social media?”

At the end of the redistricting process, the commission would need to publish a final report summarizing all the public input it received, as well as the data and analysis it used to develop its final redistricting plan.

People who testify at commission meetings would also need to to identify whether or not they are lobbyists, a requirement not in effect today.

Pellicciotti's bill cleared the state House last week, and is scheduled for a Wednesday hearing before the Senate Committee on State Government, Tribal Relations and Elections.

The measure passed the House on a party-line vote, with the chamber’s 57 Democrats voting in favor and all 41 Republicans opposed.

State Rep. Jim Walsh, R-Aberdeen, summed up his opposition as: “If it ain’t broke, don’t fix it.” During the House debate, he said Washington’s redistricting system is the envy of the nation and even the world.

“We have a system for handling our redistricting every 10 years that requires, in a very elegant way, bipartisan support for any redistricting plan that is ultimately accepted,” Walsh said. “It is transparent, it is nonpolitical, and it is effective.”

Walsh called the bill a solution looking for a problem, since he doesn’t believe Washington has an issue with redistricting.

But others argue that politics still plays a heavy role in the process, even if both Republicans and Democrats are involved.

Alex Hays, a Republican political consultant, said he thinks Washington's redistricting system is a good one that avoids the “aggressive gerrymandering" that occurs in other states. Still, he said, the commission does “have a subtle bias in favor of incumbency.”

“Notice how few incumbents are actually ever redistricted out of their seats,” Hays said. Commission members in the past have taken steps to ensure sitting lawmakers aren’t moved out of the boundaries of their current districts, he said. That could mean that, if Democrats pick up seats in the 2020 election, the redistricting process that gets completed over the next two years could cement their gains for the next decade, he said.

U.S. Rep. Denny Heck, an Olympia Democrat, said that if Washington lawmakers truly wanted to improve the process, they would remove themselves entirely — meaning, they wouldn’t even be involved in appointing the commission members. Heck, whose congressional district was newly created in 2012 and shaped by that year’s redistricting, agreed that today’s process amounts to an “incumbent protection racket,” since commission members are handpicked by the Legislature’s political caucuses.

“We still have a system that leans toward politicians picking their voters,” Heck said. “It’s a bipartisan racket, but a bit of a racket nonetheless.”