The $300 million proposal comes as the Washington Legislature considers allowing a similar, yet smaller tax in King County 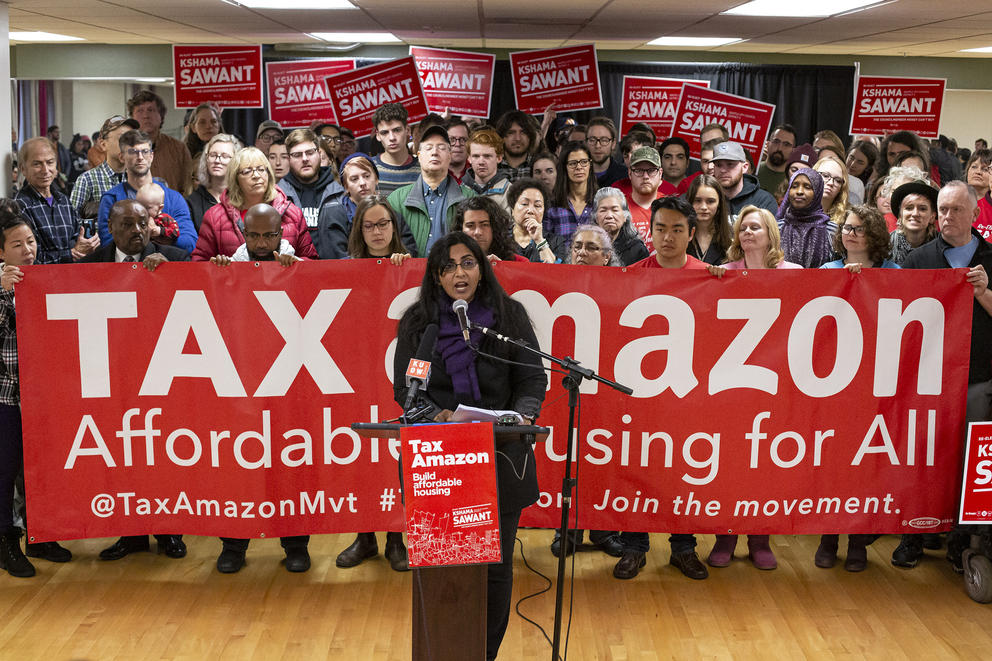 Seattle City Councilmember Kshama Sawant addresses members of the media during a campaign press conference at the Langston Hughes Performing Arts Institute in Seattle on Nov. 9, 2019. (David Ryder for Crosscut)

Seattle City Councilmember Kshama Sawant made good Wednesday on a campaign promise to revive the effort to “Tax Amazon,” proposing a payroll tax that she said would raise $300 million a year from Seattle’s 825 largest businesses.

The proposal comes despite — or perhaps because of — a parallel effort unfolding in the Washington state Legislature that would authorize King County to enact a similar, but smaller tax. However, some businesses and legislators want to use that state proposal as a means to bar — or preempt, in legislative speak — Seattle from passing its own tax on business.

Sawant and the rest of the city council oppose state preemption of additional business taxes at the local level.

Sawant’s pitch — to impose a 1.7% tax on the payroll of the largest 3% of businesses — is a stark contrast in political approach to the proposal in Olympia. As Mayor Jenny Durkan, King County Executive Dow Constantine and Democratic legislators work to build consensus among politicians, service providers and businesses for a tax, Sawant said she is concerned only with making the city’s largest companies contribute more to address the housing and homelessness crises.

Big businesses, Sawant said, “have shown us over and over and over again that they are not on our side…. The door is open for them, but we are not going to hold our breath.”

After months of promises, Sawant gave some detail on Wednesday of what she had in mind — but she still has not unveiled any actual legislation. She promised to do that within weeks.

Sawant said her working plan would raise $300 million each year and allow Seattle to build roughly 8,000 additional units of new, affordable housing over the next 10 years. This would come on top of the housing Seattle is already building every year.

“It is my duty to put forward, in coordination with our movement, policy proposals to match the scale of the problem and to mobilize the community to win them,” she said in a City Hall press conference Wednesday.

The tax is not a head tax, Sawant said — a nod to the contentious fight over a per-employee tax that played out in 2018. That proposal was adopted, then repealed by the council in the face of a possible ballot measure to roll back the measure.

Part of what sunk the 2018 tax was opposition from lower-profit businesses that may have been affected by it — in particular grocery stores that have high gross revenue, but thin profits.

The $300 million Sawant said her legislation would raise is more than what’s currently being discussed in Olympia. That proposal would allow King County to raise at most $120 million, according to estimates from Durkan’s office. And that money would be spread countywide, while Sawant’s would go only toward Seattle.

The legislation in Olympia so far has garnered tentative support from Amazon, Microsoft, Starbucks, Expedia and a slew of other large companies in King County. However, those same companies have implied — although not outright stated — that they would support the measure only if it included a ban on cities, Seattle in particular, from passing additional taxes on business.

The state proposal passed out of committee last Friday, and so far no legislator has proposed adding such a ban. But the discussions are still highly fluid. One of the measure’s sponsors, Rep. Nicole Macri, D-Seattle, said in a text message, “discussions are happening intensely now over all elements of the bill.”

That includes conversations this week with “all interested groups,” which includes business and labor.

Eight of nine Seattle City Council members signed on to a letter this week opposing any ban on Seattle passing additional taxes. In the letter, the council members said they supported the effort generally, “but we cannot currently support attempts that preempt us or strip us of our limited resources and make our city’s tax code even more regressive.”

Sawant sent her own letter to Macri on Wednesday, doubling down on her opposition. “It would in reality be an egregious selling out of working people,” she wrote.

Macri emphasized that a preemption has so far not been included, but she said many of her constituents appear to believe it has been.

This business tax discussion is a delicate balancing act of parallel efforts, set against a number of backdrops. The most obvious is the scale of the issue, around which there’s increasing consensus. Over 11,000 people were found to be homeless in 2019’s Point in Time count — a number that’s likely low. As it did in 2018, the McKinsey consulting company came out with an estimate of what it would take to meaningfully address the housing and homelessness issues in King County: between $450 million and $1.1 billion a year among all government, philanthropic and private efforts.

Sawant’s proposal also comes a day after the city’s head of the Ethics and Election Commission, Wayne Barnett, accused the council member of violating city law for using office resources for political purposes. In addition to her legislative proposal Wednesday, Sawant is pushing for a possible ballot measure. She advertised the ballot effort on her city website and with city materials, which Barnett said violates a policy that keeps campaigns and city business separate.

In a statement, Sawant said she looked forward to resolving the ethics complaint.

Amazon did not immediately respond to a request for comment.

In a statement, the Downtown Seattle Association, which also tentatively supports the Olympia effort, said: “We remain firm in our belief that a coordinated countywide measure is the most effective approach…. A Seattle-only approach undermines that effort.”

Mayor Durkan responded to Sawant's proposal with a blistering statement. "Being progressive means actually making progress. While slogans are nice, a failed, divisive fight that is high on rhetoric but low on outcomes, or one that funds lawyers instead of housing, is not an actual solution," she said.

As she unveiled her proposal Wednesday, no other member of the city council joined Sawant. Sawant said she had reached out to her colleagues and their absence should not be taken as a sign of anything.