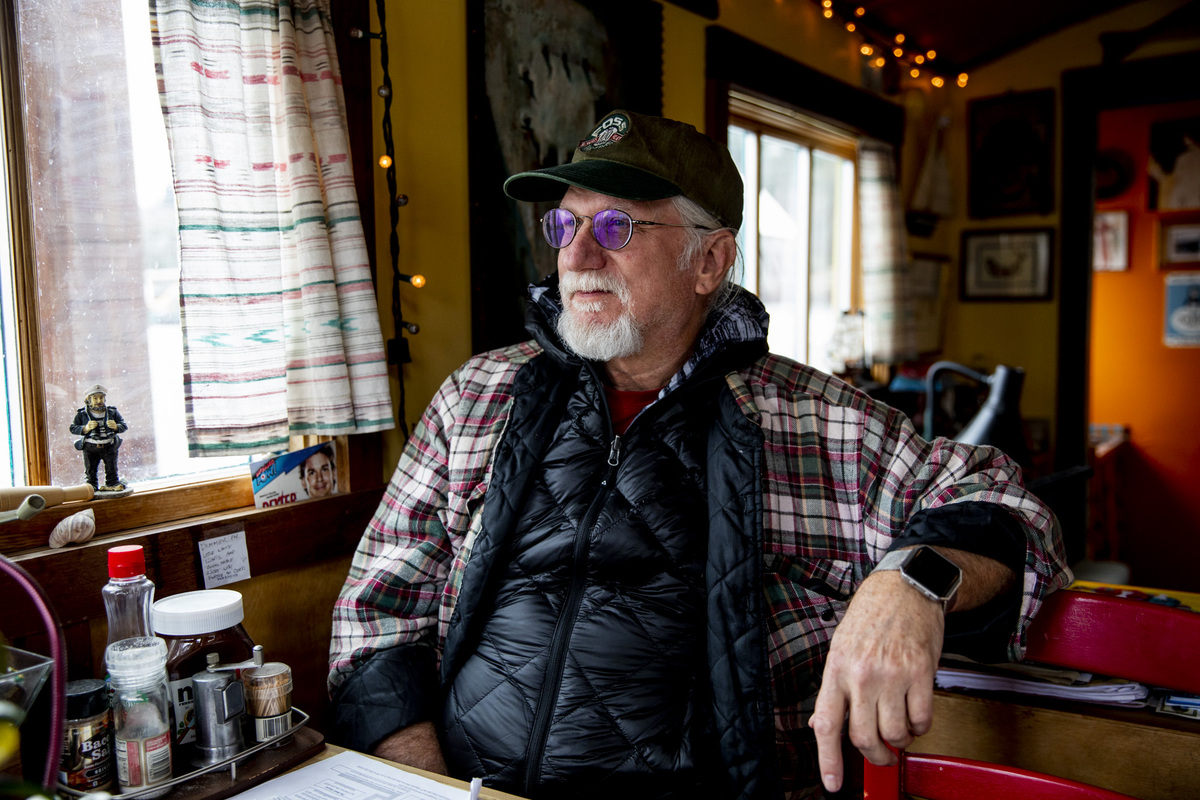 John Chaney inside his houseboat, which he shares with his partner, at Nickerson Marina on Feb. 11, 2020. (Dorothy Edwards/Crosscut)

The hull of Chaney’s home, a houseboat he docks at the Nickerson Marina, needed serious repair. But, to his relief, he was able to get all the work done and get his boat back on the water relatively quickly.

That was then. If a similar crash happened today, Chaney said, getting major hull repairs done on his floating on-water residence could take a year — or more — and cost tens of thousands of extra dollars.

Chaney and some of his on-water neighbors say they’ve recently been hit with more stringent permitting requirements by the city of Seattle, making it increasingly difficult and expensive for them to make needed repairs to their aging homes.

Chaney, the vice president of the Lake Union Liveaboard Association, said he fears the increased regulations could make it difficult for houseboat owners to continue to stay where they are, speeding up the transformation of Seattle’s on-water residences into vacation houses or second homes for the uber-rich.

“On our dock, we have a retired person who spent his whole working life in the marine industry,” Chaney said last week. “He fears he will not be able to afford to continue his simple life that he lives, in his houseboat he takes meticulous care of.”

Meanwhile, Chaney said, “The people who come there and stay there two or three days, they don’t get it. They don’t understand how to be on the water. They don’t know how to treat the environment.”

For state Sen. Jamie Pedersen, to hear such tales is especially aggravating. Twice in the past decade, the Seattle Democrat has sponsored new state laws aiming to get government regulators off the backs of people who own houseboats and floating homes.

Now, Pedersen is sponsoring another piece of legislation that aims to, once again, ensure that owners of Chaney’s specific type of houseboat can continue their legacy on the lake.

Pedersen, a lawyer who chairs the Senate Law & Justice Committee, said the city of Seattle’s decision to change the definition of “vessel” last year has created new hurdles for houseboat owners like Chaney.

Pedersen’s previous legislation, from 2014, gave special protections to Chaney’s class of houseboat, which is officially known as a “floating on-water residence.” The bill established that local regulators must accommodate such residences through “reasonable” shoreline regulations, and that local regulators couldn’t “effectively preclude” longtime owners of such residences from replacing, repairing or renovating their homes.

But Pedersen said Seattle’s 2019 change to what constitutes a “vessel” has deprived the houseboat owners of some of those intended protections. The wording change has “created a lot of uncertainty for folks” who have floating on-water residences that are, in fact, vessels, Pedersen said — something he claims his bill will resolve.

“For the most part, my interest is I want people to be left alone,” Pedersen said. “These communities have existed for 100 years in my district — they’re beautiful.”

He said if the city is worried about a specific issue, such as the houseboats properly managing their gray water, then the city should regulate that specifically. “Don’t just try to regulate them out of existence,” Pedersen said.

Because Pedersen’s 2014 legislation capped the overall number of floating on-water residences allowed in the state, their numbers aren’t growing, he said, which he thinks should help quell regulators’ environmental concerns. Officials estimate there are only a few hundred such residences statewide; the bulk of them, more than 200, are in Seattle.

For its part, the city of Seattle disputes that its recent tweak to the definition of “vessel” has changed the permitting regulations for floating on-water residences. “Those are two separate issues,” wrote Bryan Stevens, a spokesperson for the Seattle Department of Construction and Inspections, in an email.

Stevens said “normal maintenance and repair” of such homes are exempt from the city’s shoreline permitting process. But certain fixes — such as replacing a hull — are considered so extensive that they would, in fact, require a more involved permit, he said.

Although Pedersen's new legislation was drafted with Seattle officials in mind, Stevens declined to comment directly on the proposal.

The measure, Senate Bill 6027, passed the state Senate last week 46-0. It is scheduled for a hearing next week before the House Committee on Environment and Energy.

Republicans, too, spoke in support of the bill when it came up on the Senate floor. Sen. Judy Warnick, R-Moses Lake, said she shares Pedersen’s desire to help his constituents “get out from underneath the bureaucratic nightmare” being imposed by the city of Seattle.

“People want to live ... the way they’ve lived,” agreed state Sen. Curtis King, R-Yakima, in urging his colleagues to support the measure. “... It should apply to a lot of people in this state.”

In addition to responding to the city of Seattle, SB 6027 aims to reduce lease fees that the state Department of Natural Resources charges for floating on-water residences. Because of how the state classifies such homes, marinas that host them on state-managed waters are charged higher fees than for many other types of boats. As marinas have renewed their leases in recent years, some owners of floating on-water residences said their moorage fees have skyrocketed by thousands of dollars annually.

Joe Smillie, a spokesperson for the state Department of Natural Resources, said the department is supporting the latest version of Pedersen’s bill after negotiating some small changes and talking to some of the affected homeowners.

He said the agency understands the significance of houseboats to waterfront communities like Seattle, and is willing to take steps to help them stay.

“This is really a part of the culture of the city and the lake,” Smillie said.