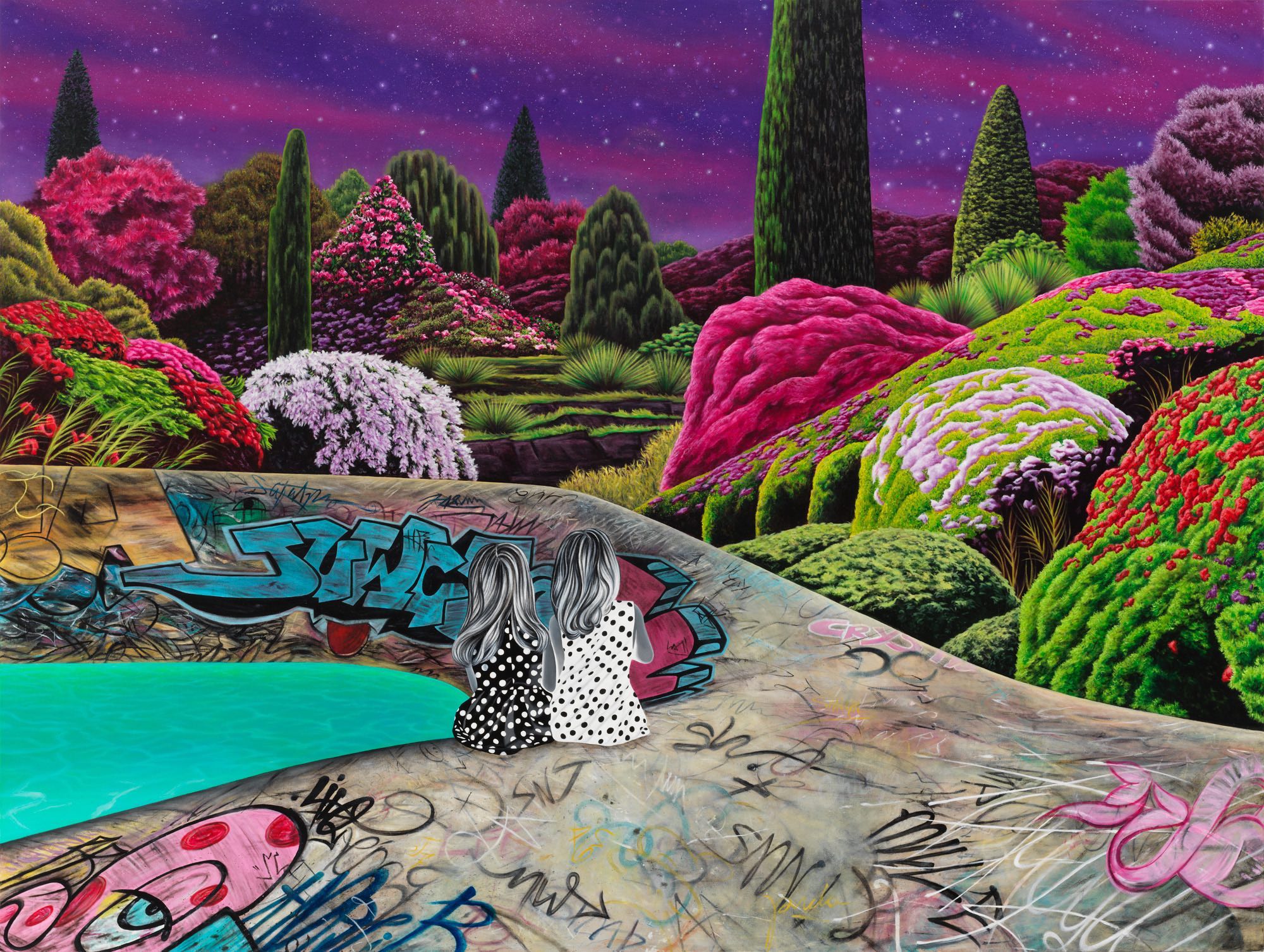 ‘Reflection,’ an oil painting by Nicole Gordon, is on view now at Bellevue Arts Museum. It marks the first time the Chicago-based artist shows her jarring, pop-surrealist work in the Pacific Northwest. (Nicole Gordon)

And a couple (get it?) art shows are getting in on the action. At Deep Affection: A Multimedia Anti-Valentine's Day Art Show (at Artspace Hiawatha Lofts), artists consider a new paradigm of “love that defies the patriarchy,” with the help of a tintype portrait booth, comedy, dance performances, videos and visual artwork by more than 20 artists. On Valentine’s Eve, Capitol Hill gallery The Factory gets the waterworks flowing with Big Little Cry, a multimedia group art show and performance night about “loneliness & love lost, break ups & break-downs, gloominess & grieving, sadness & sobbing.” Yes, there is a Cry Corner (with free tissues), but as The Factory’s Timothy Rysdyke says: “Come for the heartbreak, stay for the breakthroughs.” –M.V.S.

February is dark and so are its cinematic offerings. SIFF is kicking off its annual Noir City series, this time with a focus on classic films made outside the U.S., including: The Black Vampire (a proto-feminist Argentine thriller); The Finger Man (a French take on stool pigeons); and A Woman’s Face (from Sweden, in which a disfigured female gang boss is played by Ingrid Bergman!). >> As part of the quarterly Something Strange series, Northwest Film Forum is screening Blood Quantum (Feb. 19), a Canadian zombie apocalypse film in which the only people immune to the virus are Indigenous. This very clever premise has a supergross trailer, if you like that sort of thing. >> And miraculous video-rental holdout Scarecrow Video is screening a series of classic horror films as part of The Art in Horror series, with discussions led by local movie guru Robert Horton (Frankenstein, Feb. 15; Vampyr, Feb. 22; continues weekly through April 11, free). Bonus: When you emerge from all this darkness, it might just feel like spring. –B.D.

In 2008, choreographer and modern dance teaching artist Eva Stone (who directs Pacific Northwest Ballet's program for young female choreographers) felt she had to do something. She had grown tired that no one (besides other dancers) had any idea what she did for a living. Plus, “at that time there were only two general ways to engage with dance in Seattle,” Stone explains: On one side there was the classical ballet of the Pacific Northwest Ballet; on the other were the cutting edge experiments at On the Boards. “There was nothing in the middle,” Stone says. So she took it on herself “to start inviting people into our world” and founded a contemporary dance festival for dance connoisseurs and novices alike: Chop Shop, now in its 13th year.

This year’s lineup includes world premieres, such as the sensual duet "Like Those Playground Kids at Midnight," by New York City-based choreographer Omar Román De Jesús, plus other creations never performed in Seattle, as well as brand-new choreography by local dance legend Donald Byrd. “We want our audiences to be moved, to be challenged,” Stone says, “and leave the theater a bit different from how they came in.” –M.V.S.

It’s Black History Month, and while the Crosscut culture team would argue for celebrating Black artists year-round, this week offers ample occasions for paying tribute. Among them: an expansive show of work by legendary artist and former University of Washington professor Jacob Lawrence at Greg Kucera Gallery (through Feb. 29). Some 50 paintings, drawings and prints reveal the visual genius of the man who so vividly documented the African American experience. /// Speaking of Jacob Lawrence, the UW gallery named in his honor has a new exhibit by New-York based multimedia artist Marisa Williamson. With Angel of History (through Feb. 28) and The Runaway, a concurrent show at SOIL Gallery (through Feb. 29), Williamson places herself within African American history, whether dressed in whiteface as Thomas Jefferson or as an enslaved woman scrubbing floors in the master’s home. /// The Northwest African American Museum has two shows of work by contemporary Seattle artists: Iconic Black Women: Ain’t I a Woman (through Mar. 15), featuring painter Hiawatha D.’s modernist portraits, from Sojourner Truth to Michelle Obama; and Algorithm: Archetype, minimalist vessels by ceramist Christopher Shaw (through March 5). /// And in performance, Seattle Symphony Orchestra offers its take on The Best of Quincy Jones, with guest vocalists joining the orchestra to play the biggest hits by the towering pop producer (Benaroya Hall, Feb. 14-17, Jones won't be in attendance, sadly). /// Finally, beloved local choreographer Dani Tirrell restages Black Bois, featuring a flock of fierce local dancers expressing what it’s like to be a Black body moving through the world (Moore Theatre, Feb. 14, 7:30 p.m.). –B.D.

If you go: see links embedded above.

Think it’s a pain to bring water bottles on a hike? Try lugging a flatbed scanner. That’s the tool of Seattle photographer Melinda Hurst Frye’s trade, as she documents the living, breathing, crawling connections within nature. Her technique — scanning the ground, while keeping the scanner as clean and dry as possible — renders a high-res, painterly and strangely intimate view of Northwest flora, highlighting rich brown soil, branching plant roots and sometimes worms midsquirm. For the series, Picturing Trails, Frye’s work is joined by that of another local photographer, Jenny Riffle. The latter takes a wider view of our mossy environs, sometimes at a remove that gives a sense that someone is watching, perhaps hidden in a nearby copse. Both artists gathered these new images along the King County Regional Trails System. In doing so both reveal the particular magic and mystery of the Pacific Northwest landscape. –B.D.

If you go: Picturing Trails at Gallery 4Culture, through Feb. 27 (Free)

Nathan Vass: What Bus Lines Tell Us About Seattle

Metro Bus Route 7, which runs from North Seattle to South Seattle, is Nathan Vass’s route. A local artist, photographer and author, Vass is a night shift driver on the route — one of the city’s busiest, which also has the highest rate of safety threats. He’s been a Route 7 driver for the past seven years, and says it feeds his creativity as much as his artistic pursuits. In his blog, The View From Nathan’s Bus, he has written over the years about the riders who tend to get overlooked in our fast-growing city. Now those stories have been gathered into a book, The Lines That Make Us: Stories From Nathan’s Bus — nominated for a Washington State Book Award in 2019. His writing is frank, and the empathy he has for his riders is palpable. During this History Café appearance at the Museum of History and Industry, Vass will share thoughts about his experience as a bus driver, as well as stories, new and old, about Route 7 riders. In one blog post titled “Poker Face Practice,” he recalls offering a rider a cupcake and receiving an unexpected counteroffer. The situation could have ended in embarrassment, but Vass kept it polite with his new suitor and replied, “You know, that's nice of you to say, but uh, what I have to offer is simply. The cupcake.” –A.P.F.

Are you suffering from low-grade solastalgia, the emotional or existential pain caused by the thought of catastrophic climate change? A new show of video artworks by up-and-coming international art star Agnieszka Polska won’t exactly erase fears of environmental collapse — the works deal with climate disaster and mass extinction — but might just calm you down enough to ponder ways to manage your eco-anxiety. In her videos, the Polish artist employs manipulated imagery, poetry and ASMR (a pleasant sense of tingling and relaxation created by certain sounds), as well as clues from emotional mimicry and body awareness meditation to take visitors on what she calls “melancholy journeys.” Ready to be mesmerized, comforted and frightened at the same time? It’s worth a try. –M.V.S.

Flashy teacups spin toward cracks in hardened lava as a blazing forest fire rages in the distance, ready to swallow all in its path. In Nicole Gordon’s apocalyptic oil painting “Who Left the Kettle On,” the world of teacup carnival rides, so it seems, has gone fully mad. Much of the Chicago-based artist’s work — being shown in the Northwest for the first time — takes a similar turn toward candy-colored dystopia. At Bellevue Arts Museum, Gordon’s jarring, pop-surrealist paintings come to life with accompaniment by sculptures and installations, lending the gallery halls her particular “abandoned skatepark” vibe. –M.V.S. 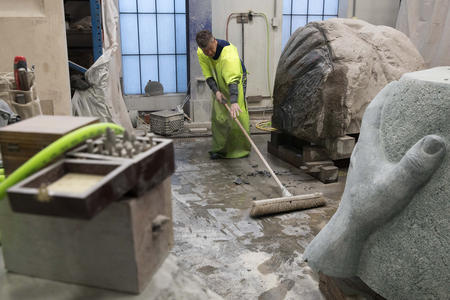