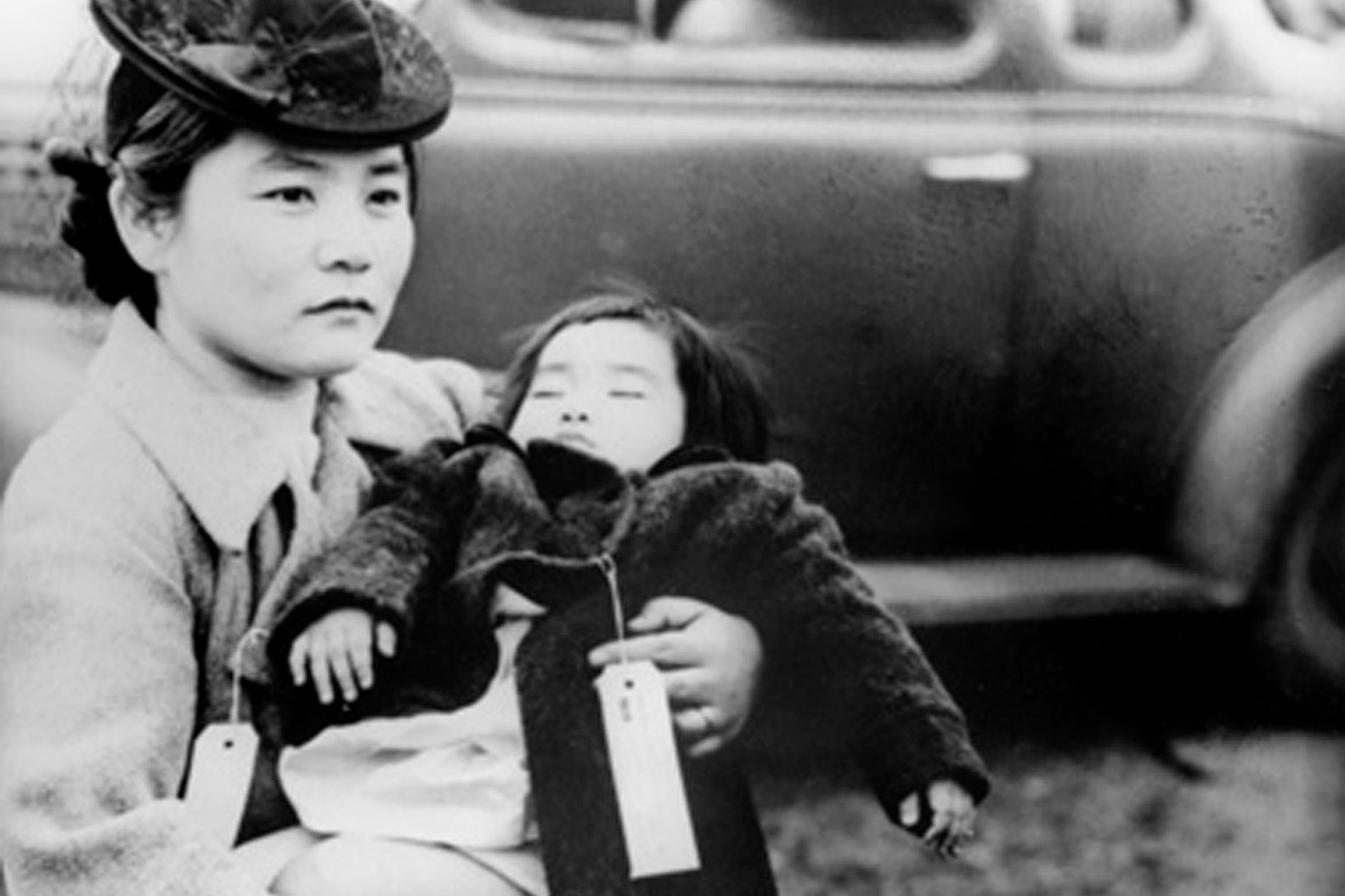 Fumiko Hayashida holds her daughter Natalie on Bainbridge Island, Wash., on March 30, 1942. Hayashida and her family were forcibly removed from their home on the island and sent to internment camps in California during the US effort to imprison Japanese American's following the bombing of Peral Harbor. (Smithsonian)

Doan Nguyen was sufficiently “worked up,” as she put it, by the time we reached Nihonmachi (Japantown) Alley, a history-filled thoroughfare in Seattle on the north side of Jackson Street, between Sixth and Maynard avenues. We were stopped in front of a cutout developed by the artist Erin Shigaki of a woman of Japanese descent carrying her young daughter while being forcibly removed from Bainbridge Island in 1942.

“This was much easier to say before I became a mother,” she said, regaining her composure, then continuing the story of another mother, Fumiko Hayashida.

Hayashida was the subject of the iconic photo before us. In it, she is carrying her sleeping 10-month-old daughter, Natalie. The very first people of Japanese descent who were taken to camps after the signing of Executive Order 9066 were from Bainbridge, and Hayashida was among them. The part of the story not told in the 1,000 words of this picture is that Hayashida, 31 at the time, was pregnant with her third child.

Motherhood connects Nguyen to the challenges Hayashida faced at the moment captured for posterity – mostly, keeping her children safe and thriving through future, unknown perils. She also relates with the late Japanese American activist through shared Asian heritage, something that occurred to her only recently. A second-generation Vietnamese American, Nguyen now is a senior tour manager at the Wing Luke Museum of the Asian Pacific American Experience.

Nguyen recently led me, along with Shaun Mejia, marketing manager at Wing Luke, on a walk along the Japanese American Remembrance Trail, an urban trail developed by the museum, the National Park Service and a bevy of neighborhood organizations to explore Seattle’s original Japantown. We made the journey in advance of Day of Remembrance, an annual observance of the Feb. 19, 1942, signing of Executive Order 9066 by President Franklin D. Roosevelt. The executive order cleared the way for the forced removal and incarceration of 120,000 people of Japanese descent, 62% of whom were U.S. citizens.

This particular Day of Remembrance represents a milestone, though not a numerical one (it is the 78th anniversary). It is a breakthrough because of the cultural and political forces coalescing around it. This is a time of Yang Gang, Marie Kondo and Crazy Rich Asians — a time when people of Asian descent are stepping out of the margins to which we have been confined or out from the closed, self-sustaining communities to which we retreated almost as soon as we arrived in this country.

Japanese Americans, removed, imprisoned and virtually erased during World War II, are no exception to this Asian reemergence. The times have called us. The wall-building, the family separation and the mass detention have called us. And the community is answering, standing on its moral authority as survivors of the U.S. concentration camps of World War II.

A murmur that began as support for profiled and banned Muslims has built to a national organization, Tsuru for Solidarity, which is strongly rooted in Seattle. Its first major action will be calling for the closure of the Northwest ICE Processing Center in Tacoma. In conjunction with Densho, the Seattle Japanese American Citizens League and La Resistencia, the demonstration will take place at the immigration detention center Sunday, Feb. 23, from 12:30 to 2:30 p.m. Tsuru for Solidarity will also stage a “National Pilgrimage to Close the Camps” in Washington, D.C., this summer.

To walk the Remembrance Trail is to experience the void from which this awakening has materialized. It is, in many ways, a trail of ghosts, a reminder of a Japantown, once vibrant, that was wiped away by the World War II mass incarceration. The erasure, though by different forces, continues even today. Last summer, Keiro Northwest, which started as a nursing home for aging camp survivors, closed after a nasty fight. From the KODA Condominiums to another high-rise ticketed for the building that houses the iconic Bush Garden, harbingers of displacement proliferate in the district.

Nguyen estimates that the some 250 businesses owned by Japanese Americans before the forced removals have dwindled to seven. As we departed a bustling, former Japanese American segment of Chinatown-International District, she noted the relative serenity of Main Street, which anchors the six square blocks that make up Japantown today. The day before our walk, I’d been in Little Tokyo in Los Angeles, which still bustles. During my trip to California, I visited the Japanese American National Museum, where the main exhibit, Transcendients: Heroes at the Borders, honors people who fight and advocate for those who face discrimination and inequality at borders, geographical and otherwise.

The exhibit includes a poem, “We came back for you,” by Satsuki Ina, the storied camp survivor, social activist, psychotherapist and writer who will speak at Sunday’s Day of Action in Tacoma. Her poem helps explain why Japanese Americans have answered the call of our country’s immigration crisis. It reads, in part:

Back in 1942, we disappeared.
Empty chairs in the classroom,
empty homes, shops and farms.
America turned their backs on us.
No one marched, no one protested,
there were no petitions, there was no outrage.

Ina’s point of connecting with other communities to “stop repeating history” is one that resonates with Nguyen. When the Japanese incarceration was taught at Sylvester Middle School in the Highline School District, she says she struggled to understand her own connection, as an Asian American, to the brutal history. Growing up in nearby Burien, she hadn’t even realized that Seattle had a Japantown.

Years later, Nguyen attended the University of Washington and majored in Asian American studies. Her parents counseled her, through a fairly typical Asian lens, “to leave the past in the past.” But she found common ground in the similar histories of Asian immigrant ethnic groups.

In 2010, Nguyen kept spying on posters around the city the familiar artwork of Roger Shimomura, touting his show, Yellow Terror, at Wing Luke. It drew her to the museum, and she hasn’t left. Now she helps tell the stories of past and present, of what’s lost and what remains to be counted and cherished. Her audience includes children from her old school district, as well as her 1½-year-old son. It all still brings tears to her eyes and a catch in her throat.

What eats at Doan Nguyen the most, she says, is the notion of “who gets to identify as American.”

The shifting basis for national identity is an experience that binds Japanese Americans, not only with other Asian immigrant groups, but with the spectrum of communities of color in the U.S. Day of Remembrance continues to serve as a poignant marker, not of how far we have come in equalizing the standards by which America embraces its various communities, but of how much farther we have to go.