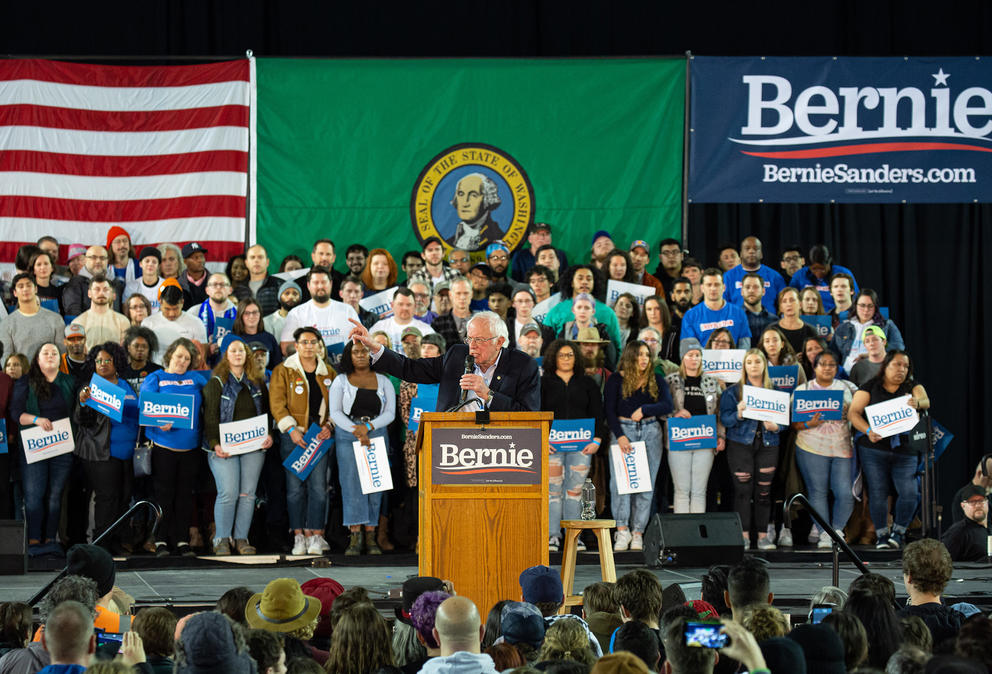 Democratic presidential candidate Sen. Bernie Sanders speaks during a campaign event at the Tacoma Dome in on Feb. 17, 2020. (David Ryder for Crosscut)

Sen. Bernie Sanders and “undecided” would be equally likely to win the Washington Democratic presidential primary if “undecided” were a choice on the ballot, according to results from a new Crosscut/Elway Poll conducted days before ballots were mailed.

While Sanders was the clear leader among the pool of Democratic candidates, slightly fewer people supported him than the number of undecideds, and the differences among the “second place” finishers were within the margin of error.

When the poll was conducted Feb. 15 to 18, 21% of people planning to vote in the March 10 Democratic presidential primary said they would vote for Sanders. About 22% were undecided, 15% said they were going to vote for former New York Mayor Michael Bloomberg, 11% for Sen. Elizabeth Warren, 11% for Sen. Amy Klobuchar, 10% for former Vice President Joe Biden, 9% for former South Bend, Indiana, Mayor Pete Buttigieg and 1% for U.S. Rep. Tulsi Gabbard. The poll has a 5% margin of error.

Despite the mushy nature of the top-line results, the poll offered deeper insights into how the 404 likely Democratic voters who participated in the poll felt about a general election contest between President Donald Trump and a Democratic nominee. Most — but not all — of those who supported Sanders, Bloomberg, Warren and the rest of the field said they would vote for whoever wins the Democratic nomination.

Among the least likely to support the eventual Democratic candidate were Sanders voters, 21% of whom said they may vote for a non-Democrat or not vote in November if they don’t like the party’s choice. In contrast, 98% of Warren's supporters said they would vote for whichever Democrat runs against Trump.

These numbers are fluid, pollster Stuart Elway acknowledged, and already substantially changed from a similar poll by KING 5 a few weeks earlier, which had Joe Biden in second place and Warren in third. In both polls, Sanders remained the man to beat.

Brittany Hammond, an independent from Vancouver, Washington, who took part in the poll and who leans heavily toward Democrats, said she is all-in for Sanders because she believes he is one of the few politicians who works hard for the people. Hammond, a 43-year-old entrepreneur, said she has followed Sanders for at least 15 years, and she and her dog marched for the candidate in Seattle four years ago. 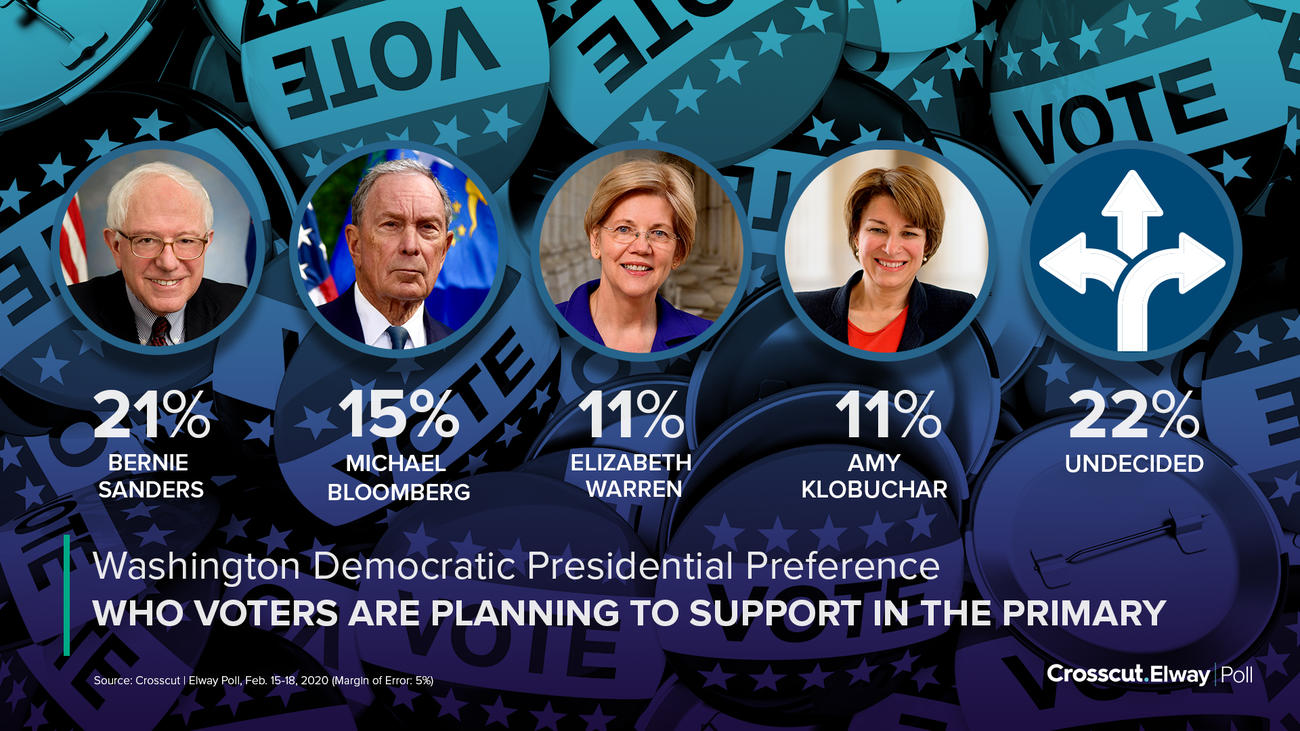 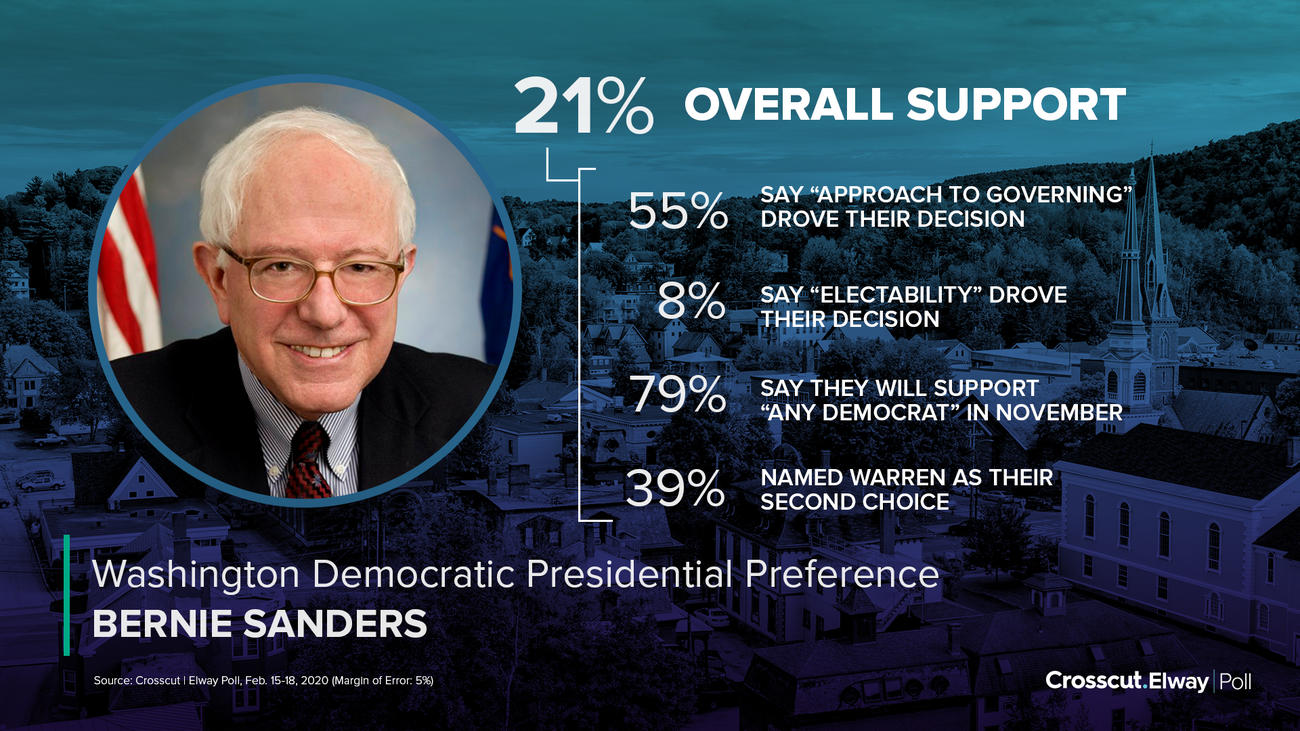 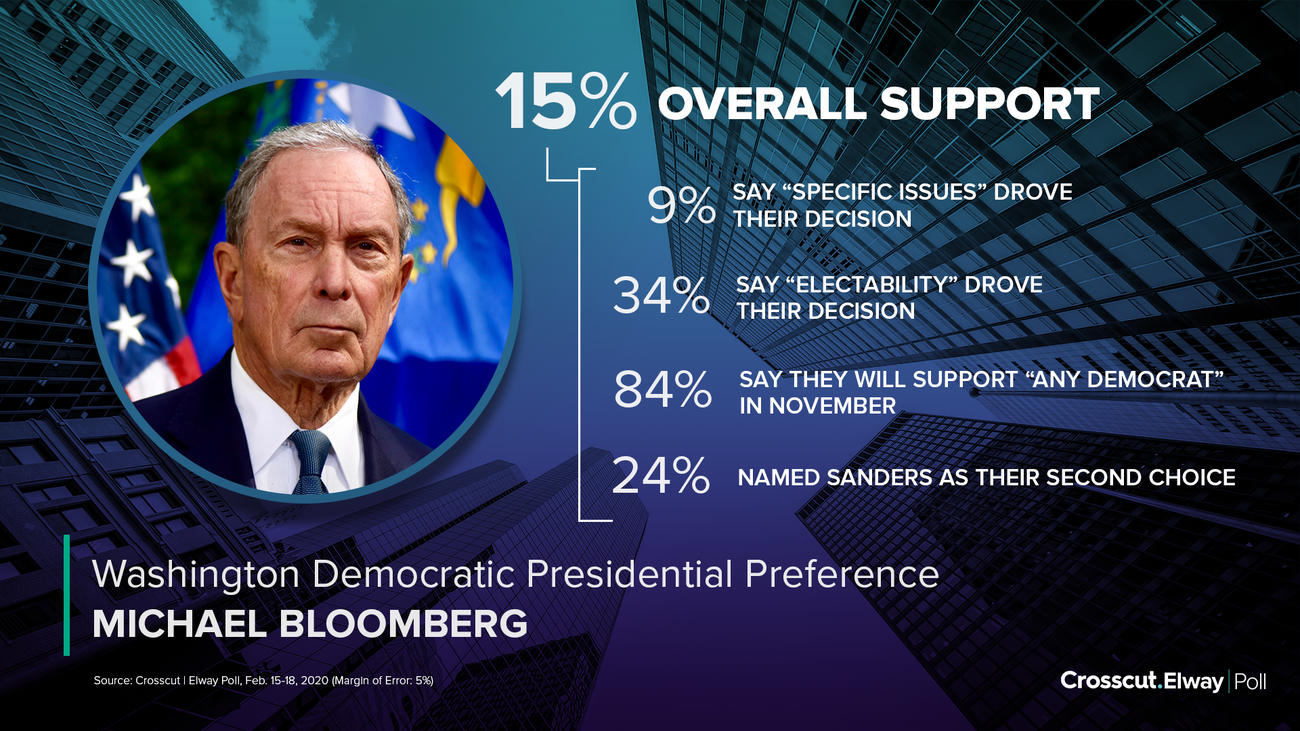 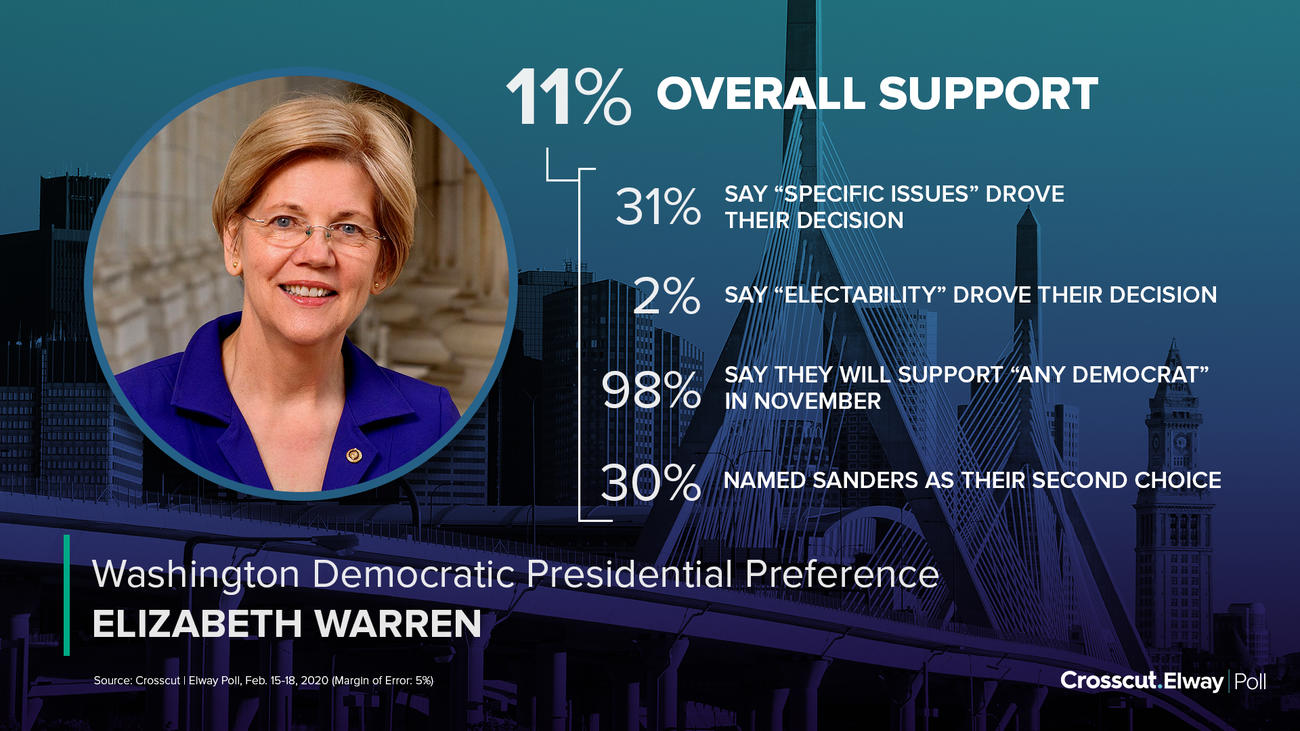 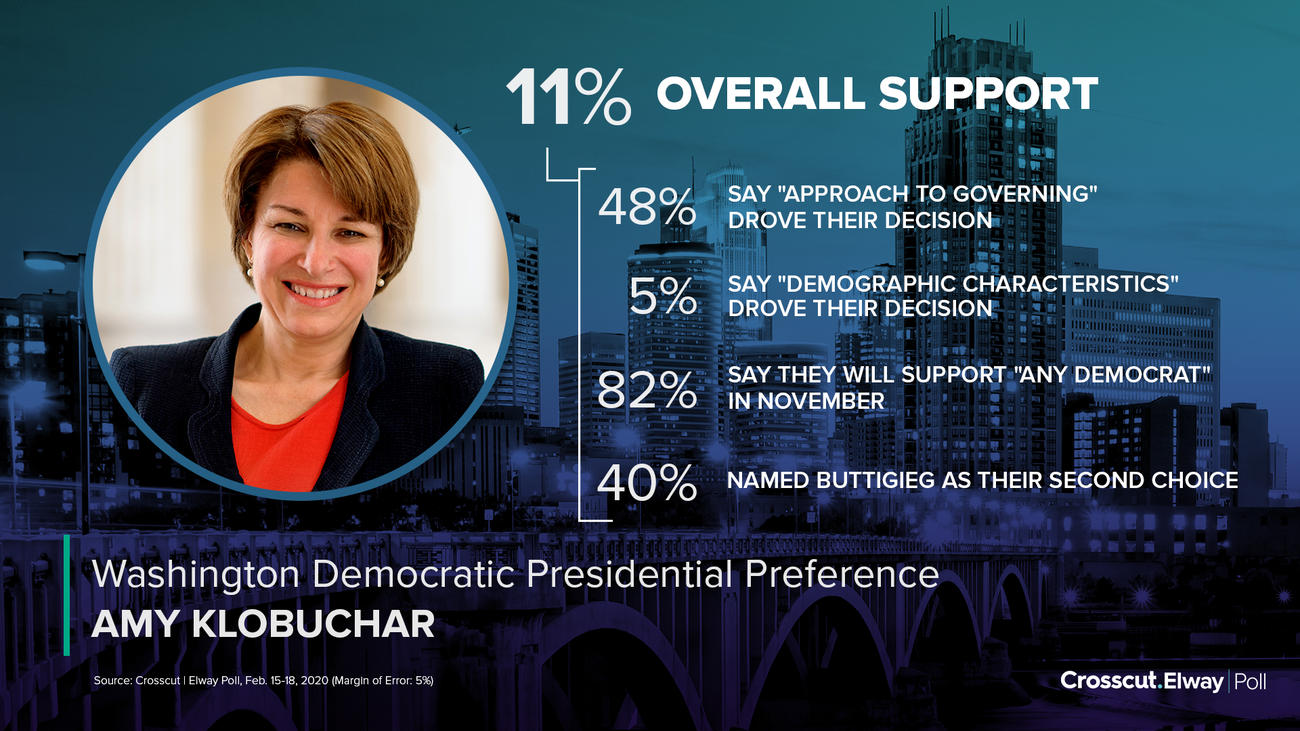 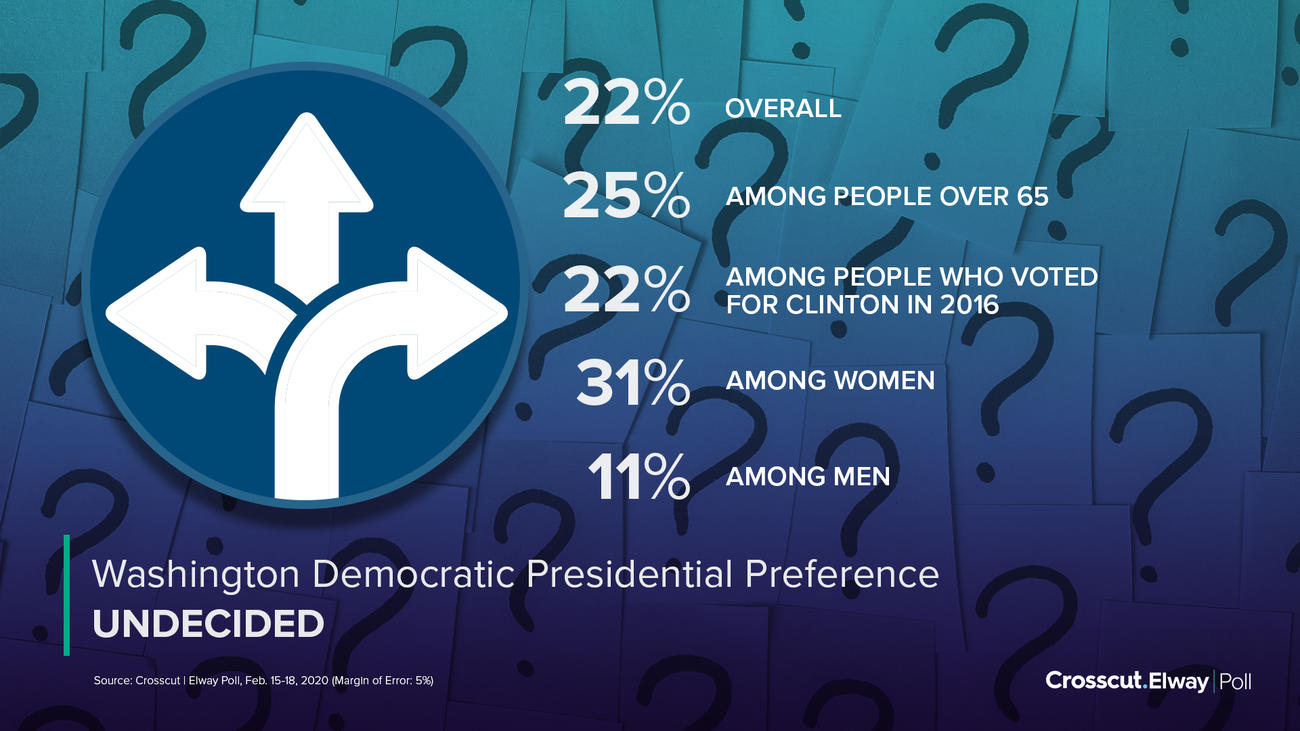 Hammond “very reluctantly” voted for Hillary Clinton in the 2016 general election but said she wouldn’t make the same compromise this November if she senses the nomination is unfairly taken from Sanders, as she did four years ago. Many Sanders supporters believe Clinton’s close ties to the Democratic National Committee enabled her to push the nomination in her direction in 2016. Hammond said she is keeping a close eye this time around to make sure the nomination process is fair.

When asked if she would vote for Trump, Hammond said, “Oh God, no.” But she added that she wouldn’t be reluctant about voting for a third-party candidate in November.

“I know if many people don’t follow the Democrat, he [Trump] will probably be reelected. But that may have to happen for our voices to be heard,” Hammond said.

The Crosscut/Elway Poll was conducted before the candidates' Las Vegas and South Carolina debates, as well as before several primaries scheduled in advance of when Washington voters must return their ballots, on March 10. Because of that, Elway acknowledged, “There’s plenty of room there for this to all change.”

“This thing is real fluid, as we knew before anyone took the poll,” he added.

Elway pointed out a number of interesting findings in the poll results, including:

Diane Hirt, an undecided voter from Snoqualmie, said she has favorites in the Democratic race, but is waiting to see who drops out before she votes.

Although the 57-year-old acknowledged that she isn't a big Sanders fan — she leans toward Buttigieg, Warren and Andrew Yang, who dropped out of the race — she plans to vote for whoever the Democrats nominate.

“I’m worried that if Bernie wins, we’ll probably have Trump again,” said Hirt, who thinks either Buttigieg or Klobuchar would be better at standing up to Trump.

“It’s really a hard bag to pick from,” she added.

Come talk about the presidential primary 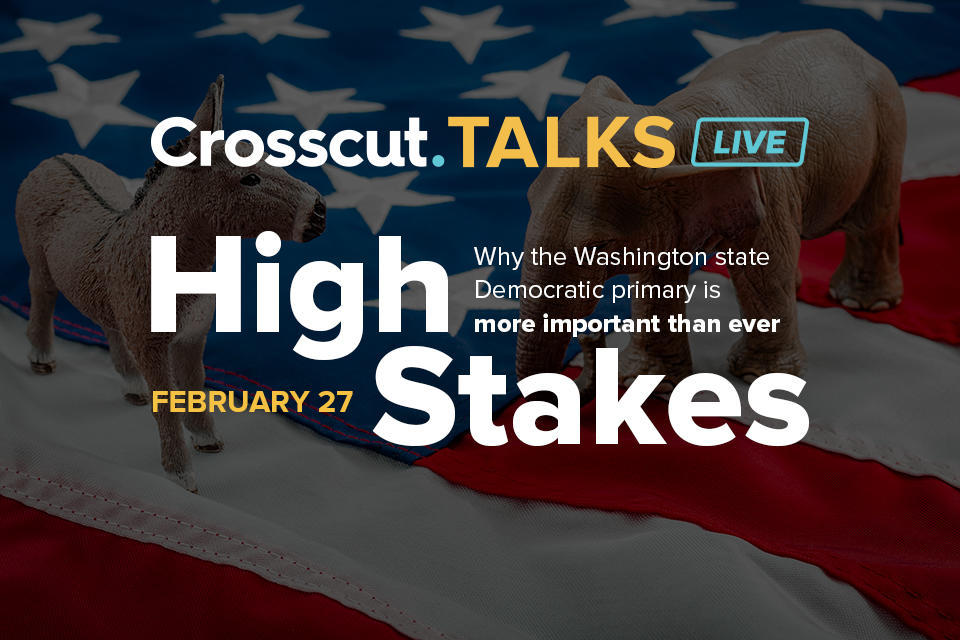 There is a lot at stake in the 2020 presidential election, and this year Washington state moved its primaries up to give its voters more voice in the nominating process. Join us for our latest Crosscut Talks Live panel with political experts to talk about what's ahead on Thursday, Feb. 27 at 6 p.m. Get your tickets and more information here.
Article continues below 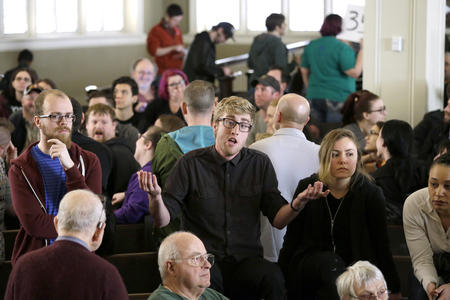 by / February 4 /
Article continues below

Why the climate package from Washington state Democrats falls short

Two bills before the state Legislature impose new costs and bureaucracies without reducing emissions all that much.