Bipartisan proposals before the Washington Legislature would help scientists learn about storing carbon in agricultural soils and invest in GPS-guided tractors and climate-friendly cattle feed. 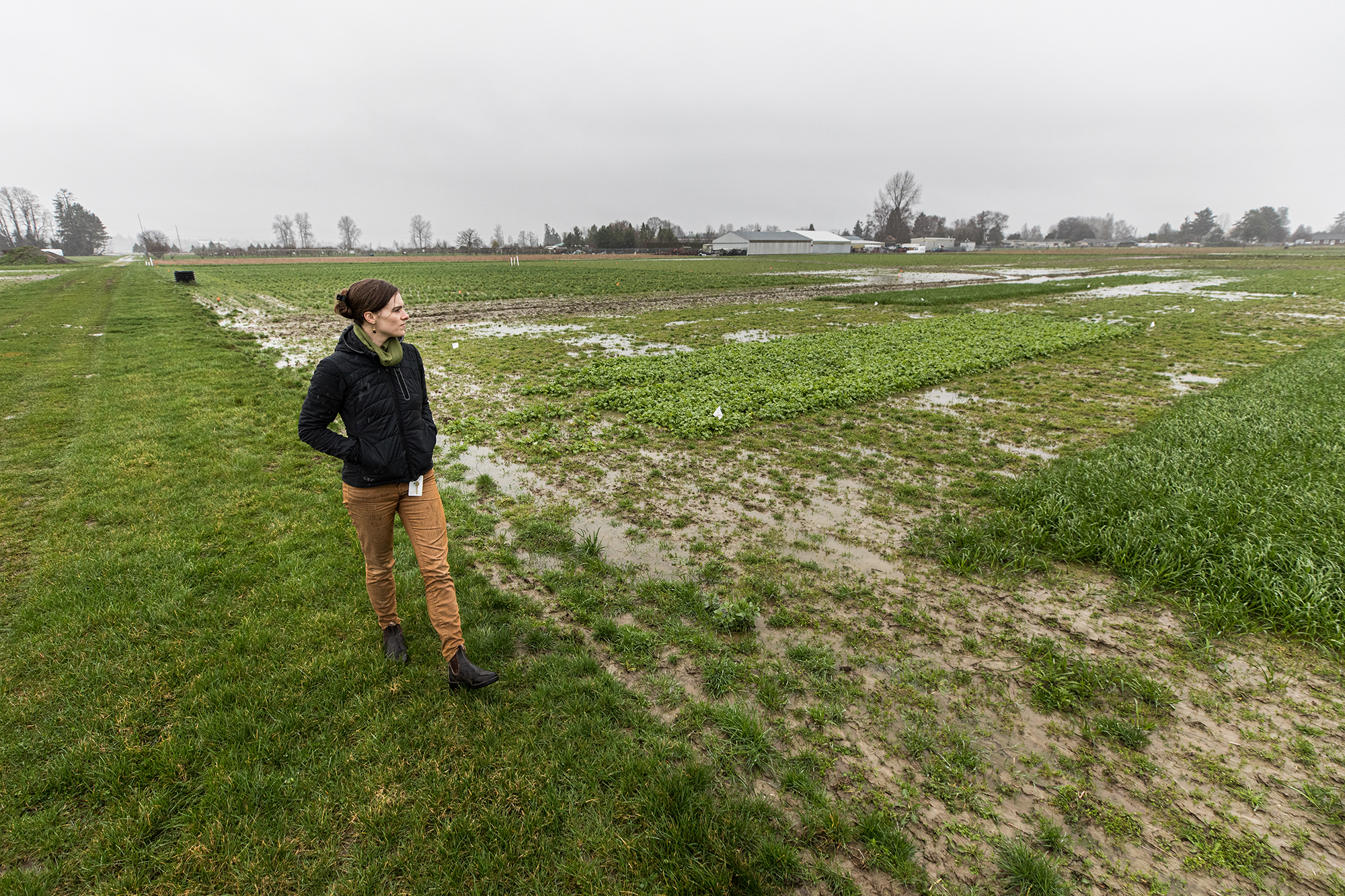 Water was starting to pond on Skagit Valley fields when three soil experts recently ventured out to inspect test plots of scraggly winter cover crops of mustard, clover and rye. The fields are part of a Washington State University research project working to unravel the mysteries of soil health and figure out how farmers could help slow global warming by capturing carbon in the soil.

Carbon sequestration through agriculture is a science that has advanced exponentially in recent years, and promises healthier crops raised with fewer chemicals, using practices that build carbon-rich organic matter in the soil. These Skagit Valley test plots are part of a larger research station on 183 acres.

“Soil management strategies are among the most economic approaches to dealing with greenhouse gases,” said Chad Kruger, director of WSU’s Center for Sustaining Agriculture and Natural Resources. At its Mount Vernon campus, WSU runs more than two dozen active experiments at any one time.

Agriculture and deforestation are responsible for nearly a quarter of global emissions of greenhouse gases, which are unnaturally warming the planet. Washington lawmakers this year are considering two bills to boost climate-fighting efforts on the state’s farms. The legislation would pay for additional soil research and give grants to farmers who try new methods to sequester carbon or cut greenhouse gas emissions.

They reflect the recognition that farm soil can play a starring role in slowing the the rise of greenhouse gases. Farmers who build up soil organic matter — the compostlike residue left over from leaves, stems and roots of decaying plants — are helping to trap carbon in the soil. These methods are often called carbon farming, or regenerative agriculture.

“We need to be doing more to allow the landscape to absorb carbon we’ve already emitted into the atmosphere,” said Adam Maxwell, head of government relations at Audubon Washington, an environmental group. “And farming, when done really well, is really good at pulling carbon out of the atmosphere into soils that are healthy.”

The sustainable farms and fields bill, Senate Bill 5947, would provide $1 million in 2020-21 to launch a grant program supporting practices aimed at carbon sequestering and reducing greenhouse gases. Supporters hope those funds would double or triple in the years to come.

And it’s as bipartisan as a bill gets these days in Olympia. It's sponsored by Democrats and Republicans and endorsed by both environmentalists and dozens of farmers, including fruit growers, dairy and wheat farmers and cattle ranchers.

“It’s voluntary, it’s not mandatory, so for those agriculture folks that would like to test the waters on carbon, this’ll help them do that,” said the bill’s prime sponsor, state Rep. John McCoy, D-Tulalip, during a recent hearing on the bill. 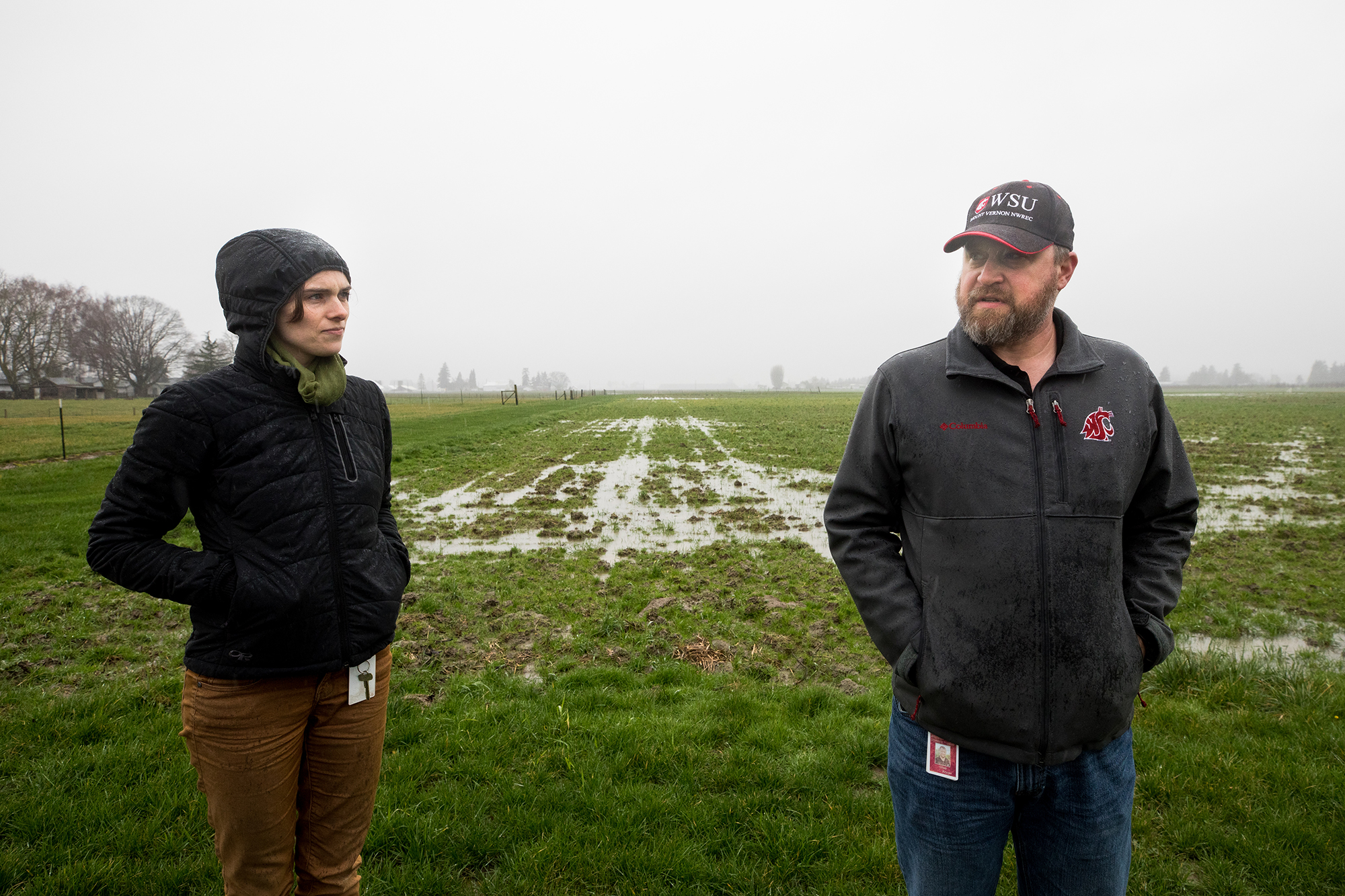 Another bill, the Washington Soil Health Initiative, House Bill 6306, would create a healthy soils research program and, if funded at the requested amount, would provide more than $1 million in 2020-21 and $2.6 million per biennium after that for research. It passed the Senate on Monday and was sent to a House committee.

Although bipartisan support bodes well for passage of the bills, the question is whether they will be funded, and if that will be enough to get the projects started.

Interest in changing farming practices comes on the heels of last August’s report by the Intergovernmental Panel on Climate Change, which called for a transformation in the way the world produces food. The panel’s special report on land use and its contributions to global warming said agriculture, deforestation and other land uses accounted for about 23% of greenhouse gas emissions. If packaging and transportation were factored in, food production alone was the source of as much as 37% of emissions, the IPCC said.

Farming is contributing to global warming, but it’s also threatened by it. More intensive flooding and longer droughts have the potential to cause worldwide food shortages, the IPPC warned.

Agriculture accounts for 12% of Washington’s economy and generates $10.6 billion in revenue annually. But this state can be a challenging place to grow food because of low amounts of carbon in native soils, said Kruger, who is also the Western Washington director of WSU’s Center for Sustaining Agriculture and Natural Resources.

Many scientists believe the world’s intensively cultivated soils have lost between 50% and 70% of their carbon stocks — carbon that has been combined with oxygen in the air to become carbon dioxide, the most abundant greenhouse gas. But agricultural soil can also be a sink for carbon, if farming is done differently.

David Montgomery, a University of Washington geology professor who has written extensively about soil erosion, believes the degradation of soil and the loss of organic matter are the most underappreciated crises humanity now faces.

Montgomery visited farms around the world for his most recent book, Growing a Revolution: Bringing Our Soil Back to Life.” He described the long-term environmental damage caused by plowing, pesticides and fertilizers. Montgomery and others who have studied the issue say three practices are key: cutting back on plowing the soil, using cover crops to return organic matter to the soil and rotating crops.

Many farmers could use financial help to transition to a different way of farming, he said in an interview last year. “Farmers who have gone all in — once they start doing it and seeing the results, they’re not inclined to go back,” he said. 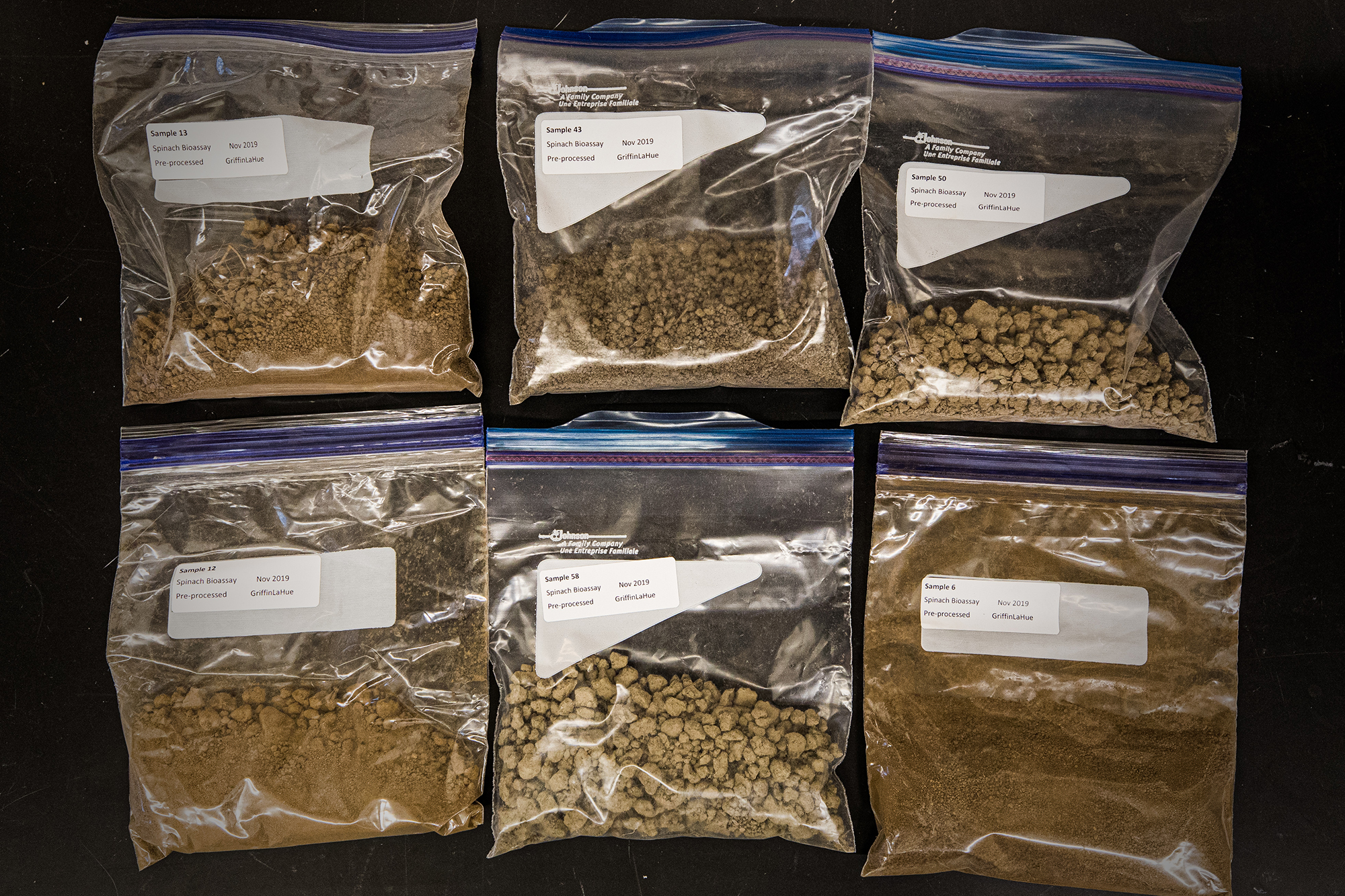 The sustainable farms and fields bill offers farmers grants for three types of practices, said Greg Rock, policy committee chair of Carbon Washington, a nonprofit environmental group that has campaigned for a carbon tax in the past:

It’s the second go-round in the Legislature for SB 5947, which passed the Senate last year but failed in the House. It is scheduled for a vote Friday in the House Rural Development, Agriculture & Natural Resources Committee.

Many of these practices are already being used on the farm, growers testified in that committee earlier this month. For example, cover crops protect and enrich the soil between growing seasons.

Grants could even be used to solve the problem of methane emissions from belching, farting dairy cows. Grants could help pay for feed additives like kelp and biochar — a charcoal-like substance made by burning organic matter — to reduce the cows’ emissions, said Washington farmer Jay Gordon, policy director of the Washington State Dairy Federation and a dairy farmer himself.

The grants could also be used to obtain new equipment, such as GPS systems that allow a farmer to make fewer and more precise passes across his or her field with a tractor, cutting diesel fuel emissions, Rock said.

Jim Baird, a fourth-generation farmer from the Columbia Basin, said he has been growing cover crops for 30 years on the family-owned Baird Orchards, and he has seen their value. But the seed can be expensive.

The bill “would go a long ways to encouraging and facilitating cover crops and other practices that will help build soil health that helps sequester carbon, and makes farming more profitable long-term,” he told the committee.

The bill has its detractors. Joanna Grist, a lobbyist for PCC Community Markets told the committee that organic farmers fear the bill is written to benefit large-scale, mechanized growers. Jim Jesernig, a lobbyist for the Washington State Potato Commission and former director of the state Department of Agriculture, said the bill could take money away from existing conservation programs, which are already underfunded.

In the past 10 years, researchers have grown increasingly aware of the importance of microbes and fungi in the soil, and how promoting soil health can boost yields and reduce the need for chemicals. Creating a soil health initiative could help further that work.

“We know there’s a whole lot going on in the soil system that can’t be explained by traditional soil chemistry and physics,” said WSU's Kruger. Advances in molecular biology and plant genomics have helped scientists better understand the role soil plays, he said.

For example, consider the mustard green, a cover crop. Mustard sequesters carbon in the soil after it’s tilled in, adding carbon-rich organic matter, and chemicals in the plant also suppress pathogens. If a Washington farmer plants a field of mustard greens before planting potatoes, the potato plants will usually be healthier and less prone to disease.

Usually — but not always. Sometimes growing mustard greens seems to have no effect, Kruger said, and other times, potatoes do worse in a field where mustard greens grow. A farmer who grows mustard greens is taking a gamble.

Farmers need soil scientists to tease out the relationship between soil biology and crop performance, and help them decide which practices give the best return on investment — such as when and where to plant mustard greens and when to chop them into the soil, Kruger said.

The proposed Washington Soil Health Initiative would be run in concert with the Department of Agriculture and the Washington State Conservation Commission.

In the Skagit Valley, the WSU station is growing mustards and other cover crops over four years to see if they have a cumulative effect on the soil, said Deirdre Griffin LaHue, assistant professor of soil quality and sustainable soil at WSU.

In the laboratory, Griffin LaHue and other soil scientists extract DNA from soil to see what types of microbes live there and measure their respiration. Toby Una, a graduate student, is experimenting with new tests that can quickly tell farmers how much carbon is in their soil.

Skagit Valley is best-known for its tulips, but some of the most high-value crops grown here are fresh yellow and red potatoes, along with commercial seed for spinach, cabbage and beets. It’s a challenging place to farm because of winter flooding, and the warmer, drier summers likely resulting from climate change have driven some farmers to buy irrigation equipment, Kruger said.

Even the migratory bird life — overwintering trumpeter and tundra swans, snow geese and ducks — make farming here a little more difficult, because the birds pull up cover crops and trample the fields when the wet soil is at its most vulnerable.

The Mount Vernon station held a listening session last year with Skagit farmers, and found that “they really are paying attention to the soil, and climate-related challenges,” Griffin LaHue said. But with hundreds of soil types and 300 different commodities grown around the state, “there’s no one-size-fits-all solution” to building up carbon in the soil, she said.