Three proposals in the state Legislature seek to help those with past convictions volunteer in schools, clear their records and earn their right to vote back faster. 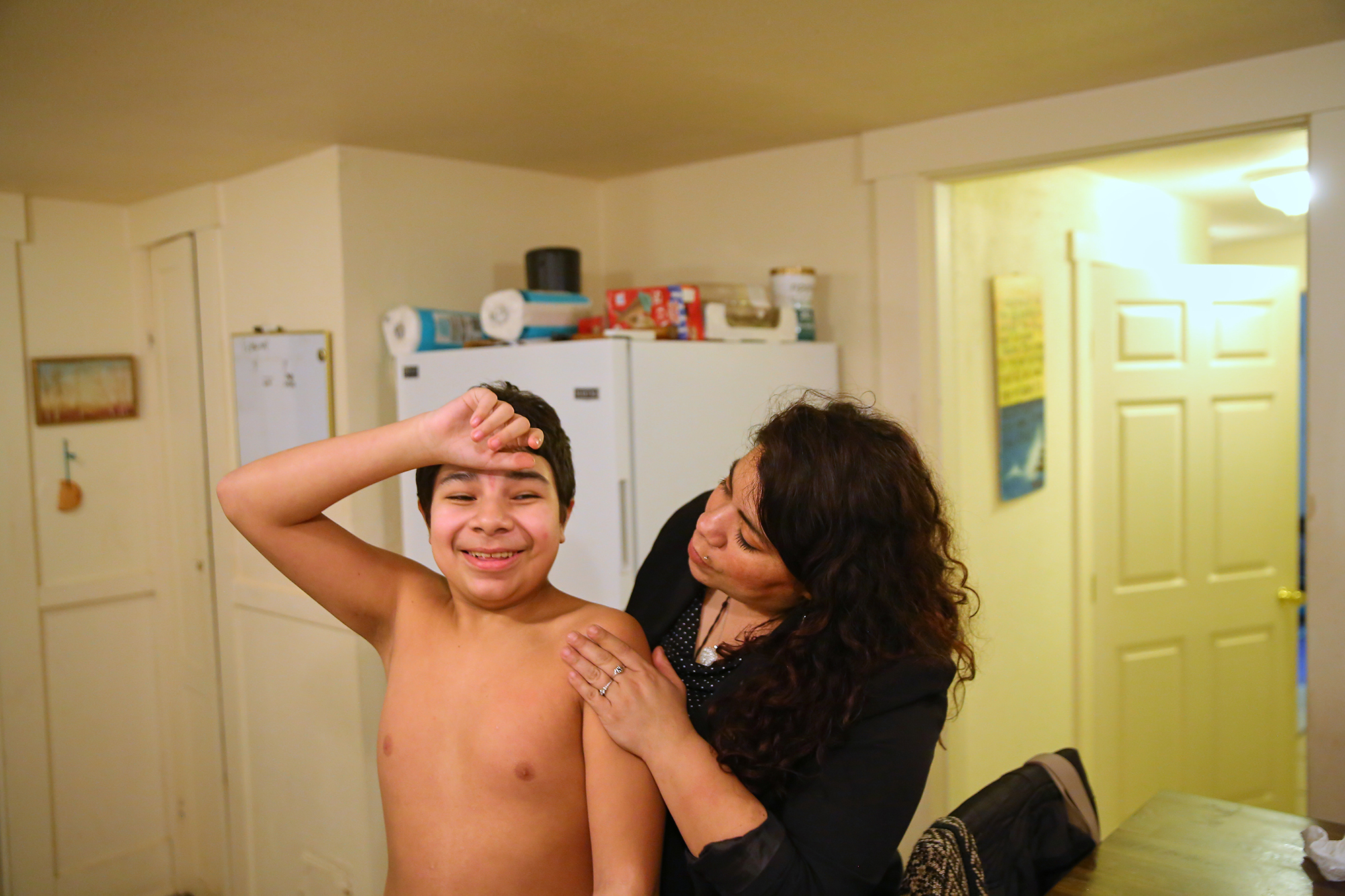 Carolina Landa talks with her son Zach, 12, in the kitchen of their home in Olympia, Feb. 5, 2020. Zach is on the autism spectrum, nonverbal and requires extra help from Landa and other caretakers on everyday tasks. Landa advocates a bill, currently under consideration in the state Legislature, that would allow her to volunteer at her son's school and vote, despite a past felony drug conviction. (Genna Martin for Crosscut)

It is estimated that one in every three Americans has a criminal record. For some, that record can be a barrier to employment, housing and even volunteering. But that could change soon in Washington state if any of three proposals before the state Legislature are approved.

Carolina Landa has personally encountered these barriers. The 38-year-old government employee and graduate student at The Evergreen State College has a past conviction still on her record after nearly a decade. One of the most difficult challenges has been roadblocks to volunteering at her son’s school. Zach, 12, is autistic.

“Special needs parenting is a different kind of parenting,” Landa said. “It demands you to be thinking 24/7 of how you’re going to adjust the situation.” She said that discriminatory practices against those with criminal convictions add extra barriers to her own situation.

After her incarceration, Landa said she initially struggled to find housing. Being prevented from volunteering or even visiting Zach’s school was especially problematic, she said, because his teachers have reported behaviors she said she is unfamiliar with. Landa said she could gain more understanding of what is happening if she were allowed to be in the classroom. For now, teachers write daily notes to Carolina in a binder that Zach brings home from school.

Despite her own success as a college graduate, followed by her acceptance to grad school, Landa said she and many others are still held back by their past mistakes — even years later.

Now, the Legislature is considering three proposals to remove some of those barriers. They would help Washingtonians regain voting rights, get a path toward volunteering after incarceration and clear their records. 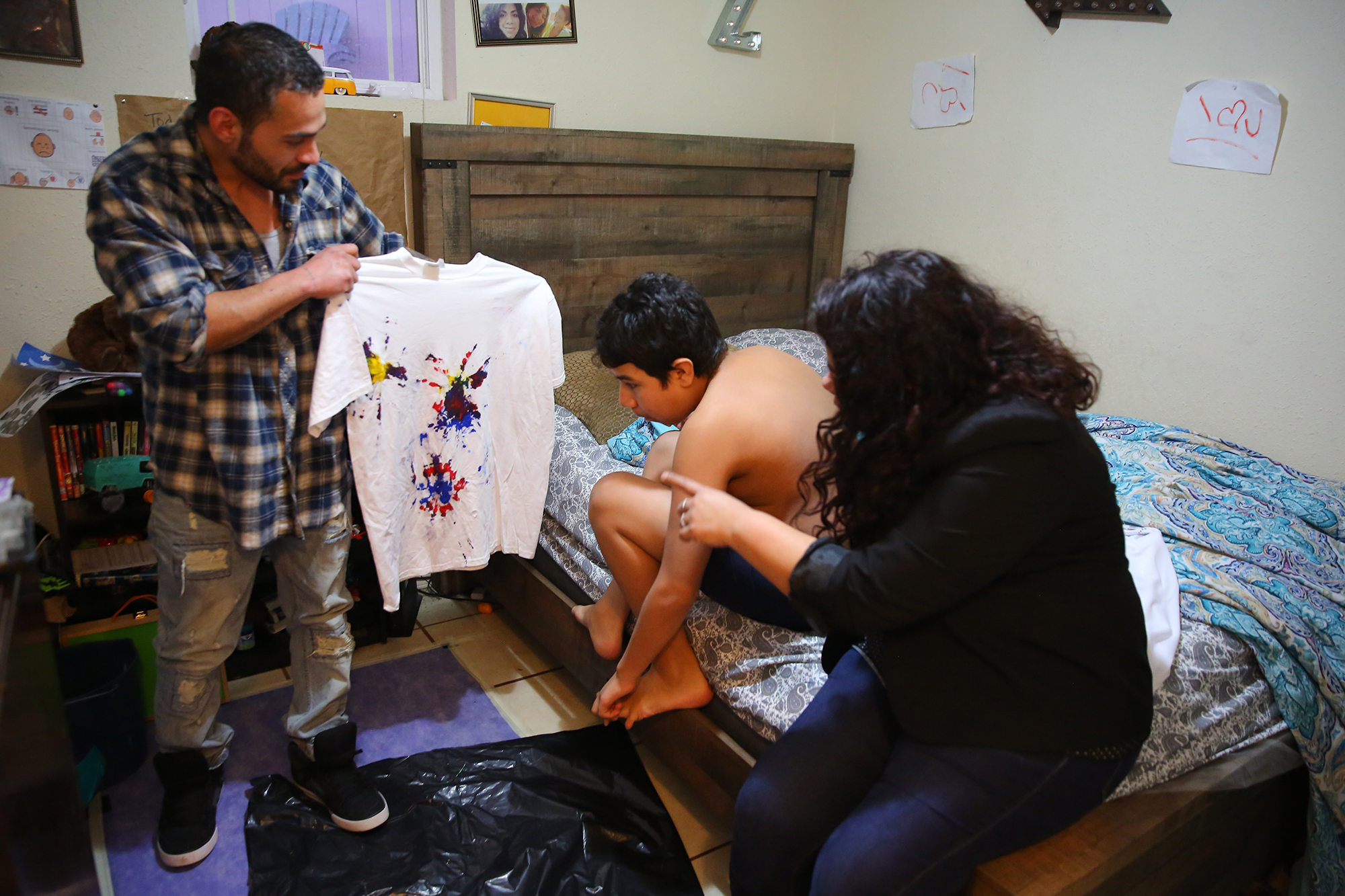 Carolina Landa sits on the bed while her partner, Moises Vargas, holds up a T-shirt as he teaches Landa's son Zach, 12, how to tie-dye at their home in Olympia, Feb. 5, 2020. (Genna Martin for Crosscut)

Carolina Landa sits on the bed while her partner, Moises Vargas, holds up a T-shirt as he teaches Landa's son Zach, 12, how to tie-dye at their home in Olympia, Feb. 5, 2020. (Genna Martin for Crosscut)

One bill, sponsored by state Rep. Laurie Dolan, D-Olympia, attempts to create a more streamlined process for parents with past convictions to apply to volunteer at their kids’ schools. Dolan said she was inspired to help draft House Bill 2220 when she heard stories from parents with criminal records who were desperate to participate more in their children’s lives.

The bill establishes volunteer application requirements for schools that are designed to ensure parents with certain criminal convictions must at least receive fair consideration to volunteer there.

Tarra Simmons is a lawyer and the director of the Civil Survival Project, an advocacy group for criminal justice reform. Simmons, who has a past criminal conviction, won the right to take the state bar exam after the Washington Supreme Court ruled in her favor in 2017. She is also running for the state Legislature in the 23rd District, a position  Democrat Rep. Sherry Appleton is retiring from after eight terms.

Dolan said she hopes the new legislation will encourage more parents with criminal records to use the pathways provided to be more active in their kids’ lives.However, Simmons noted that there is no appeal process for those who are denied, something she had wanted to be included in the bill.

Landa also has uncertainties about parts of the bill. She said that in the past she has felt discouraged by the process of justifying herself to Zach’s school because it feels “shameful” and  “embarrassing.” If the new legislation truly does make it easier for parents to explain their circumstances in order to volunteer, Landa said the “possibility is really powerful.”

“When you start allowing what is just, then you start to change the culture and you start to humanize a set of people as well,” Landa explained. Discriminatory practices only “create further stigma and shame, and children shouldn’t have to carry that with them,” she said.

Another measure being considered would affect an even larger group of people across the state.

Senate Bill 6228 would restore voting rights to people with felony convictions immediately upon release from the Department of Corrections. Those who have been released from confinement could re-register to vote right away, even if they are still under community custody or still paying legal financial obligations. In addition, once restored, voting rights will now be permanent instead of provisional.

Sen. Patty Kuderer, D-Bellevue, is the bill's primary sponsor. During a January public hearing on the bill, she told committee members that “voting is one of the most sacred and fundamental rights we have as Americans.”

She explained how community custody gives people a second chance at life because they’re able to live in their communities, get jobs and pay taxes. Kuderer said she thinks “restoring the right to vote and the right to participate in our democracy is an important tool for that reintegration process.”

Kuderer noted there are equality and social justice issues at stake. “Blacks and Native Americans are overly represented in our criminal justice system,” she said. Nationally, 13% of African American men cannot vote.

As the current law stands, people with felony convictions receive only provisional voting rights when they are released from prison, as well as community custody, if that applies. Furthermore, provisional voting rights can be revoked if someone is unable to pay legal financial obligations. Permanent voting rights are restored when a person obtains a certificate of discharge from the court, a court order, a governor-issued certificate of restoration or a final discharge order from the sentencing review board.

Despite support from groups including the Department of Corrections, the Civil Survival Project, the American Civil Liberties Union of Washington, Washington Association of Prosecuting Attorneys and the state Attorney General’s Office, there is opposition.

Senate Minority Leader Mark Schoesler, R-Ritzville, said in a press release last month that SB 6228 ignores the rights of victims. “Punishment for a crime in Washington does not automatically end at the prison gate, so we should not restore voting rights for convicted felons until they have completed their sentences, including their period under [Department of Corrections] supervision and paying restitution to victims,” Schoesler added.

When asked further in a phone interview about why he thinks paying off legal financial obligations should be be necessary before restoring voting rights, Schoesler said simply that someone with a felony is responsible for paying “their debt to society.”

Schoesler also said in his press release that he thinks the bill “is actually a step toward letting all inmates vote.”

Simmons argued that prison should be rehabilitative, and that it’s a good thing for those who are incarcerated to become civically engaged. “Voting is a pro-social activity” that should be encouraged, she said. Furthermore, studies have shown that allowing people the opportunity to vote upon release reduces prison recidivism.

Democrats aren’t the only ones sponsoring legislation for criminal justice reform.

House Bill 2793, sponsored by Rep. Morgan Irwin, R-Enumclaw, and Rep. Drew Hansen, D-Bainbridge Island, seeks to help those with past criminal convictions clear their records. Under what's being called the Clean Slate Act, the Administrative Office of the Courts would be responsible for developing a process to review criminal convictions to determine whether they are eligible to be vacated. Provided those convictions meet the criteria, the Administrative Office of the Courts will vacate the offense.

Landa testified during a Feb. 3 hearing in the House Public Safety Committee in support of the legislation.

“I think as a society we forget that some of us with criminal records are people, too, and deserve a  chance to live without collateral consequences and legal barriers,” Landa told the committee.

The bill has economic benefits, too, Irwin said.

“You can make a very strong case that in the states that have already gone to this, they are immediately seeing a decrease in recidivism among the folks who are able to vacate their records,” Irwin said. He explained that vacating felonies has allowed people to earn 25% to 50% more than they would with a felony still on their record.

“This is letting folks come back into society after they’ve fully served their sentence,” he added. “These are for the folks who’ve actually turned their life around. We’re just helping them get there.”

Organizations such as the Civil Survival Project, Washington Statewide Reentry Council and King County Bar Association all testified in support. No one testified against the proposal.

“It is estimated that 760,000 Washingtonians are eligible now to vacate their criminal records  and less than 5% have been able to find the resources necessary to vacate their record, move on and have meaningful employment and housing opportunities,” Simmons testified.

Russell Brown of the Washington Association of Prosecuting Attorneys testified as neither for or against the bill, with concerns that implementation might be an issue because Washington, unlike other states that have signed similar legislation into law, doesn’t have a “unified” court system.

Those who are incarcerated for other offenses at the time of the review will not be eligible at that time to have their past convictions vacated. Certain types of felony convictions such as violent offenses or felony DUI cannot be vacated.

If Irwin and Hansen’s legislation passes, the Administrative Office of the Courts must first submit a report to the Legislature in December 2020, based on its findings about matters such as available eligibility data, information that would improve reliability in the court process and a review of current policies. Full implementation would not occur until July 1, 2022.