Will flood protections set back salmon restoration in the Chehalis River Basin?

A flood control dam proposal on the Chehalis complicates a multimillion-dollar effort by tribes and lawmakers to bring back declining salmon runs. 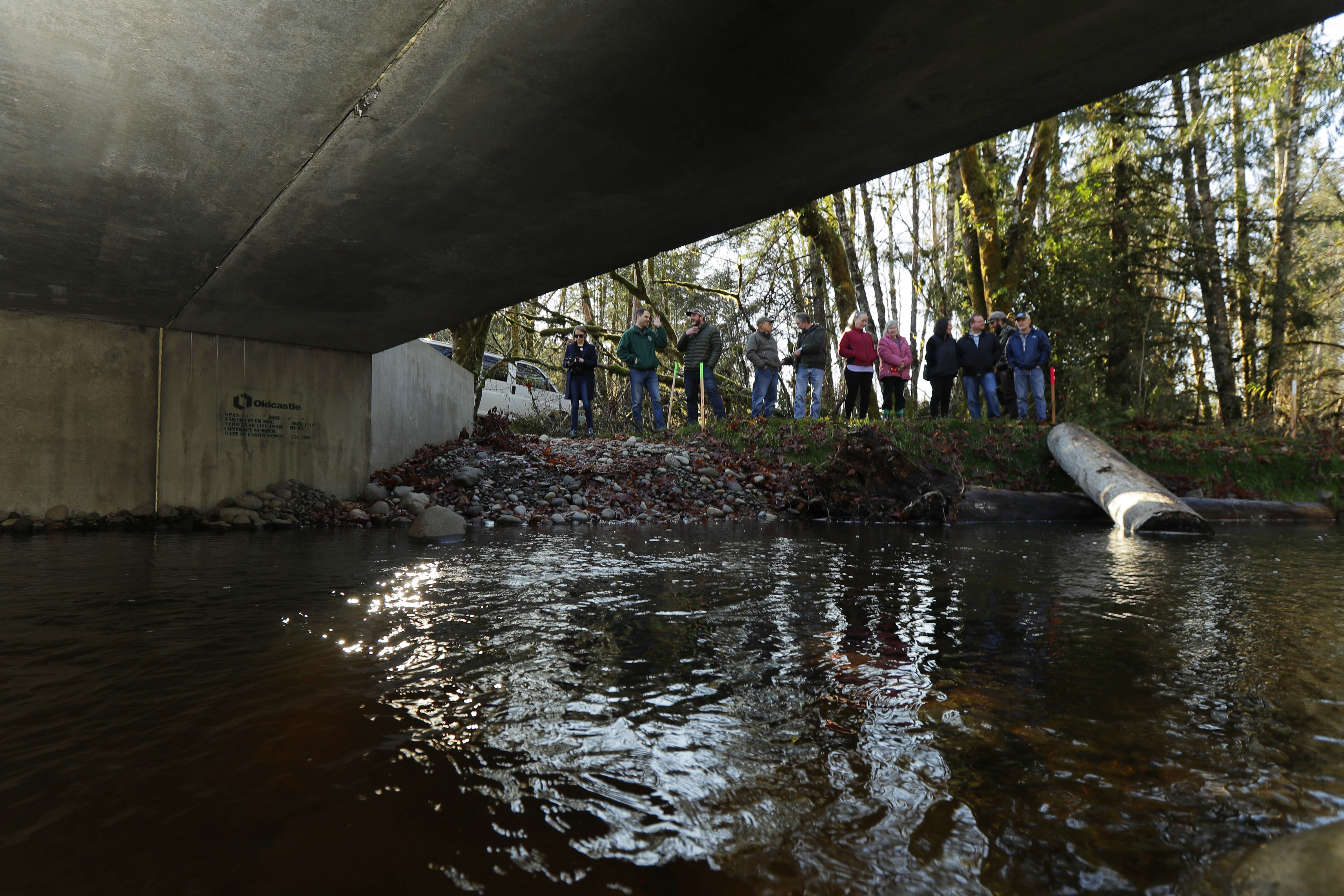 Visitors view a widened passage for salmon to swim up the Middle Fork of the Newaukum River under Middle Fork Road near Chehalis, Lewis County, Nov. 20, 2019. (Ted S. Warren/AP)

From atop the new and nondescript concrete highway bridge crossing State Route 508, the Newaukum River looks more like a stream: bigger than a creek, but smaller than a true river. It cuts through the flat plain of Lewis County east of Interstate 5 and Onalaska.

“This is a million-dollar bridge,” said Kirsten Harma, watershed coordinator of the Chehalis Basin Lead Entity — a coalition of tribal, local and state government agencies, as well as citizens focused on salmon recovery in this area.

This bridge is one small piece of a decades-long, multimillion-dollar effort to restore shrinking Chinook salmon and steelhead runs to the Chehalis River Basin. With the old bridge and culverts removed, the shoreline could return in time to a state that fosters healthy salmon runs.

But lawmakers will have to balance salmon needs with human ones. South of the hamlet of Pe Ell, a proposed flood control dam on the Chehalis upstream of the Newaukum could provide relief from floods that sometimes stretch all the way to close I-5. But some worry the upstream dam could inhibit all those restoration efforts. This year, several state and local agencies and entities in the basin will decide how to tackle the first phase of rebuilding the area’s salmon population, and funding the flood control dam will be at the center of the debate.

The Chehalis Basin extends from hills south of Pe Ell to the southern end of the Olympic Peninsula, occupying huge chunks of Lewis, Thurston and Grays Harbor counties. Its 2,700 square miles are veined with a network of 3,400 miles of rivers, streams and creeks that all contain numerous salmon spawning areas.

According to a 2016 report to the Quinault Indian Nation by Larry Lestelle, a Poulsbo-based fisheries biologist who has studied the Chehalis Basin for 45 years, the basin historically saw an average of 778,000 steelhead, coho and Chinook salmon swimming upstream a year. That number fell to 111,8000 in 2003 and to 75,500 in 2016. Without restoration, Lestelle estimates numbers could drop to 40,300, threatening local tribes and fisheries. Of those, spring Chinook are the most threatened: In 2016 only 1,500 returned. Without aid, that number could fall to 200.

None of the runs in the Chehalis Basin has been designated yet for protection under the Endangered Species Act, but local officials alarmed by the loss in fish worry that protection could come too late.

“Spring Chinook are not collapsing yet, but are on the verge of collapsing,” said Tyson Johnston, vice president of the Quinault Indian Nation.

“It is a lot easier and far cheaper to protect salmon populations before they are threatened,” said Jessica Helsley, Washington senior program manager at the Wild Salmon Center.

According to the state Department of Fish and Wildlife and other Chehalis observers, climate change is a major culprit in the salmon’s decline. In an early January presentation in Centralia, state experts noted that 25% of the Chehalis River Basin retains optimal temperatures for coho salmon. That is expected to decrease to 6% by 2040 and to 2% by 2080. Several experts said Chinook are the most vulnerable to the increasing temperatures because they spend the most time waiting in upstream areas to spawn.

But human development has straightened stream segments, removed shade trees, smoothed the distribution of sediments, deepened channels to below spawning depths and created thousands of culverts that dam the river when channels levels drop below them, trapping fish. Water pollution plays a part, although not as much here as in more populated parts of Washington.

According to Lestelle, all options for restoring salmon will be slow, expensive and incremental. A plan put together by state, tribal and environmental groups proposes three scenarios for restoring the basin. All incorporate some combination of shoreline restoration and culvert or barrier removal at a cost of $300 million to $1.1 billion. The plan would rehabilitate between 200 and 400 miles of shoreline and replace 200 to 450 culverts and barriers.

So far, the basin’s salmon recovery project already has $128.3 million allocated for the 2019-2021 budget biennium.

On top of that existing appropriation, Rep. Richard DeBolt, R-Chehalis, has introduced a bill seeking $480 million to pay for future salmon recovery efforts in the basin, raising the cash with bonds. Meanwhile, Sen. David Frockt, D-Seattle, chairman of the capital budget subcommittee of the Senate’s Ways & Means Committee, says it is too early to tell how the Senate might address this matter.

The Quinault Indian Nation supports restoration plans that cost $550 million to $1.1 billion in funding, Johnston said. Based on recommendations from Lestelle, they hope to begin recovery efforts as soon as possible.

“This is going to be several generations of work,” Johnston said.

Since most of the shoreline is on private property, owners will have to be approached individually for permission. “There’s a tremendous amount of landowner outreach that has gone into this,” Wild Salmon Center’s Helsley said.

On those lots, workers will plant shade trees, shift sediment and gravel, carve out new eddies and pools and widen and deepen culverts. Replacing narrow culvert tubes with bridges like the one over the Newaukum will enable the river to restore the shoreline to its natural state.

The proposed flood control dam complicates restoration efforts and pits human needs against those of the salmon. The Chehalis River has flooded 18 times in the past 20 years. Major floods can reach I-5; in 2009, floodwaters closed a 20-mile stretch of I-5 for several days in Lewis County. Centralia took several months to recover from the damages of a 2007 flood.

The proposed dam would not eliminate all flooding, but limiting the length and extent to which the river and its tributaries overflow could cut back on damage to roads and floodplains. The Lewis County flood control officials did not return messages for comment.

Dam plans call for a 1,220-foot wide, 254-foot tall concrete wall capable of creating a reservoir five to six miles long with 778 acres of surface area. Three to five pipelike channels at the bottom are intended to allow fish passage, but those channels could be closed during flood threats. The cost estimate is $628 million.

The Chehalis River Alliance contends that with inevitable cost overruns, the price could go up to at least $1 billion.

Lestelle noted that as the dam’s reservoir fills every seven years or so, it would cover the shallow nesting habitat salmon prefer. Upstream of the dam is prime fish spawning area: Lestelle’s 2016 report estimates that 308 to 622 adult coho and 55 to 82 adult spring Chinook head upstream of the dam site to spawn each year.

Johnston said the Quinault plan to wait until state and Army Corps of Engineers’ environmental impact studies are completed before taking a formal stance. The Chehalis Tribe didn’t return phone calls for comment.

The state environmental impact study on the dam is due in late February, with the Army Corps study to come in September.

Correction: This article incorrectly stated the price of the Newaukum bridge as $9.5 million. The figure cited was for another bridge on the Newaukum. It also identified the Chehalis River Alliance as the Chehalis Lead Entity.