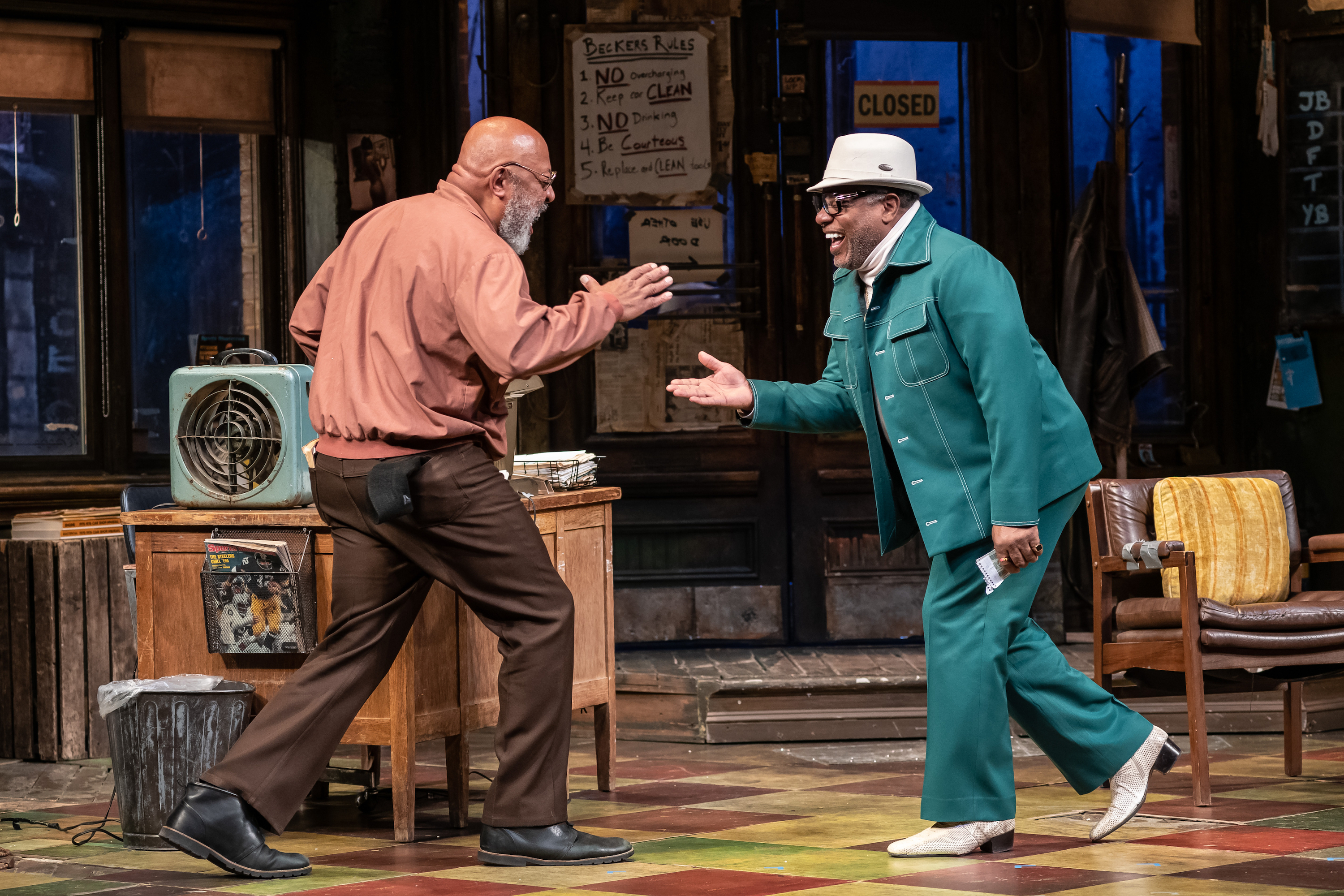 Keith Randolph Smith (as Doub) and Harvy Blanks (as Shealy), in the touring cast of August Wilson's ‘Jitney’ at Seattle Rep. (Nate Watters)

Before Uber, before Lyft, there were jitney cabs — unlicensed, for-hire vehicles that sprang up to serve inner-city neighborhoods that commercial taxis preferred to bypass. We meet a crew of such drivers in the play Jitney, set in 1977, hanging out in a rundown jitney cab office in Pittsburgh’s Hill District. There’s little plot but plenty of humanity in this group portrait: As they await calls for rides, the men josh and boast, ruminate and clash (verbally and physically), spin yarns and ponder the loss of their dilapidated station to so-called urban renewal projects. And they wonder aloud what the future holds for themselves and their beleaguered community.

These individuals have colorful pasts, strong personalities, a trunk load of regrets and a complicated but resilient camaraderie. In other words: These are August Wilson people.

Playwright August Wilson — who spent 15 of his 60 years as a Seattle resident, and died at Swedish Hospital in 2005 — is renowned for creating vital, indelible characters. They populate his celebrated “Pittsburgh Cycle,” the 10-play, decade-by-decade rumination on the 20th century African American experience that includes Fences, Ma Rainey’s Black Bottom and Jitney. His bluesy, mellifluous portraits of Pittsburgh life are tremendous acting showcases, and earned him two Pulitzers and a Tony Award (for starters).

As the first Black dramatist to have multiple plays repeatedly produced at regional theaters throughout the U.S., on Broadway and internationally, Wilson also inspired and encouraged a wave of up-and-coming Black directors and writers. Moreover, he boosted the careers of a drove of gifted Black performers. The result is that now there is a kind of floating, nationwide repertory company of players well versed in and dedicated to his work.

A list of people who’ve thrived in Wilson’s dramas reads like a who’s who of Black actors. As the grieving girlfriend of a slain blues musician in Seven Guitars, Viola Davis rose from scuffling player to Tony-nominated (and later Oscar-awarded) star. The now in-demand Davis returned to Wilson’s work to win a Tony on Broadway and an Oscar in the film Fences, opposite Denzel Washington, another devotee of Wilson’s plays.

Angela Bassett, Charles S. Dutton, Courtney Vance, Laurence Fishburne and other luminaries also came to the fore in Wilson plays. Many of those works had pre-Broadway runs at Seattle Rep, his appreciative hometown theater — which was among the first to produce the entire Pittsburgh Cycle.

Why are there are so many illustrious Wilson alums? Actors gravitate to where the work is. And in the 1980s and 1990s, few living Black playwrights other than Wilson were getting produced with any regularity on prominent stages. While the audiences at major regional theaters in Seattle, Los Angeles, Chicago and New Haven, Connecticut, were predominately white, Wilson’s impassioned, witty depictions of family strife, working-class striving, love and injustice were culturally specific, but spoke eloquently across racial lines.

“August opened that door,” says Ruben-Santiago Hudson. The veteran actor, director and playwright staged the vibrant Broadway production of Jitney, which earned a Tony for Best Revival of a Play and is wrapping up a 5-city national tour at Seattle Rep. “He showed that diverse audiences could be interested in more stories than just their own.”

Hudson’s own acting career took off when Wilson tailored the character of Canewell, an acerbic blues harmonica player in Seven Guitars, to his dimensions — a Broadway role that earned him a Tony Award. Since then, in addition to directing and performing in many Wilson shows, Hudson has produced radio versions of all 10 Pittsburgh Cycle plays for public radio station WNYC. Recently he wrote the screen adaptation of Wilson’s breakthrough Broadway hit, Ma Rainey’s Black Bottom, for a Netflix movie premiering this year (Viola Davis will star as the early, influential blues diva Rainey).

“It was a great opportunity for all of us that there was August in our lifetime,” Hudson says. “August wrote three roles for me, and the work has fed me wonderfully. I don’t mean just financially, but artistically.”

Jitney is especially resonant for Hudson. “I have a deep history with this play,” he says. “August wrote it in 1979, but it wasn’t complete. When he finished it much later, he put in a lot of dialogue that he’d cut out of Seven Guitars — much of it originally for my character, Canewell.”

There is a seamlessness in the Rep’s Jitney ensemble, a palpable rapport that helps us believe these men have known one another through years of hard and better, sweeter and bitter times.

Sometimes, cabbies like Doub (Keith Randolph Smith) and especially the gossipy Turnbo (Ray Anthony Thomas) philosophize to rationalize their own mistakes. There’s some hilarious “jive talk” (by the ebullient numbers runner Shealy, played by Harvy Blanks). And though most of these men are nearing retirement age, there are several young people — the driver nicknamed Youngblood (Amari Cheatom), his fed-up girlfriend Rena (Nija Okoro) and Booster (Francois Battiste), the troubled son of the station owner Becker — trying to make their own way forward.

All of them have plenty to say. “Time just keep going,” says Turnbo. “It don’t wait on nobody. Everything change.” At another point, Becker reflects, “I used to question God about everything.... After Coreen died I told myself I wasn’t gonna ask no more questions. ’Cause the answers didn’t matter.”

Yet not every talented Black actor has mastered his signature sidewinding monologues, playful trash talk, and his singular meshing of the down-home, the supernatural and the melodramatic, he notes.

Jones suggests that Wilson, an avid fan of Black roots music and jazz, crafted his scripts like musical scores. “I think what some actors tend to do is not hear the music, the rhythm and the flow. It’s so strong, you can just ride it. The biggest mistake is rather than letting the language do the work, they start acting it. They pause and break the speech up. They’re not employing that great rhythmic tool that’s always present in his work.”

That’s not the case in Jitney, which features a superb cast steeped in Wilson’s theatrical patois and worldview. Anthony Chisholm, a lanky scene stealer with a rubber-band voice that can vault from a gruff bass to a squeaky tenor in a single line, is encoring in Seattle the role of the endearing alcoholic cabbie Fielding, whom he first portrayed at the Rep in 2002 and later on Broadway. A quintessential Wilson favorite, Chisholm was also in the Rep casts for the cycle plays Two Trains Running and Radio Golf, and on Broadway in his Gem of the Ocean.

Like Chisholm and other cast mates, Jones too has a broadly eclectic acting résumé but a special affinity for Wilson’s oeuvre. As an actor he has logged five Wilson plays.

“I’ve loved doing every one of them,” Jones remarks. “The great thing about August’s characters is their deep authenticity. I’ve worked across the canon — doing Chekhov, Shakespeare, Tom Stoppard. Those are great writers. But August was writing people we know. To step into that world, whether it’s the world of Fences or Jitney, is special.”