Biden edging past Sanders in ballots from Washington primary 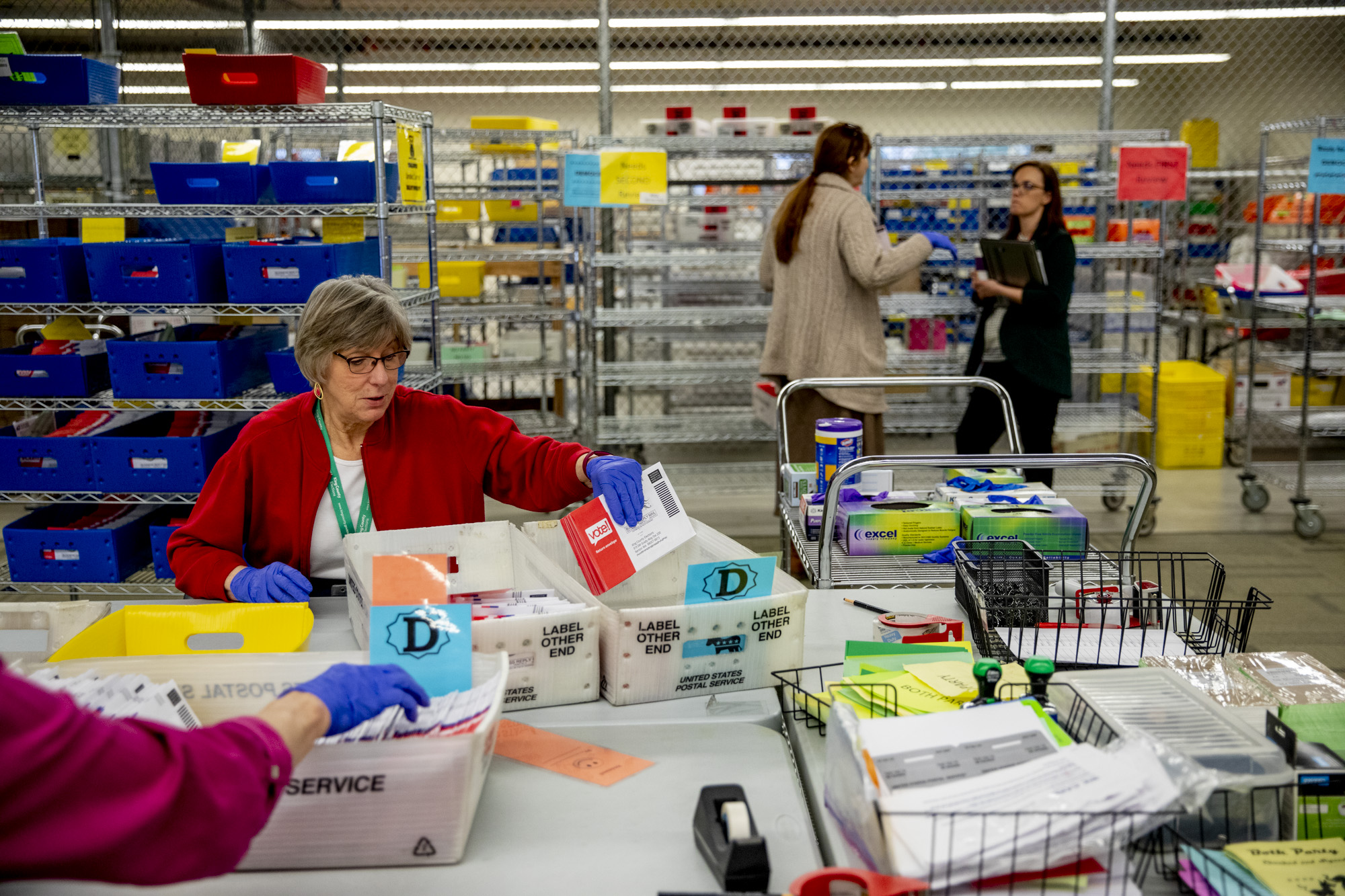 Ballots are processed at the King County Elections headquarters in Renton for Washington state’s primary election on March 10, 2020. Though gloves have always been optional for elections workers, it has become mandatory to prevent problems with COVID-19. (Dorothy Edwards/Crosscut)

Election officials were expecting a record turnout for Washington’s presidential primary, so the results are likely to change as the vote counting continues. It was widely believed that this year's contest will play a bigger role in the nomination process, which may be driving turnout.

“When voters think their ballot matters and it’s going to make a difference, they’re going to turn their ballots in,” said Washington Secretary of State Kim Wyman, hours before the 8 p.m. deadline to return ballots to a drop box.

She predicted 60% of registered voters would participate in the primary, which would amount to more than 2.7 million votes. In 2016, 1.4 million people turned in ballots in a May primary. This year’s statewide count was at 2.2 million by Thursday, but more ballots could still be in the mail. Wyman said half the ballots are typically mailed or dropped off during the election week.

For Biden, it was a decent showing in a string of strong performances — including in the key state of Michigan — that make him the clear favorite to clinch the nomination for the Democrats.

"Just over a week ago, many pundits declared this candidacy was dead," Biden said in Philadelphia, before a mostly empty room due to COVID-19 concerns. "Now we’re very much alive. Although there’s a way to go, it looks like we’re gonna have another good night.”

The spark that Sanders carried through the first several nominating contests — in Nevada, in particular — has been overwhelmed by Biden's recent surge. Sanders did not speak publicly Tuesday night.

In 2016, Washington Democrats used caucus results instead of the primary to decide on delegates to the national party convention. Sanders won the caucuses that year, but former Secretary of State Hillary Clinton won the primary.

The latest polling showed Sanders and Biden virtually tied to win the Washington primary. Biden was projected to win Tuesday in Michigan, Mississippi and Missouri, widening the delegate count to 724 for Biden and 586 for Sanders. Primaries were also held Tuesday in Idaho and North Dakota.

David Yamaguchi, 62, dropped off his ballot Tuesday afternoon at a drop box in Seattle’s Beacon Hill, casting a vote for Biden.

After taking a selfie of himself submitting his ballot, he said he believed Biden had the best chance in November.

“I think I’m with a lot of people in that he’s not the perfect candidate, but I just want Trump out of there,” said Yamaguchi, a freelance writer.

“I think the interesting thing from now will be who the Democratic candidate chooses for a running mate. I think that could make a difference. Ideally, they choose one of their competitors,” Yamaguchi said, adding that the coronavirus outbreak has reminded him how much this country needs strong leadership.

Bean Yogi, 32, who also dropped a ballot off in Beacon Hill, chose Sanders. They were pleased Sanders is doing so well this time after the way the last election cycle ended up. In 2016, Sanders lost a close race to Clinton in a contest that his supporters viewed as unfair.

“So the fact that he’s a frontrunner even with all that is stacked against him in his own party is pretty exciting,” Yogi said.

They believe they picked the candidate who is most electable this year and who can beat Donald Trump.

“What we think of when it comes to electability is really skewed by our own social positions and our own biases and our own assumptions about who’s politically powerful,” said Yogi, who works at Highpoint Library. “So when I think about electability, I try to zoom out of my bubble, but I also think a progressive candidate can win.”

The Legislature decided in 2019 to move the Washington presidential primary from May to March, in hopes of making Washington more of a player in the nomination process. State Democratic Party officials decided soon afterward to break with decades of tradition and use the primary to allocate delegates to the national convention, which will be held this summer in Milwaukee.

The coronavirus outbreak was not expected to be a factor in Washington’s vote-by-mail primary, although county election officials mandated the use of gloves for handling ballots and prepared for the possibility of workers being on sick leave on critical days.

Wyman said she empathized with her elections colleagues across the country, where people do not vote by mail.

“How do you keep the people working in election offices and polling places safe, when all the advice is to not go out in public?” she asked, adding that turnout in other places could also decrease because voters are not comfortable standing in line with strangers.

David Kroman contributed to this report.

Updated with Thursday afternoon vote updates in many counties.