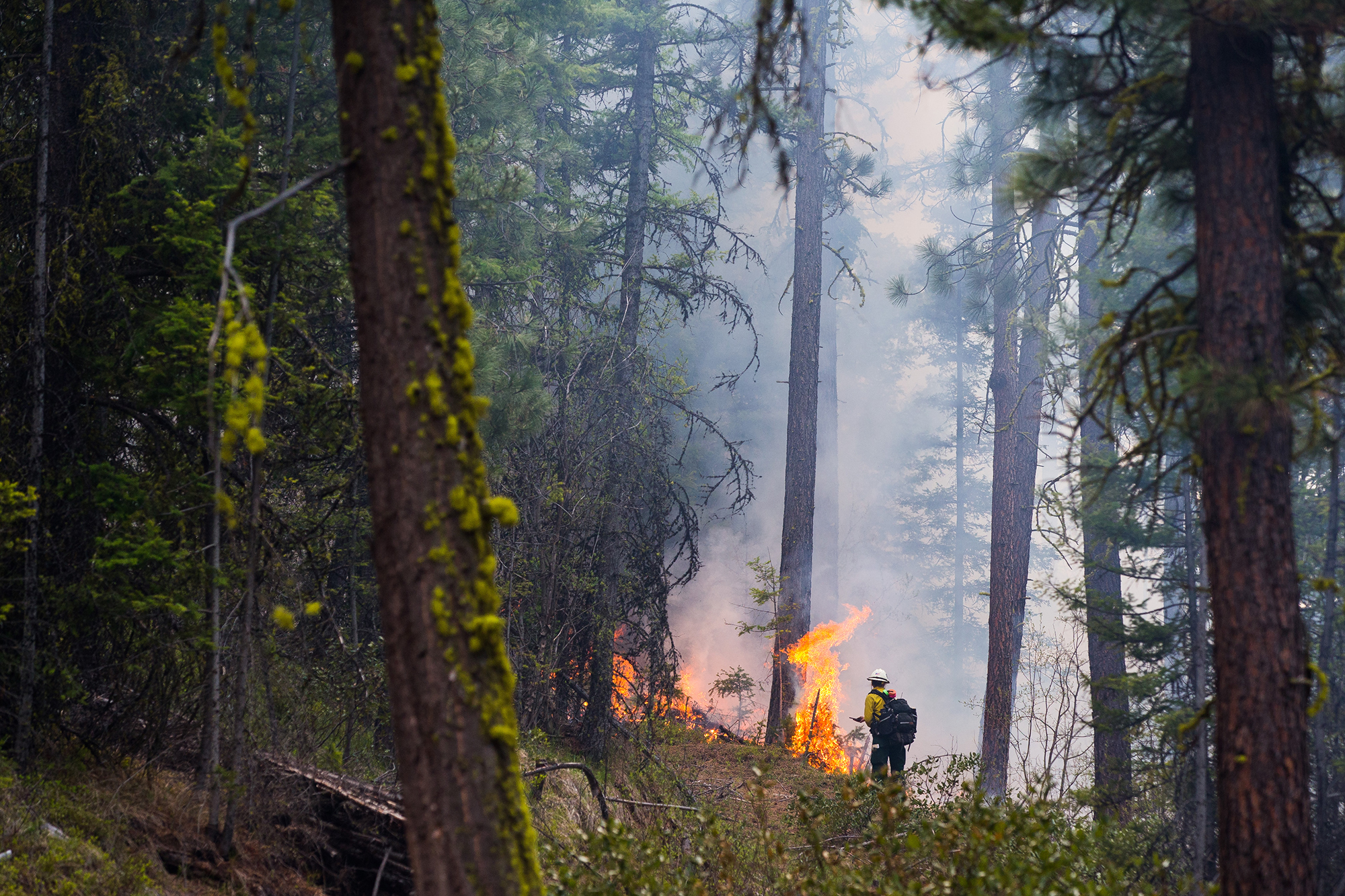 A firefighter uses an ignition tank to set underbrush on fire during a prescribed burn in Okanogan-Wenatchee National Forest near Liberty, Wash., May 7, 2019. Recruitment for firefighters to aid with burns normally occurs in early spring, but many organizations that normally would manage the process are currently busy with the state's response to COVID-19. (Dan DeLong/InvestigateWest)

The state’s ability to fight wildland fires this summer could be seriously hampered by the coronavirus outbreak.

In a recent interview, Washington Public Lands Commissioner Hilary Franz said agencies that usually plan for fires and which recruit firefighters in early spring are instead helping organize Washington’s response to the global pandemic. She said she is also worried that fewer people will sign up to fight wildfires this summer because it’s so difficult to stay apart from co-workers on a fire line and in crowded camps where firefighters sleep.

State officials suddenly find themselves in the extraordinarily difficult position of wondering if they can mobilize the thousands of firefighters who may be needed in a bad fire season.

Franz and most of her staff are working from home while helping agencies find state land that could be used for temporary field hospitals or quarantine areas if the COVID-19 outbreak worsens. They are also lending first-responder expertise on how to handle a crisis and tap into federal aid.

Adding to the problem: Because the 2019 fire season was relatively mild, this summer’s season could be worse. Fuel that didn’t burn last year has built up on the forest floor.

The National Wildfire Coordinating Group, a federal agency that establishes fire operations standards, has published new guidance on how to deal with an infectious disease outbreak during a wildland fire incident. But “it does not address how to generally manage a workforce of firefighters during a pandemic before they are dispatched to a wildfire,” said the online wildfire-news site Wildfire Today. “Nor does it suggest, other than hygiene, any different strategies to implement while suppressing a wildfire during a pandemic.”

Tightly packed camps routinely set up by wildland firefighters in response to active fires amount to instant towns, which the Wildfire Coordinating Group said, “create an ideal environment for the transmission of infectious diseases: high-density living and working conditions, lack of access to and use of soap and sanitizers, and a transient workforce.”

Washington state’s forests are more fire-prone than ever because about 2.7 million acres of timberland are unhealthy — the result of drought, disease and insect infestation — or because fires have been suppressed, leading to a buildup of fuel. Anyone who’s driven through timber country has likely seen evidence of this sickness in the form of patches of reddish needles on dying evergreens, Franz said.

The coming fire season follows hard on the heels of the Washington Legislature’s failure to pass legislation requested by the state Department of Natural Resources (House Bill 2413) that would have set up a dedicated fund to pay for forestry work to reduce the risk of wildfires, primarily in Eastern Washington. The money would have come from a $5 surcharge on property, auto and other casualty insurance policies. That bill withered early in the session because of opposition from the insurance industry, well before the virus began dominating the news.

Environmentalists had hoped to establish a dedicated fund to keeping forests healthy. “What we want is an underlying change, an ongoing commitment to fund forest fire prevention and forest health,” said Mo McBroom, director of government relations at The Nature Conservancy of Washington.

Some environmental groups had talked about mounting a campaign to put the insurance surcharge on a statewide voter referendum this fall. But now they fear a coronavirus-caused recession will make it impossible to pass any kind of new fee or tax increase, said Lauren Breynaert, coalition director at the Climate Alliance for Jobs & Clean Energy, a coalition that includes environmental and labor advocates, as well as faith groups and racial-equity advocates.

As part of the Legislature’s biennial budget last year, the Department of Natural Resources received an extra $48 million to fight fires, cut small and diseased trees, and burn underbrush. When the Legislature approved that appropriation, the devastating wildfires that choked the region with smoke in August 2018 were fresh on lawmakers’ minds. But the same sense of urgency had vanished this spring, likely because the 2019 wildfire season was mild by comparison, Franz said.

Some of that money also went to buy three used helicopters, bringing the number of state-owned wildfire-fighting helicopters to 10. If the state has fewer boots on the ground, it will have to rely more heavily on those helicopters to fight fires from the air this summer, Franz said.

All 10 of those helicopters were first put in service during the Vietnam War.

“We have underinvested in wildfire resources forever,” Franz said.

The Department of Natural Resources’ 20-year forest health plan, completed last year, outlined the steps the agency could take to reduce the fire risk on the east side of the Cascades by thinning small and diseased trees and burning underbrush.

Although HB 2413 didn’t get far through the process, it was brought up as a discussion item, Franz noted.

“There was a pretty significant debate on the floor of the House on wildfires and forest health,” Franz said. “So that’s progress.”

InvestigateWest is a Seattle-based nonprofit newsroom producing journalism for the common good. Learn more and sign up to receive alerts about future stories at http://www.invw.org/newsletters/.a