Coronavirus has Puget Sound schools prepping for 'an ongoing risk'

School districts are putting together plans to keep teaching and feeding students through closures during the COVID-19 outbreak. 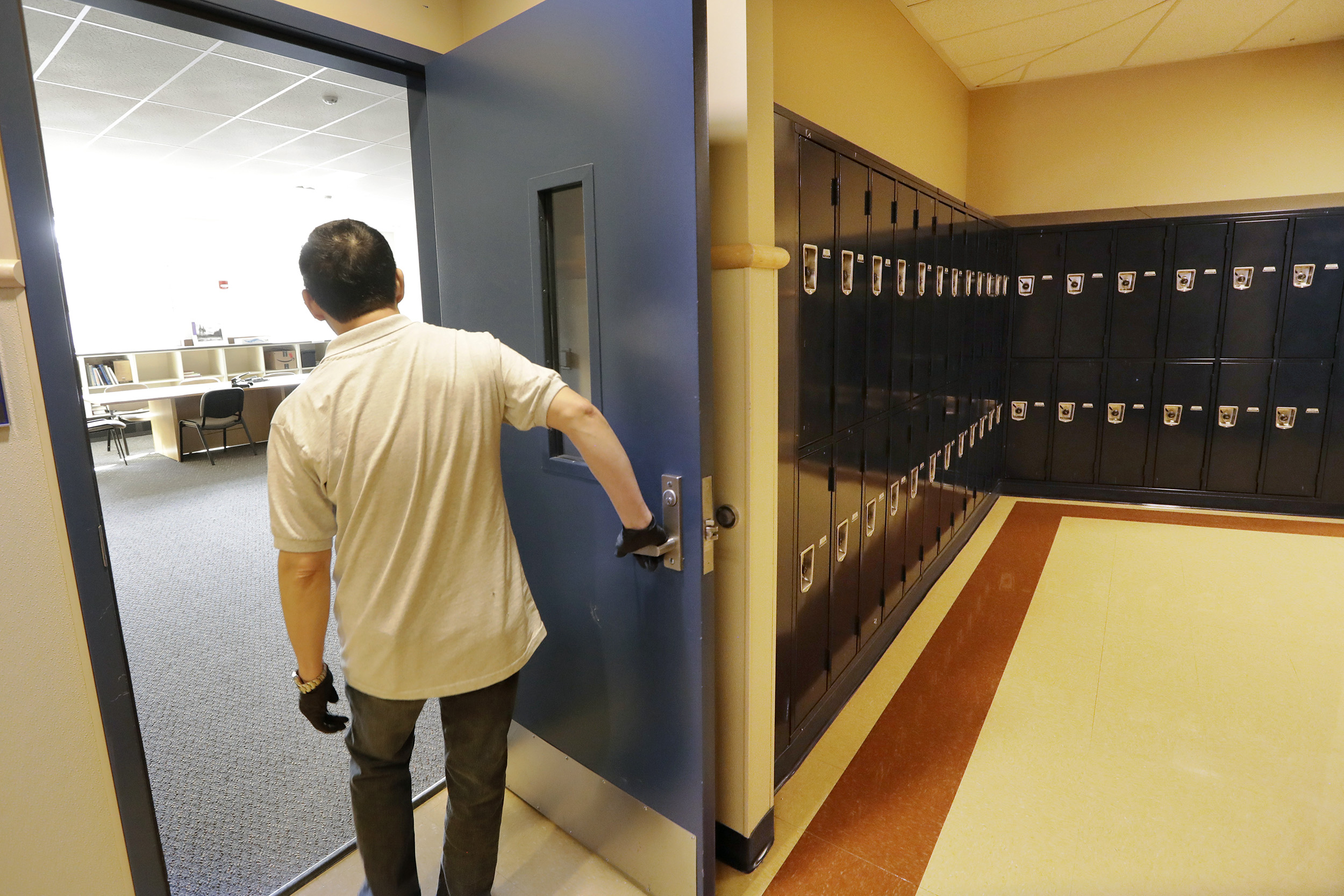 A school janitor opens the door to a staff room inside Bothell High School, closed for the day, Feb. 27, 2020. The suburban Seattle school was closed after a staff member's family member was placed in quarantine for showing symptoms of possibly contracting the new virus, which started in China.The school was cleaned and disinfected while students stayed home. (Elaine Thompson/AP)

In the week since coronavirus emerged in the Northwest, the Northshore School District rode the same tide of curiosity and dread rising around the country. For students, parents and school staff in the suburban Seattle district, though, there is also grief.

In a note to parents and school staff late Wednesday, Reid announced the most aggressive school closure to date in the outbreak — all Northshore schools, which serve 24,000 students, would be shutdown beginning Thursday for up to 14 days.

More than a dozen schools around the Puget Sound have seen daylong closures since, as the number of confirmed coronavirus cases in the region has risen to at least 31, including 10 deaths. Northshore called an emergency inservice Tuesday so teachers and administrators could prepare for a wider outbreak, and mourn.

“We trust one another, so people who've been exposed or lost family members to the current virus self-quarantine,” Reid said in an interview. “We grieve and think about things deeply, and then we do something about it.”

School closures are a piece of that response in Northshore. Announcing the indeterminate closure, Reid said the district will transition “from classroom to cloud” beginning Monday, when students begin online learning.

Standards vary district to district, but administrators have generally closed schools visited by someone with a confirmed or — as tests have proved hard to come by — suspected infection. Several closed after a student or staff member had contact with a potentially infected person. Seattle Public Schools has said schools would be closed only if a student or staff member is confirmed to have coronavirus.

In a pandemic, school closures can be a public health tool — infectious diseases flourish in schools, and illness rates drop communitywide during school holidays. But closed schools can’t educate or provide meals and medical care, and school workers are now racing to fill gaps in disaster response plans.

School districts too often fail to plan ahead for a pandemic, said Terri Rebmann, director of Saint Louis University’s Institute for Biosecurity. Rebmann said administrators, not unreasonably, focus on natural disasters and in-school violence when prepping for emergencies. In disaster exercises, she said, “very, very few of them are thinking about an infectious disease scenario.”

In 2009, the H1N1 flu outbreak caught many American school systems unprepared for a pandemic, said Rebmann, whose groundbreaking research into the issue found most school districts had not coordinated with health authorities or provided basic infection prevention training to students.

“This is an ongoing risk,” she said, “and something that schools need to build into their disaster plans.”

While coronavirus has shown up in few schools so far, concern is rampant. Reid said her schools received more than 1,000 inquiries from parents. Randy Matheson, community relations director at the Renton School District, said parents there have been contacting school staff looking for information since a high school was closed Monday.

“There is a concern, obviously,” Matheson said. “There is fear, depending on what they're reading in their understanding of it. And then there are some who understand that if you are not showing signs of flu, the chance that you have coronavirus is pretty, pretty low.”

So far, coronavirus appears to cause a milder illness in children, said Dr. Laura Faherty, a pediatrician and researcher with the Rand Corp. That’s good, of course, but also concerning — infected children can spread the disease.

Faherty advocates “social distancing” — basically, keeping students away from one another — during an outbreak when closing schools isn’t appropriate. In theory, students — or adults in the wider world — could walk farther apart, avoid crowded spaces and minimize physical contact with one another. While researching distancing for a study published in June, though, Faherty found such precautions are difficult to put into practice.

Faherty stressed that clear communication is crucial during an outbreak. With the coronavirus, she said, “the situation is changing quickly, and there’s a lot of uncertainty and fear.”

Liz Pray, a school nurse in Moses Lake, described a fear building in her Eastern Washington community as parents followed news of the outbreak on the west side of the Cascades. Their worries intensified Tuesday as health officials confirmed that two Grant County residents were being tested for possible coronavirus, and that several workers at the hospital where one was treated were being quarantined.

Classroom life remains much the same, Pray said, although nurses are drilling students on washing up, covering their mouths and staying home when sick. Pray said she recently delivered some prevention to a kindergarten class during a Dr. Seuss Day reading.

“Before I read Green Eggs and Ham, we had a talk about covering coughs and sneezes and washing our hands,” said Pray, president-elect of the School Nurse Organization of Washington. 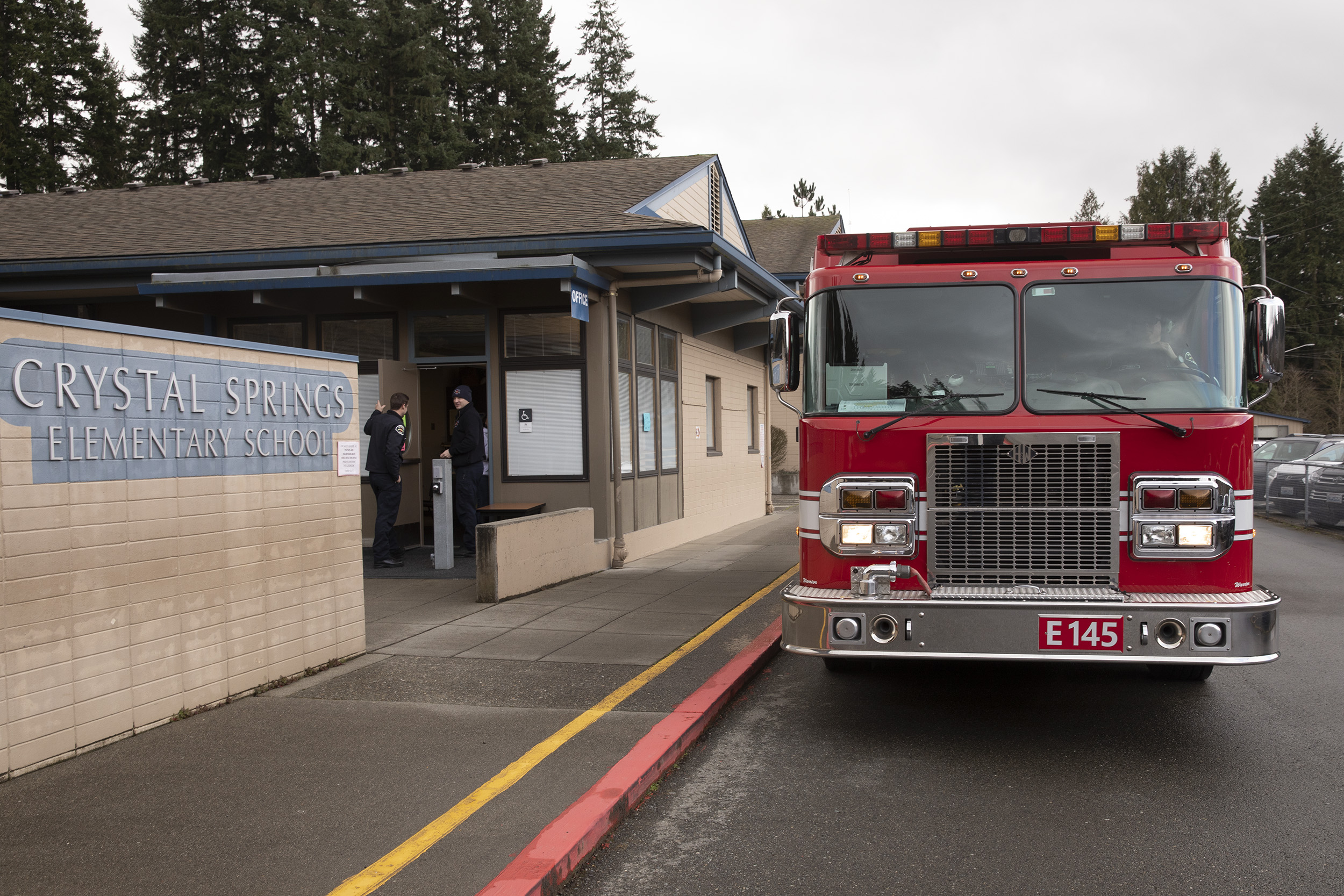 A Bothell Fire Department engine visits Crystal Springs Elementary School in Bothell during the morning of March 3, 2020. According to the fire department they visited the school to obtain new master keys in case of an emergency, and it was unrelated to the recent outbreak of coronavirus in the region. (Matt M. McKnight/Crosscut)

A Bothell Fire Department engine visits Crystal Springs Elementary School in Bothell during the morning of March 3, 2020. According to the fire department they visited the school to obtain new master keys in case of an emergency, and it was unrelated to the recent outbreak of coronavirus in the region. (Matt M. McKnight/Crosscut)

Most school closures so far have been for cleaning. In Renton, Hazen High School was shuttered so janitors with hospital-grade disinfectant could sanitize areas frequented by a student experiencing flu symptoms after a family member was exposed to a coronavirus patient. Custodians in Marysville, Kent, Shelton and elsewhere have been called to similar work, donning masks and gloves to clean schools that might house the virus.

“People are stressed, but overall the attitude is very positive,” said David Nowotny, a school maintenance worker in Snohomish County and an officer in the union representing school support workers.

“We're well-equipped to disinfect the schools the way they need to be, fighting that unseen enemy that we're all looking for,” he continued. “These are spaces intended for community empowerment, and it's our duty, it's our honor to do our jobs to keep them clean, maintained and safe.”

Coronavirus’ capacities to spread and to kill aren’t yet clear. Until that’s better understood, Rebmann said, it’s unknown whether lengthy school closures will be common. While the virus’ fatality rate reported where the outbreak began in China compares to the 1918 “Spanish Flu” epidemic that forced widespread school closures, that rate is likely inflated.

“We’re getting our data from people who died from the disease or who were hospitalized with it,” said Rebmann, the epidemiology professor, “but it’s very likely that there were a lot more mild cases that aren’t being counted.”

Schools usually remain open during less-deadly pandemics like the 2009 outbreak, Rebmann said, and those that close usually reopen within days.

While other schools have been closed after unverified exposures, Seattle Public Schools plans to consider closure in cases where the virus’ presence has been confirmed by a lab, a district spokesperson said. Students or staff who are not ill but have had “close contact” with someone confirmed to have coronavirus will be sent home, and the school would be cleaned after-hours.

Facing the prospect of longer closures, districts are preparing to set up services that will allow education to continue and support students who rely on school for meals or other needs.

About 44% of Washington’s 1.1 million students are eligible to receive free or reduced-price meals. To keep those students fed if schools close, districts are looking to recast other programs. Reid said Northshore would rely on a system it used during last winter’s “Snowpocalypse” that enabled parents to request meal deliveries. In Renton, Matheson said, administrators look to a summer program that sees meals provided at city parks and community centers.

Online learning could replace classroom instruction during a lengthy closure, although Rebmann found most schools weren’t prepared to make that transition in an emergency.

On Tuesday, Northshore teachers gathered at school gyms and libraries to shape the online education systems they will now rely on. As they did, bus drivers cleaned their vehicles and custodians sanitized hallways and handrails. Kitchen staff scrubbed and shifted stations, Reid said, to keep “little hands” off the food.

“Everybody that's working on all of those pieces feels like they're a part of a solution to keep this community healthy and safe,” the superintendent said. “When things happen, we pull together.” 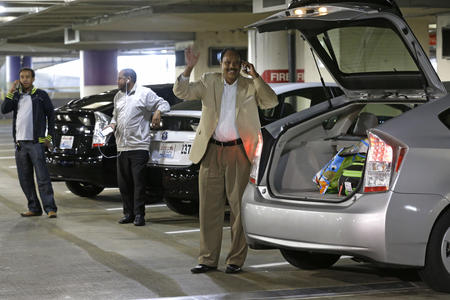