As coronavirus spreads, rural Washington prepares for the worst

Hospitals across the state are readying for COVID-19 with triage tents, pop-up clinics and a hunt for crucial supplies. 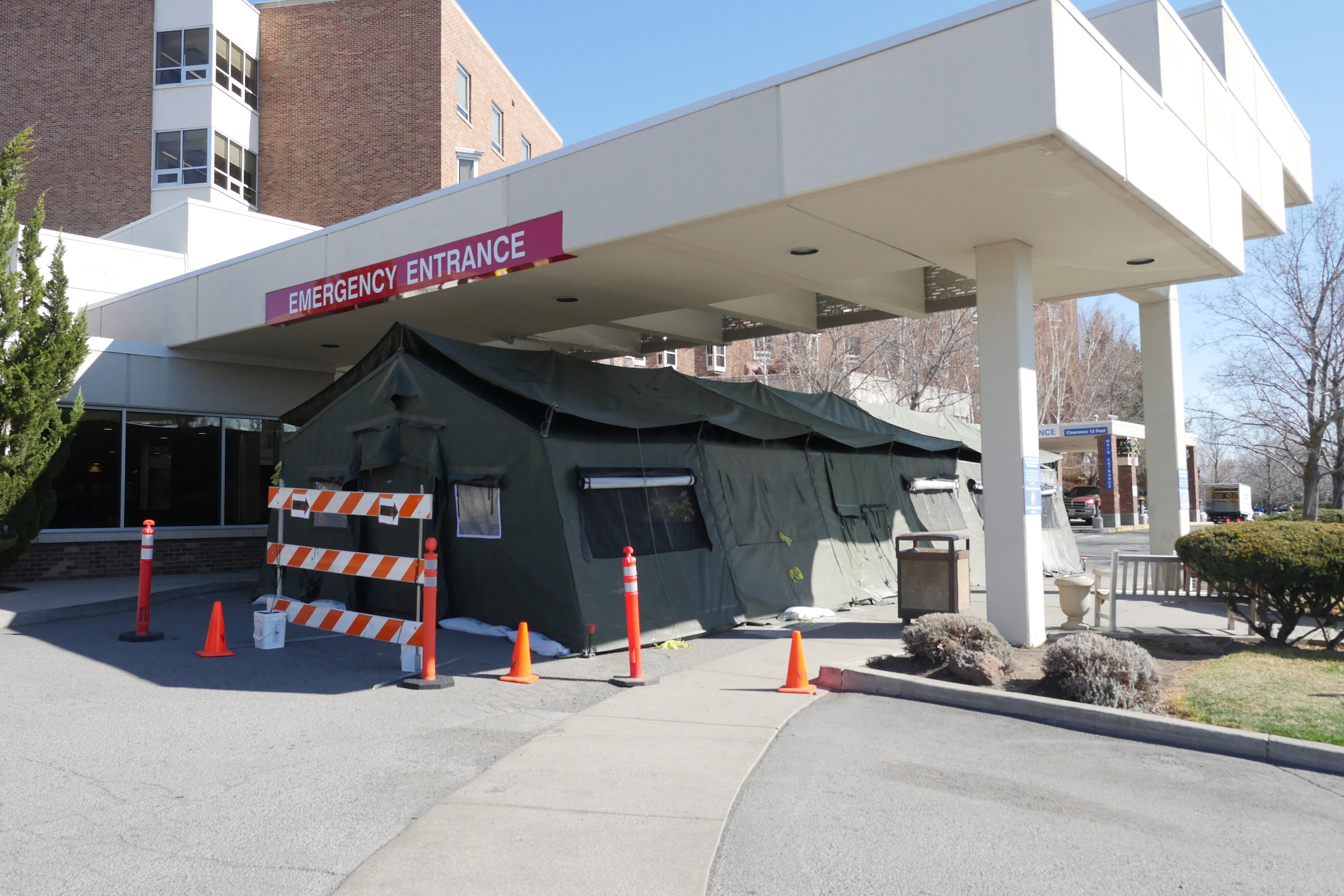 A medical tent is erected outside of the emergency room at Yakima's Virginia Mason Memorial hospital to triage and screen COVID-19 patients, March 18, 2020. (Emily McCarty/Crosscut)

Although Eastern Washington has had only two deaths so far, rural Washington is preparing for the statewide epidemic of COVID-19 to spread outside of the Seattle area.

After a man in his 80s from Grant County died at Central Washington Hospital in Wenatchee, the first death from COVID-19 in Eastern Washington, the Grant County Health District warned the public: "We know that COVID-19 (novel coronavirus) is in our communities, and likely above the number of cases we already know."

While medical systems across rural Washington are gearing up, they’re worried about three main resources: staff, space and stuff.

That’s according to Jacqueline Barton True, vice president of Washington State Hospital Association’s rural health programs. She’s most concerned with the fate of critical access hospitals that could be easily overrun. These small rural hospitals have 25 or fewer beds and are significantly separated geographically from nearby hospitals.

“So how do you use the space available to you? Do you have the staff to take care of the patients? And then stuff: things like masks, personal protective equipment,” Barton True said.

Rural hospitals are ready and have been ready, she said. Hospitals already have year-round infectious disease protocols, and the novel coronavirus will be treated accordingly.

MORE ABOUT DEALING WITH CORONAVIRUS: One couple's experience.

“The way they're prepping for this emergency is not unlike the emergency drills they carry out throughout the year,” Barton True said. “I've heard from the CEOs that they've been really impressed with their staff, that they're moving through exactly as they've been training to do.”

One of those CEOs is Diane Blake of Cascade Medical in Leavenworth. She said that while she is continually blown away by her staff’s preparedness, they can’t afford to take a huge staffing hit.

Cascade is a critical access hospital with nine beds, 30 minutes away from Central Washington Hospital, where the first Eastern Washington patient died. Cascade had tested its first potential COVID-19 patient on a Monday and had to wait until Friday for results, which were negative.

In those five days, 14 of the hospital’s employees had been exposed to the patient and were sent to self-quarantine at home. New state Department of Health guidelines allowed the asymptomatic employees to return to work, Blake said. They received a temperature check at the beginning of every shift and donned mandatory face masks.

Right now, Cascade is seeing a dip in regular appointments like physical therapy or wellness exams, which will temporarily help if it's inundated with COVID-19 patients, Blake said, but staffing is always a concern. The hospital doesn’t have a surplus of medical staff to pull from if employees get infected.

“We’re not at that point, I want to be really clear about that, but in a small facility, it doesn’t take that many people being out before you’re really, really thinly staffed,” Blake said.

They’re also looking at identifying people not working immediately with patients and who have their emergency medical technician license, pulling them in if needed.

Also among her concerns: shortages of personal protective equipment (PPE). The hospital recently received a call about a back order that is now canceled. Gowns and eye protection are extremely difficult to locate. Blake said since the hospital's orders are so few and far between, when it misses one, that results in a huge hit on their supply.

There’s a national stockpile of masks, gowns and PPE, Blake said, but in order to access them, a hospital needs a certain number of positive COVID-19 tests.

“The challenge would be if you’ve got a lot of community members coming in and people that you’re testing for a smaller facility, we could run out of supplies before there are enough reported cases to allow us to access the emergency stockpile,” she said.

Those at the hospital are also extensively tracking how much they’re spending in response to the virus, Blake said, in hopes there will be reimbursement for the financial stress this will put on the hospital. In this kind of situation, facilities may be able to receive emergency reimbursement, she said.

But she doesn’t know where the money will come from, or when.

“No one’s able to tell me yet what that’s going to look like. … I've been asking and it's not clear,” Blake said. “I haven't heard anything about even the philosophy around how that money gets dispersed, but I'm trying to raise a voice for rural.”

While the state Legislature passed House Bill 2965, which provided $175 million to fight the outbreak, there has been no dedicated clearance for use in rural communities.

Blake said it won’t take as much financially to help these smaller facilities, but that money will make a world of difference in terms of sustainability.

“So many of these small facilities operate on a pretty thin margin,” Blake said. “I don’t think it’ll take too long for expenses to get to a place where we really are going to need some reimbursement.”

At Pullman Regional Hospital, a critical access hospital, infection control nurse Diane Whittick said the hospital already had an alert system set up to call in staff in case of large incidents. The hospital is unique, however, because it is used to staffing large events, like Washington State University football games. Its PPE stocks are sufficient for now, in what it calls a “pandemic stock,” an excess of supplies locked away for emergencies.

Whittick said the hospital has seen only about four people sent from primary care physicians with concerns of COVID-19 symptoms, but they didn’t meet the recommended CDC criteria for testing with a kit.

That criteria state a patient must have fever or shortness of breath with known exposure to a confirmed COVID-19 person, or fever and shortness of breath, with travel in the past 14 days to China, Italy, Iran, Japan or South Korea. If patients present with a severe respiratory illness that can’t be explained by other diagnoses, such as flu, then they would also be tested for COVID-19, Whittick said.

“Although the COVID-19 situation is scary, and it is evolving and emerging, we still continue to have reports that most cases will be mild and that the hospitals are bracing for the more critical patients,” Whittick said.

Like other rural hospitals, Pullman Regional is keeping in regular communication with its community: It meets weekly with WSU and the Department of Health, as well as attending meetings with the police chief, fire department and the local ambulance service. Internal weekly meetings occur with all the hospital’s department heads.

In Ellensburg, Kittitas Valley Hospital CEO Julie Petersen has designated an entire building on its hospital campus as a pop-up clinic where it will route all potentially infected patients. The hospital is fortunate to have the clinic building just recently available, when it moved its family practice to a new building off-site.

On March 7, the hospital opened the clinic, where the staff has been seeing between 20 and 50 patients per day and fielding twice as many phone calls. As of March 15, they’ve sent 142 kits out for testing.

Patients will be sent directly to one of two examination rooms, so they’re not waiting with others in the lobby. Isolation supplies sit in a metal filing cabinet outside the exam rooms so providers can gear up before seeing those patients. Three more exam rooms, blocked off from the rest of the building, will be used in case of a patient surge. The building has 22 exam rooms total, but the team hopes five will suffice.

They’re also considering following King County’s model of drive-by testing, in which they would host in the parking lot. The hospital's Cle Elum clinic has a health department trailer that it said could serve the same purpose.

Petersen said she’s seeing all her departments ready to fight an outbreak. When she visited the materials management department, which handles orders and inventory of supplies such as PPE, she was told: we got it, we already covered it. When she made rounds to the nursing departments, it was: we know what we’re doing, we’re fine.

The hospital has an adequate supply of N95 masks on hand, but its latest shipment of isolation masks had only 74% of its order.

“Shortages — just because it’s a global shortage — is really top of mind for us. We’re very concerned about that,” Petersen said. “Believe me, we’re getting very conservative about how we use our supplies.”

If the hospital receives an influx of patients, it would have to consider cutting services, an option that could decimate the bottom line.

“If PPE inventory does become an issue, or even from an infection control perspective, we decide that it’s in the best interest of the community for us to stop doing elective surgeries or close our specialty clinics — that becomes a real drain,” Petersen said. “That’s our financial life’s blood. I would hope that Congress would recognize that as we move to being emergency facilities, it’s really going to impact some of our clinics and our revenue sources.”

Larger hospitals can flex staff up or down according to need. But critical access hospitals such as Kittitas Valley don’t have that luxury.

“If we were to have eight or nine exposures among our clinical staff, that would be really, really difficult for us to backfill, because we just simply can’t reach out to the hospital next door,” Petersen said. “If those people start getting sick or get exposed, you quickly run out of people. That’s really my biggest concern.”

Dr. Kevin Martin, Kittitas Valley's chief medical officer and a family physician, said while the hospital is prepared, Eastern Washington is seeing only the beginnings of the spread.

“There is a very real suspicion that when this is all said and done, and we have the advantage of hindsight, we'll find that this virus has been here for months, and just simply wasn't recognized,” Martin said. “I keep reminding folks that the 97,000 cases worldwide [at time of the interview] are probably the tip of the iceberg because those are the ones that were sick enough to seek care.”