As coronavirus spreads, a Seattle politician with MS feels vulnerable

Councilmember Debora Juarez has a weakened immune system and is keeping herself in ‘semi-quarantine.’ 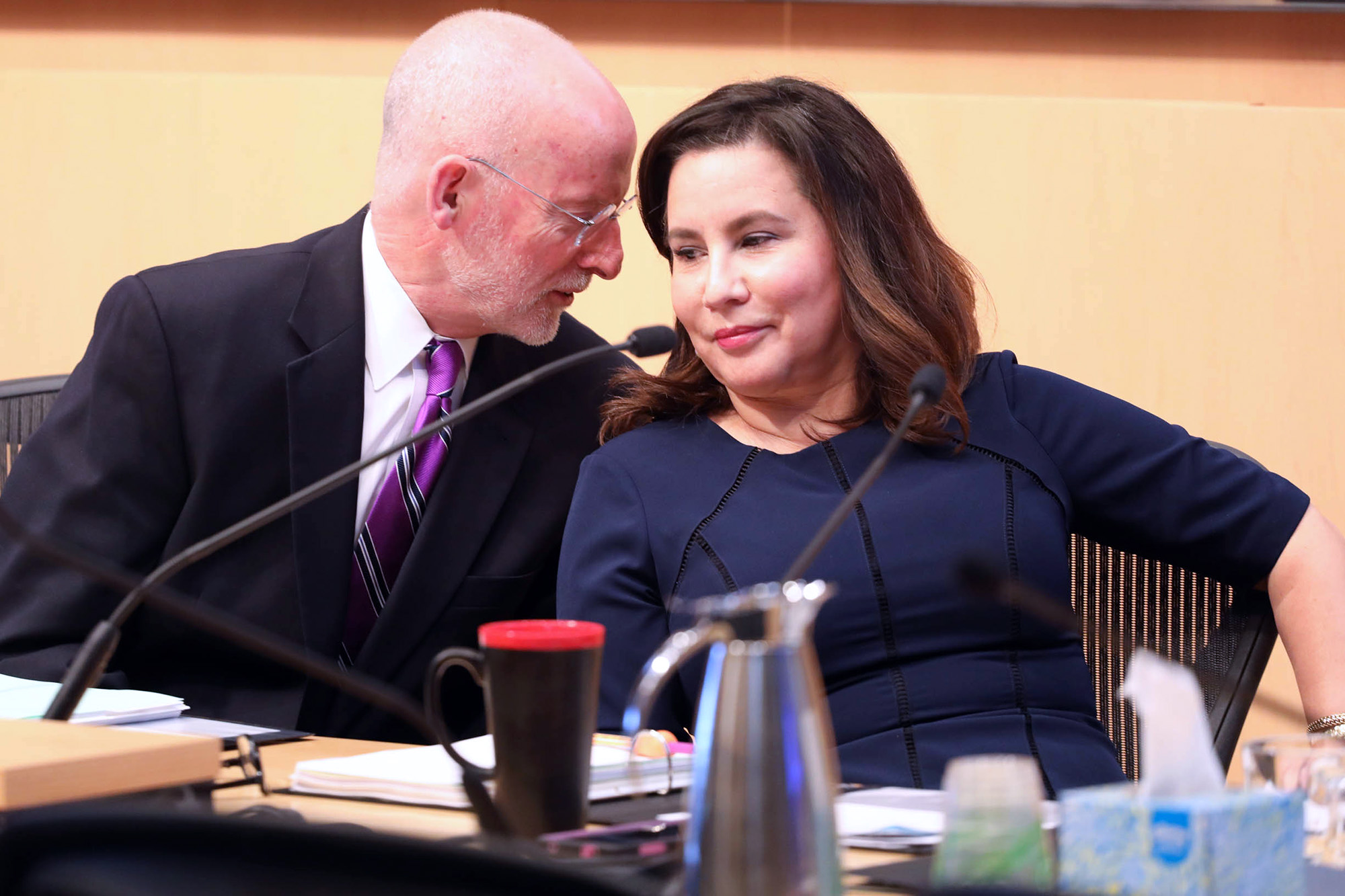 Seattle City Councilmember Debora Juarez, right, speaks with then Councilmember Tim Burgess during a meeting in 2017. Juarez is running a fever this week, and coupled with a suppressed immune system caused by medication she takes for multiple sclerosis, has elected to go into a self-imposed "semi-quarantine" for fear of contracting COVID-19. She hasn’t been tested for the virus as of yet and plans to work from home until her fever recedes. (Matt. M. McKnight/Crosscut)

Debora Juarez is feeling vulnerable and a little bit trapped.

The Seattle City Council member has multiple sclerosis, and for the past several days she’s been ill. Juarez, who was recently elected to her second term in office, has battled a low-grade fever and, for a few days earlier this week, a mild cough.

During the coronavirus outbreak, when such symptoms are cause for concern in anyone, Juarez’s weakened immune system — suppressed by the medication she takes for her MS — has added an extra layer of anxiety for the blunt-spoken council member.

“I never thought in my lifetime I’d be in this position,” she said over the phone. “There’s a weird duality here: passing laws and doing all this crap, but paying attention really closely for myself as well.”

For now, Juarez is staying home — or “semi-quarantined,” she said. She phoned in to a special meeting of the city council Thursday to cast her vote in favor of declaring a civil emergency. She hasn’t been tested for the virus.

What’s next for Juarez is unclear, however. She said she’s feeling guilty for not being present in the office and was hopeful she could return to City Hall by Monday. The fever is receding, she said.

At the same time, her staff has pushed her to stay away for at least a week. Her colleagues on the council — in particular Councilmember Teresa Mosqueda — have checked in with her as well, urging caution.

Juarez, 60, has grappled with chronic MS for more than 20 years and has also survived several bouts of cancer. But as the city she represents struggles to contain the outbreak of the deadly coronavirus, the uncertainty of its spread — who it affects, how far it will travel, what can prevent it — has put her in a particularly uncomfortable position.

As an elected official, it’s her full-time job to manage a crisis with undefined borders; as a Seattle resident considered vulnerable to the COVID-19 illness by local public health officials, her job is to stay healthy.

On Wednesday, officials with Public Health — Seattle & King County issued new recommendations for containing the virus, including that people who have weakened immune systems should stay home and avoid gatherings of people.

Those recommendations would seem to apply to Juarez.

But the recommendations are just that — recommendations — and the point at which people like Juarez isolate themselves is proving a difficult balance between paranoia and reality.

Juarez was diagnosed with MS in 1999 after she collapsed and was raced to the hospital. The symptoms of the disease — in which a person’s immune system attacks the body’s nerve fibers — vary widely among people and even between months and years for an individual.

Public health officials across the globe are still working to sketch the traits of the novel coronavirus and whom it affects the most. While in the same class of virus as the common cold, it’s proven both difficult to contain and far more deadly than the flu. Worldwide, over 3,000 people have died from the illness. On Thursday, state health officials said 11 people had died in Washington state, a number that increases by the day.

The vast majority of cases will be mild. But older adults and people with underlying health issues and suppressed immune systems face serious risk.

For two years, Juarez walked with a cane, but doesn’t anymore. She’ll feel tired and lightheaded sometimes. But if she’s hampered by the condition, it’s not obvious in her day-to-day presence on the council. Her reputation is one of being direct, more so than one might expect from a Seattle politician. From the council dais, she’s quick to counter slights — perceived or real — from colleagues or the public. And as other elected officials hem and haw about their futures or ambitions, Juarez has been clear since she was first elected that neither this job nor politics in general was necessarily her ultimate ambition.

Juarez is an enrolled member of the Blackfeet Nation and her father was first generation Mexican American. An attorney, she worked for multiple governors on tribal issues in the state and represented tribes in private practice law. She was also a pro-tem judge in King County Superior Court and Seattle Municipal Court.

Elected to the council in 2015, Juarez has found herself a representative of the more “moderate” wing — at least relative to her colleagues — who’s more apt to align with Mayor Jenny Durkan than socialist Councilmember Kshama Sawant.

As the city council shifted to district representation, no member of the council came to represent loyalty to her constituents more than Juarez — whose pride for District 5 in North Seattle colors nearly every public appearance.

On Tuesday, she chaired her committee meeting as usual. But she wasn’t feeling well and realized she should go home. She’s since cleared out her schedule, in particular any public events.

Juarez is still working from home, taking phone calls and working through her stack of papers. As she does, she said she’s trying to remain disconnected from her own anxieties.

“It’s kind of weird to be in the planning — thinking about the elderly, having conversations about not closing down the school district, passing proclamations, reading what the governor wrote and reading resolutions — and at the same time thinking, ‘They’re talking about me.’  ”