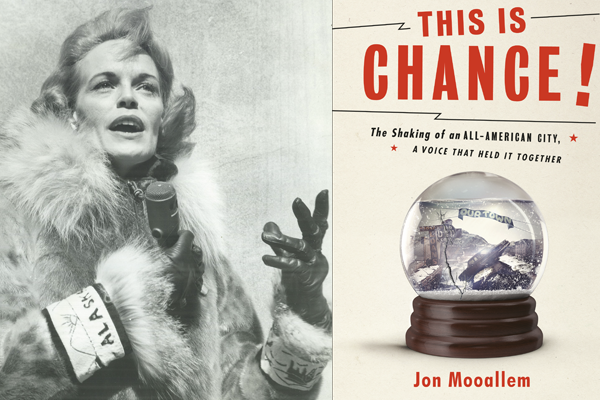 Genie Chance was an up-and-coming reporter at KENI in Anchorage when the Great Alaska Earthquake hit in 1964. (Photo courtesy of Jan Blankenship)

What can a new book about the Great Alaska Earthquake teach us about surviving coronavirus? Local author Jon Mooallem weighs in as part of my latest update on arts and culture amid COVID-19.

If you subscribe to Jon Mooallem’s podcast “Walking,” now in Season 2, you know it’s just as advertised: “No talking, just walking.” The Bainbridge Island-based writer (for New York Times Magazine, “This American Life” and elsewhere) simply records himself taking an hourlong walk through the woods near his house. The result is a pleasantly paced crunching of dirt and leaves, breathing with occasional birdsong. (Consider subscribing to supplement your own get-me-out-of-this-house walks.)

The March 24 episode was going to be different: it was release day for his new book This Is Chance! The Shaking of an All-American City, A Voice That Held It All Together. Mooallem spent six years researching the book, which examines the 1964 Alaskan earthquake — 9.2 on the Richter scale, felt as far away as the Space Needle — and the crucial role that young Anchorage radio reporter Genie Chance played in keeping the shell-shocked community connected. On release day, Mooallem was supposed to be celebrating with a reading at the Strand Book Store in New York City, kicking off a multi-city tour. But instead he was quarantined at home, on an island, so he took his usual forest walk. The entry for that podcast episode reads: “This walk is my book tour.” 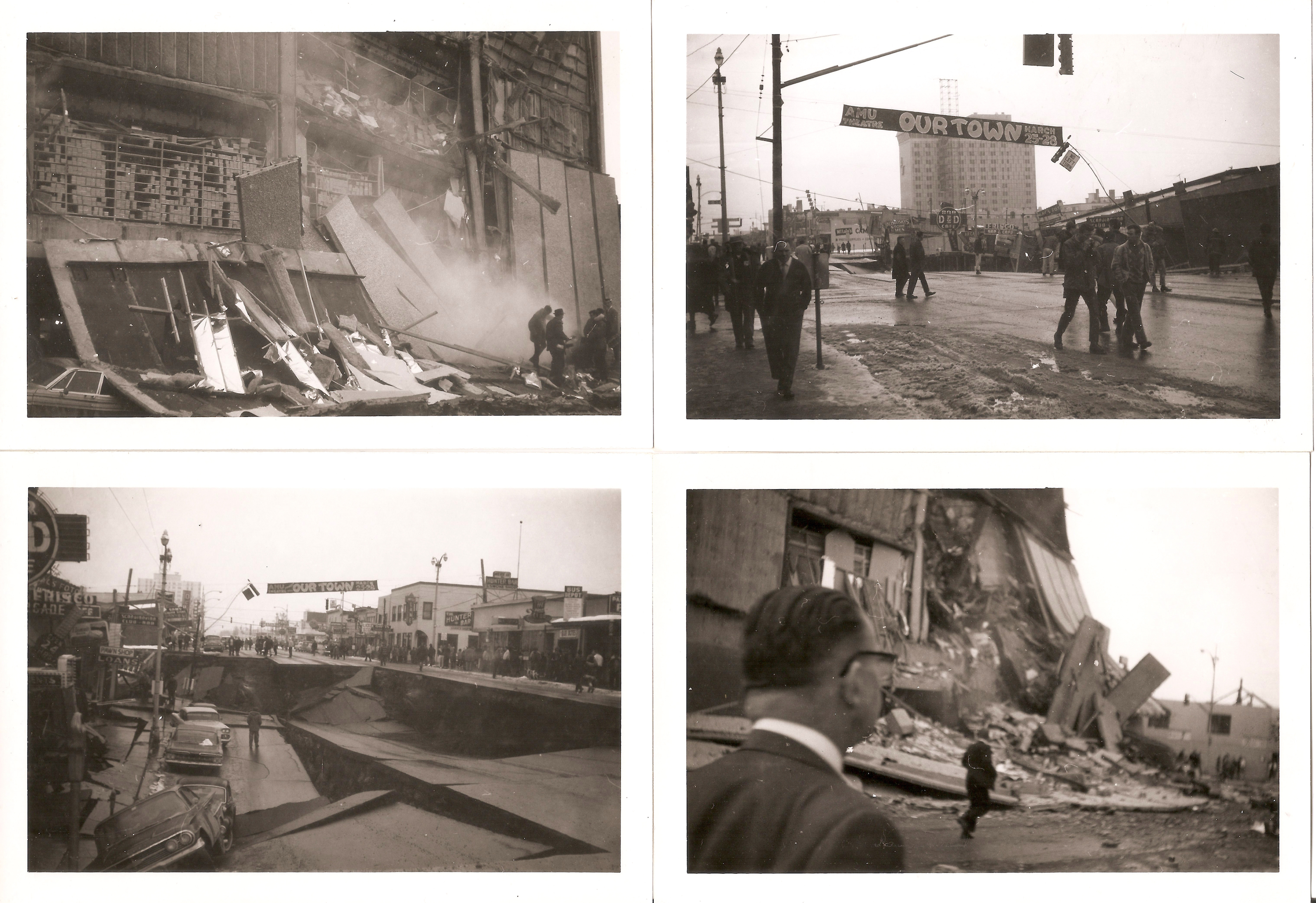 Genie Chance shot these photos of downtown Anchorage right after the earthquake, which she experienced with her son in their car. (Courtesy of Jan Blankenship)

Genie Chance shot these photos of downtown Anchorage right after the earthquake, which she experienced with her son in their car. (Courtesy of Jan Blankenship)

’Tis the season of the creative pivot. Coronavirus has proved itself the ultimate in “cancel culture,” sending local artists scrambling for Plan B. Mooallem, for example, says he’ll be doing at least one livestreamed reading (Mar. 30, 7 p.m. on the Facebook page for San Francisco’s Booksmith).

Seattle musician Tomo Nakayama, whose new record Melonday launches April 7, lost several gigs leading up to the release. Instead he’s promoting the album via livestream concerts, and a lo-fi music video for his song “Tick Tock” — featuring a wrinkly white sheet as the set — “to pass the time while I’m stuck in my house and going a little stir crazy,” he wrote on Facebook.

Meet Your Maker: Dan Hurwitz talks comedy in a time of coronavirus

Instead of painting in public spaces, muralist Aramis O. Hamer has invited us into her studio for tutorials on how she achieves the “black girl magic” that radiates from her canvases. If you find Bob Ross soothing, wait ’til you hang out in the color-splashed A.O. Studio and paint a goddess with blue locs or the perfect gold earrings. I can’t paint so much as a stick figure, but I find just listening to Hamer talk about her palette and plants releases all the right endorphins.

Even the beloved cherry blossoms on the University of Washington campus have pivoted, flaunting flowers via webcam this year. No, you can’t gaze up from under their boughs in person. But in the view from the livestream — pink-peppered branches slowly swaying in the breeze — the trees appear to be keeping a soft vigil. Earlier this week I spent a surprising amount of time watching a lone seagull poking around the grass. The bird kept looking around as if to ask, “What the hell happened to this place?”

It’s a question we’re all asking in our suddenly emptied streets. The citywide vibe is one of stunned uncertainty. That may be why readers are latching on to Mooallem’s book about the largest earthquake in recorded U.S. history for reasons he never could have anticipated. “I’m hearing from people that it’s reassuring to read about something catastrophic in history, and how people came through it,” he told me over the phone. “The details are so different, but the themes are similar.”

This Is Chance! is structured over the weekend of the earthquake, with events relayed in the voices of those who experienced the massive destruction in the moment. The townspeople’s reactions unspool as if in real time, thanks to Mooallem’s incredibly thorough research, which included boxes of documents Genie Chance hung on to in hopes of writing her memoir. (Early-onset dementia ruined that plan.) The confusion and disarray in those first post-earthquake hours is palpable. Some people believed Anchorage would be back on its feet in no time; others believed the town and its lifestyle were forever changed. Sound familiar?

Notes from a pandemic: Washington writers respond to coronavirus

Despite the fact that their world had become unrecognizable, people immediately leapt into service, even in the absence of an overarching plan or knowledge of when the next aftershock would hit (and there were some major rumblers). Locals proudly deemed “pitching in” a particularly Alaskan trait, but sociologists researching that earthquake and many disasters since have found that stepping up to help in times of sudden upheaval is a human instinct. Mooallem says he’s seeing the same thing in the response to coronavirus.

“We have a surplus of help — from the people who are delivering mail, selling groceries, even doing the smallest things,” he says. “People doing Instagram Live art lessons for kids, or sewing face masks, distilleries shifting to sanitizer. That’s all part of the impulse seen in the book.”

I read an advance copy of This Is Chance! well before the word coronavirus appeared in every headline. Even then it was encouraging to read about people — in particular a go-getting woman reporter in 1960s Alaska — staying strong in the face of catastrophic upset. Now, the book seems prescient in its reminder that we will muddle through, even when it feels like our foundation has been rocked.

Get weekly updates from Brangien about the shifting landscape of local arts amid coronavirus. Subscribe below. 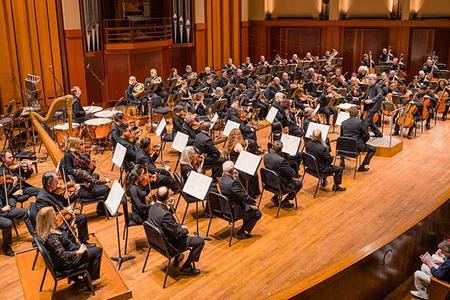 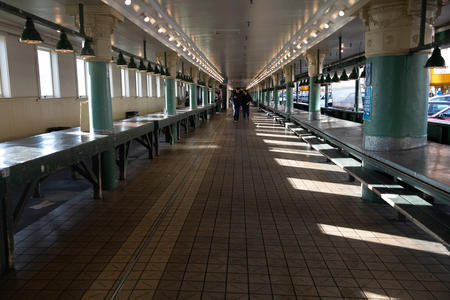 Notes from the pandemic: Washington writers respond to coronavirus

Anastacia-Reneé, Claudia Castro Luna, Kristen Millares Young and others on life at the national forefront of a global health crisis.

Notes from the pandemic: Washington writers respond to coronavirus

Anastacia-Reneé, Claudia Castro Luna, Kristen Millares Young and others on life at the national forefront of a global health crisis.