The Georgetown Steam Plant was built in 1906 to power the city’s electric streetcar. Having been dormant for decades, the 20,000-square-foot space is being converted into an innovative center for arts and science education, immersion and performance. (Matt M. McKnight/Crosscut)

An industrial Seattle landmark is getting a dramatic new lease on life. The 114-year old Georgetown Steam Plant — constructed in 1906 to power the city’s electric streetcar and Tacoma-bound railway lines — will become a state-of-the-art education, science and arts center, to open in three to five years.

Seattle City Light, which owns the local and national historic landmark, is working with a newly created nonprofit partner to revamp, manage and oversee programming at the Steam Plant. Called The Georgetown Steam Plant Community Development Authority, the organization is slated to sign a master lease (25 years with two 15-year extensions) with Seattle City Light this spring or summer, which will require approval by the City Council.

The cost of rehabbing the new arts center and museum is estimated at $10 million, which the nonprofit will cover.

The steampunk wonderland, a high-ceilinged labyrinth of gigantic turbines, transformers, metal bridges and boilers, sat mostly unused for years after being decommissioned in the 1970s. City Light started offering visitors a glimpse into the plant’s inner workings in 2014, opening its doors to the public for four hours a month. The plant has also functioned as the stage for quarterly art performances, including dance, immersive theatre and a concert by the Seattle Phonographers Union.

Having already served as an occasional museum and arts venue, Georgetown Steam Plant 2.0 will be all of this and more, year-round.

“It’s going to be a bona fide museum in the Georgetown neighborhood,” says Julianna Ross, Seattle City Light’s community program developer for Georgetown Steam Plant. Wedged in between I-5, the Duwamish Waterway and downtown Georgetown, the (mostly) white, neoclassical exterior of the building stands out among its industrial neighbors and the planes sitting idle on Boeing Airfield’s runway. It's like a frosted sheet cake with a dark and gritty filling.

Sam Farrazaino, creator and developer of the sprawling art studio complexes Inscape Arts (in the former INS building) and Equinox (in Georgetown), is shepherding the new center’s ambitious vision under the umbrella of the new nonprofit. Eventually the nonprofit will manage programming and day-to-day operations of the new arts and science center, as well as minor maintenance of the building. Farrazaino projects the new center will employ six full-time staff members to lead operations (administration, repair and maintenance), plus museum and event staff.

“I want to do as much stuff as possible to get more people in here,” says Farrazaino, who describes the new Steam Plant as an “industrial cathedral” where people will be able to “set their imaginations on fire.”

Farrazaino's vision for the space is grand: a museum for tourists, history buffs and students who want to examine the turbines and engineering feats up close; a hub for STEAM (Science, Technology, Engineering, Arts and Mathematics) education; and a community arts center with regular events, performances and artist residencies. He adds that the plant’s 20,000-square-foot interior will stay mostly the same — raw — with no stages or permanent seating to be added. The revamped plant’s audience capacity will be roughly 700 people.

The building’s upgrades, which would improve accessibility and seismic safety, should cost the nonprofit at least $10 million, Farrazaino says, an amount he plans to raise via philanthropists and public fundraising. Renting out the plant as an event venue for nonprofit fundraisers and weddings could help pay operational costs later on, he adds.

Some major renovations, spearheaded and financed by Seattle City Light, are already planned or underway. The building’s concrete exterior is currently being restored, and the roof still needs to be replaced. City Light is footing the bill for such improvements with the help of preservation grants.

Meanwhile, the Steam Plant will stay open for visitors once a month, as Farrazaino’s team slowly ramps up programming and fills in the contours of the plan ahead of the plant’s grand (re)opening. Farrazaino says he hopes to work with a long list of local partners, like Reel Grrrls, the feminist filmmaking nonprofit; the Duwamish Nation; Georgetown galleries such as Studio E and Oxbow; as well as the Technology Access Foundation.

Arts Corps will establish a space for arts education on the site, which will be the key location of its Learning Immersive Tech program, offering classes in game design as well as augmented and virtual reality. Arts Corps students will also create a virtual-reality experience for Steam Plant visitors.

ECOSS aims to make the building and its surroundings greener by installing cisterns, rain gardens and vegetated walls, which could catch and manage rainwater coming from the building’s roof. ECOSS also plans to add native plants to the surroundings.

At the turn of the 20th century, the Georgetown Steam Plant was one of the first reinforced-concrete buildings on the West Coast. Today the building is heralded by engineer-historians for containing the last known intact, in-place examples of Curtis vertical steam turbines — cutting-edge technology at the time — in the world.

For such a historically important landmark to become an interactive art and community space (rather than a stuffy museum where everything is roped off or behind glass) is rare, says Kji Kelly of Historic Seattle. His nonprofit is helping with the preservation side of the museum’s revamp.

“Oftentimes you see the preservation of this type of facility in a museum-type atmosphere,” Kelly says. Here, instead of pressing against security ropes, visitors can pop on VR goggles.

“This isn’t your grandmother’s house museum," Kelly says. "It’s going to feel like a living, active, breathing machine. That’s what’s so special about it.” 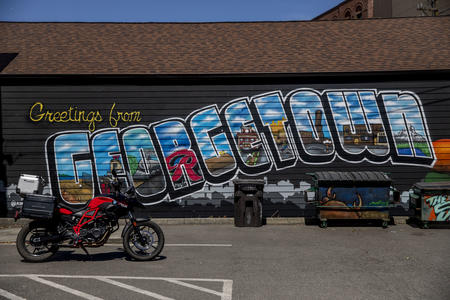 Farms in Central Washington boost their yield with solar energy

Two greenhouse domes on the Colville Reservation will house the state’s first 'agrivoltaics' project, where food and electricity can grow in tandem on small acreage.