Gov. Jay Inslee's approach will be key to fighting COVID-19

As coronavirus deaths mount in Washington state, the governor hasn't been particularly front and center. 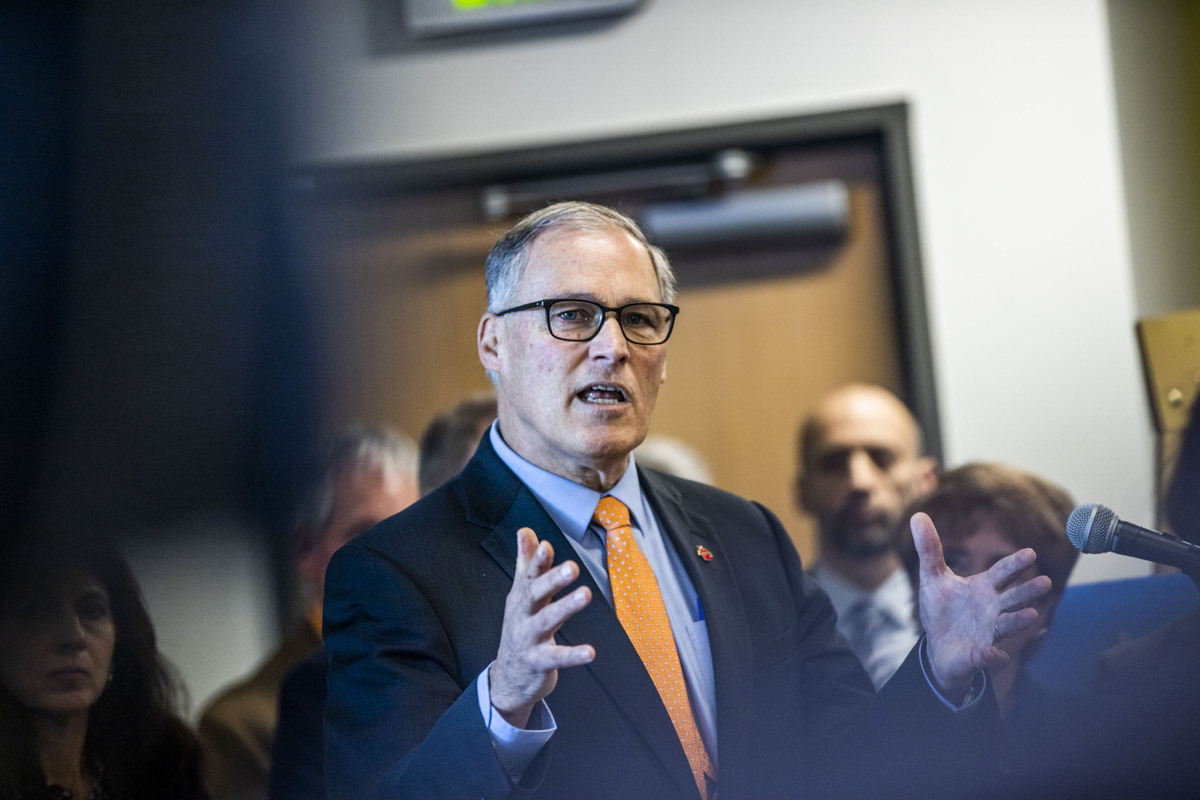 Washington Governor Jay Inslee during a press conference at the Smart Buildings Center in Seattle on Monday, Dec. 10, 2018. (Dorothy Edwards/Crosscut)

Washington state is on the frontlines in that fight, which Dr. Tedros suggests has to be carried out in the way that each country sees fit. And, in this country, much of the decision-making will depend on whatever each state sees fit.

Gov. Jay Inslee came home from the political craziness of Washington, D.C., eight years ago to run for his current office. He said he wanted to make a difference for his home state. He's certainly got the opportunity now — and how aggressively he responds may determine whether the state comes out of the coronavirus epidemic without widespread, major loss of life.

Read more: Before coronavirus: How Seattle handled the Spanish flu

As much as health officials want to project calm, there are reasons to worry that they are already under stress. On Tuesday, Chris Spitters, the physician heading Snohomish County's public health office, told the New York Times, "Really, we are kind of having to triage our efforts."

Dr. Spitters didn't provide much detail, but less than a week into the crisis, that's a serious red flag. And it takes someone with the clout of a governor to find out exactly what everybody needs — in Snohomish, King and Spokane counties — and anywhere else the illness breaks out.

In addition, the Fred Hutchinson Cancer Research Center scientist who produced an estimate of nearly 600 cases already in the area thinks Seattle could see explosive growth if we don't intervene forcefully. "Now is the time to act," Trevor Bedford told the health publication STAT. Bedford pointed to the slow response in Wuhan, China — where the virus first broke out — as a sign of what could unfold if we’re not careful. (Nearly 3,000 deaths have been reported in China thus far; fortunately the number of new infections has started to slow.) The article suggested canceling large events quickly.

It must be said that, for a person who was campaigning to be the whole nation's leader several months ago, Inslee hasn't been particularly front and center as COVID-19 deaths mount here. Likely that's because local leaders in King and Snohomish counties are closer to the situation, and he probably trusts them. But Inslee, with his upbeat, ex-jock personality, can come off as a bit too laid back. And his D.C. days as a very liberal member of Congress often brought out his particular ability to skewer Republican opponents. Both tendencies could be serious issues in a situation where people need smart, balanced guidance.

His press conference on Monday in Olympia suggested Inslee is keeping his worst impulses at bay. He said the state was asking the federal government for release of some stockpiled medical protective equipment, and indicated that he was pleased with the Vice President Mike Pence's apparent interest in the request. When a reporter asked about the Trump administration's handling of the coronavirus, Inslee (whom Seattle Times columnist Danny Westneat rightly scored for a tacky response to Pence not long ago) avoided taking the bait.

The governor offered quite a bit of advice, but some of it was more specific than most of what health authorities are offering. While saying it wasn't time to cancel large public events, he made a point that those with health issues might want to make their own decisions to avoid big crowds. He also indicated that people should expect local school closures, which has already happened in some districts.

Still, when it comes to ordering any new measures, he is taking a gradualist approach, looking on "a daily basis," as he put it Wednesday in a KIRO Radio interview. He said that he's getting people used to the idea of bans on large gatherings, school closures and maybe even restrictions on work. But he hasn't pulled the trigger.

While it's a plus that Inslee has a long record of following science, especially on his signature climate change efforts, there's a lot that is still unknown about the SARS-CoV-2 virus that causes COVID-19. And he seems to understand that he may have to act without clear scientific direction. "There's no algebraic equation that could make this an easy decision when we cancel events or schools," Inslee said.

He said the decisions would be based on advice from scientists, the people who will be affected and a review of studies showing that "social distancing" measures like closures can have at least some beneficial effects on the spread of illnesses.

But he is clearly not jumping to broad action as a first response. As he put it Monday, "I can't reiterate enough how important individual decision-making is here."

It's clear, though, that a lot of people are ready for action as needed. They presumably don't want local or state leaders to panic, but they also don't want them to hesitate to act. On Saturday, as the first local death was announced, people were out at grocery stores buying up canned goods and hand sanitizer in anticipation of possible quarantines or even some broader shutdowns. And individuals have started online petitions seeking the closure of some school districts, including Seattle’s, and the University of Washington (the UW petition had some 18,000 signatures on Tuesday afternoon).

Part of what’s fueling public concern is how the epidemic has played out elsewhere. Chinese authorities initially dropped the ball, forcing extremely strict measures that now seem to be working. As the World Health Organization's Tedros said, “Based on the facts on the ground, containment is possible. But the window of opportunity for containing it is narrowing."

Inslee so far has emphasized individual precautions — staying home when sick and washing hands. "We can all be leaders in this effort against this virus," he said. "You don't have to be a senator or governor or president."

Of course, we have only one governor. He's in the best position to monitor the rest of the response in the state and, if he's not comfortable with what others are doing, to push for action before it's too late.

There are some who figure that widespread transmission of the novel coronavirus may not be all that bad and is inevitable. Inslee's quiet resolve has already shown he doesn't agree. The state he came back to eight years ago needs him to fight like hell to avoid that, even if it means uncomfortable, perhaps unprecedented steps.