Integrated Schools is a volunteer organization that aims to get privileged parents to opt for neighborhood schools with the benefit of diversity. 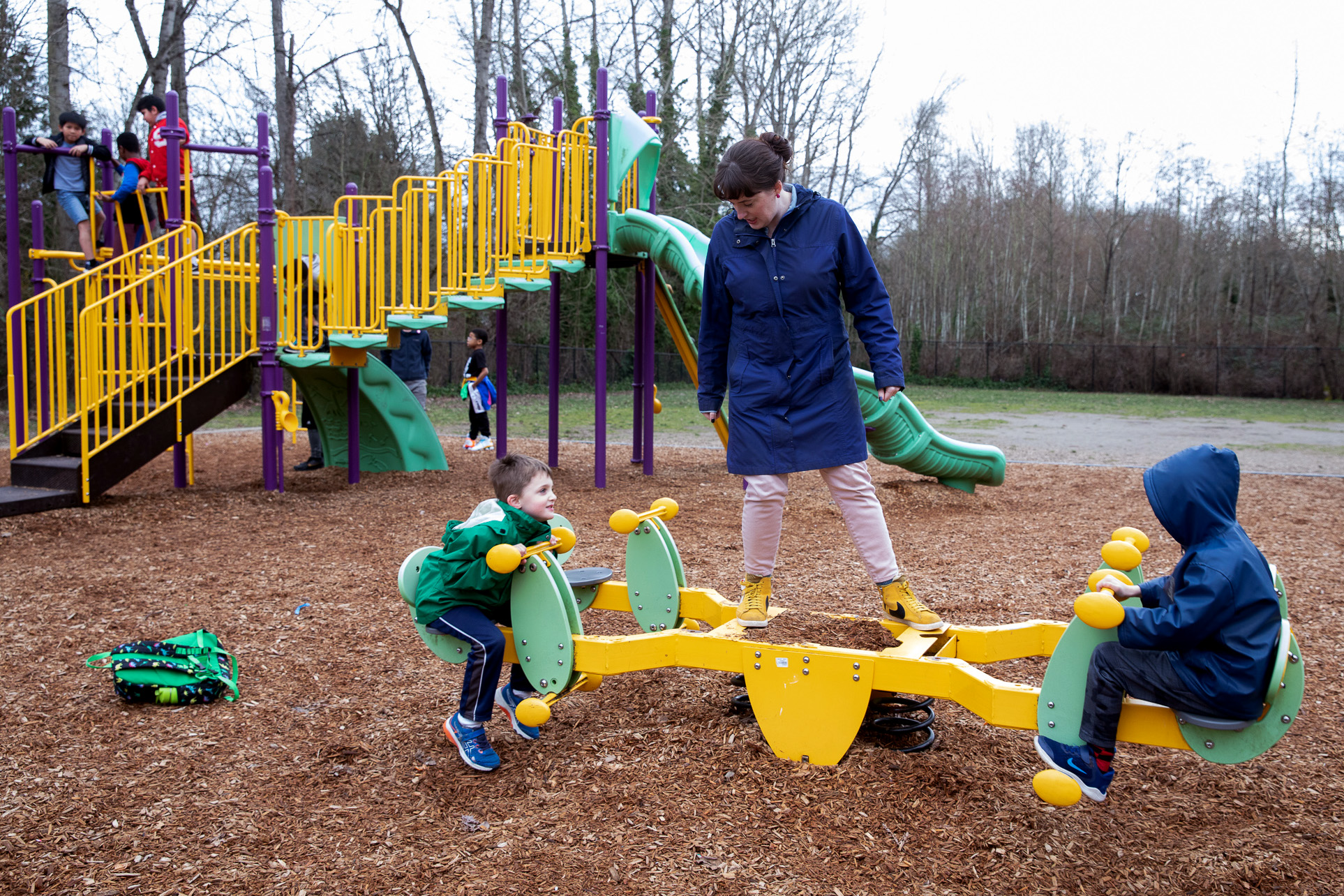 Katy Strange plays with her sons Theodore, 5, left, and Abraham, 7, on the playground at Rising Star Elementary School in Seattle's Beacon Hill neighborhood, during the afternoon of March 3, 2020. (Matt M. McKnight/Crosscut)

A phone call from a white mom led to a major course correction for Stephan Blanford, a Black man who served for four years on the school board of one of the least integrated school districts in the state, Seattle Public Schools.

Blanford and Courtney Mykytyn had a conversation far from the school board member at the time expected would be a 15-minute conversation with “another white woman who has a simplistic solution to a very complex problem.” Their chat turned into a two-hour conversation that included Mykytyn, who founded the nonprofit Integrated Schools in 2015, admitting that people like her are a big part of the problem.

“People don’t implicate themselves,” Blanford said. He could see that this white woman was willing to “put some skin in the game” and not just talk about school segregation in a theoretical sense.

Mykytyn learned some difficult lessons from her own family’s experience in Los Angeles and wanted to expand the conversation about school integration across the nation. When she and her husband were deciding where to enroll their children for elementary school, they realized none of their white and/or privileged friends were considering local public schools.

“It just felt wrong to me,” Mykytyn said. She and her husband opted to send their children to a dual-language program within their neighborhood public elementary school.

Mykytyn persuaded Blanford to focus less on policy initiatives and more on interpersonal relations, to integrate classrooms with buy-in from white parents and parents of privilege, the people who originally promoted segregation.

“What became really clear to me as a school board director is that Seattle as a whole, and parents that I encountered, didn’t really have an appetite for conversations about integration,” Blanford said. The message he heard from many people was, “what can you do for my kid?” and not “what can you do for all kids?“

That phone call ignited more than two years of intense work between Blanford and Mykytyn, who died Dec. 30 in a tragic accident. Blanford eventually became Integrated Schools’ board chair and along with volunteers across the country continues the work of the organization, which has grown to 17 chapters. Some of the information for this story was gathered during phone and email conversations with Mykytyn in November 2019. 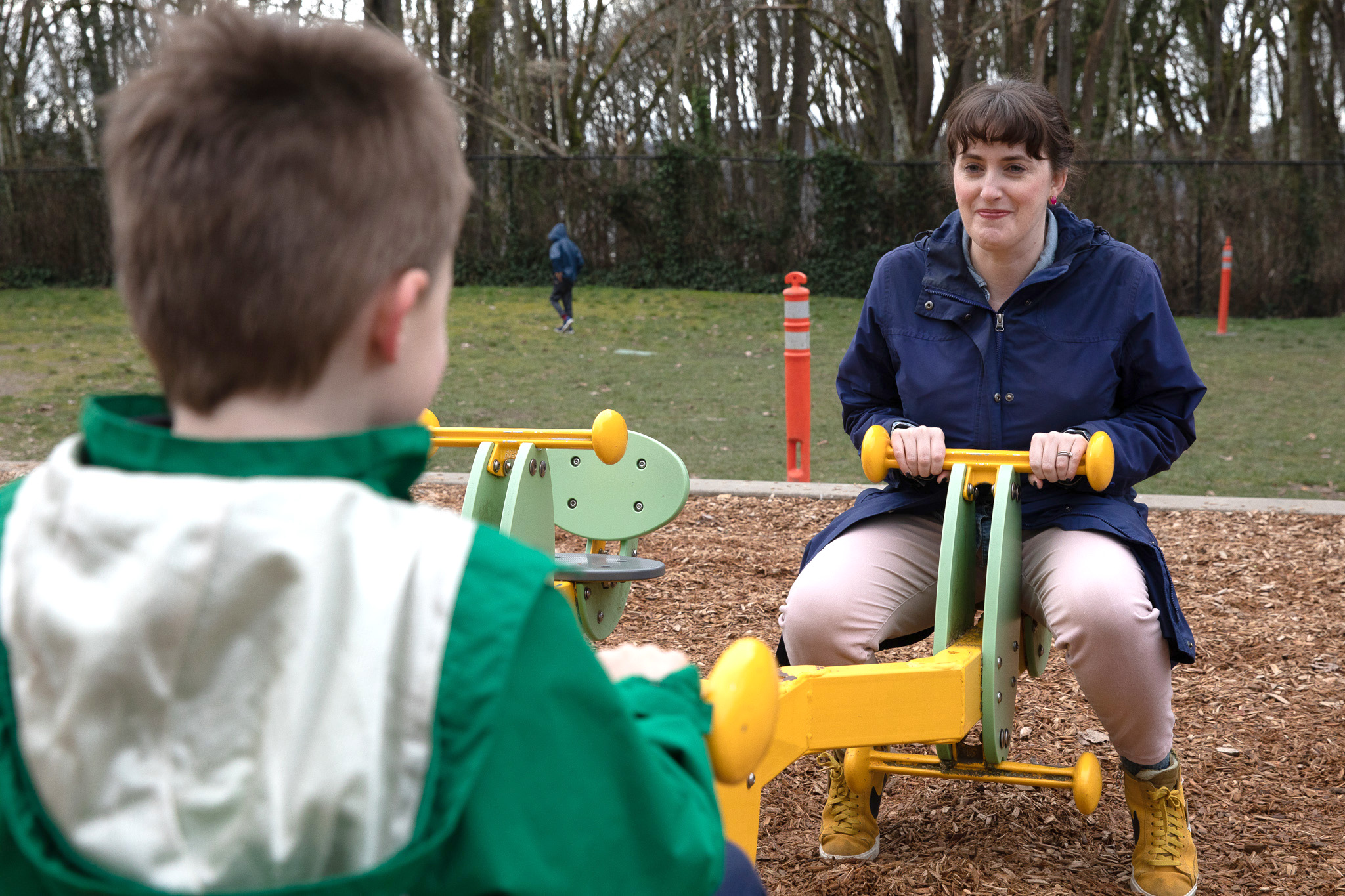 Blanford became disheartened during his four years on the school board. After campaigning on closing the opportunity gap, he wasn’t able to make progress. The opportunity gap actually increased during his tenure. According to a 2016 study from the Stanford University’s Center for Education Policy Analysis, Seattle ranks fifth for worst opportunity gap in the nation between black and white students. It also ranks worst in the state. The Seattle Times reported that approximately one-third of Seattle’s public schools are whiter than the city itself. Seattle is 66% white, according to the most recent census data, and 17% percent of Seattle public schools are 90% nonwhite.

“Schools are segregated because white people want them that way … maybe not in what we say, but through our actions it’s what we’re conveying,” said Ali McKay, the Seattle chapter lead of Integrated Schools.

In response to the district’s mandatory busing policy between 1978 and 1998, many white and privileged families left public schools in favor of private schools, or moved their children into magnet schools. Overall, district enrollment  shrank from approximately 120,000 at the start of mandatory busing to over 53,000 as of 2020. Nearly a quarter of Seattle students are enrolled in private schools today.

When mandatory busing ended, the district allowed students to attend any school they wanted, as long as there was room. To promote integration, the district used race, among other criteria, as a “tiebreaker” for enrollment in popular schools. This practice was challenged in 2007 with the U.S. Supreme Court case, Parents Involved in Community Schools v. Seattle School District No. 1. The lawsuit was originally brought against the Seattle School District by a group of white parents who were upset that their children could not attend Ballard High School and instead were sent to Franklin High School. The Supreme Court ruling ended the “tiebreaker” practice.

According to Blanford, the 2007 ruling stripped the district of tools it could use to address integration. That, coupled with what he saw as Seattle’s “passive progressivism,” made it clear there is “a cognitive dissonance between parents’ values and actions.”

He is troubled that Seattle didn’t do anything to push back against the Supreme Court decision, unlike Louisville, Kentucky, which faced a similar parent lawsuit, but today is considered one of the most integrated districts in the country because of work done since the Supreme Court.

“If there’s a perception of a percentage of kids of color at a school, then it’s perceived to be not a good school,” Blanford said.

People involved with Integrated Schools’ Seattle chapter are pushing back, encouraging parents to do their own research and not just follow the trend against integration based on school rankings.

McKay, the Seattle chapter lead and a white mother of two, pulled her eldest child out of the neighborhood elementary school, a 75% white school in Seattle’s affluent Madison Park. In 2016, they toured a Title 1 school on Seattle’s Capitol Hill that is 24% white. Attracted to the school’s vision plan, which would better accommodate their child’s vision impairment, they decided to enroll. They were impressed with what it had to offer their family, not just in terms of racial diversity but in special education and the fact the school educated a high percentage of English language learners.

Katharine Strange, a white mom and participant in the Seattle chapter, learned just how segregated Seattle is after moving to the south end and enrolling her children at Rising Star Elementary, a Title 1 school in South Beacon Hill. Unable to afford a home in North Seattle, she and her husband bought a home in South Seattle and really liked how vibrant and diverse the community was. However, the messages they heard from friends and family were “astonishing,” as Strange put it. “I always thought Seattle was a very progressive place,” said Strange, who is originally from Montana.

There were concerns for their safety and they were frequently told that they would have to send their kids to a private school.  “There is so much misinformation,” she said.

Contrary to those messages, Strange said her family is very happy with their school. “I wish people could see the school that I see.”

“I’m not going to sacrifice my kid on the altar of social justice”  is something McKay hears a lot when talking to other white and/or privileged parents about her school choice.

She doesn’t feel like she’s sacrificing anything. She acknowledges they may not be getting the same enrichment activities, but she doesn’t feel her kids are any worse for it.

She believes parents who are overly focused on getting their kid into Harvard are overlooking the long-term benefits of a more integrated classroom, like reducing racial bias, creating meaningful relationships among kids of different backgrounds, increasing the likelihood kids will seek integrated settings later in life. Benefits that are highlighted in The Century Foundation’s comprehensive report, “The Benefits of Socioeconomically and Racially Integrated Schools and Classrooms.”

As a school board member, the message Blanford heard from CEOs of some of Seattle’s major corporations was their desire to hire students from diverse schools. They are the people who know how to talk across race and class and can collaborate.

Jessie Huang-Refuerzo, a Filipino-American mother of two and PTA president at Rising Star Elementary, feels the large immigrant community at their school makes her children more open to different cultures. She loves that every month the school celebrates a different culture with speakers, dancers and other special events.

“Who knows what they’ll be doing in the future?” she said of her kids. “What kinds of people they’ll be working with? I want them to be culturally sensitive.... I work in Bellevue. So I primarily have seen how kids have grown up in an all Caucasian community and they don’t know other cultures.”

Huang-Refuerzo and her husband, Tim, both grew up in South Seattle and went to school during the years of busing. They believe being bused to West Seattle where there were more white families helped them to experience a different community from their own.

Tim said when he was bused to West Seattle, “it made me see a different picture ... a lot of kids now don’t see that.” 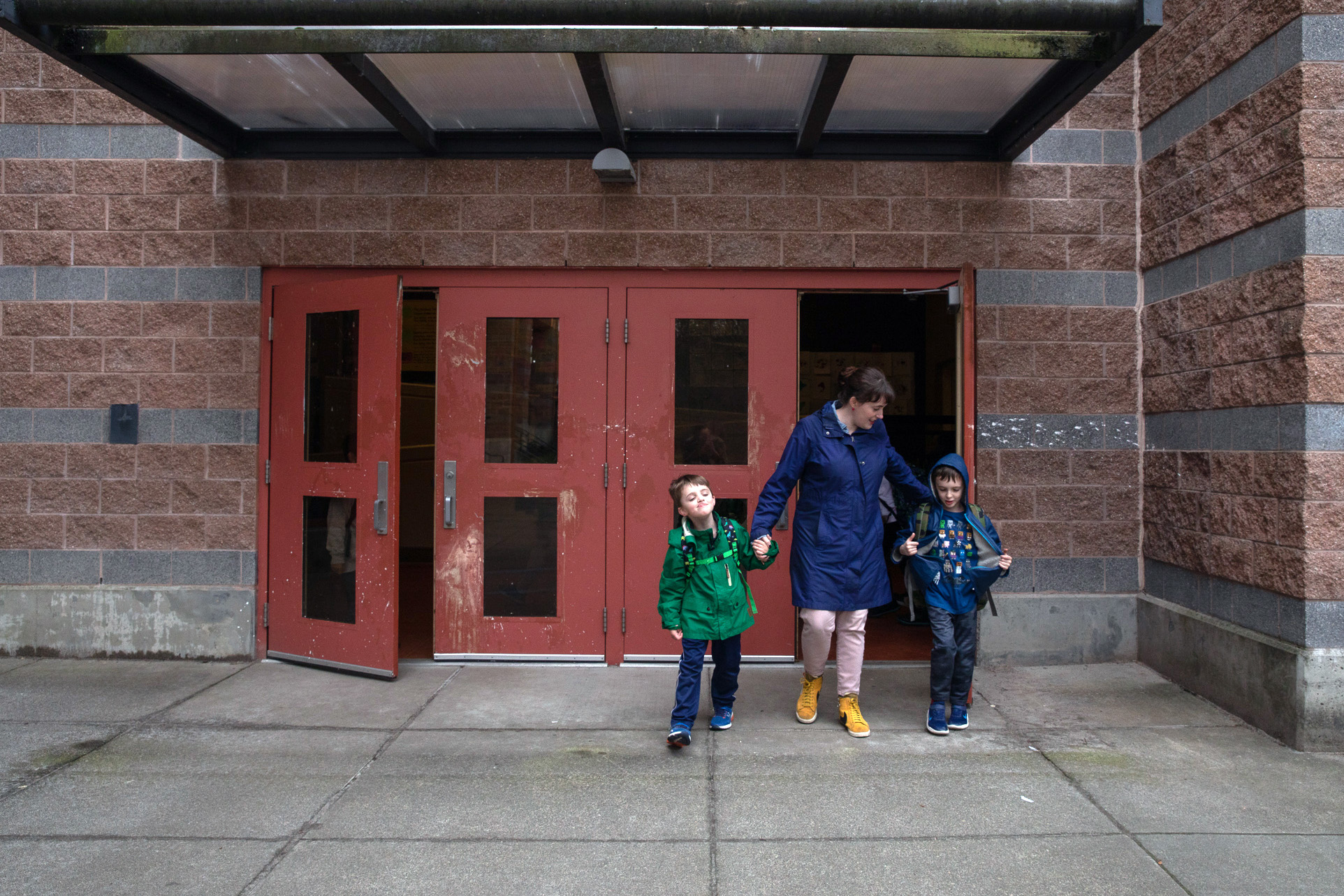 Along with encouraging parents to enroll in diverse schools, much of Integrated Schools’ work concentrates on how white parents present themselves in these communities. Or, as Blanford explains, “how to show up in a way that their forebears did not show up.” School desegregation often meant the firing of Black teachers and administrators in order to make room for white teachers and administrators. There was little regard for the successful systems and community that had been in place.

When talking about her experience as the only white mom on the school’s PTA, Strange admitted in an email, “I think a lot of what I experienced was my first time being a racial minority and learning to see my own [white] culture…. Basically, I have seen that it is very easy to roll in to a less privileged community and see all the deficits — they don't have money, they don't have volunteers, they don't have an action plan, rather than seeing all the assets that community has.”

She also has experienced certain stereotypes some people of color have about white people. Stereotypes like white people are vegans and don’t let their kids eat sugar. “Nobody on my PTA believed that I had a Costco supply of hot dogs in my freezer!“ she said. She references other stereotypes shared by parents of color on the Integrated Schools podcast, like white parents letting their kids dress like slobs, doing their kids’ homework and not saying “no” enough.

“I can laugh about this because it is an unusual occurrence for me to be racially stereotyped.... I find it instructive to hear these stereotypes and think about ways in which I am guilty of stereotyping others.” she says.

Blanford thinks we need to have a national conversation about what we want our kids to experience when they’re in public schools.

There are already signs of progress. Integrated Schools is starting more chapters around the country and is in conversations with people in South Africa about starting a chapter. Their message has also been received in the corporate world. Zillow, the online real estate company based in Seattle, recently included a disclaimer on its website regarding neighborhood school ratings that use potentially incomplete data and metrics. The disclaimer encourages users to go into schools and meet with teachers and principals.

Blanford is hopeful that by participating in and catalyzing a bigger conversation, people will shift their focus from singularly protecting their kids’ interests to living up to the societal values they claim to espouse.