The county's plan to open quarantine sites in Kent and White Center exposes the fissures already present in our society. 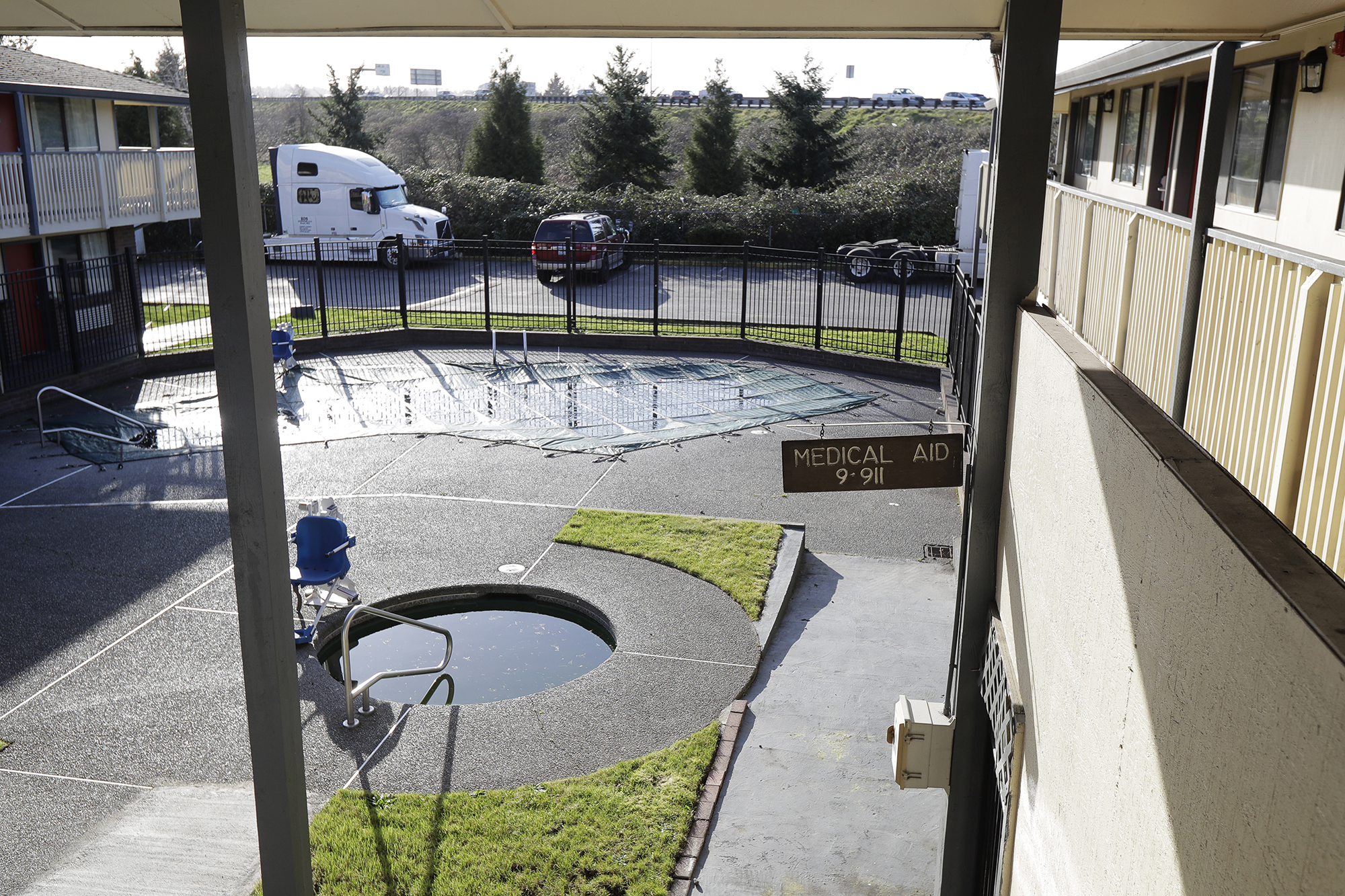 A sign telling guests how to summon medical help in the courtyard area of an Econo Lodge motel in Kent, March 4, 2020. King County Executive Dow Constantine said the county had purchased the 85-bed motel south of Seattle to house patients for recovery and isolation resulting from the COVID-19 coronavirus. (Ted S. Warren/AP)

In these times of COVID-19, it’s bad enough if you’re Asian American or even Asian-presenting. A mere clearing of your throat can send people scattering like pool balls after the break. And then we have to listen to people call us carriers of the “Wuhan” or “Chinese” coronavirus, as if a disease belonged to or was caused by a race of people.

Welcome to Seattle-King County. If you are not white and planning to live in areas with mostly other people of color, be prepared for the following amenities: toxic industrial waste (South Park), flight-path noise and carbon pollution (Beacon Hill), juvenile detention (Squire Park), low levels of public and private investment (Rainier Beach), stress on services and affordable housing (Chinatown-International District) or outright displacement (Central Area).

And whither the people of the Duwamish?

Times of crises merely reveal the fissures that were present all along, and the coronavirus outbreak has shown the region’s leadership to be equal-opportunity dispensers of racial insensitivity.

This is not to diminish the enormity of what is happening here. The uncertain nature of the threat that is unfolding magnifies regular fear of health risk. From outside and even within, it seems like Seattle is Coronavirus Central in the U.S.

Where public health and safety are concerned, acting swiftly and resolutely is a basic expectation. King County Executive Dow Constantine, on March 1, signed a proclamation of emergency, allowing the county to quickly seek sites to isolate people in recovery from the virus. By March 3, the county was wheeling a modular housing unit onto one of its properties in White Center; the next day, it was closing the purchase of an Econo Lodge motel, which would be used to monitor COVID-19 patients less than two miles from Kent’s downtown core.

It’s no deep secret that both White Center and Kent are majority nonwhite communities. White Center, which no longer lives up to its name, has a large Latinx population. Kent is the 10th most diverse city in the country, when also considering linguistic and birthplace diversity.

The rub: The state’s first COVID-19 diagnoses and related deaths occurred in Kirkland, which is overwhelmingly white and wealthy. Never mind that the county has and will continue to introduce quarantine facilities in largely white areas; its first two were in communities of color.

“I am honestly disappointed they chose non-affluent, racially diverse areas for their quarantine sites even though most of the cases are in affluent areas,” Kent City Councilmember Satwinder Kaur, who is Sikh, wrote in an email.

Both communities have pushed back. The city of Kent filed a temporary restraining order that was denied Friday in King County Superior Court. Community members in White Center protesting the county’s nearby isolation facility have circulated an online petition that has attracted more than 15,000 signatures. And yesterday afternoon residents from both communities poured into a King County Council meeting to denounce the quarantine plan. Many lamented the county’s failure to apply a racial equity lens to its decision. But Sili Savusa, the executive director of the White Center Community Development Association, most succinctly summed up the anguish articulated throughout the afternoon. “I come with a heavy heart,” she said, tears in her eyes, before acknowledging the relationship she has with “many layers of the county.”

Neither community complained solely about the racial insensitivity of county officials choosing to site isolation facilities in Kent and White Center (triggering, by the way, echoes of previous and ongoing detention experiences). No, they were more outraged that the county imposed actions on them without consultation or collaboration. "Nobody asked me," Savusa said yesterday. "If one person had just come to me and said, ‘Sili, this is coming down the pike, we need some community input’ … We could’ve figured something out.” The encumbrances also arrived amid a general panic in the region, exacerbated in Kent and White Center by language barriers in their large immigrant communities. When the communities complained about what has been a historic pattern of noncommunication and lack of cooperation, they were then portrayed as unwilling to do their part in a crisis — something that looks a lot like the juxtaposition of victims as scapegoats.

“I am all for supporting our neighbors in their time of need,” Kaur said. “[But] we have populations who don’t understand what is happening with the COVID-19 virus. There are language barriers, and these residents are already scared for themselves and their families. On top of that, we are going to have a voluntary quarantine facility.

“This has caused real fear and panic in our community. I wish King County had done a better job of communicating and engaging our residents.”

State Sen. Joe Nguyen, a Democrat whose district includes White Center, said he understood that the facilities did not increase risk in his community. He was concerned about the mere 30-minutes notice he received, noting that White Center, being unincorporated and lacking a council, is even more underrepresented than most communities of color. He was told that his pushback risked causing more of a panic among his constituents.

“One of the reasons why I ran for office is because of this,” Nguyen said in a phone interview. “This is not a new thing for White Center.

“You need to make sure folks in the community know it’s coming in and understand the thought process behind it before you announce it. I’m sure they’d do it for Medina [a wealthy neighborhood on the eastern edge of Lake Washington].

“I knew that when that happened without proper communication, without proper notification, everybody in White Center was going to feel that way,” Nguyen added. “If I didn't say anything, they would have felt left behind and ignored. I didn't want to push back on the quarantine site, but I wanted to let folks know that, ‘Hey, look, I see you. I hear you. And we're going to work on this,’ because I did not feel that that was the case.”

Alex Fryer, director of communications of King County’s Office of the Executive, conceded that the communities were notified “simultaneously or just after final decisions and deals were made.”

Fryer also wrote in an email: “We always take into account how government decisions are perceived in a community, but responding immediately to the current health emergency took precedence.”

It should not be lost that “emergency powers” have served as cover for many of our country’s greatest government-sanctioned atrocities against people of color. We recently observed Day of Remembrance in the Japanese American community, recalling the World War II mass incarceration triggered by the pen of President Franklin D. Roosevelt.

And the hits keep coming under Donald Trump, whose response to emergencies, both real and imagined, have justified the Muslim ban, family separation, the border wall and indefinite detention of undocumented migrants.

King County is not committing an atrocity with its quarantine response. But the terrible racial optics of it all reinforces historic messages that people of color aren’t just invisible, we’re expendable. Haste in a crisis cannot justify even the implicit acceptance that communities of color serve as repositories of the greater (read: white) society’s undesired refuse. If that’s not the intention, the rationale must be explained in convincing fashion, on the basis of mutual trust and respect.

“After this is all done, and after we've rectified this this issue, I do expect to have a discussion with King County and the city and everybody else,” Nguyen said. “We need to talk about how certain communities have been underrepresented for a long time and need to be included in the conversation.”

In the end, among the most lasting symptoms of COVID-19 will be the layers of inequity it exposed in our society — who has the privilege of working remotely, the ability to deal with school closures or take time off with illnesses, or access to health care and clear communication about the threat we’re all facing and how to deal with it.

A simple heads-up that a government decision will impact us and our communities can go a long way. Although such communication may not win our approval, it may gain our understanding. Such a gesture could even be interpreted as a sign that things may finally change.